Number 4979 Wootton Hall is one of an illustrious line of named locomotives of the Great Western Railway. Read its history.

The class was the standard mixed traffic design on the GWR, handling express passenger and heavy goods trains. As befits a jack-of-all-trades, it had a varied career with the Great Western and British Railways (Western Region), serving in the West Country, the Midlands, South Wales, London and Oxford. It is seen here in a photo by Eric Scholefield, at Bristol Temple Meads station in the early 1950s, when Mr Scholefield was a photographer with the Royal Air Force.

Wootton Hall came into Furness Railway Trust ownership in 1994, when members heard it was up for sale. There had been a feeling that our fleet lacked a large tender engine, and this purchase filled that gap. 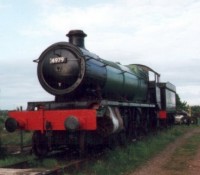 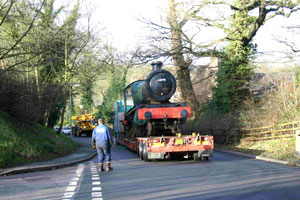 For the first twelve and a half years in FRT ownership, the locomotive was stored at the Lytham Motive Power Museum - having passed along Blackpool Promenade en route from its previous home at Fleetwood!

However, in March 2007 it was moved to a new storage site at the Appleby Heritage Centre, where it now resides right alongside the Settle to Carlisle Railway Line! Much of the cost of the move was sponsored by the Lytham Motive Power Museum, which has aspirations to reopen in the future. 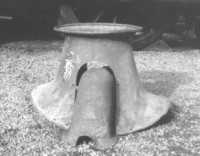 Having had to take its place in the restoration queue behind first Furness Railway Number 20, and then its fellow Swindon stablemate, GWR 0-6-2T 5643, whilst at Appleby, a small team, led by Keith Brewer, has continued to visit Wootton Hall to carry out preventative maintenance. The opportunity has also been taken to purchase items when funds or opportunity allow. This is a sensible policy: many items found on Great Western Railway engines were standardised, and so it was sometimes possible to get something for Wootton Hall at the same time as purchasing a similar part for 5643, for less than we would have to pay were we to order the two fittings separately. We have also kept our eyes open for other one offs: for example, the FRT has obtained this original GWR safety valve bonnet and clack valve cover from a local collector.

Most of the cab fittings, apart from the brake valve and lubrication control valve, have now been obtained. These items have been paid for by small donations and the collection box attached to the locomotive at Appleby, for which the Trust is very grateful. A steam fountain, blower valve and steam lance valve have been manufactured in Gloucester and are now in safe storage. Other purchases include the air pump lubricator bottle, two pepper pot valves for the vacuum system, some cylinder drain tap cocks, and two whistle mountings.

A quantity of steel bar has been bought at Preston to manufacture oil feeders and parts for the safety valve – these are jobs that can be undertaken in the RSR workshop.

Prices are being sought for some of the smaller valves in the cab and around the cylinder block.

A new solid copper top to the chimney is being made - to replace the copper plated steel original which has understandably rusted away. A similar copper cap already adorns the chimney of 5643.

Wootton Hall was moved to the FRT's new workshop at the Ribble Steam Railway in October 2014. Immediately work began to remove the badly wasted tank and coal space of the tender; a replacement will be built in due course. It is intended to overhaul the tender first, which can then be made available for hire, whilst attention turns to the locomotive itself.