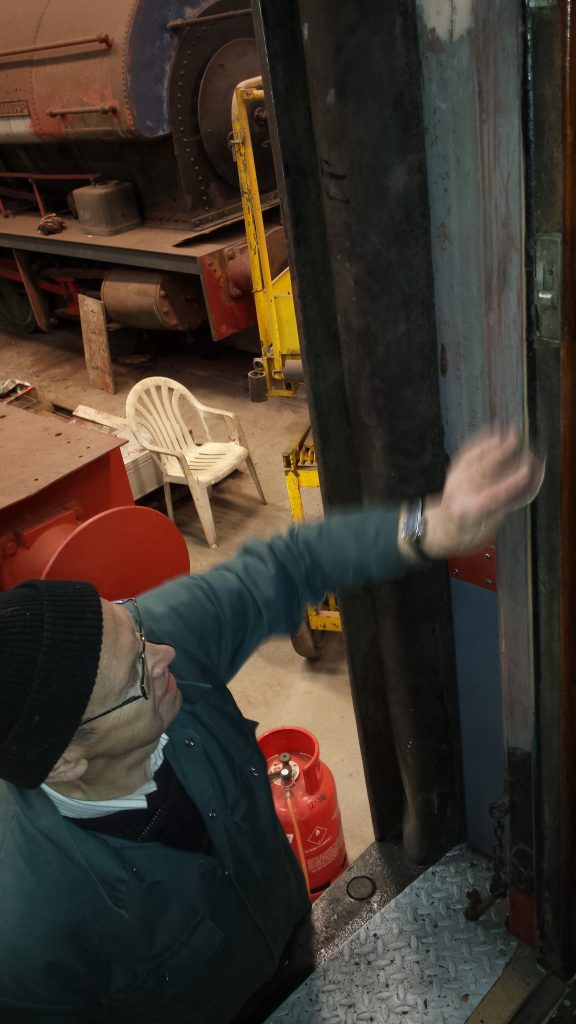 It was a quieter day at Preston on Wednesday with Alan braving the snow to go to Shildon once the snow gates on the A66 had been lifted. Tim was also away which left John working away sanding gangway metalwork at the east end of the RMB whilst Mike continued the reassembly of the toilets. 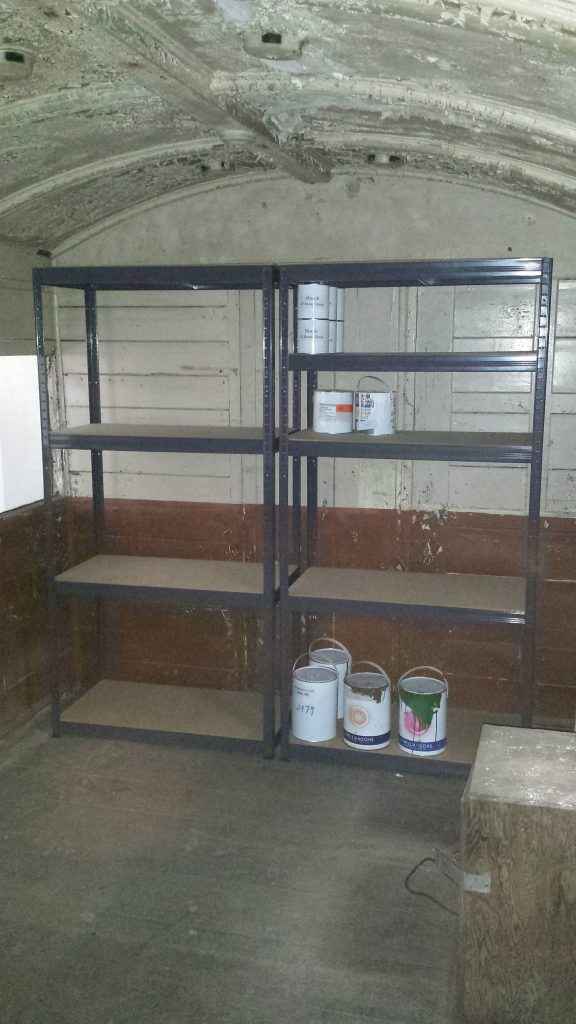 David has now finished the assembly of the new shelving in the first class North London Railway coach body and he and Tim spent some time on Saturday stacking paint cans and other C&W consumables from the interior of the RMB. 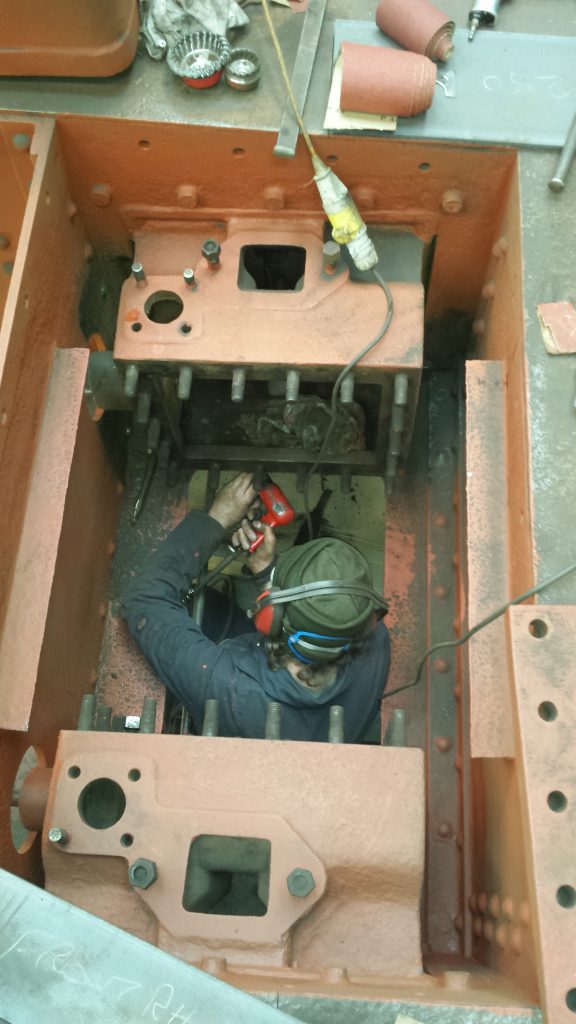 However, Adrian broke the silence in the shed with the needlegun around Caliban‘s valve chest. 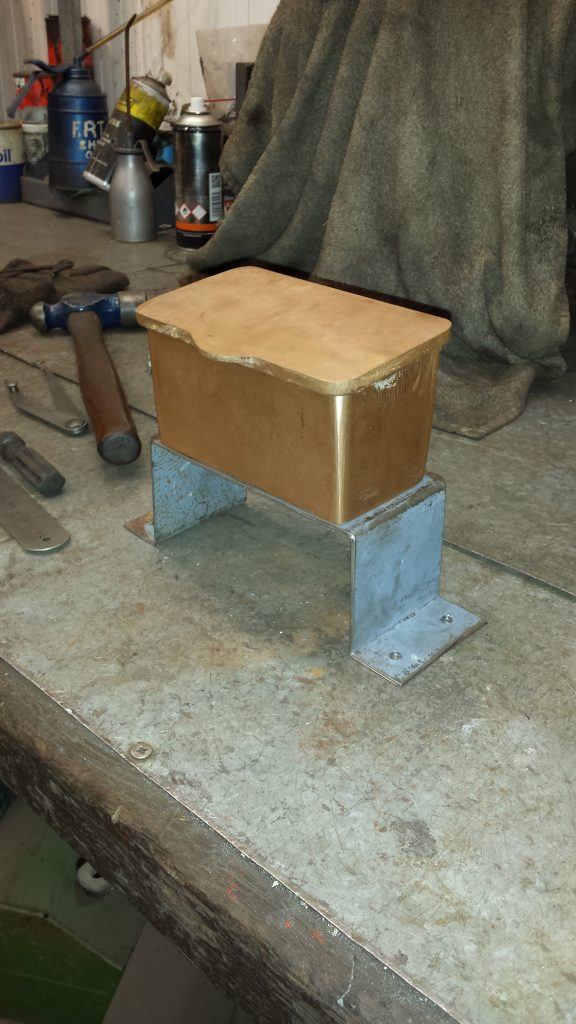 Howard is still busy with Caliban‘s new lubrication boxes, making stands for them, and happy that his precious knife and fork survived the fall of the North London Carriage door on his tool box last week, which didn’t fare as well. 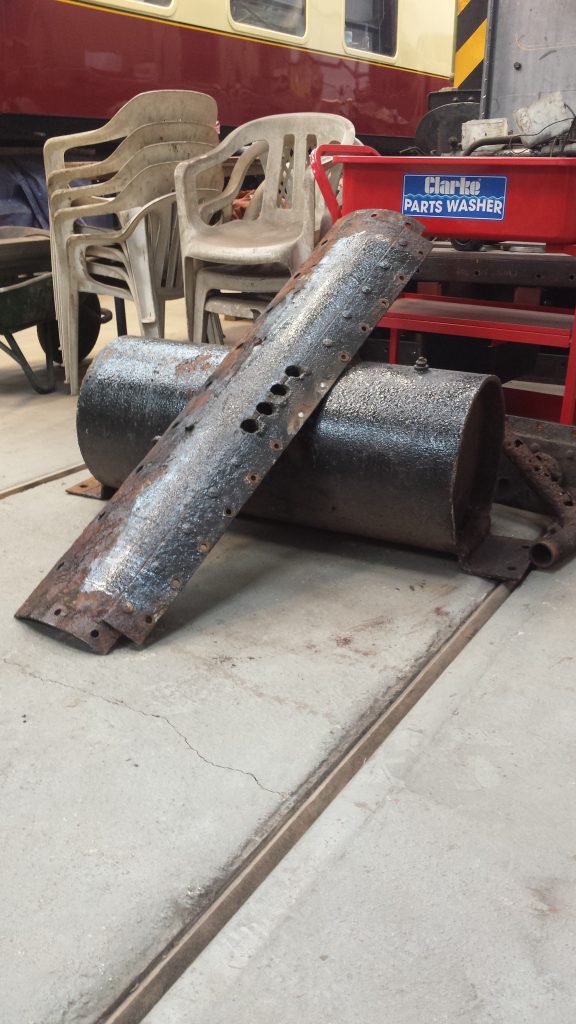 Keith has been removing more platework and also the vacuum reservoir from Wootton Hall in readiness for Fred and Roger to clean and apply primer paint. 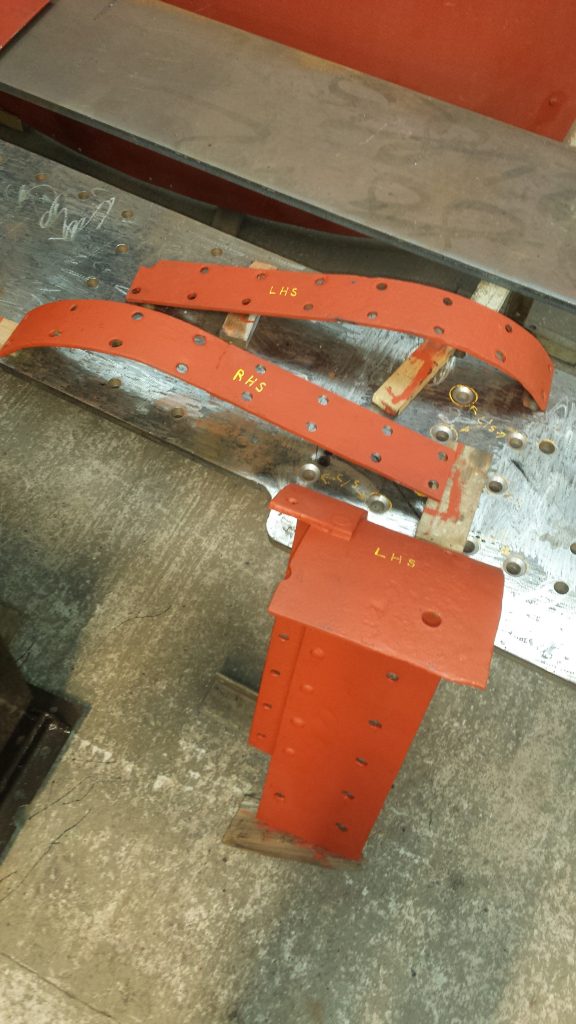 Alan and Alison had good weather up at Shildon over the weekend and Alan and Tim were successfully re-assessed for driving there on Thursday and Friday. 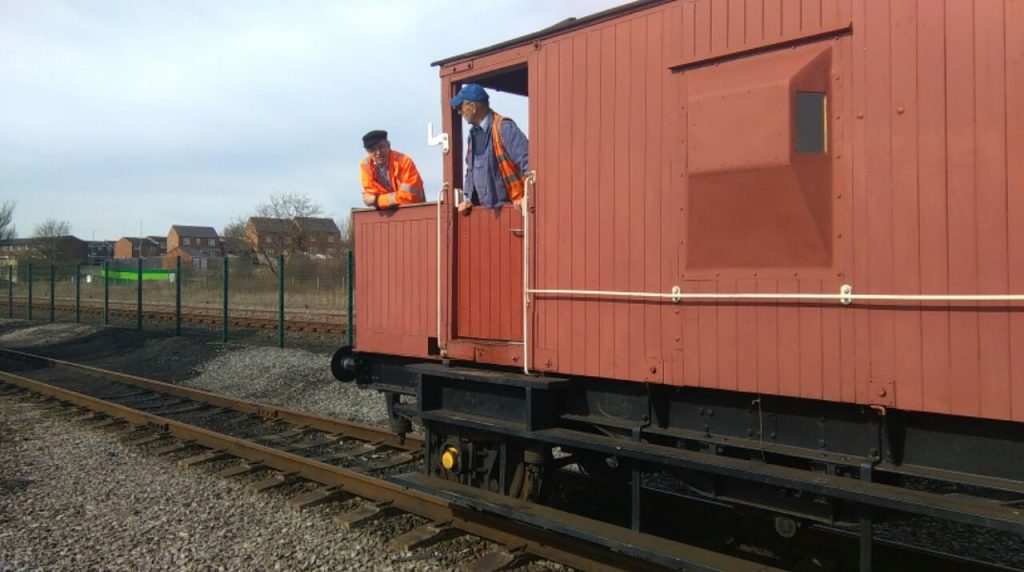 Alan is seen here on the footplate on Thursday whilst Tim is seen acting as guard with Martin Clark on Friday whilst Anthony Coulls is assessed. 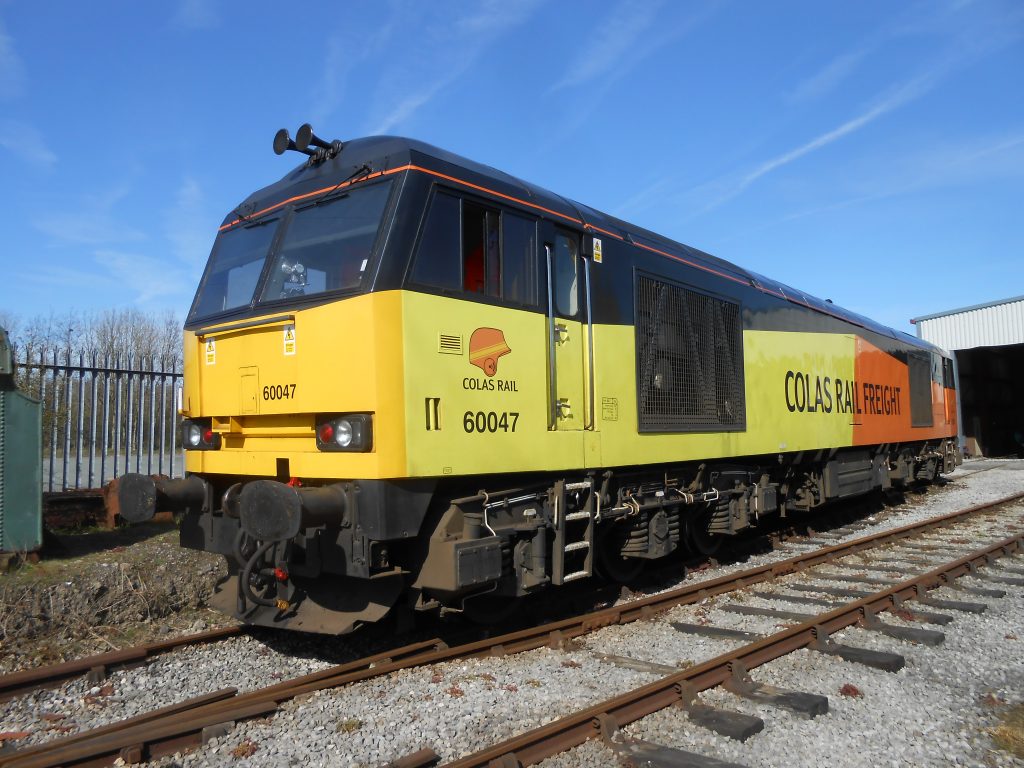 The Ribble Steam Railway’s Diesel gala took place over last Saturday and Sunday and the photo of visiting Colas locomotive 60047 shows it outside the RSR running shed during the driver’s lunch break on Saturday. This next weekend will see the RSR’s Steam Gala with four engines in steam, which will keep Keith, Alan and Tim busy.

A first reminder here that the final Preston Branch meeting of this season will take place at 8 pm on Tuesday evening, 11th April, at The Ale Emporium, Preston. No doubt more steamy videos to watch.

This week we start by reporting the passing of our 110 volt Makita hand drill, which was purchased as long ago at 2001. Sixteen years of hard use can’t be bad and, after some discussion about the characteristics required of its successor,  it has been replaced by a new, slightly more powerful, Makita drill which arrived on Friday. We look forward to another sixteen years of productive use….. 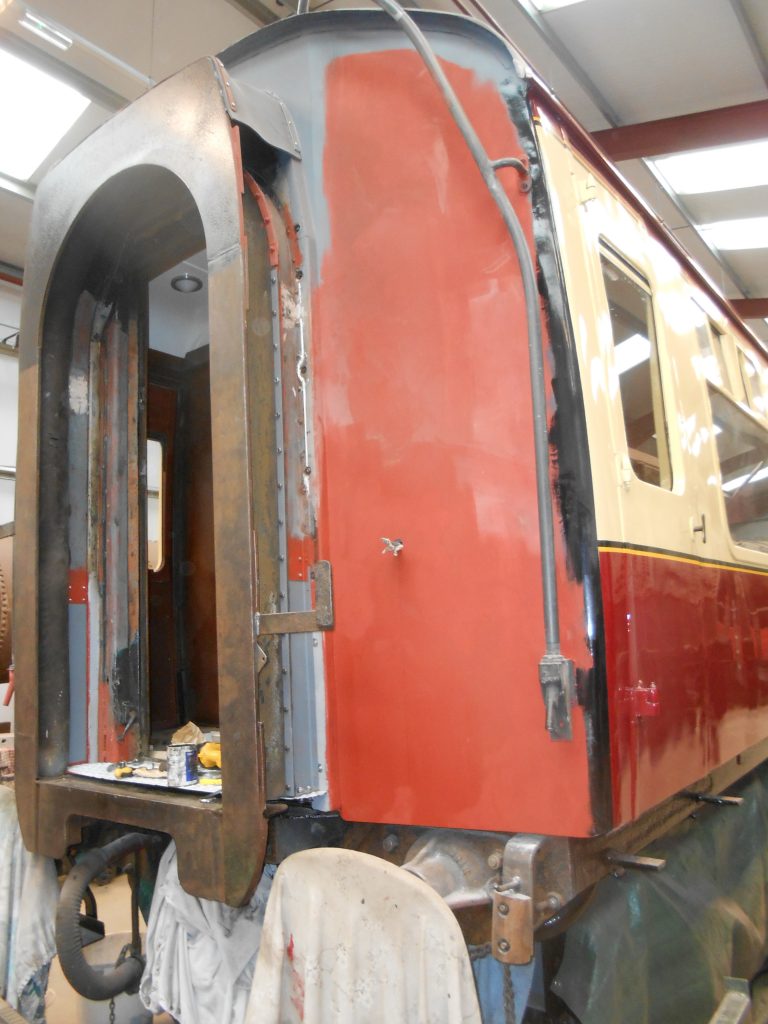 The seemingly never ending work on the RMB continued again this week. John has just about finished his endeavours at the east end of the coach and it is seen here ready for the final coats of paint – the view rather belies the amount of work that John has put in to bring the metalwork back up to standard. John is aiming to get around to the west end next week in order to re-instate the passenger operated brake mechanism, otherwise known as the communication cord. This will enable the panelling on the south side toilet to be completed after the communication cord has been permanently re-attached to the frame of the coach. 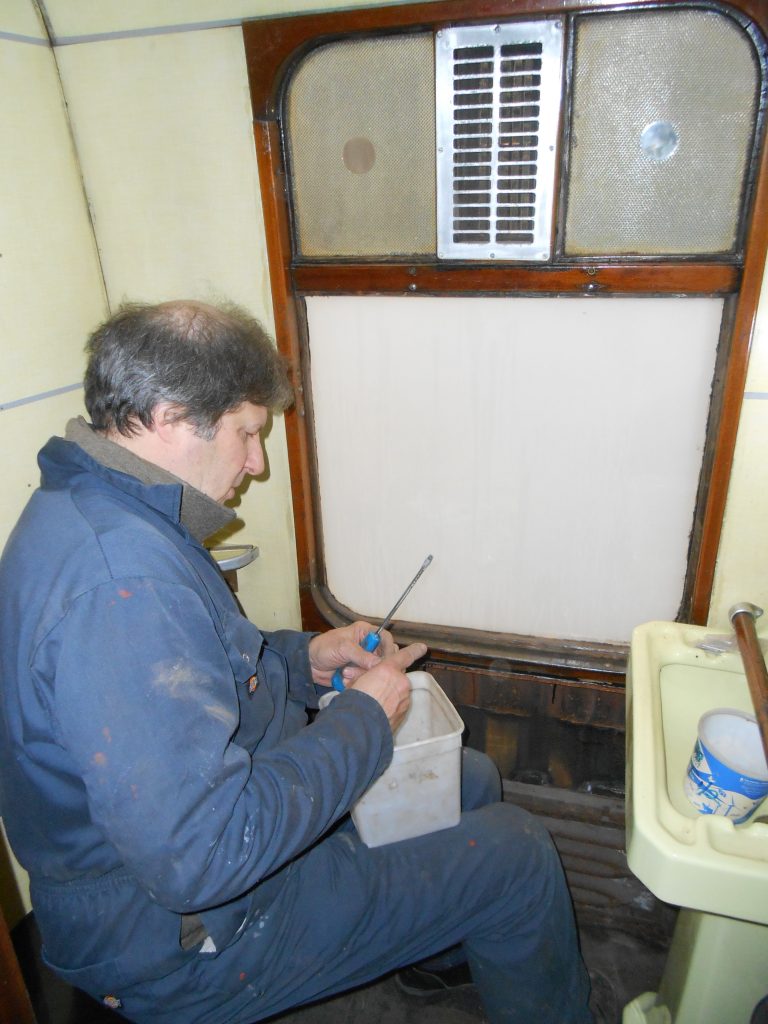 Mike Rigg has been busy completing the re-installation of fittings in the north side toilet and can be seen here contemplating his next move. 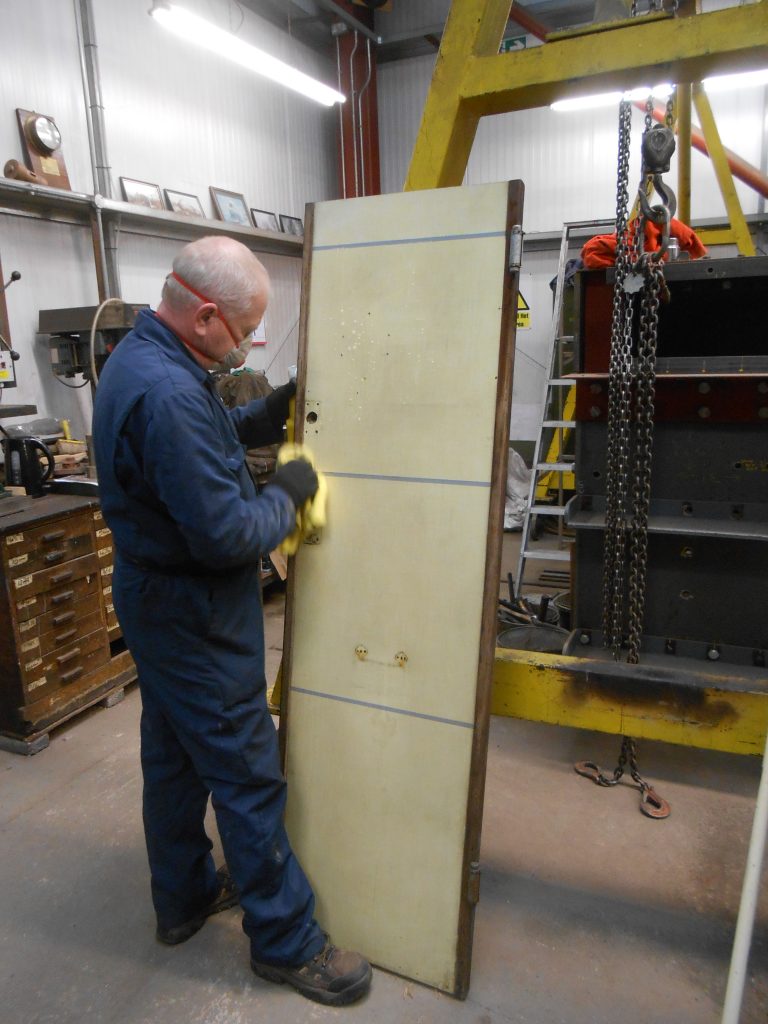 Paul is seen cleaning the door ready for fitting. 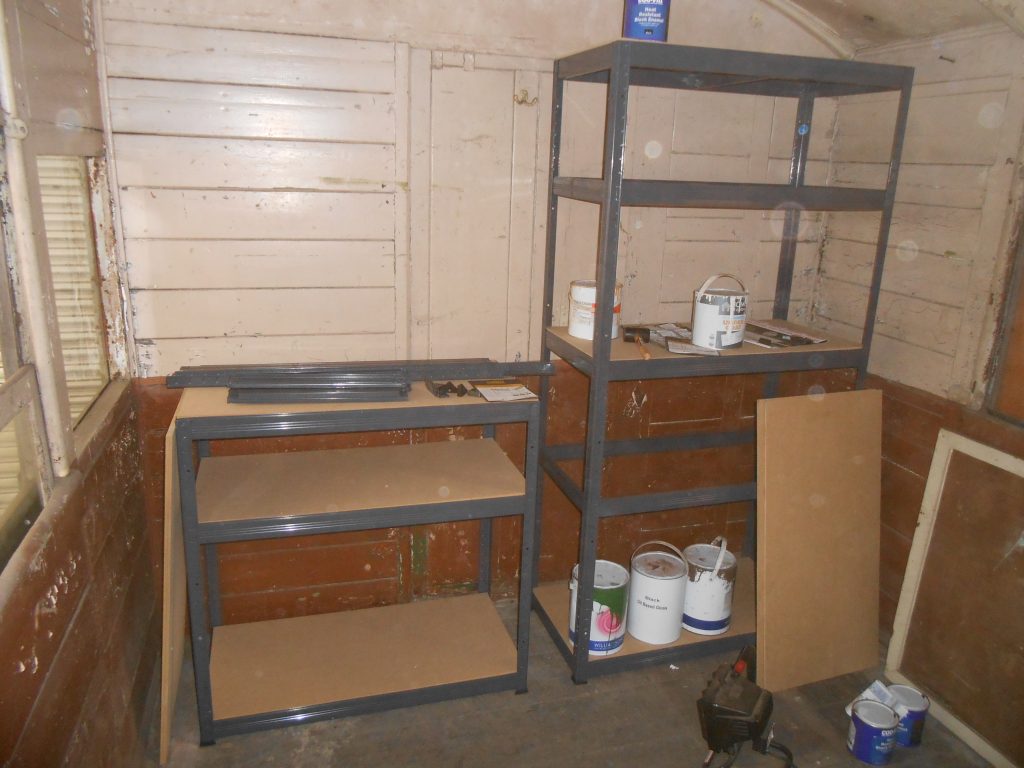 With a need to start emptying the RMB, which has acted as a store in recent years, David has been erecting the shelving, kindly donated by Michael Cook, in the first class North London Railway coach body. It is seen here in partially constructed condition. David has now finished the job and some of the equipment has already been moved over. However, at Adrian’s suggestion, David took it upon himself to clean the windows of our new store so that we can see our way around only to find that most of the muck removed was Adrian’s dust! Just need now to replace the exterior door which fell off on Saturday..

Adrian continues to create that cloud of dust above Caliban as he cleans up the frames with both needle gun and cup wire brush. 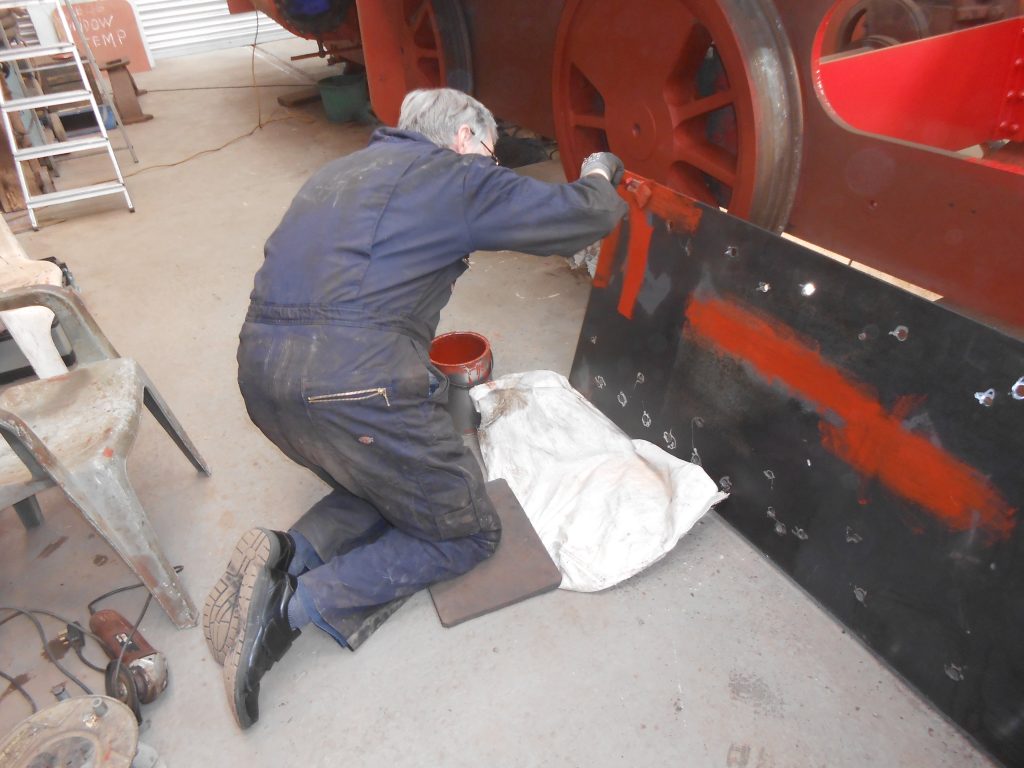 Alan is seen here with paint brush in hand putting red oxide on what will be the underside of the new piece of Caliban‘s running board after having received tips of the trade on painting from none other than Adrian! Some grey undercoat was subsequently applied on Friday by the C&W team.

Work has also continued on Wootton Hall where some of the firebox back head cladding has been attached in order to mount some of the fittings temporarily on a test basis. 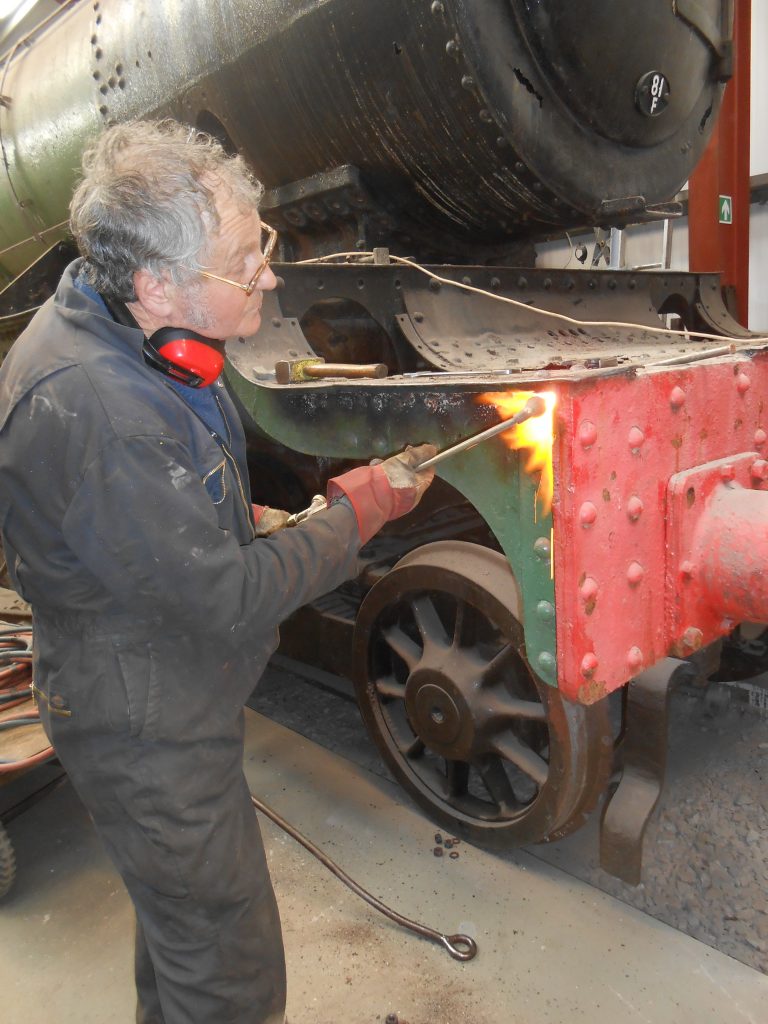 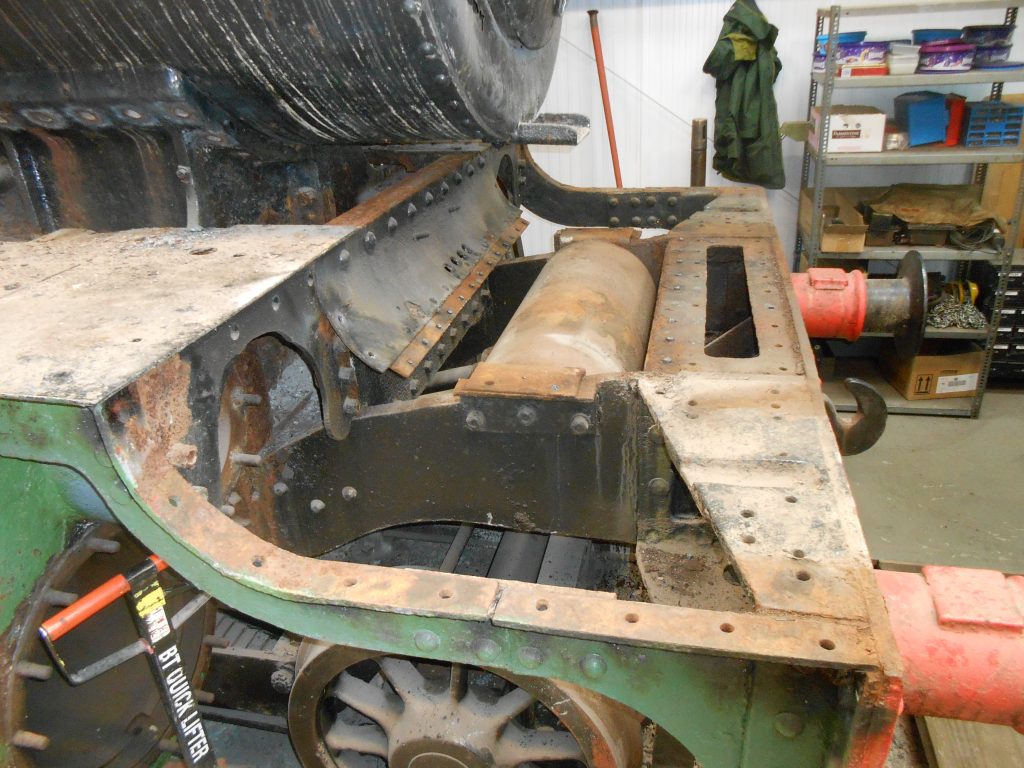 Keith has also removed some of the engine’s platework adjacent to the front bufferbeam so that it can be cleaned up and painted. 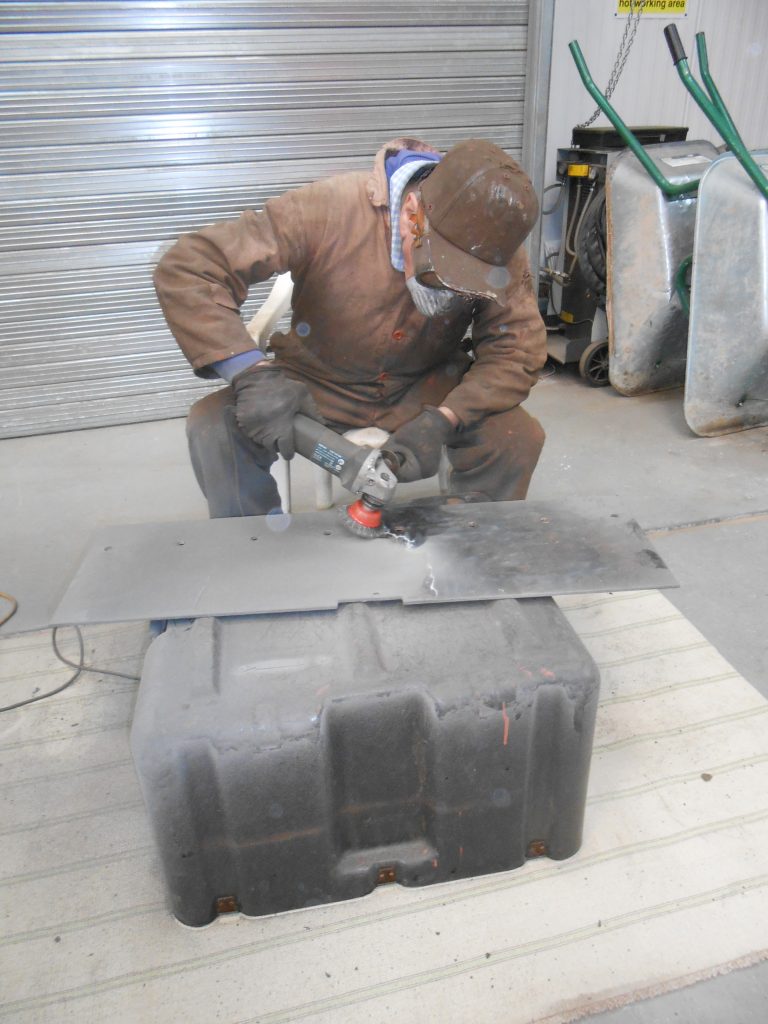 Fred took on the challenge of wire brushing the plate on Friday and can be seen at work here.

This next weekend sees the opening event in the RSR’s operating calendar with the Diesel Gala on the 25th and 26th. A Colas locomotive is due to attend on the Saturday.

Over the Pennines, Alan will be looking after FR 20 during four days of steaming, starting on Thursday for two days of driver assessments (Tim also attending Friday) and then two days in traffic. 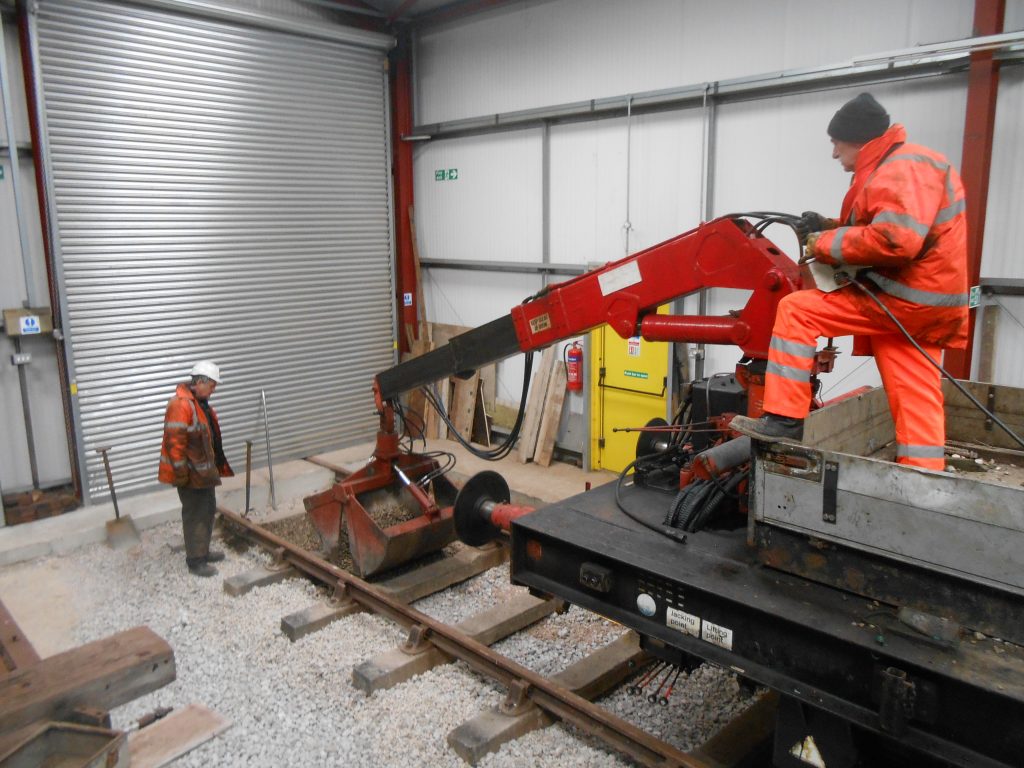 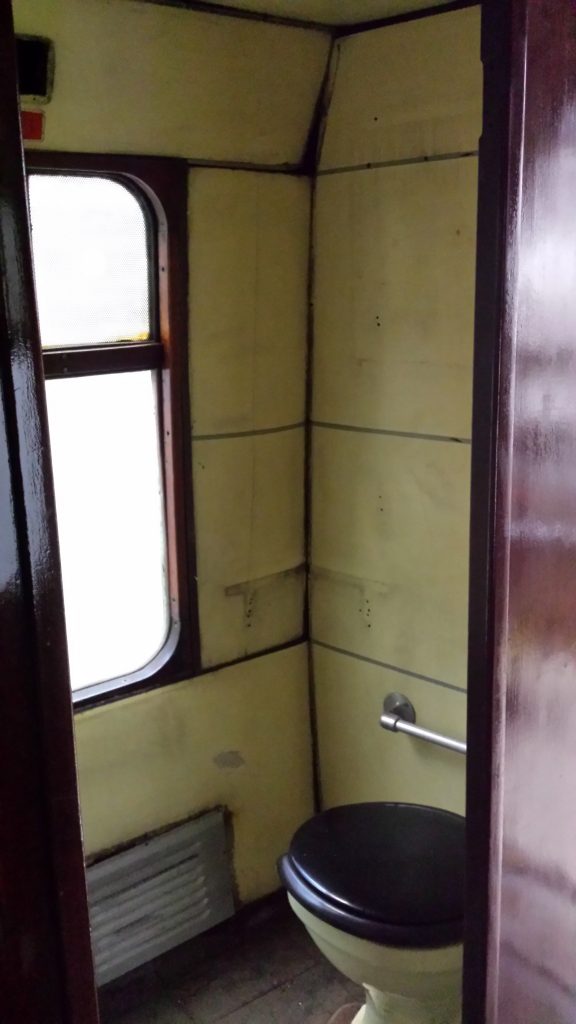 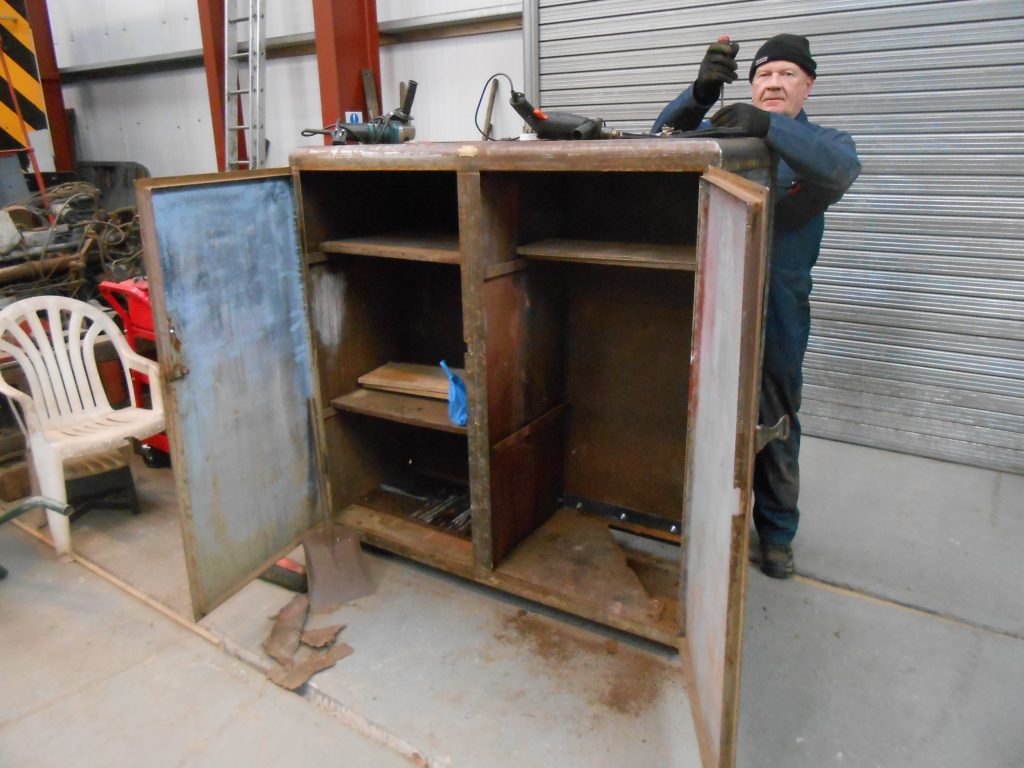 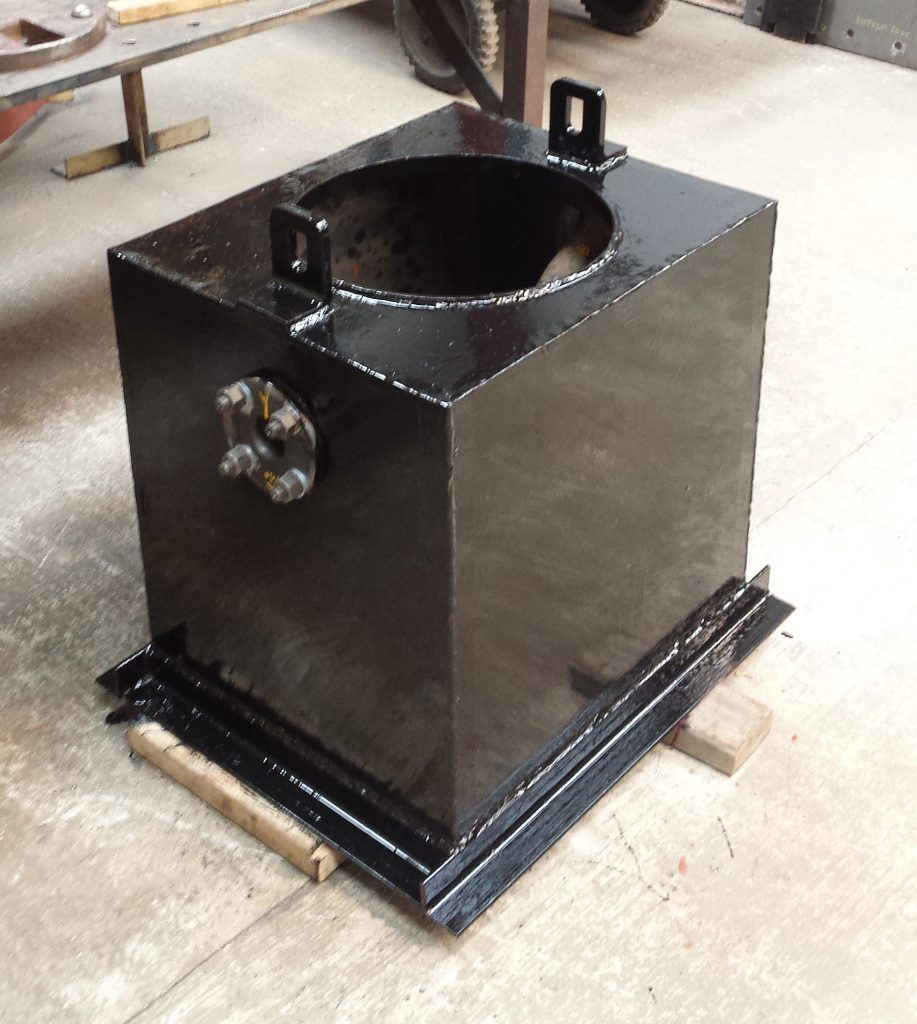 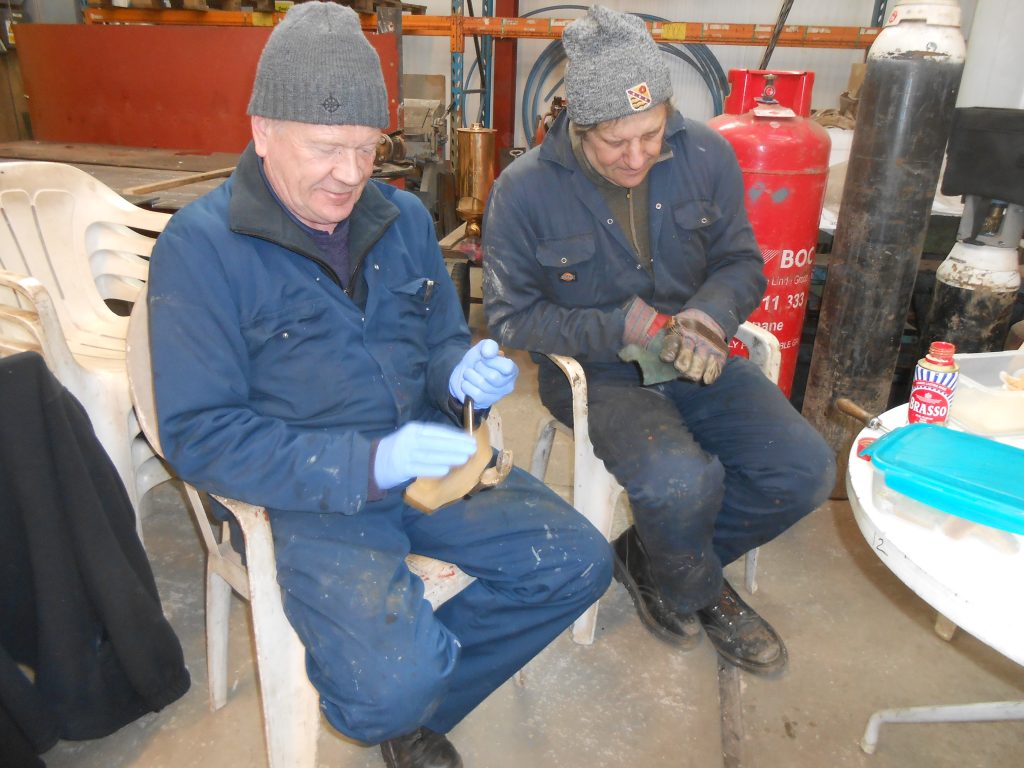 Mike and Tim finished cleaning the windows on the RMB last Wednesday and Mike and Paul are seen here making a start on cleaning up the brass handles ready for fitting. 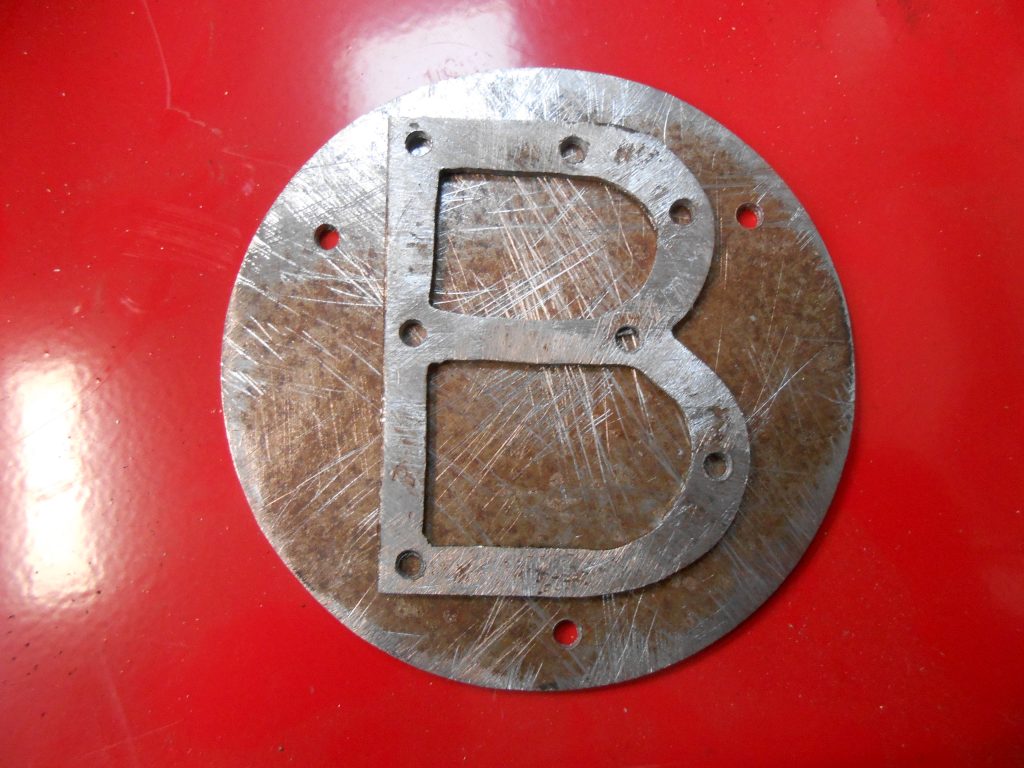 Paul has also been filing the new letter B for the gas compartment cover. 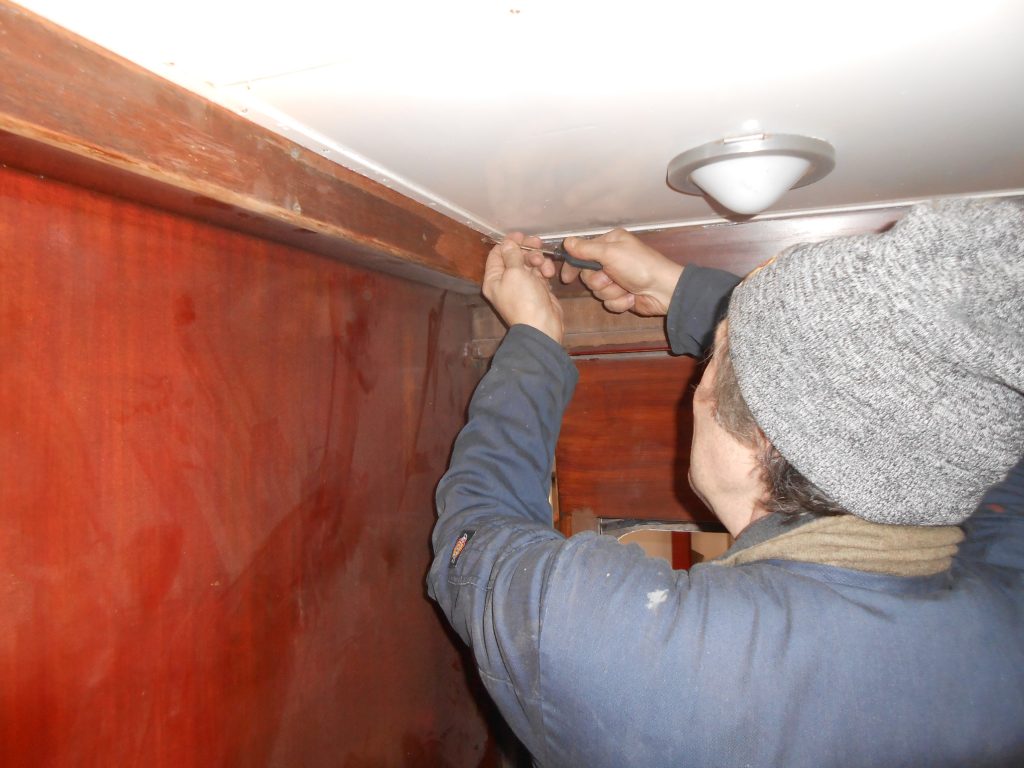 The temporary absence of Tom and Trevor has been felt in that it is now time to re-assemble the internal panelling and Mike started the work by cleaning down the various components in the south side toilet – not a job to be relished. He is seen here re-installing a pelmet for one of the saloon compartment doors.

The dust curfew is definitely over, with Adrian creating both noise and dust with the needle gun and cup wire brush on Wednesday as he worked on Caliban‘s frames. Adrian has also recently celebrated a birthday and duly arranged for Alison to bake some cakes to share on Wednesday – this run of birthday cakes isn’t doing productivity in the afternoon any good! 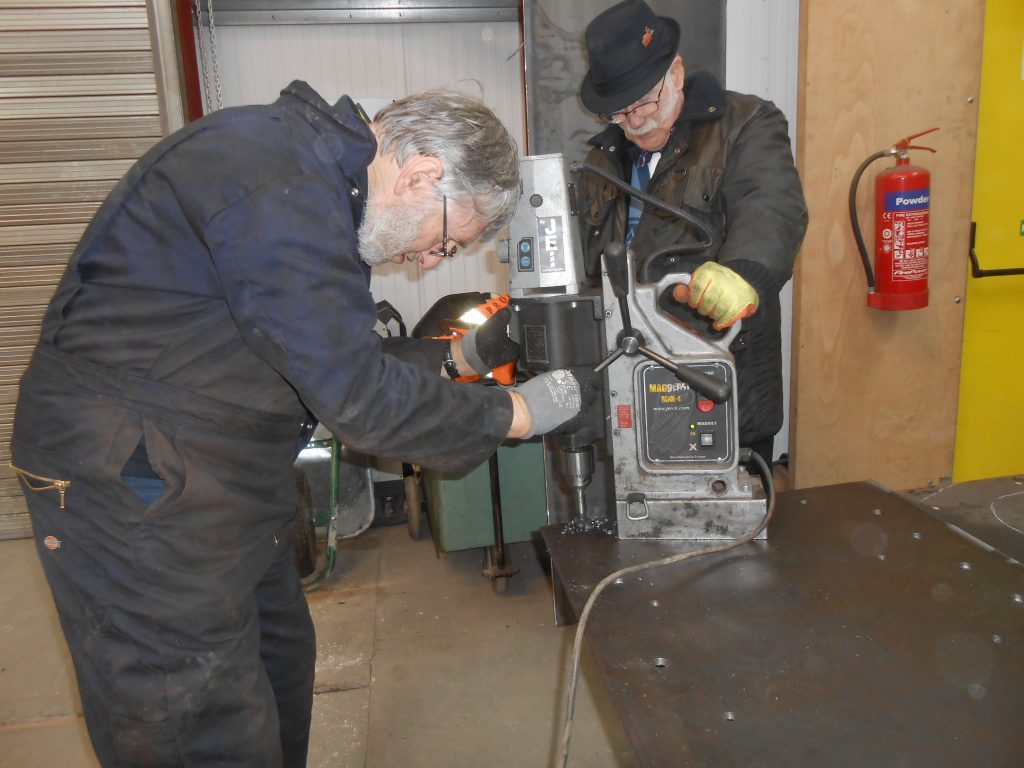 Alan continued to drill holes in the new piece of running board. We refrained from including yet more photos of Fred and Roger at work on Caliban‘s wheels although it can be reported that they have recently changed sides! 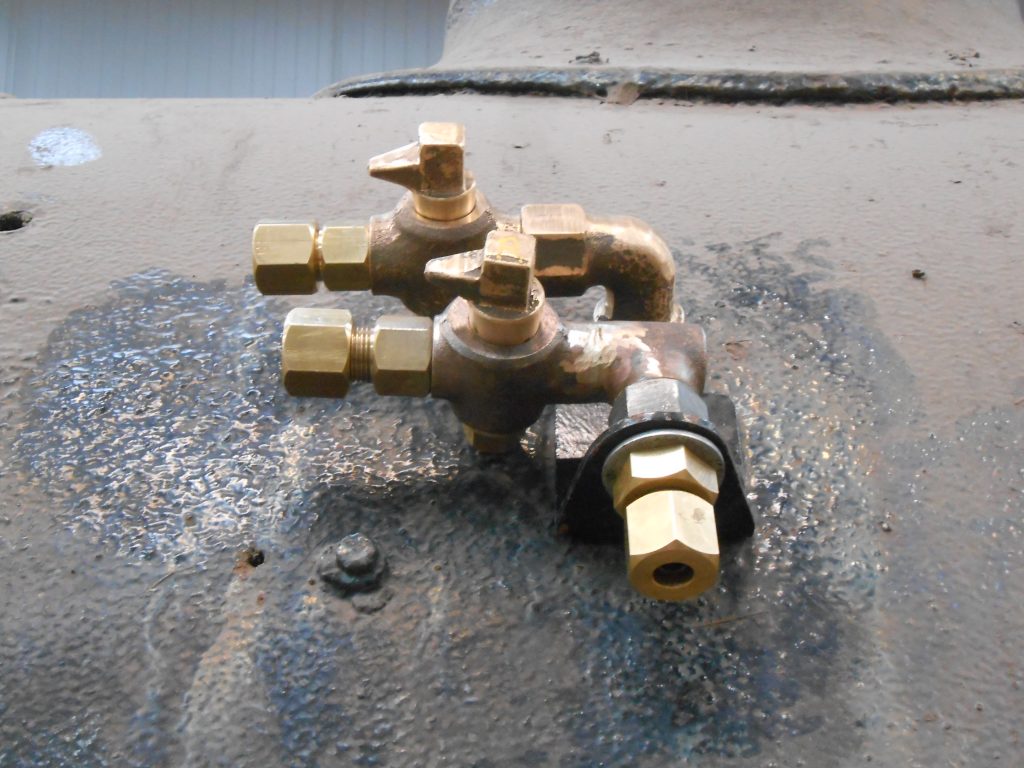 Keith reports to us that the track on road four of the unheated part of the shed has now been levelled and awaits some more ballast and crush and run filling in readiness for concreting. There may still be a need to level some of the track on road three, so there is a potential stay of execution before we all have to start wheeling heavy wheelbarrows of concrete around the shed.

News from The Battlefield Line is that Cumbria is expected to undergo its annual cold exam for the boiler surveyor next week. One of the clacks is being refurbished and the big ends are being taken down for white metalling before it goes back into service at Easter.

Latest local transport news – for those wanting to travel to the FRT’s home at the Ribble Steam Railway from Preston station and wishing to forego the ten minutes walk from McDonalds, there is good news in that there is now almost an hourly 75/75A service from the station, commencing at 07.10, then 09.25 and 25 minutes past the hour until it starts to vary at 16.31, Mondays to Fridays. On Saturdays it is 07.25, 09.25 and then 25 minutes past the hour until 17.40.