It’s Mid-summer’s Day already – where has the time gone?

Work on Furness Railway No. 20 continues to progress with another pipe wrestling session taking place last Wednesday in an effort to complete the engine’s vacuum pipe system. The was much discussion about elbows and offsets with the conclusion that we had one elbow too many and an ‘S’ bend in the main pipe too few! 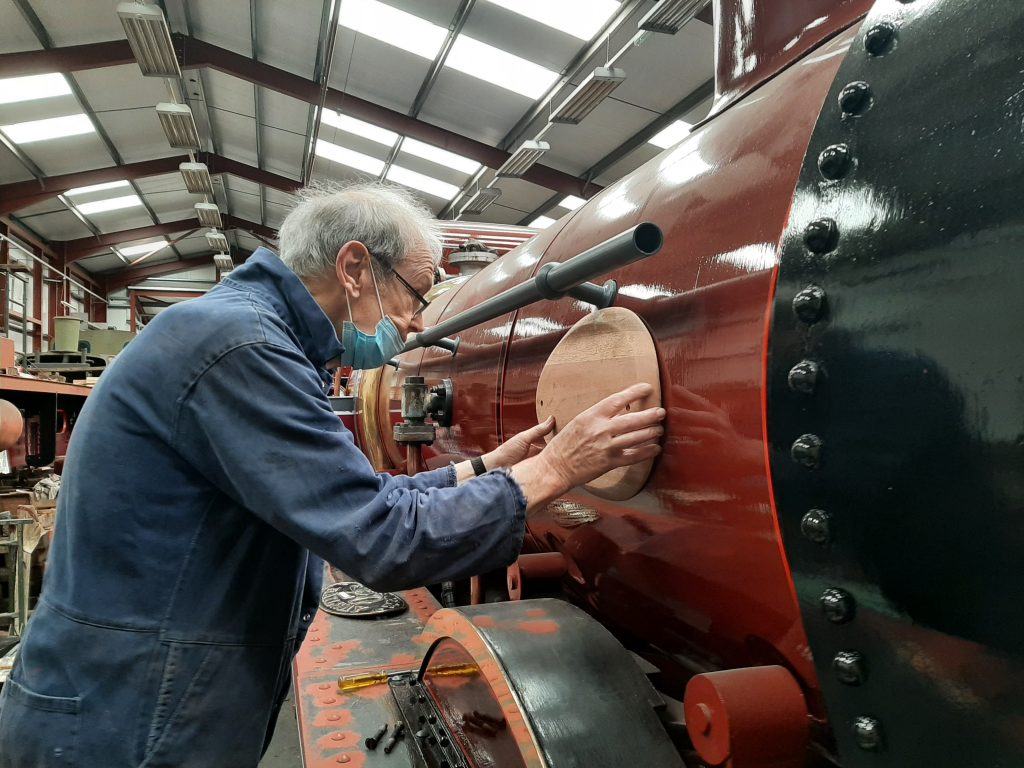 John Dixon arrived to see whether his homework, a new wooden pattress for one of FR 20’s numberplates, would pass the test – the previous pattress had succumbed to rot on the lower side. The result looked pretty good to us! 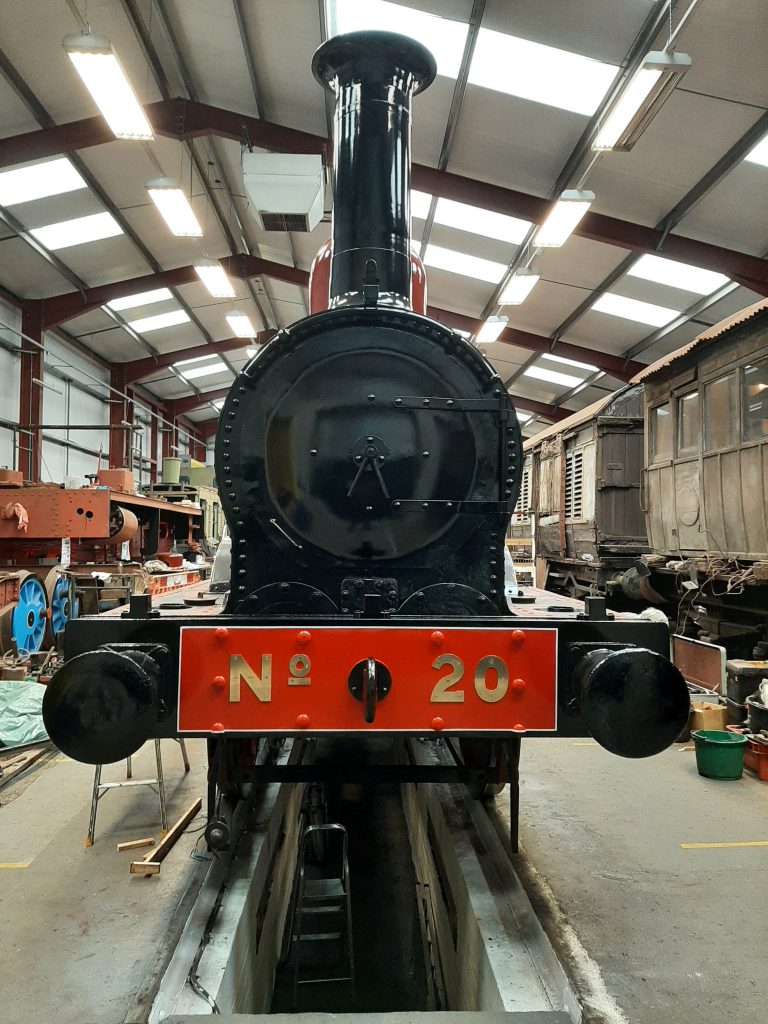 The painting of the front of the engine has now been completed and Ron and Tim polished and fitted the brass letters and numbers on to the buffer beam. 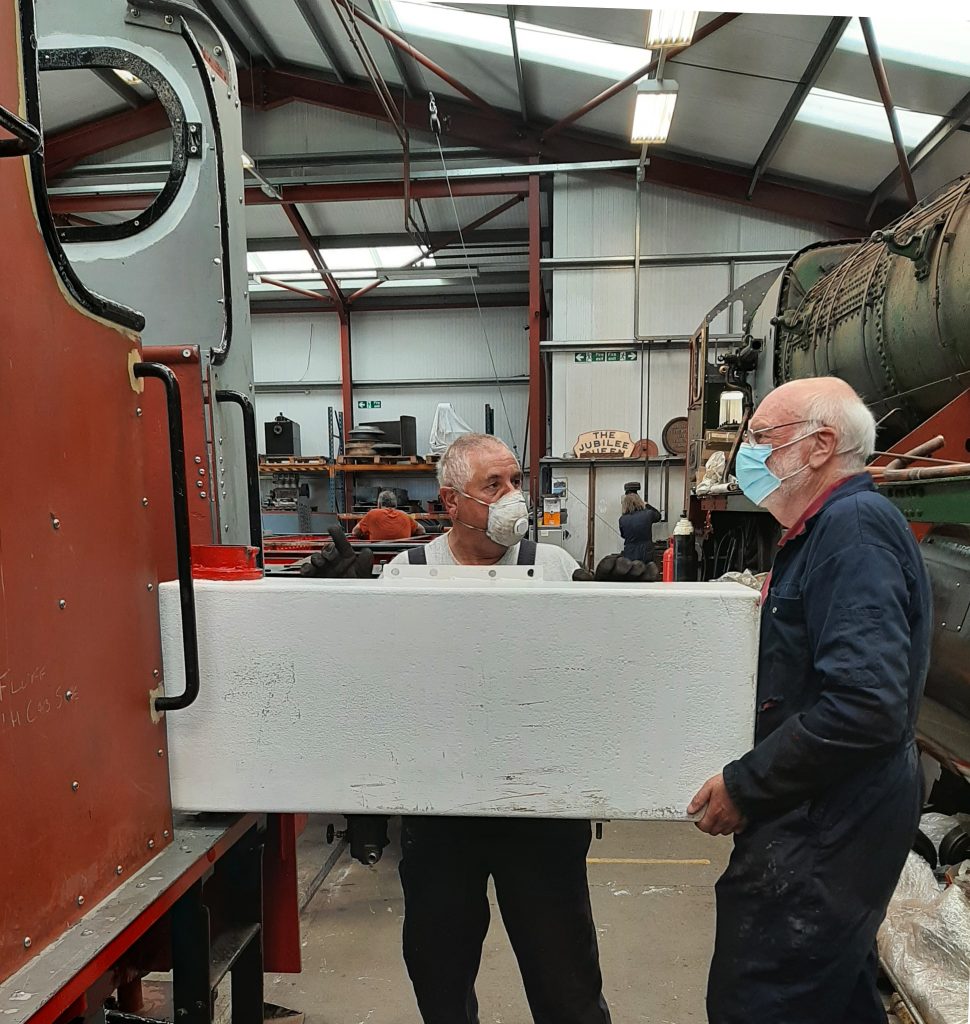 The Fluff team reached the stage where they needed to refit the fuel tank and John Davis and Phil are seen here loading it into the cab.

Most of the brake gear has now been fitted on to Wootton Hall‘s tender with just a few items still in production in the machine shop.

Alan, Ade and Tim headed over to Embsay on Friday to work on Cumbria‘s injectors which had been giving trouble. As previously described, a water leak into the dry steam pipe to the fireman’s side injector had been identified and it was decided to remove the associated clack box so that the pipe could be examined with an endoscope. The clack box had not been removed from the backhead of the firebox since it was fitted at the last overhaul and it proved resistant to most forms of persuasion to remove it. It was nearly three hours later that the nuts had been removed either through heat or had snapped off leaving all six studs requiring replacement. Even when the nuts had been removed, the clack box stubbornly refused  to move until attacked with wedges driven between it and the backhead. Lunch was then taken around 3pm. After blanking off the delivery pipe on the backhead, the boiler was then topped up to reveal small traces of water leaking between the outside of the dry pipe and the backhead. This was the answer to the problem that we had been hoping for, as no one fancied having to renew a dry pipe. Once a set of tube expanders had been applied the water leak stopped. We now need six new studs and to clean up the surface of the clack box where it fits on to the backhead before refitting.

There wasn’t time to fit the new set of cones that had been purchased for the fireman’s side injector, but it was possible to extract the handbrake shaft through the cab roof so that it could be taken back to Preston for attention. By then it was 6.30 and time to wrap up and go home. Needless to say, volunteers to assist for the next visit to Embsay will be very much welcomed!