Yet another busy week has passed by – well we don’t really want too many quiet times, but the occasional rest would be useful…!

5643 passed its cold inspection with the boiler surveyor on  Thursday, and Keith and George were planning to head over to Embsay yesterday (Sunday) to refit the safety valves, washout plugs and mudhole doors. 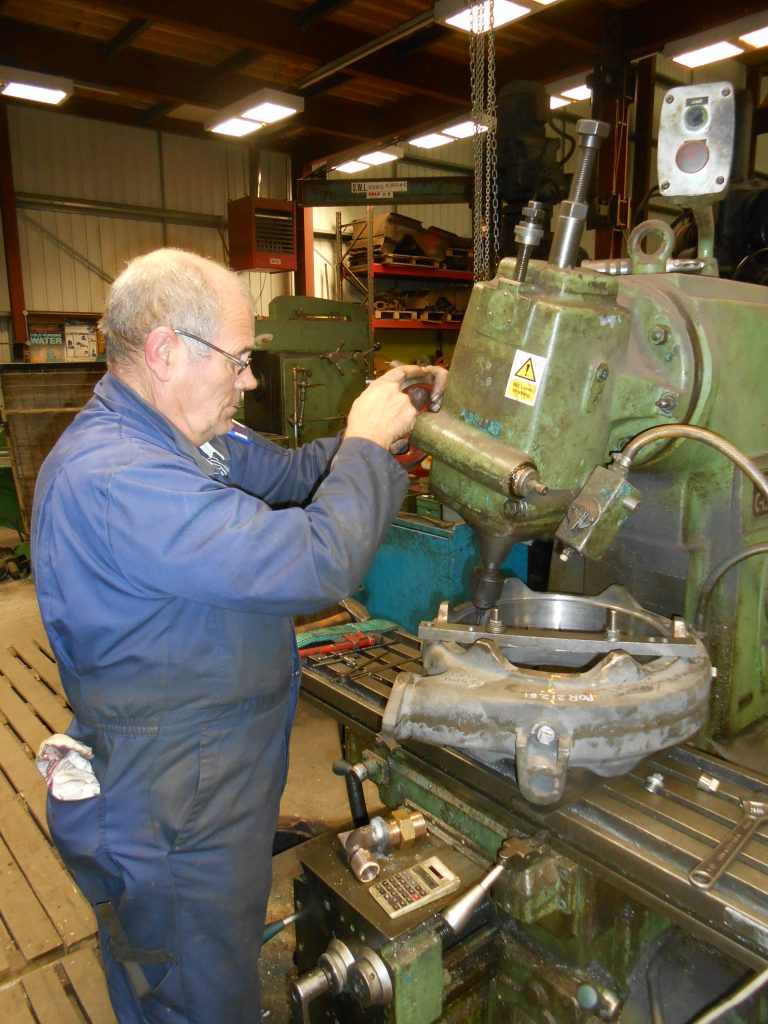 Meanwhile, Steve Shearing has been spending many hours in the workshop at Preston machining the new blower ring and elbow in readiness for fitting before the steam test. This has been quite a challenge to accomplish in time and it is hoped that it will be ready to fit on Wednesday before the fire is lit! A steam test has been scheduled for Thursday afternoon after which a new brick arch will have to be fitted before the loco leaves Embsay on Monday morning for its visit to the Bo’ness & Kinneil Railway over the following two weekends.

The RMB has been spending its last week in the heated part of the shed as a move into the unheated part has been arranged for today, Monday. 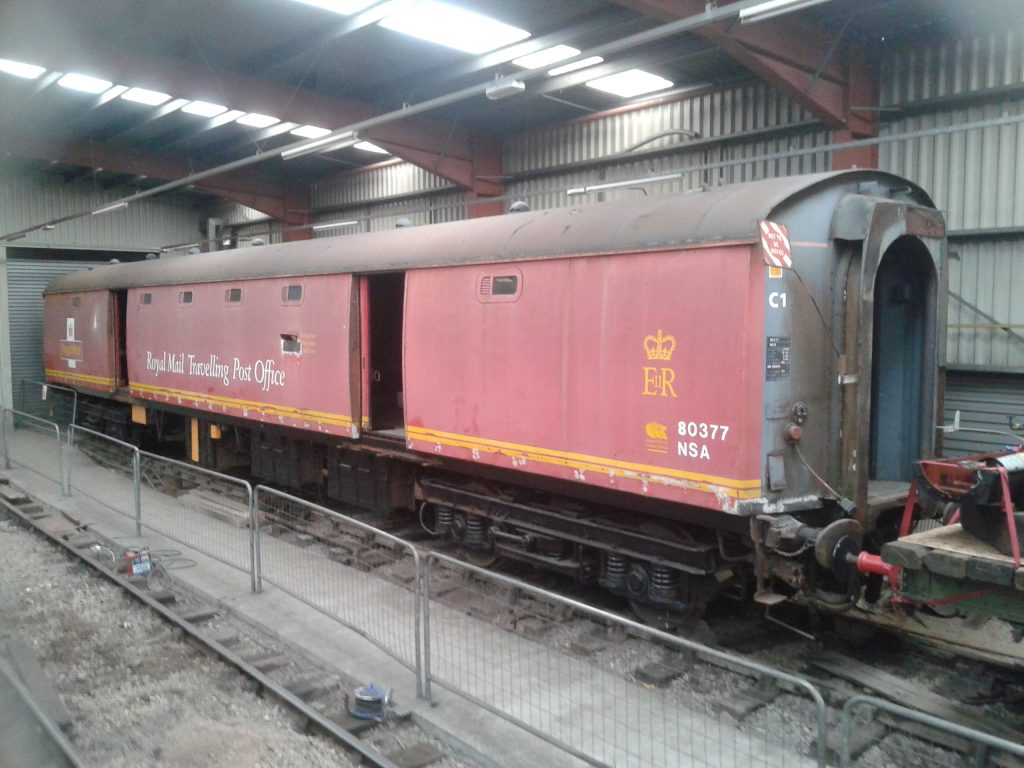 Its place will be taken by the RSR’s Post Office Sorting vehicle No. 80377 which was recently purchased from the Kirklees Light Railway and is planned to be used as an exhibit in the museum. Built in 1972, the vehicle was withdrawn from service in 2004. Whilst, on the surface, it does not appear to be in too bad a condition, there will be plenty of tidying up to do on the bodywork before it can be painted.

The various snagging jobs on the RMB were the subject of further work this week, and here we have to confess that a previous blog report that John Dixon had nearly finished replacing the panelling and beading around the doors was proven to be incorrect. John was keen to point out that such jobs take rather longer than people think and the blog team profusely apologises for belittling the task! 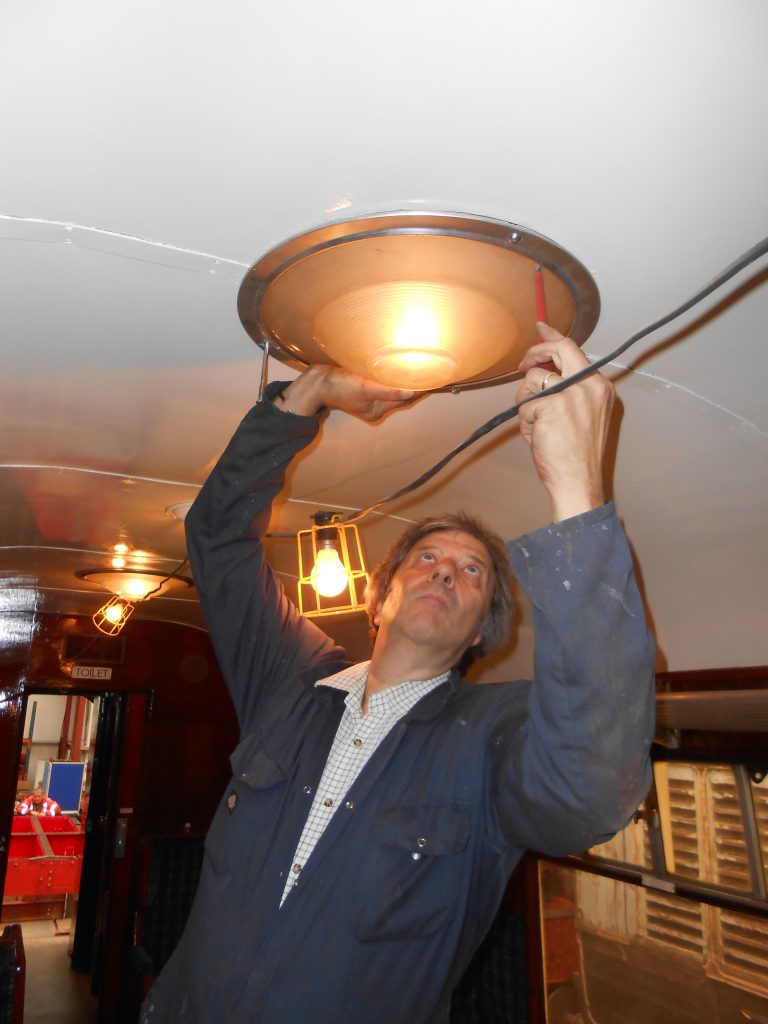 A shore electrical supply was  connected to the RMB so that the lights could be tested. Although many of them were not working initially, this was mainly because of dirty contacts. By the time that Mike Rigg had finished his work only one light bulb actually had to be changed. 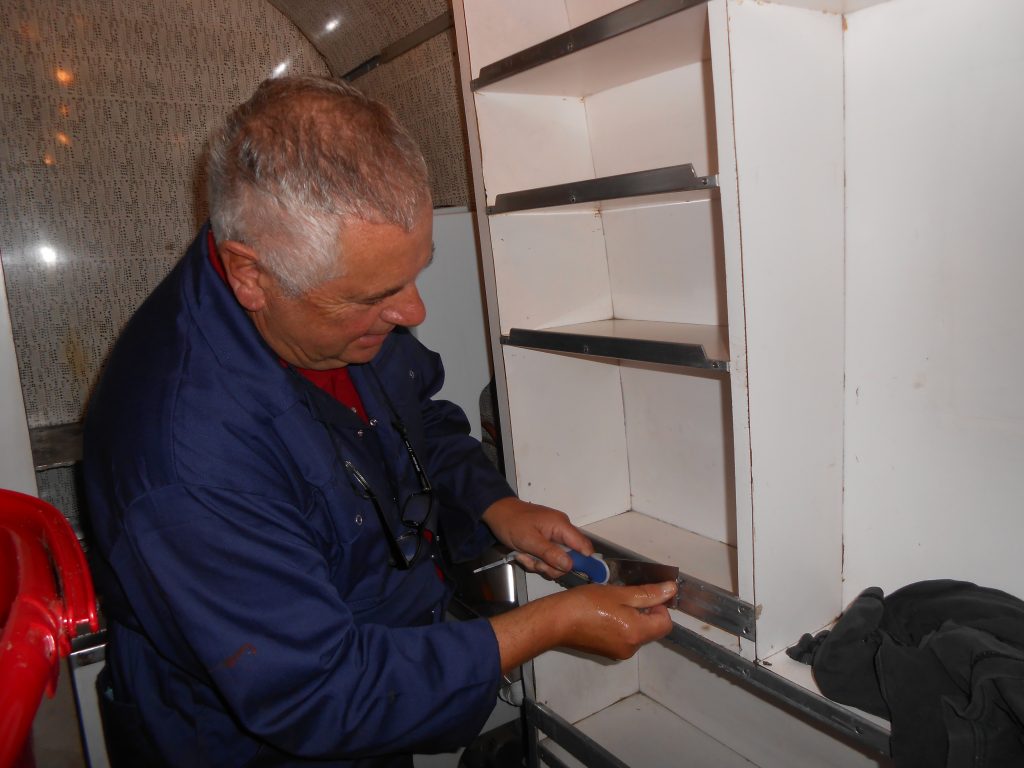 John Davis (seen here) and Paul carried on the other jobs inside the RMB including polishing the brasswork, which had obviously not seen a cleaning rag for many a year.

Adrian continued his work with a paintbrush on Caliban, giving a coat of black to the reverser quadrant whilst John H and Alan attended to other important jobs such as making a decision on the main colour scheme for the loco. 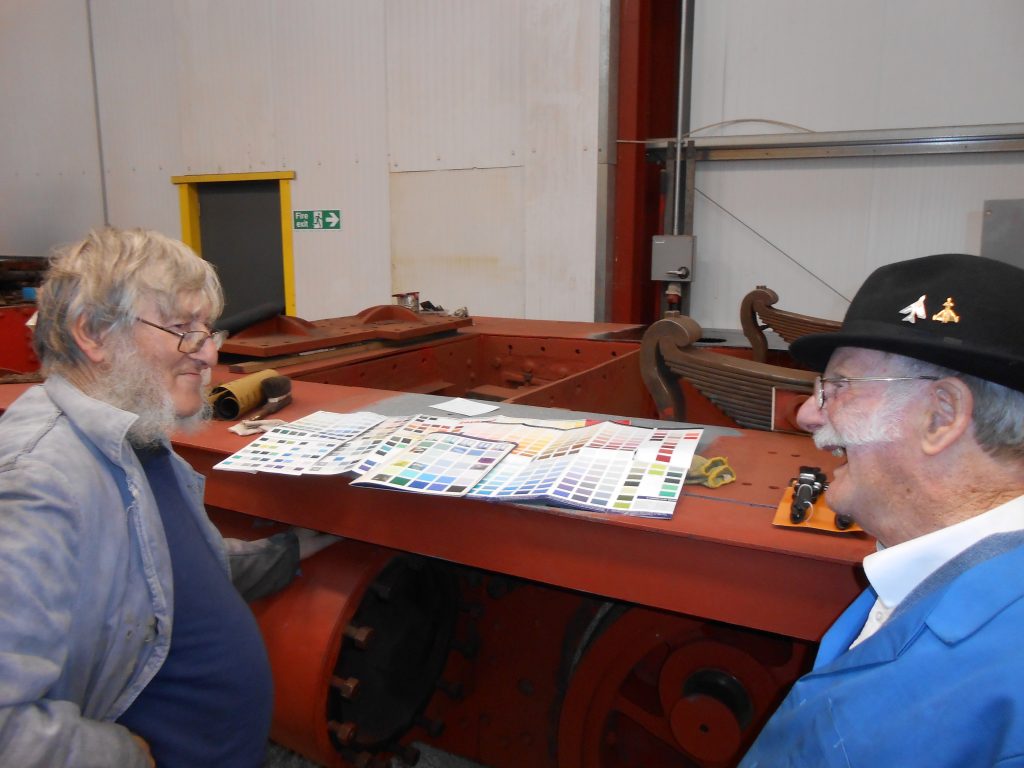 At Adrian’s request Tim had brought in a pile of colour charts as Ade has hopes of painting the wheels in the not too distant future. Having brought the number of shades of blue down to a choice of three, Alan and John finally opted to be contrary by choosing ‘Pacific Blue’ for a 0-4-0 saddle tank loco!

Wootton Hall‘s tender frames are now perched on a custom built steel stand constructed by Keith from some scrap RSJs which had been acquired. Roger and Fred turned up very late on Friday having been stuck on the M6 for a couple of hours north of Preston. Roger put a coat of grey undercoat on Wootton Hall‘s brake beams whilst Fred went cleaning up the former Foxfield water column.

The RSR’s Autumn Diesel Gala was successful and was augmented by the addition of a visiting DRS Class 37, which came down from Kingmoor at Carlisle. There was also some evening running in conjunction with a Folk Evening in the cafe which Alison had organised to raise funds for the new children’s playground, with music being provided by Fleetwood Folk Club. The whole event turned out to be a great success, so well done to Alison, to all those who provided the music, the front of house staff and, of course, the diesel gang who ran the trains. There is already talk of another similar event next year.

Last Thursday afternoon Tim went across to Locomotion at Shildon on behalf of the FRT to attend a Stakeholder Reception to mark the takeover of Locomotion by the Science Museum Group (SMG). The museum had previously been run as a partnership between Durham County Council and the National Railway Museum. It was announced that Durham County Council is to fund the conservation of the Grade 1 listed coal drops, which have been fenced off because of a deterioration in their condition. Ian Blatchford, Director of the SMG, then confirmed that the SMG is going to spend £1.6m on conserving the historic buildings at the Hackworth end of the site and that he had aspirations to spend more money on telling the story of Shildon’s contribution to the early days of railway operation. It was all very uplifting!

Next weekend sees Alan and Alison also head once again over the Pennines to Locomotion at Shildon for a couple more FR 20 steamings in connection with the Shildon Model Railway Exhibition.