It has been another full week of activity to keep us busy.

The Preston Branch meeting on Tuesday turned out to be an unfortunate catalogue of cancellations. Ade’s train from the Pleasure Beach was cancelled so he had to find an alternative means of getting to the meeting. Then it was found that the landlord of The Ale Emporium had changed and the usual room had been hired out to a ladies’ dance group(!). The evening then became an opportunity for members to have a beer or two whilst having an enjoyable discussion. Alan’s new ‘phone became the source of the evening’s photos, the main feature being the X-Ray of Alison’s knee (see last week’s blog) and bruised legs! Others continued to chat, with a break out party to the Vic, whilst Tim had to hurry home after discovering that the later Furness Line train had been cancelled as well…!

There was a good turn out at Preston on Wednesday. 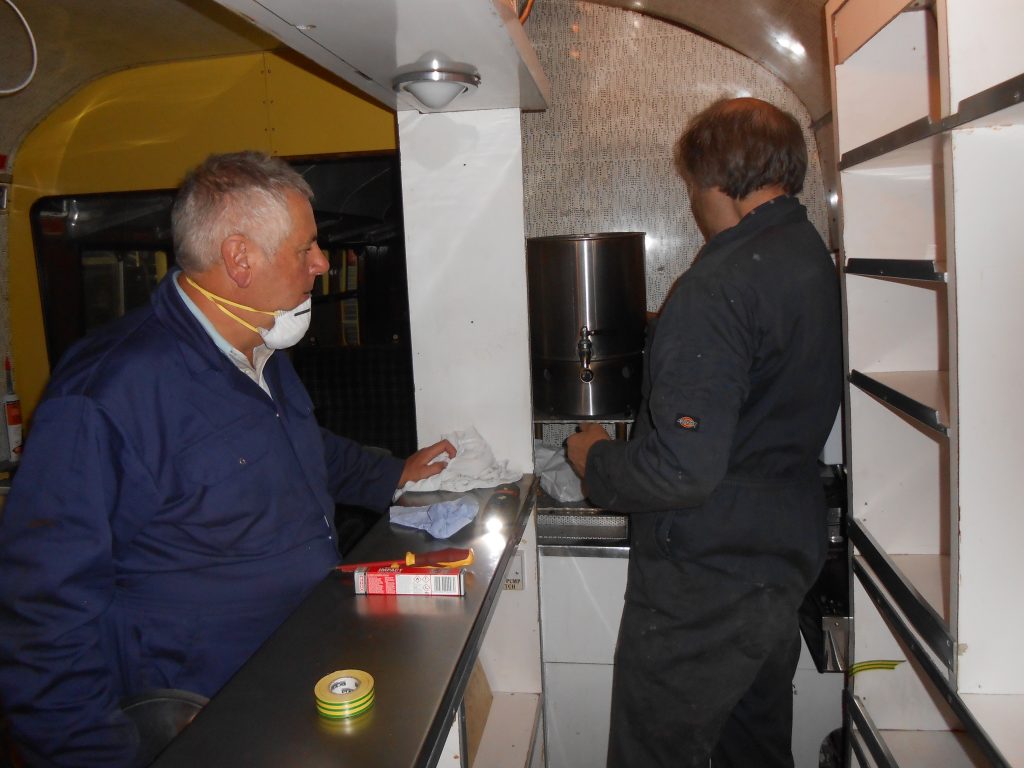 John Dixon continued with his woodwork on the RMB door beading, whilst Mike and John Davis cleaned the servery area and re-fitted the water boiler. 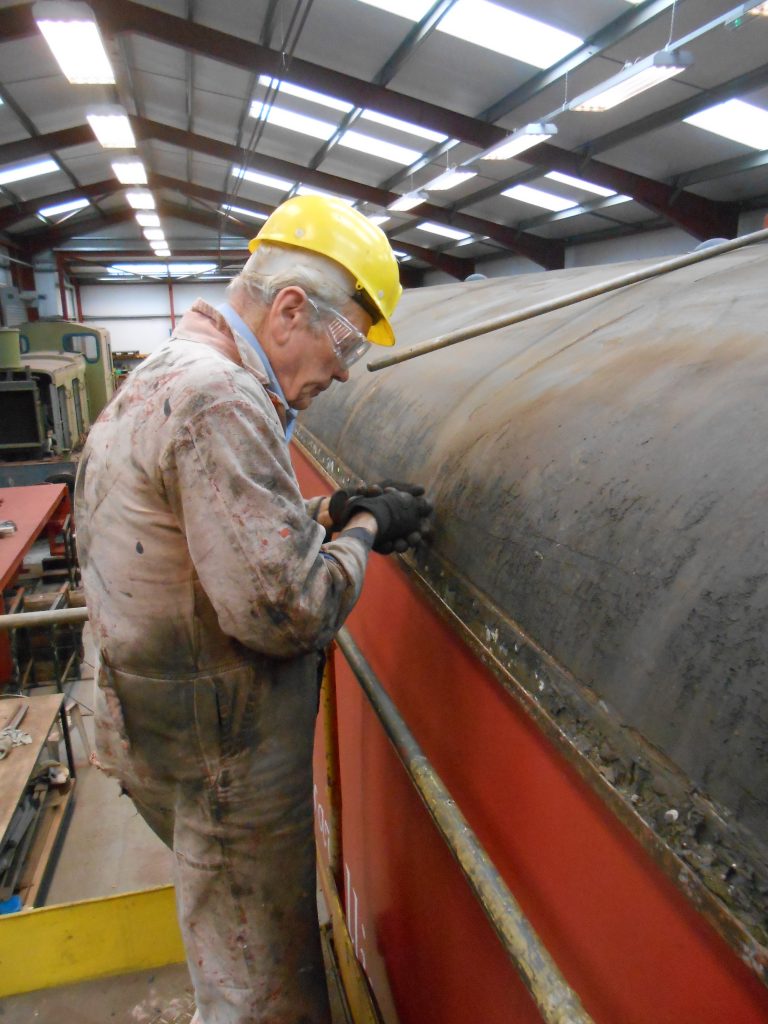 Tim spent the day cleaning the south side of the TPO vehicle roof, which was finished on Friday with the assistance of Fred. Paul has been vacuuming the seats, which now look much better after his attention. 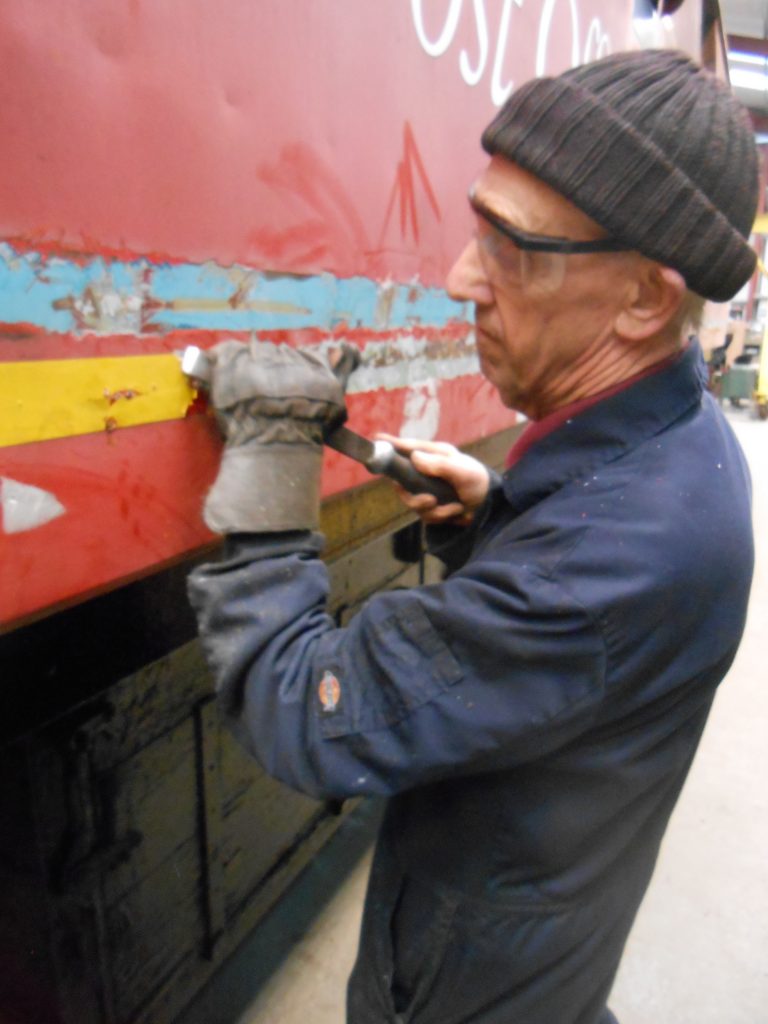 Howard continued the challenge of removing the yellow tape from the sides of the TPO and on Saturday Howard and David between them managed to finish removing both yellow stripes from the north side of the TPO – as Howard said, parking restrictions have now been removed! 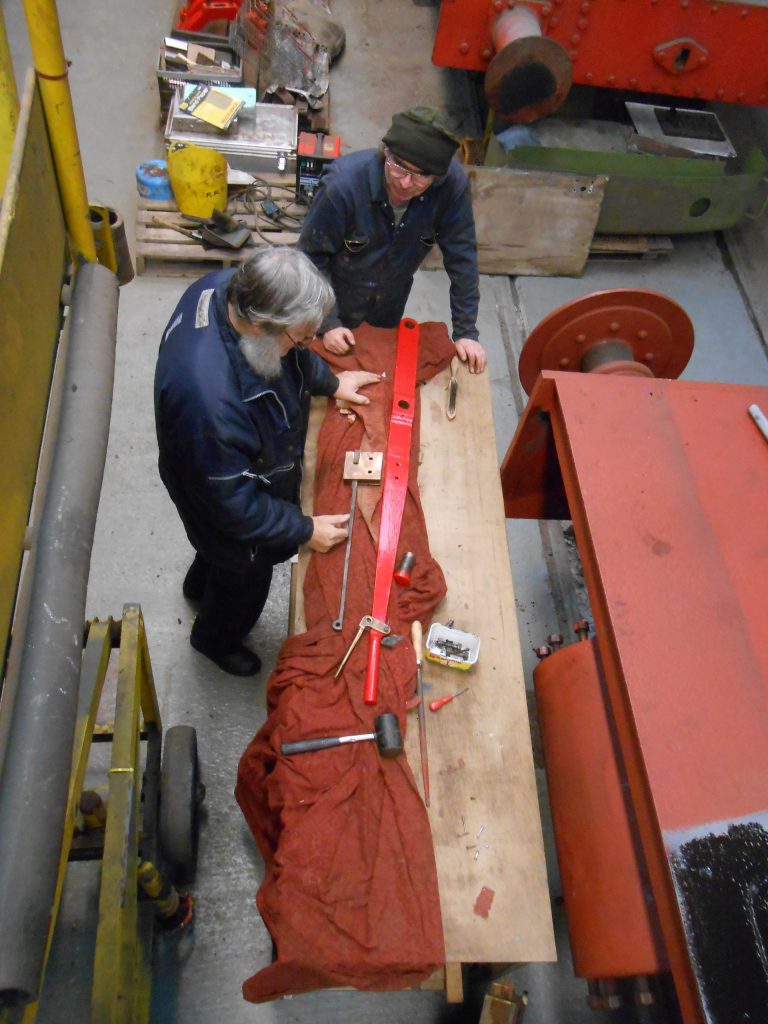 Ade was busy re-assembling the reverser gear on Caliban after some deliberation with Alan as to how it fitted together. 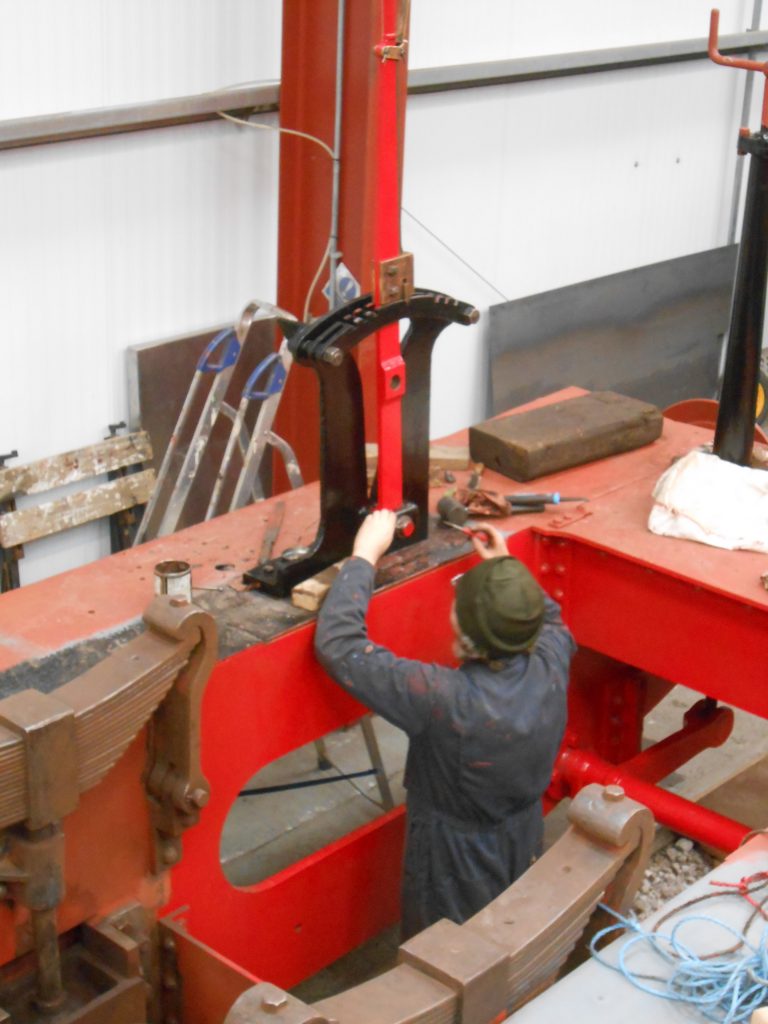 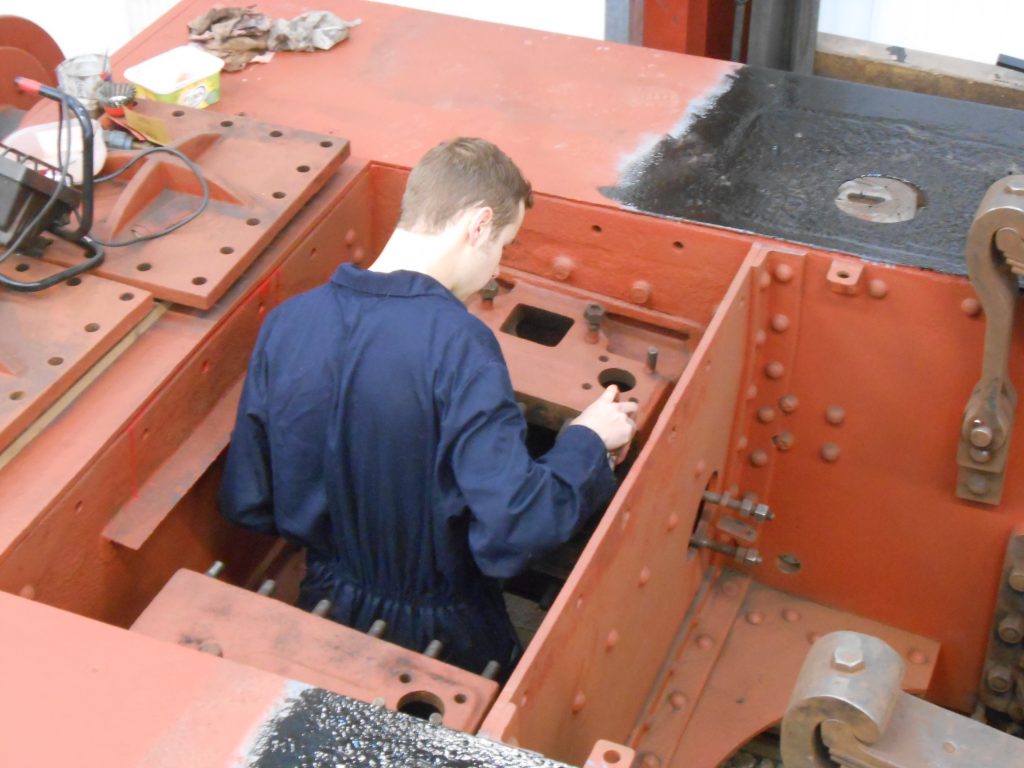 Meanwhile Sam spent a considerable time cleaning up the threads of the studs for Caliban‘s valve covers. 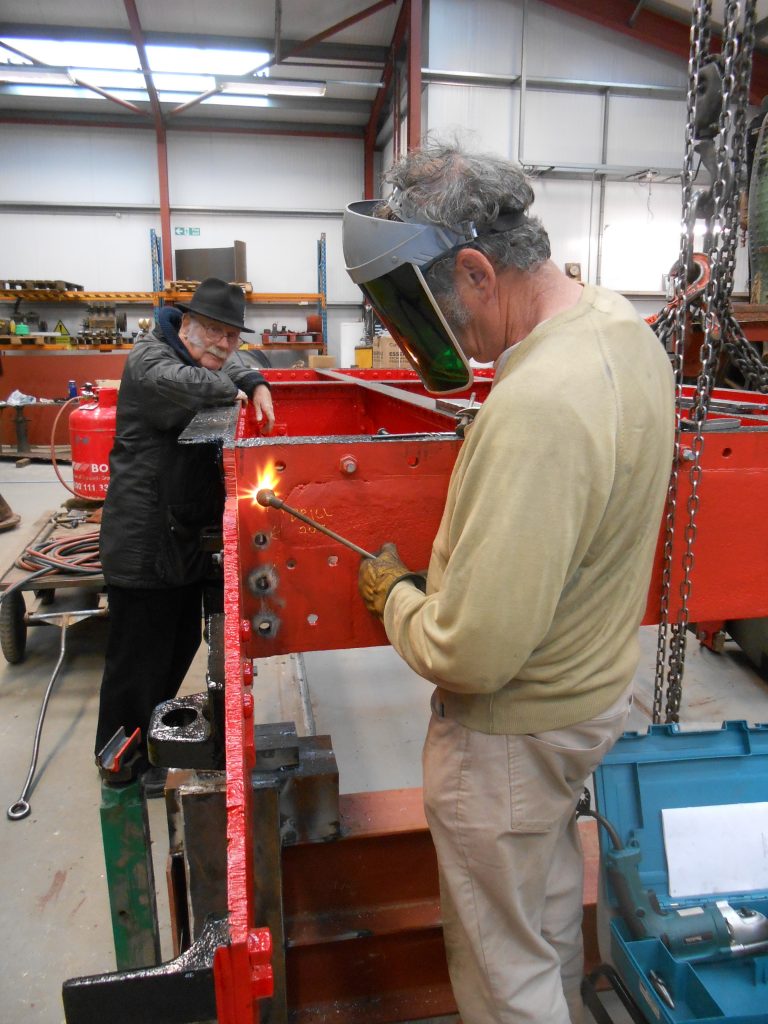 John H is seen here giving Keith a hand, who was removing old rivets from the Hall’s tender frames. 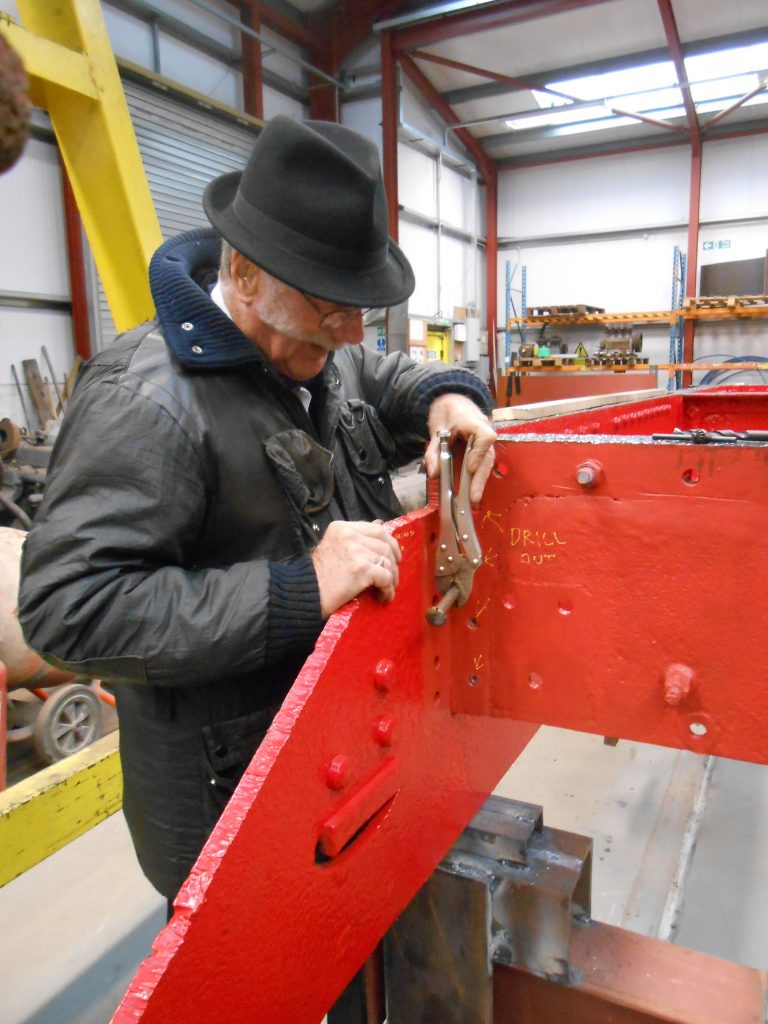 We had to remind John H that he had been caught red handed working on a GWR loco! 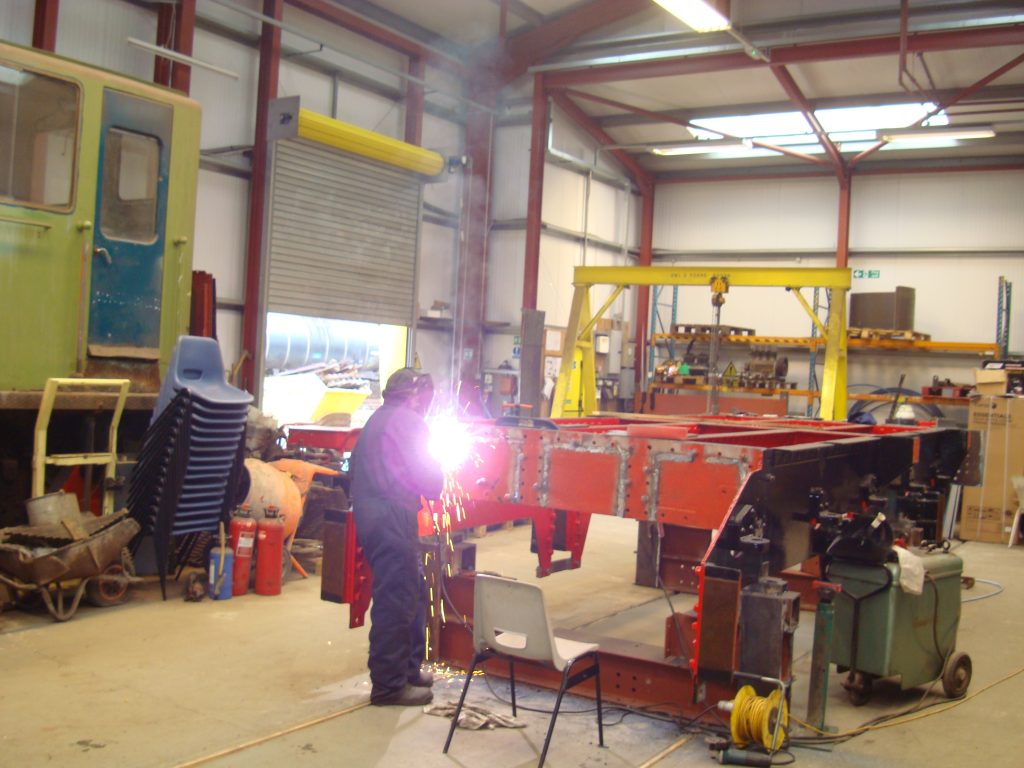 John Stewart came in on Saturday to do some welding on the frames, seen here, and the buffer beam was then temporarily fitted on to the frames. 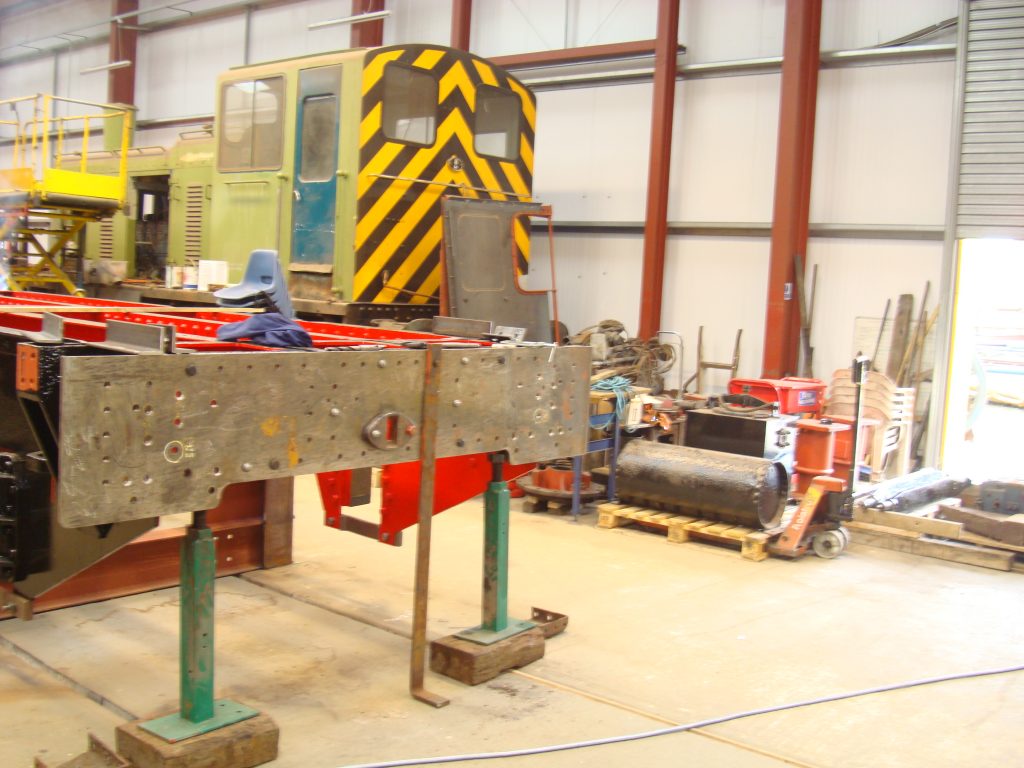 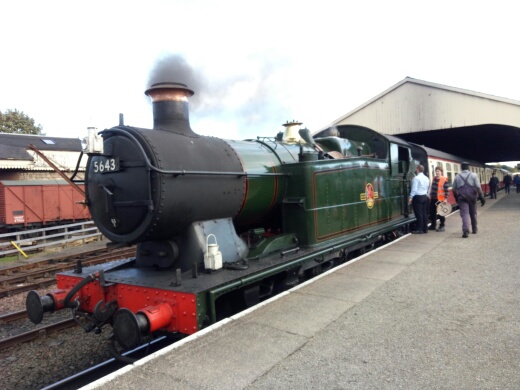 As you will recall, 5643 was due to be transported up to the Bo’ness & Kinneil Railway on Monday, but when Alan and Alison arrived there on Thursday afternoon it was nowhere to be seen. It finally arrived on Thursday evening to be offloaded on Friday morning. The causes of the delay were driver sickness, a fault with the trailer, flooding on the A65 on Wednesday and a crane fire near Kendal on the M6 on Thursday morning, which caused the northbound carriageway to the closed. 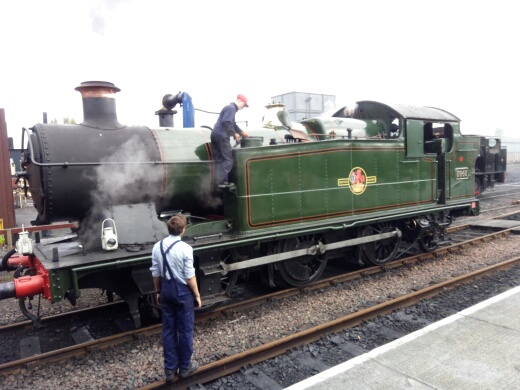 However, having said all that, Alan reports that 5643 ran well on Saturday and Sunday on the B&KR’s service train with barely a slip on that bank past Birkhill. It seems that some of the people attending the photo charter next Friday were trying out South Wales headcode targets (eg Abercynon to Merthyr Tydfil) on the loco to make sure that they would fit. Alison set up a souvenir sales stand in the buffet car as well as taking some photos for us to enjoy. 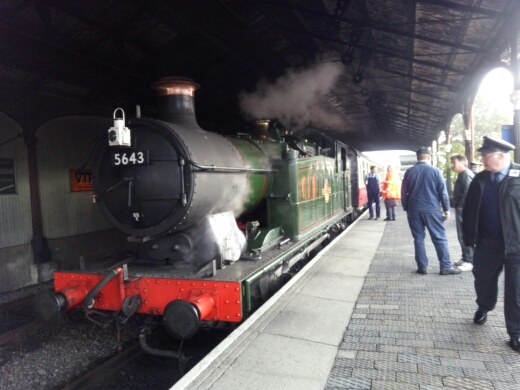 Moving on, no sooner have we finished completing the 14 month boiler strip down and examination on 5643 than it is the turn of Furness Railway No. 20 to undergo the same process. A working party at Locomotion, Shildon, has been scheduled for Tuesday, 31st October with a cold examination by the boiler surveyor booked for Friday, 3rd November. A formal steam test has been provisionally booked for Friday, 10th November, in advance of two further booked steamings on the 11th and 12th in connection with a Lego event.