It has been another busy week for us at Preston which has seen the restoration of the RSR’s Travelling Post Office Sorting Vehicle almost complete. 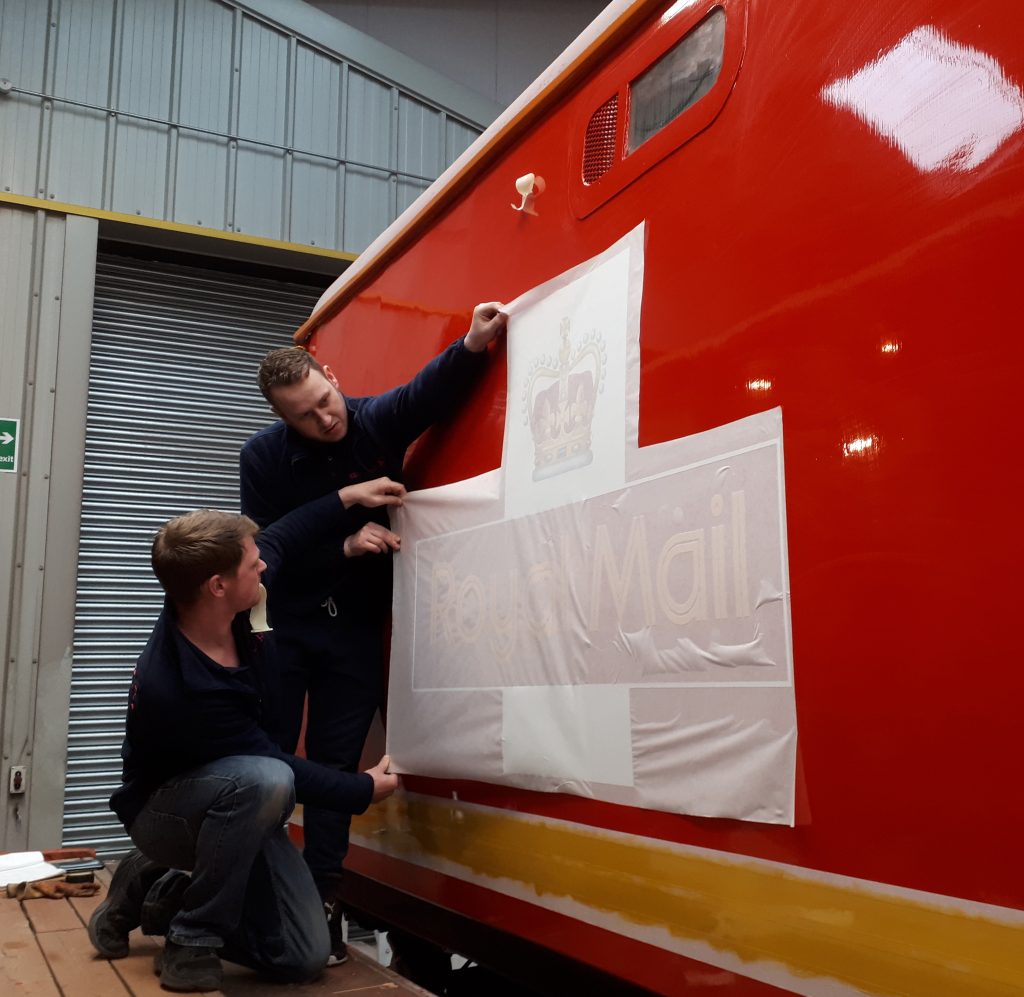 The people from PPS Graphics from nearby Anchorage Business Park turned up as scheduled on Wednesday morning and, with Tim’s assistance, applied the fantastic graphics to the bodysides of the TPO.

The job took over three hours, but the care given to getting things right was well rewarded in terms of the finished product. Having checked that the yellow stripes painted on the bottom panels were a good match to the graphics, the masking tape was duly removed and the vehicle readied for varnishing on the Friday. Meanwhile, John Dixon and John Davis had been busy painting below the frames, applying the ‘electric orange’ paint to the various electrical cabinets and electric train heat equipment.

The main task on Friday, to varnish the coach both sides from end to end, was completed without incident by John Dixon and Tim whilst John Davis prepared and cleaned the brush strips which will be refitted to the sides of the sliding doors – these were presumably designed to prevent draughts whilst the TPO train was travelling at speed. It is intended to refit these brush strips this next week before the TPO is moved into the RSR’s Museum to become the centrepiece of a feature on Mail by Rail. 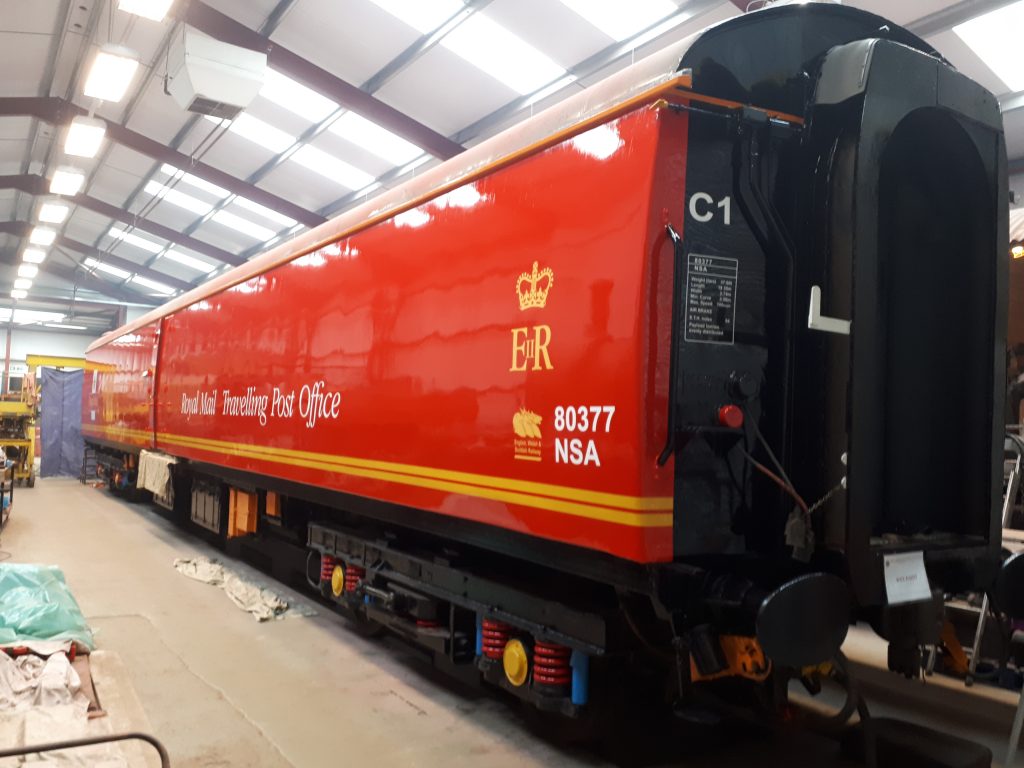 The TPO coach is seen here after varnishing had been completed.

Howard has had a frustrating time in trying to remove the spring hanger pins on Caliban, the application of heat by John Stewart the previous Saturday having seemingly had little effect. Alan Ogden appeared on Wednesday to continue his work on Fluff but, in Adrian’s absence, took pity on Howard and lent a hand. Adrian – it looks as if there will still be plenty of work for you to do when you return from your convalescence!

Ian Massey returned on Friday to continue the task of welding the new front steel plates on to Wootton Hall‘s tender frames. A screen was rigged up to prevent sparks from affecting the nearby work on the RMB. (It’s in the background of the picture of the almost-completed TPO van.) The completion of this welding is a key milestone in the project to re-build the tender, so well done to all concerned.

Mike Rigg turned up on Friday with his electrical gear to do some work on the FRT’s former RMB, No. 1812. It appears that the lighting system has been causing some problems, but Mike informs us that things seemed to have improved when he called in to check during the RSR’s Diesel Gala on Saturday.

Cumbria‘s successful stint of over two years at The Battlefield Line concluded this last weekend and the loco is scheduled to be transferred to the Embsay & Bolton Abbey Steam Railway on Thursday. All being well, it should be in steam there next weekend.

The travails of the FRT’s support vehicles (the campervans) continue as the now 46 years old VW owned by Tim finished up arriving at Morecambe for its MoT and service on the back of an AA truck, having failed during its journey there on the A590 through a fuel pump failure. The good news is that it is now back home and ready for action, although the mackerel tin lid that is held in place over a hole in the exhaust tail pipe by three jubilee clips is still in position as it was deemed by all concerned to be an adequate repair!

Finally, there is a meeting of the Trustees next Monday evening at Alison’s house when the 2017 Accounts and Trustees’ Annual Report will be reviewed followed by a discussion on Mike’s proposed action plan for the implementation of the General Data Protection Regulations. And then there will no doubt be the little matter of making suitable inroads into Alison’s sandwiches before we are allowed to go home!