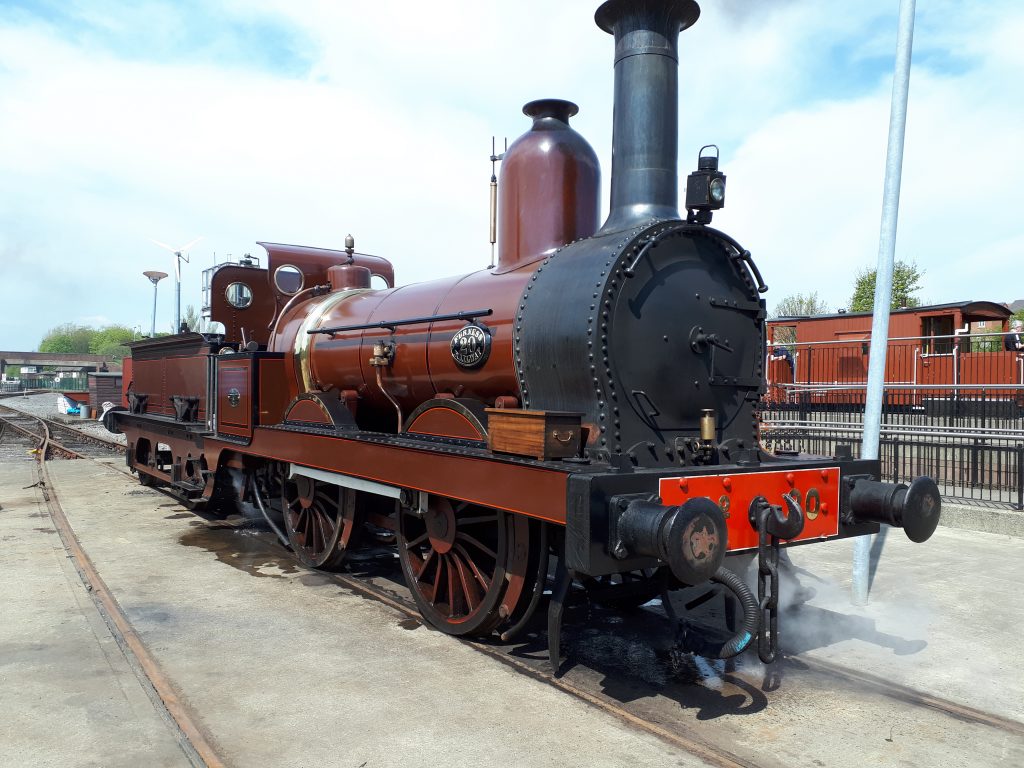 This last weekend saw Furness Railway No. 20’s last three days of operation at Locomotion, Shildon before returning to Preston this week in readiness for its ten year boiler overhaul. 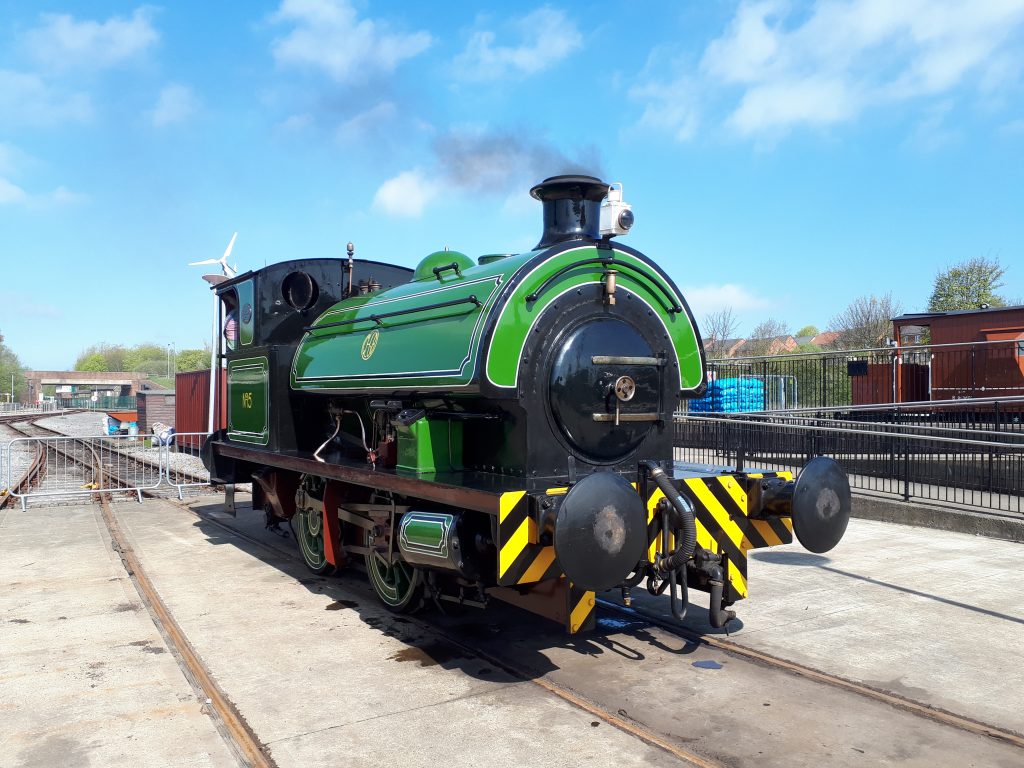 Locomotion had arranged a Festival of Steam, which included the first appearance of replacement locomotive, RS&H 0-4-0ST Eustace Forth plus some road steam engines. 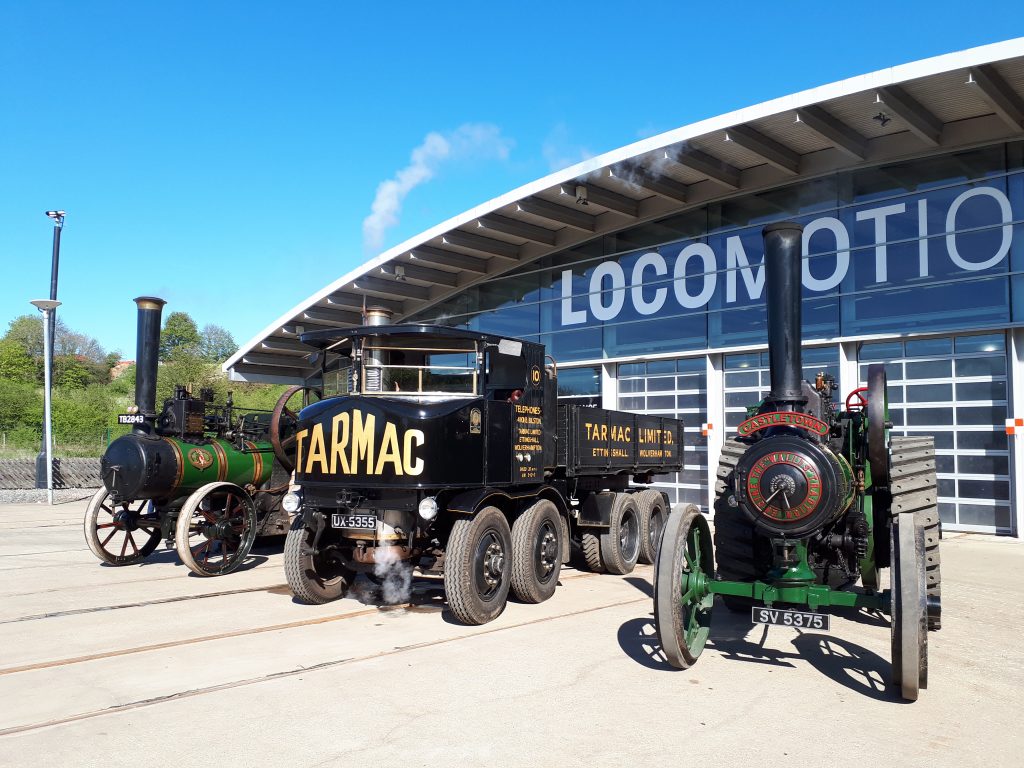 That Sentinel steam lorry was certainly an impressive beast! John and Jean Dixon, Sam Middleton and Keith Brewer visited on Sunday to enjoy the sunshine and steam. 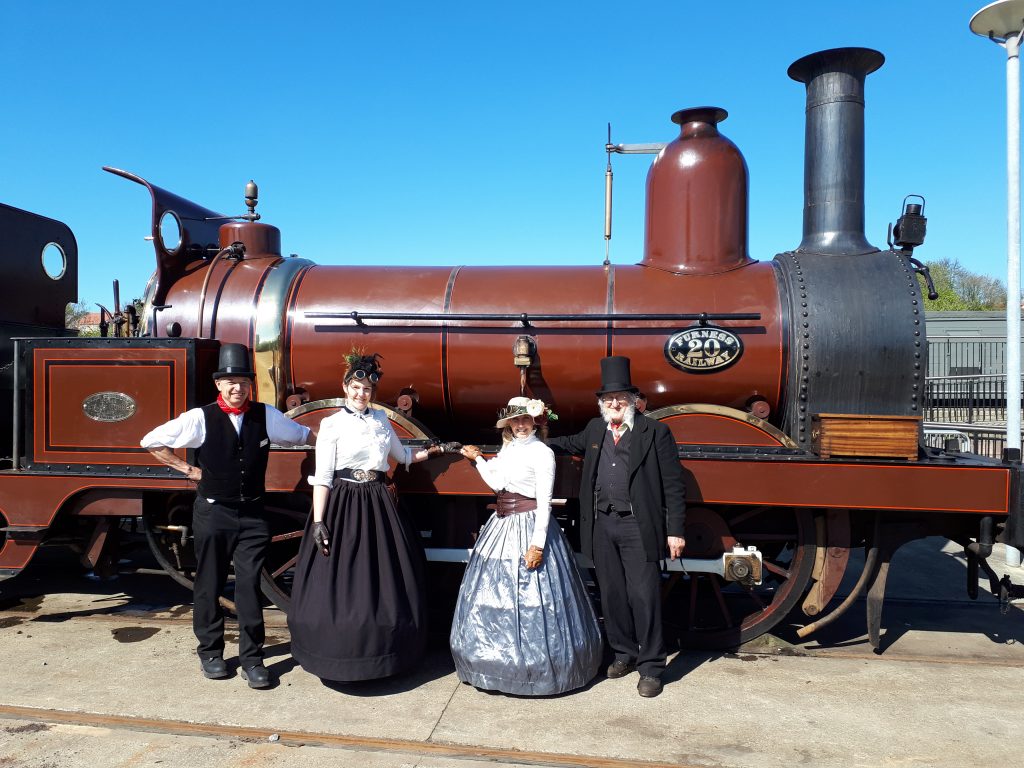 Alan and Tim had their photo taken with two young ladies from the Same Difference Arts who were performing street theatre in Steam Punk attire. 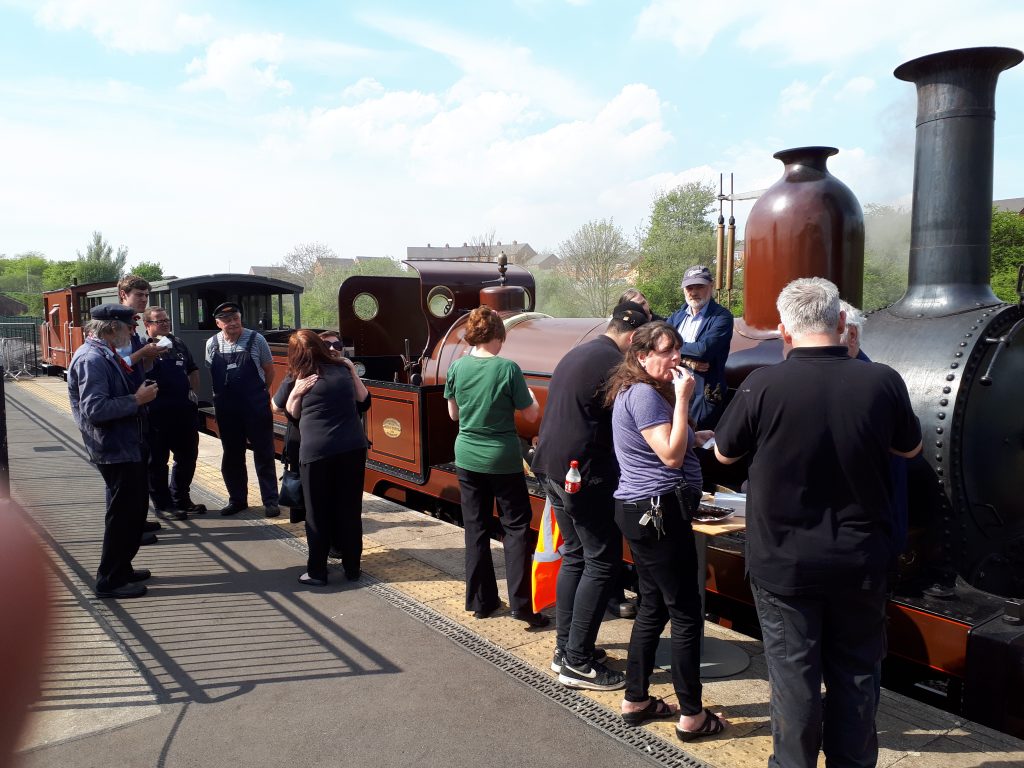 FR 20 ran the last three hours on Monday on its own, with a pause at 15.30 to enable the NRM’s Anthony Coulls to make a lovely speech on behalf of Locomotion to mark the nine years that FR 20 had been based there. There then followed the cutting of two large cakes before staff and volunteers boarded the train, along with visitors, for the final two departures of the day. Needless to say, there was some loud whistling from the locomotive on the final journey (by guess who) followed by some goodbyes from Alan, Alison and Tim to the Locomotion family of staff and volunteers, some of whom had turned up on Monday to have a last go on the regulator. All in all, a fitting if not rather nostalgic occasion. Hopefully, FR 20 will be back in the not too distant future.

As of tonight, FR 20 is standing on the apron at Locomotion waiting to be loaded at 09.00 on Wednesday morning and, at the time of writing (just before 8pm) poor Alan is at Killington service station waiting for the second AA breakdown truck of the evening to take him onwards to Preston following a clutch failure on his campervan at 14.30 hrs going over Stainmore on the A66. Alison has arrived at Killington to keep him company and he hopes to be at Preston before midnight! 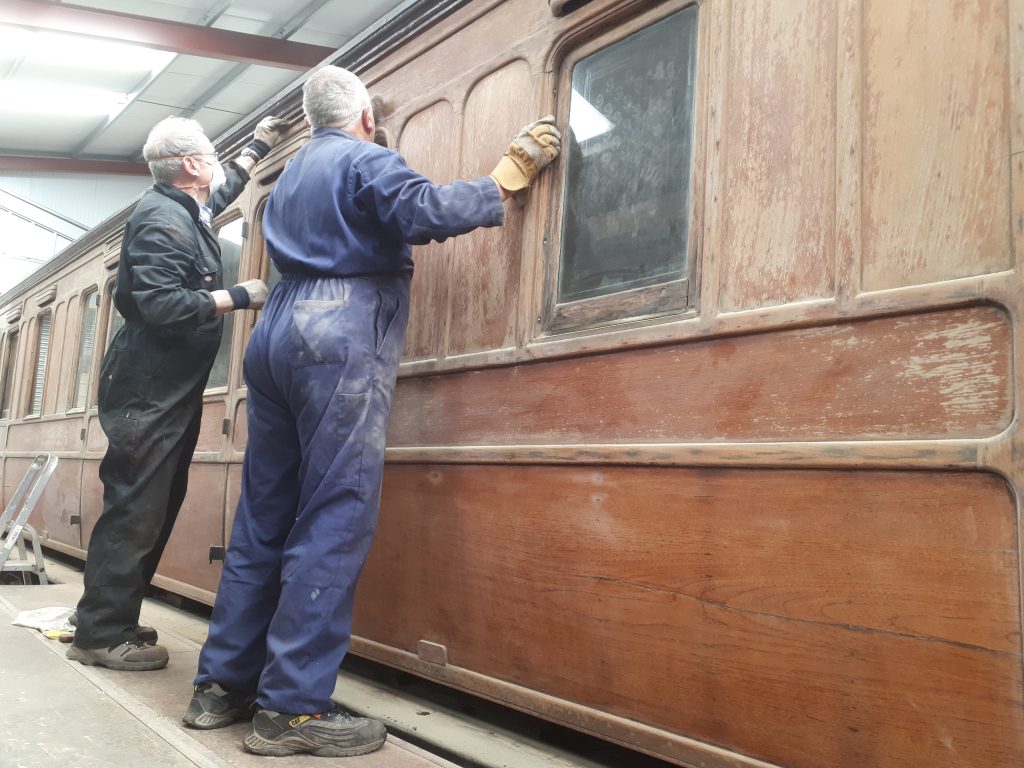 Work has continued at Preston on sanding down the weathered sections of woodwork on GER Royal Saloon No.5, although fingers are now becoming rather numb from the effort! The worse side has now been tackled so a start has been made on one of the ends. The second side should just require a light sand to allow new varnish to key to the existing varnished surface. John Dixon and John Davis are seen here in synchronised sanding action. 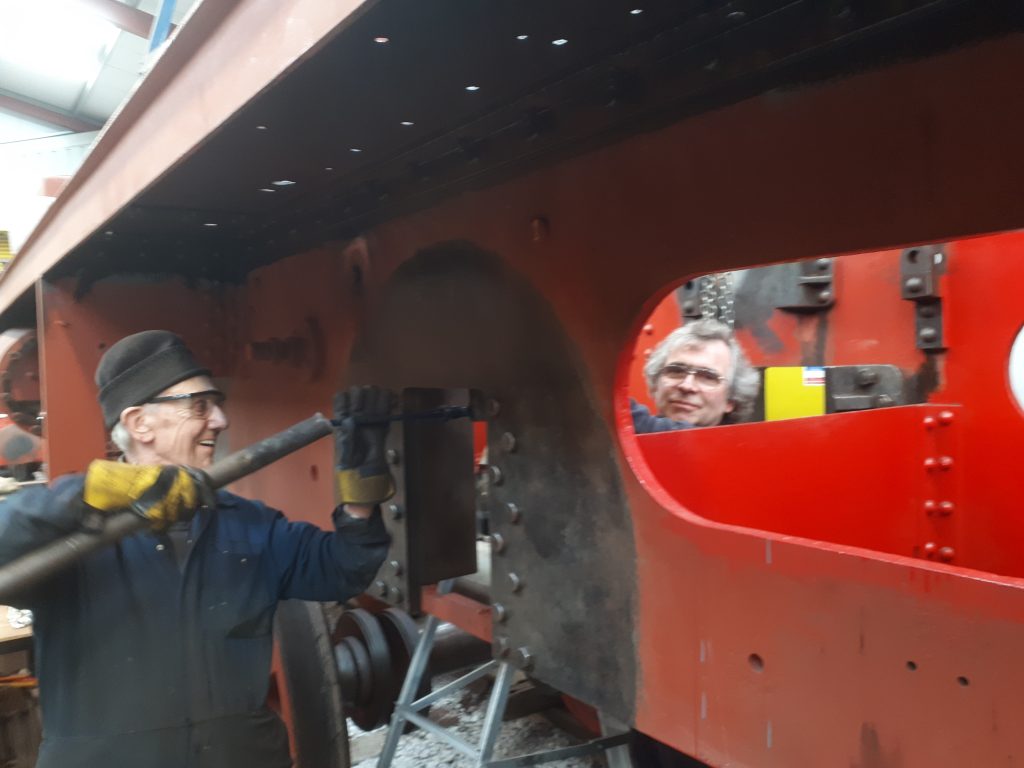 Adrian made a welcome return on Wednesday after a visit to works for repairs and is seen here giving moral support to Howard as he battles with the dismantling of Caliban‘s springs. 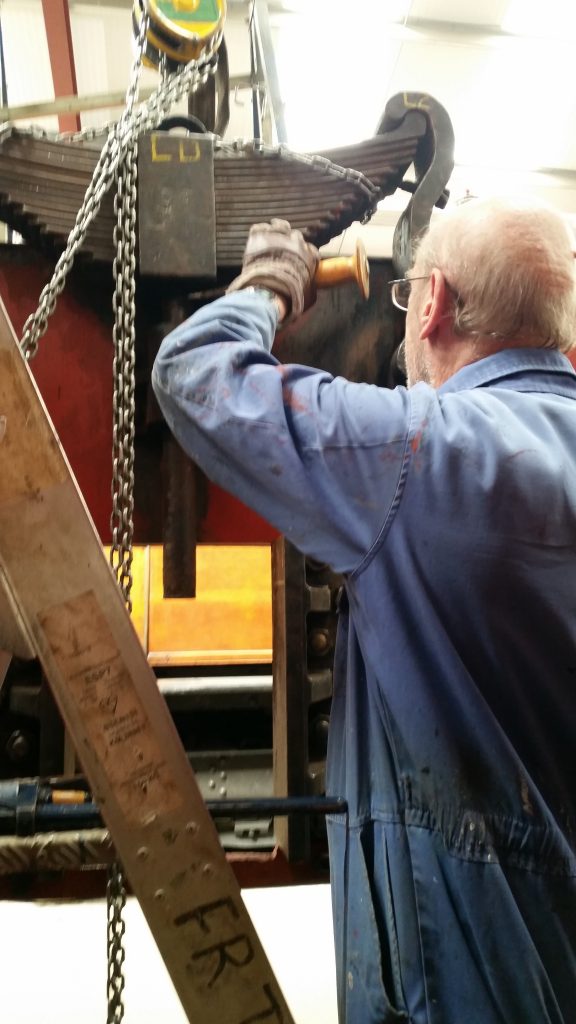 David Rimmer joined in the action on Saturday and a second spring has now been removed. 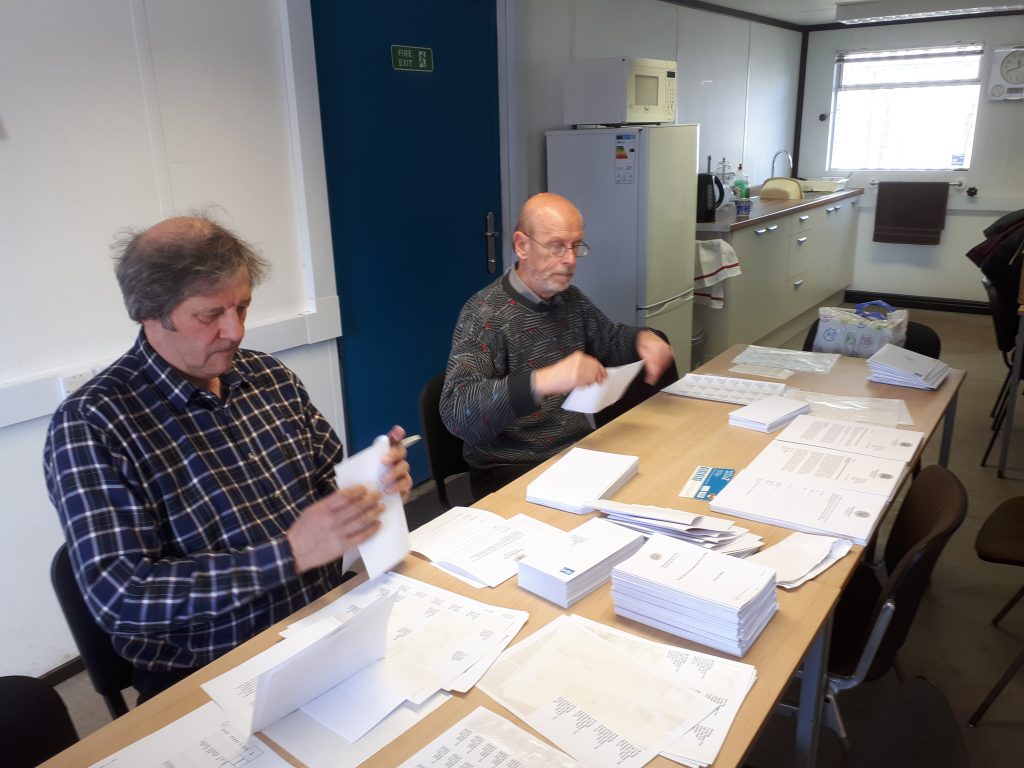 Mike Rigg spent most of Wednesday in the mess room, assisted by David, stuffing envelopes with GDPR correspondence, which should now have landed with members – in fact two consent forms were already back through the post on Friday, even though second class post had been used in both directions. If you haven’t already done so, please return the consent forms as quickly as possible so that the FRT can remain in full contact with you. 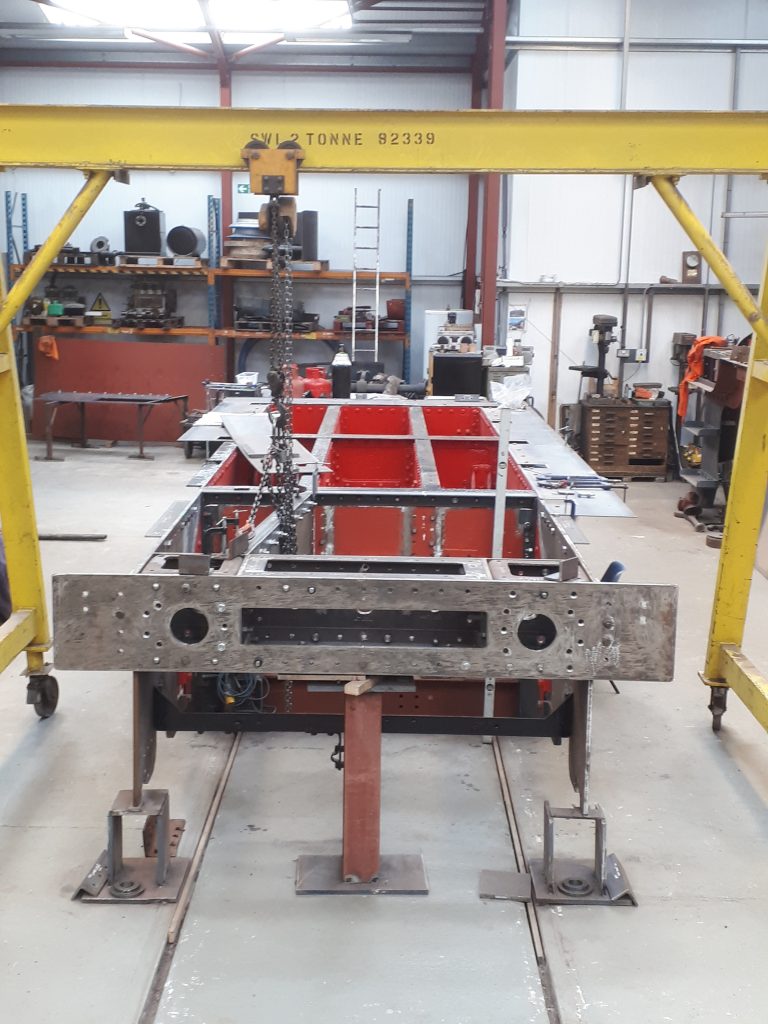 And we leave you with a view of progress on Wootton Hall‘s tender frames, which are now gaining additional metal following the recent completion of the welding work on the side plates.