The pace of work and list of jobs to do seems to intensify whatever we do at the moment! 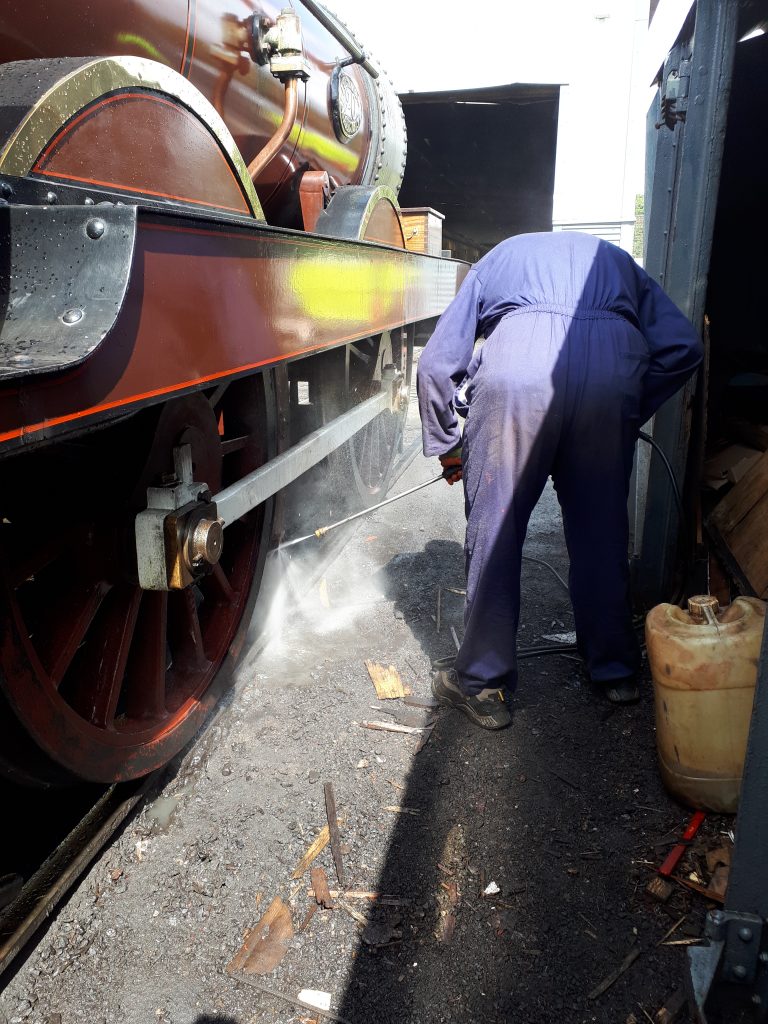 FR 20 was shunted out of the RSR’s running shed last Wednesday to enable the wheels to be power washed after having been coated with Jizer degreasing fluid. Although quite a time consuming process, the results so far have been heartening. The key issue was the need to avoid soaking those members who were also intent on removing components from the loco at the same time! John Davis is seen here with the power washer. 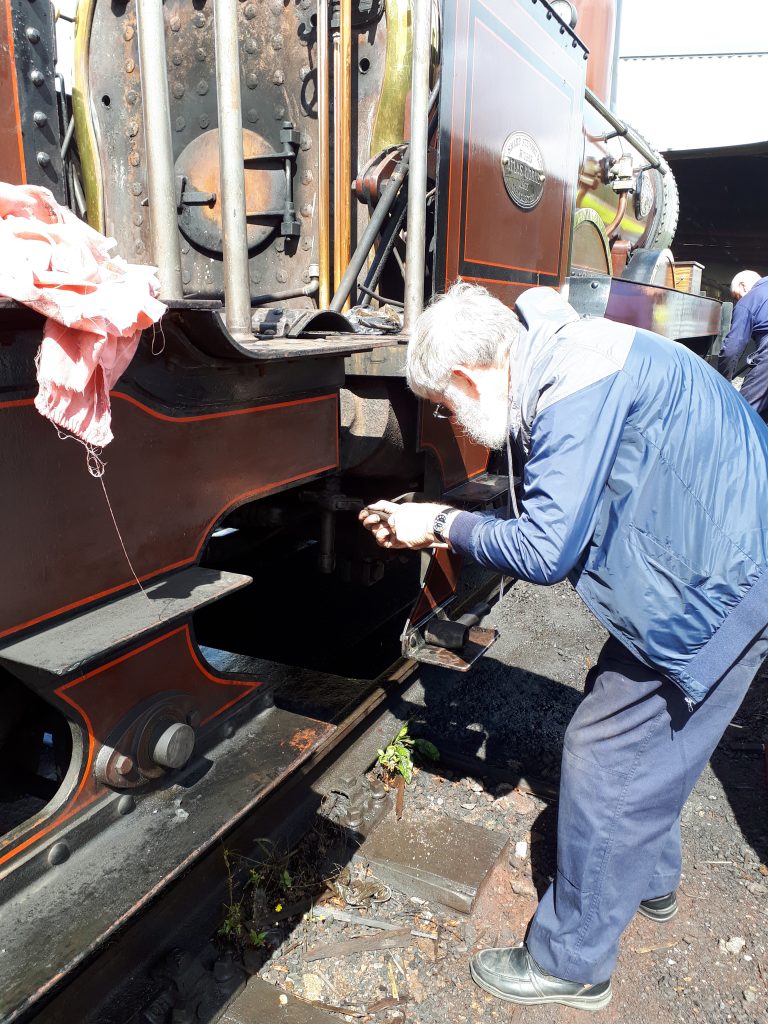 Alan Middleton was one of those dodging the pressure washer to remove some pipework. 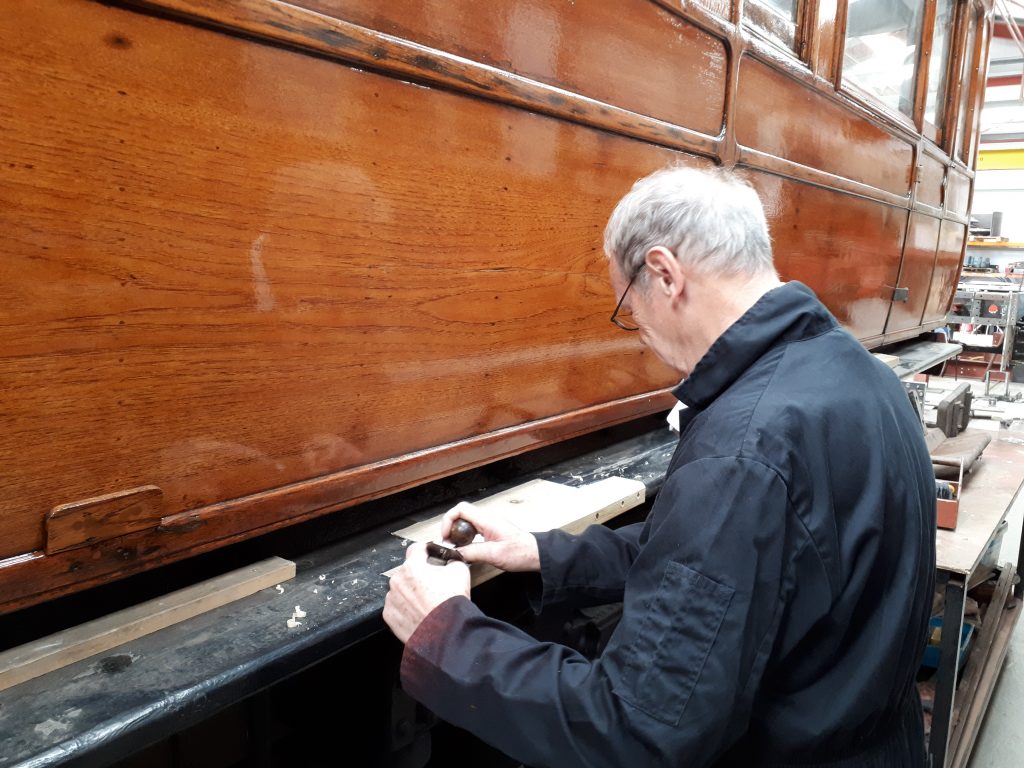 John Dixon spent some more time on repairs to the step boards on GER No. 5 and is seen here planing down the new wood inserts.

On Friday John Davis continued the task of needlegunning the inside of FR 20’s tender whilst Mike Rigg re-assembled the power washer which had done its best to shake itself to bits on Wednesday. 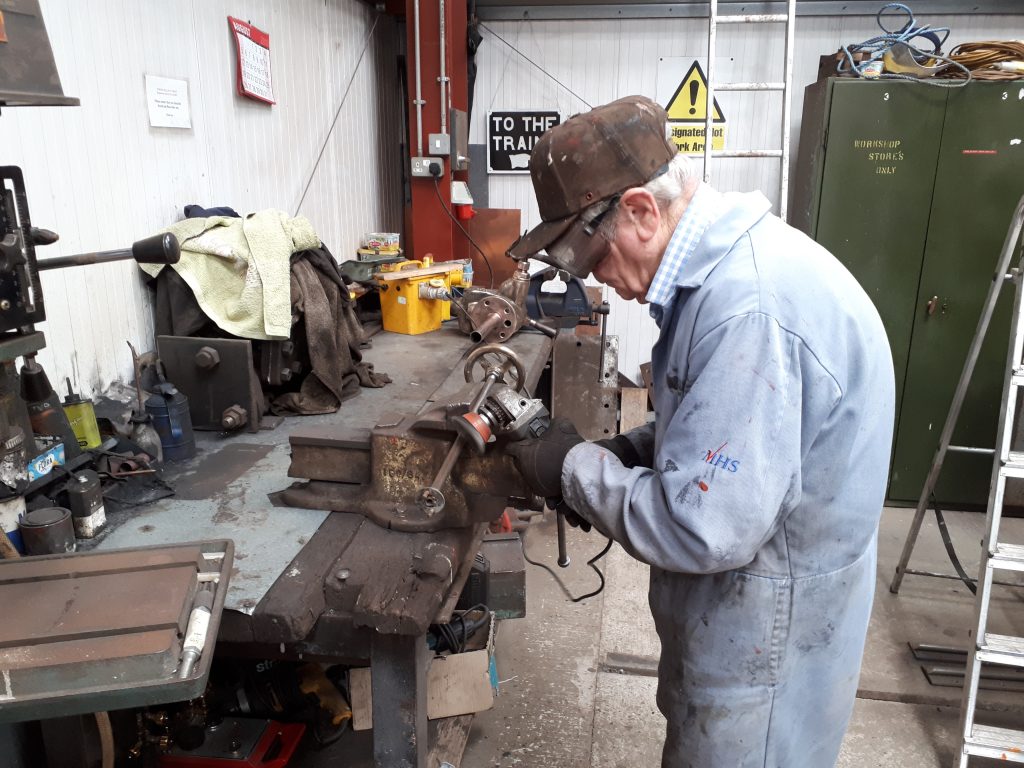 Fred and Tim started the process of cleaning up the components removed from the loco before they are placed in store, with Fred here cleaning one of the injector steam valve handles. 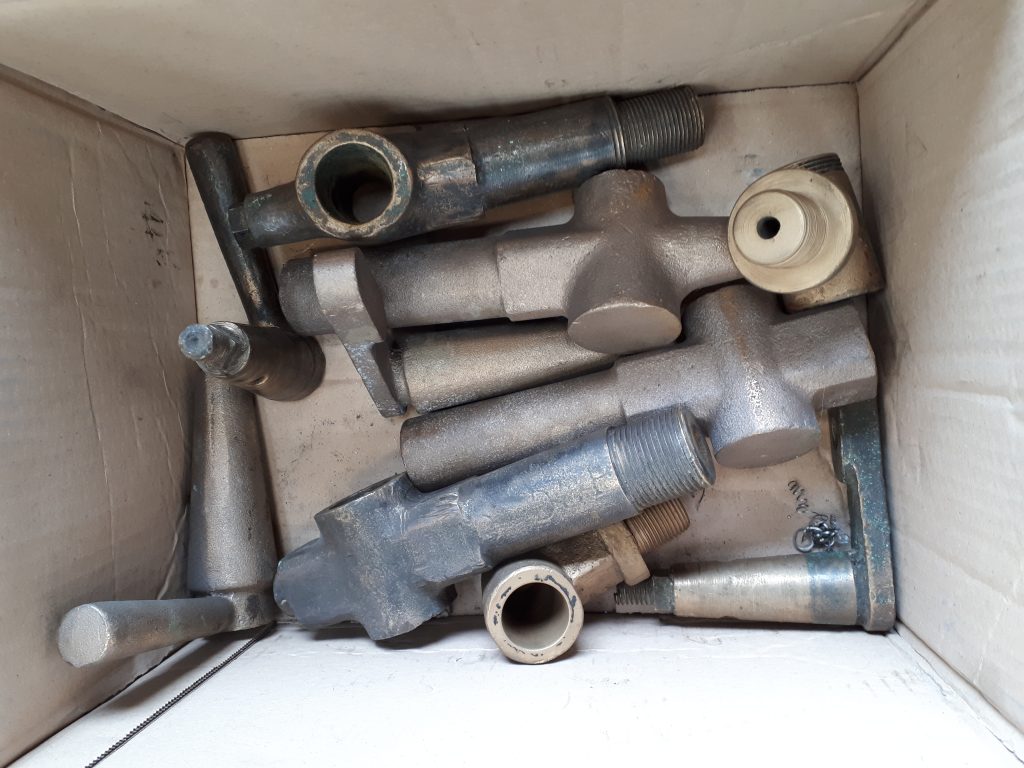 Alan returned home from a short break away the previous weekend with a set of drain cock castings and coupling rod half bearing castings for FR 25 that he had picked up from Steve Andrews. 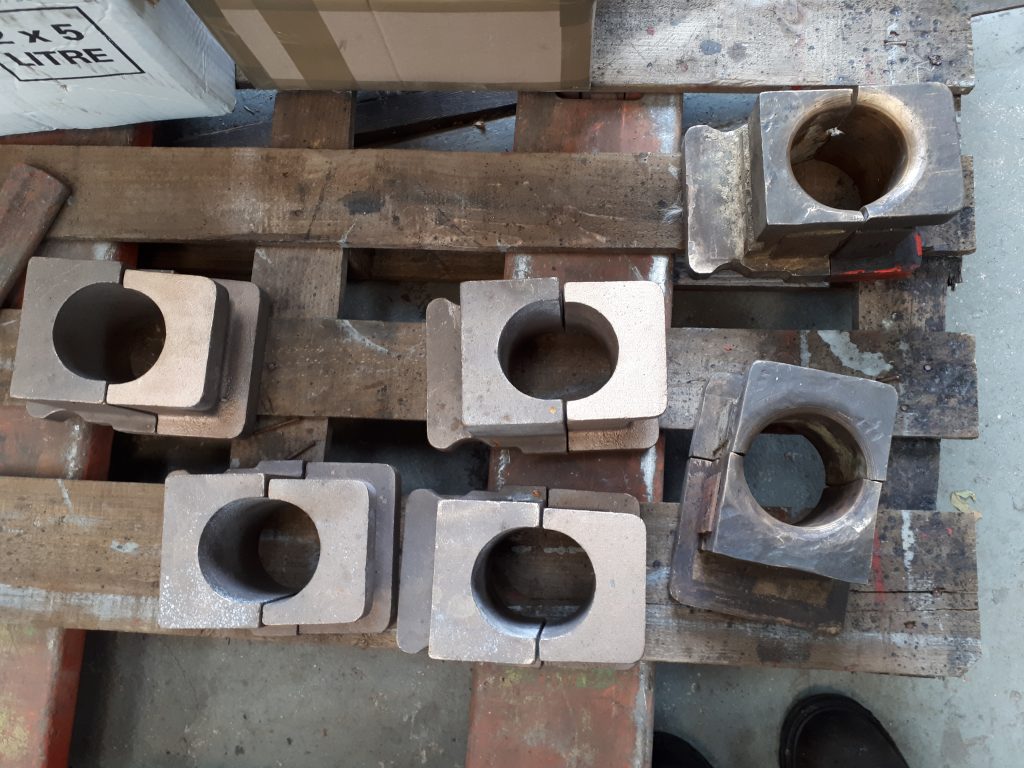 These had been ordered by Bert Hitchen before his untimely death but we are now in a position to unite them with the loco. 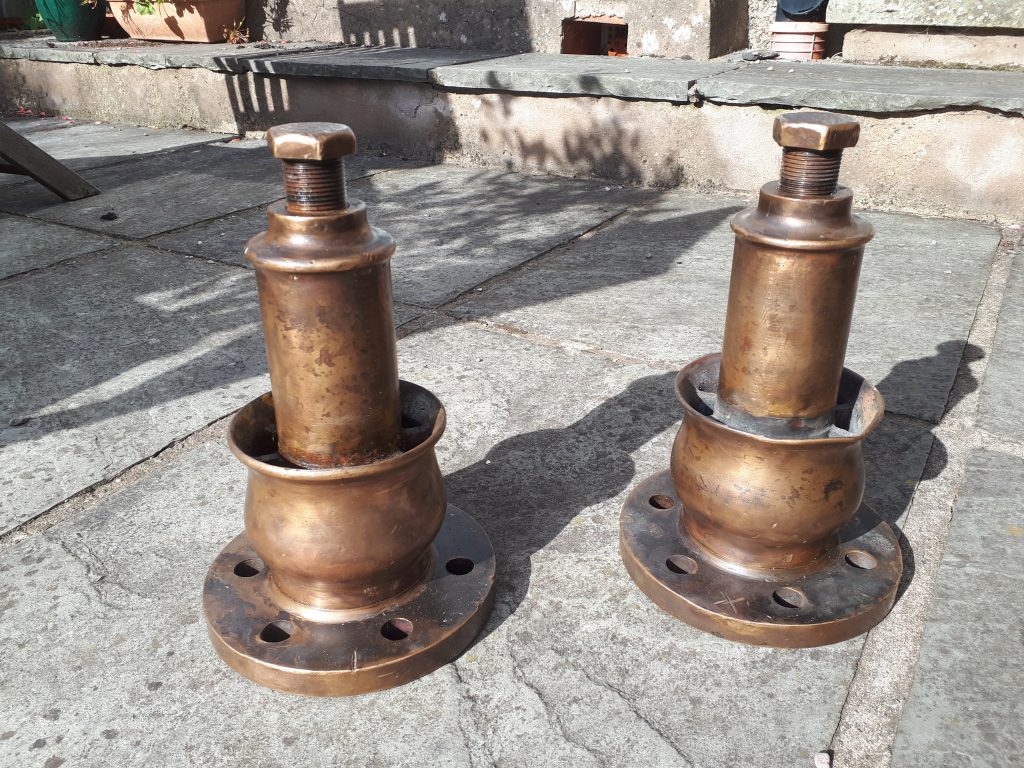 Further to this, Tim paid a visit to Crewe on Thursday to pick up the two safety valves for FR 25 from L&NWR where they had been found sitting on the shelves in the store. They were certainly too heavy for the luggage rack on the train journey home! 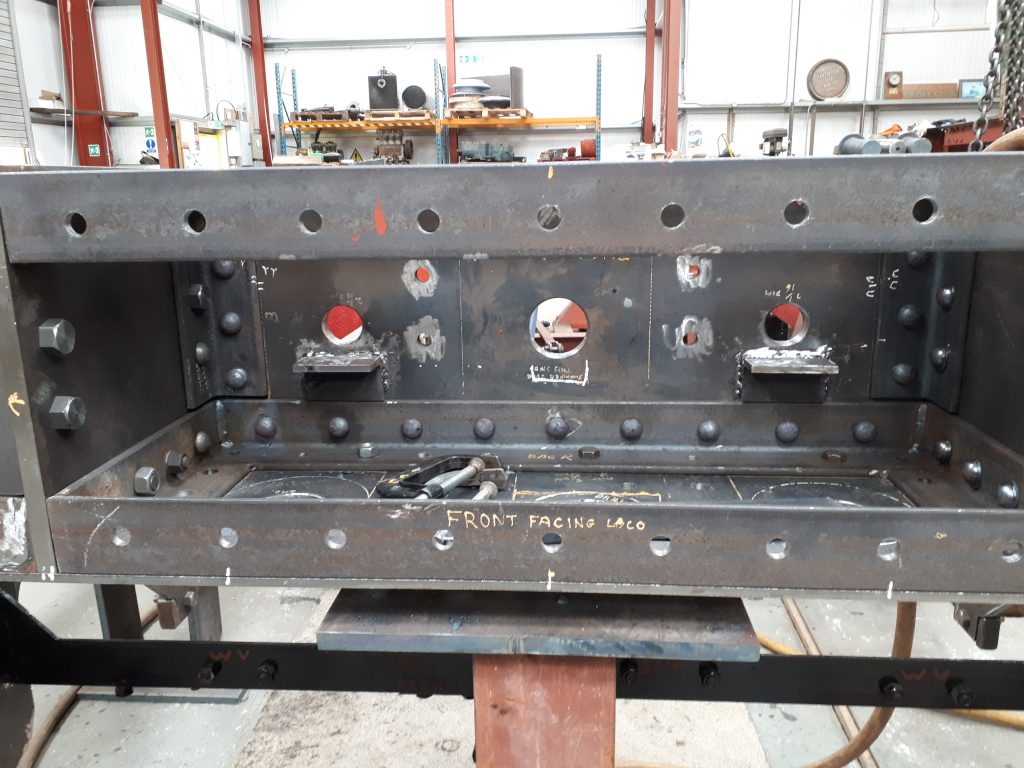 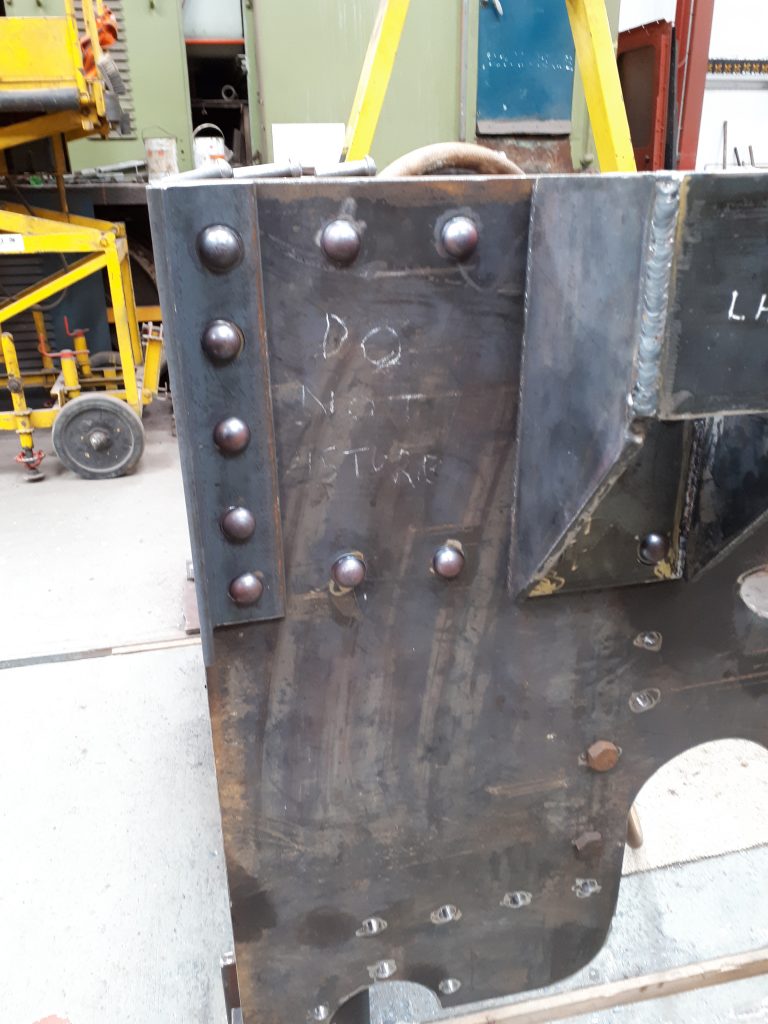 Over at Embsay, Keith was on hand last Tuesday when 5643’s boiler was hydraulically tested to the satisfaction of the boiler surveyor after re-tubing and the fitting of some new patch screws. This opened the way for the re-assembly of the loco and a new brick arch was fitted on Saturday with further work programmed for yesterday.

Cumbria is still causing issues with the regulator continuing to pass steam when shut. This has caused an immense amount of frustration and bafflement. A working party visit to Embsay is provisionally planned for this next Wednesday to try and identify the cause of the problem.

The next stage in the  process of dismantling FR 20 is the removal of the chimney, dome and spectacle plate. It is planned for it to visit the RSR’s workshop this Saturday so that the overhead crane can be used to remove these items.

Looking forward to next weekend, Alison has her first Cream Tea Special booked for Sunday, 19th. There are still some seats available, so look at the RSR web site for details. You should also be able to view progress on the new playground at Preston where work on the final earthworks are due to commence tomorrow.