Work continues apace on the RSR’s TPO vehicle which is currently being repainted in the FRT shed. 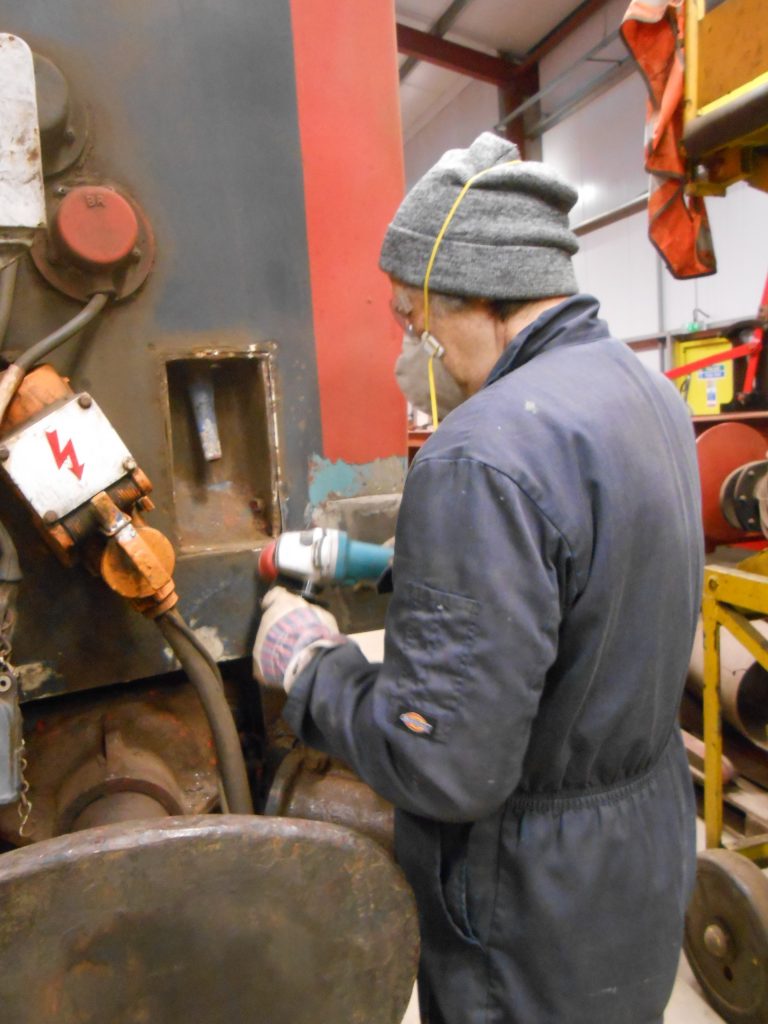 Tim has begun the task of sanding down the sides whilst Mike Rigg and John Davis have been attending to the end sockets which allow access to the water filler pipes. A new cover will be required for one of the sockets. Mike and John have also been removing the seals from around the sliding doors in order to allow access for painting. 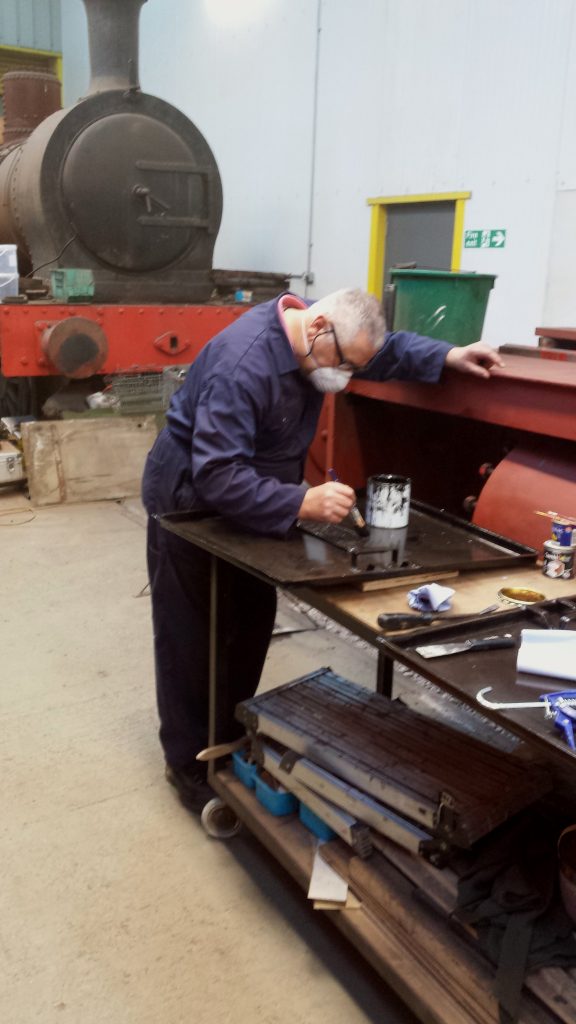 The new replacement warning sign has been affixed to the new gas compartment door and the paint touched up. 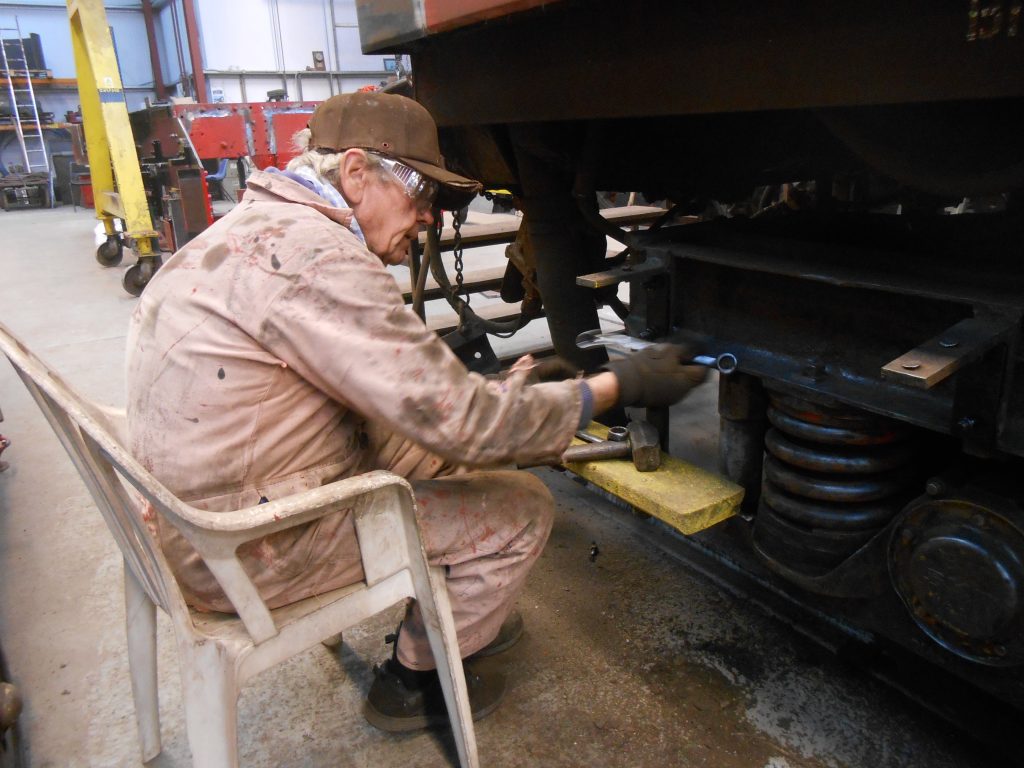 Fred has been cleaning up the bogies with a wire brush and has removed the redundant steps (the bogies came from a different vehicle) whilst Roger has begun the task of applying primer. 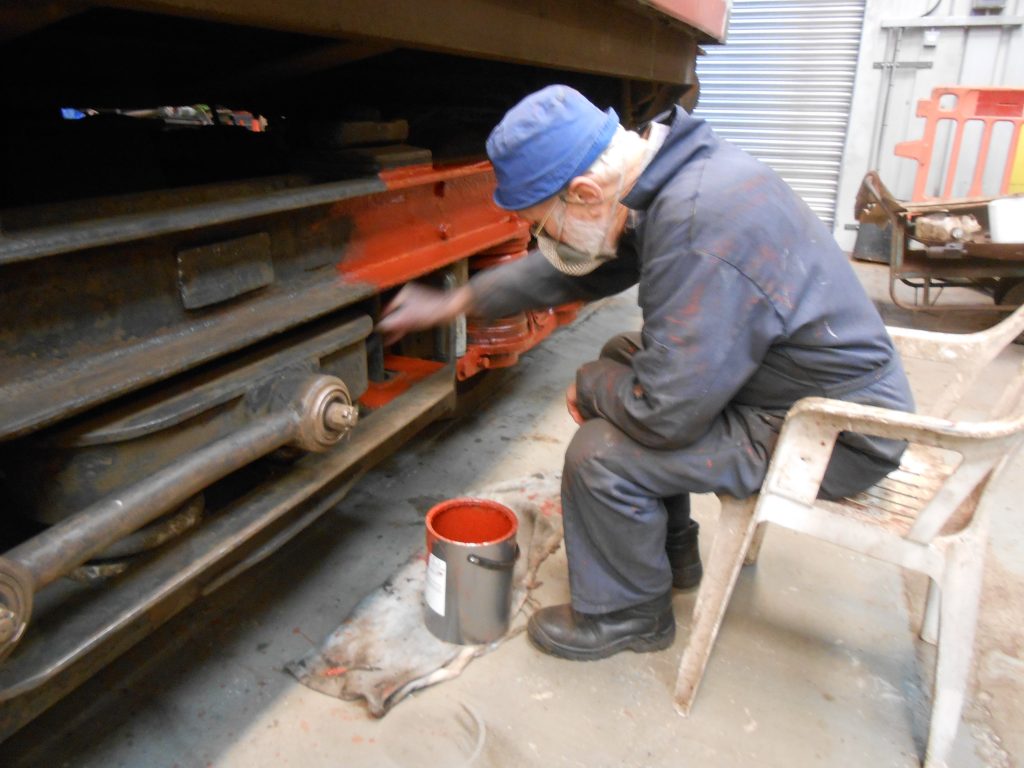 Keith has continued to work on the replacement steel ends to the Hall’s tender frames. 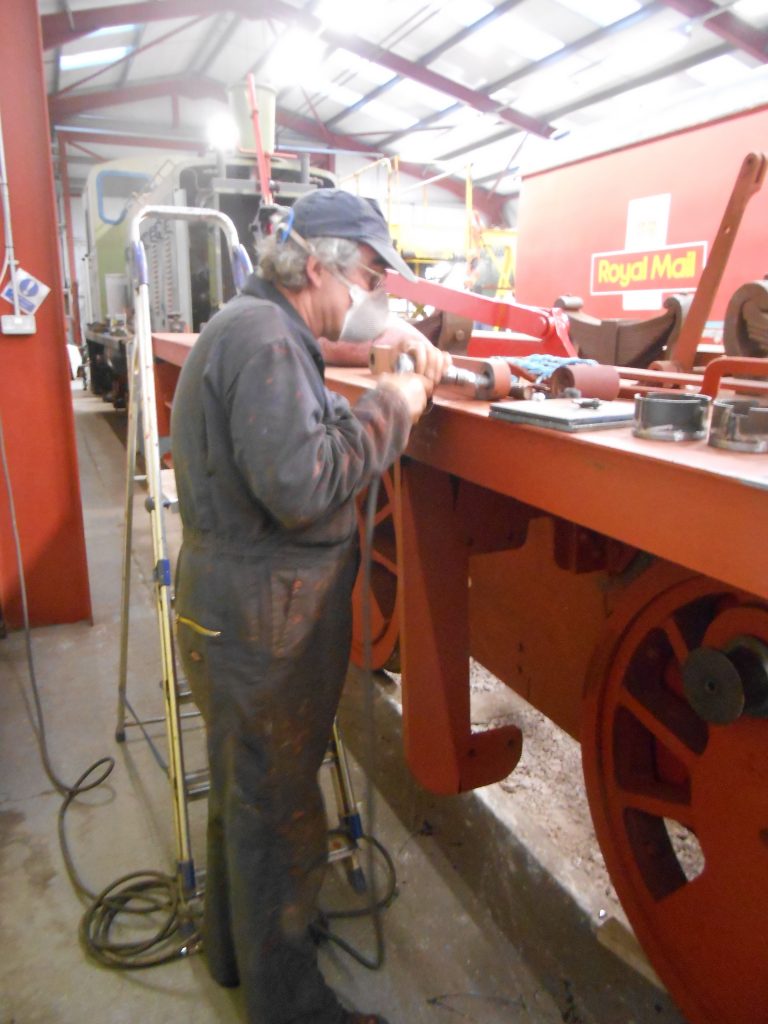 And Ade has been attending to Caliban‘s motion, seen here cleaning out one of the holes. 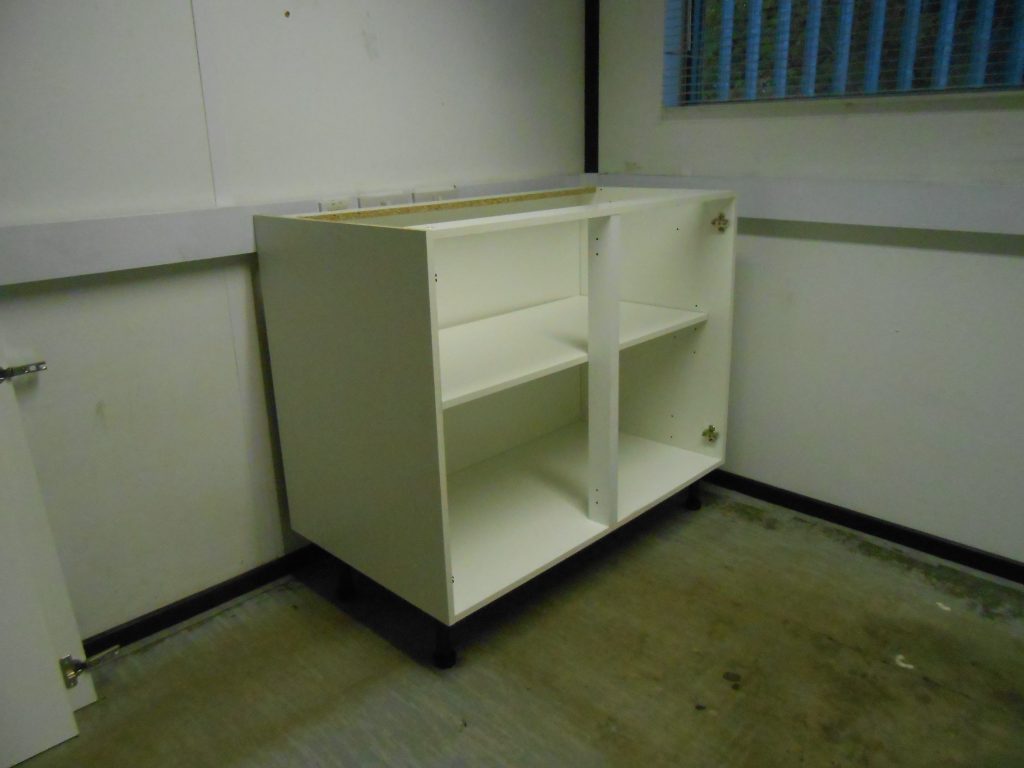 John Dixon has continued the task of fitting out the kitchen area of the new mess room and has found that Wickes now have a kitchen sale as well as a 15% discount because they are reorganising the store! 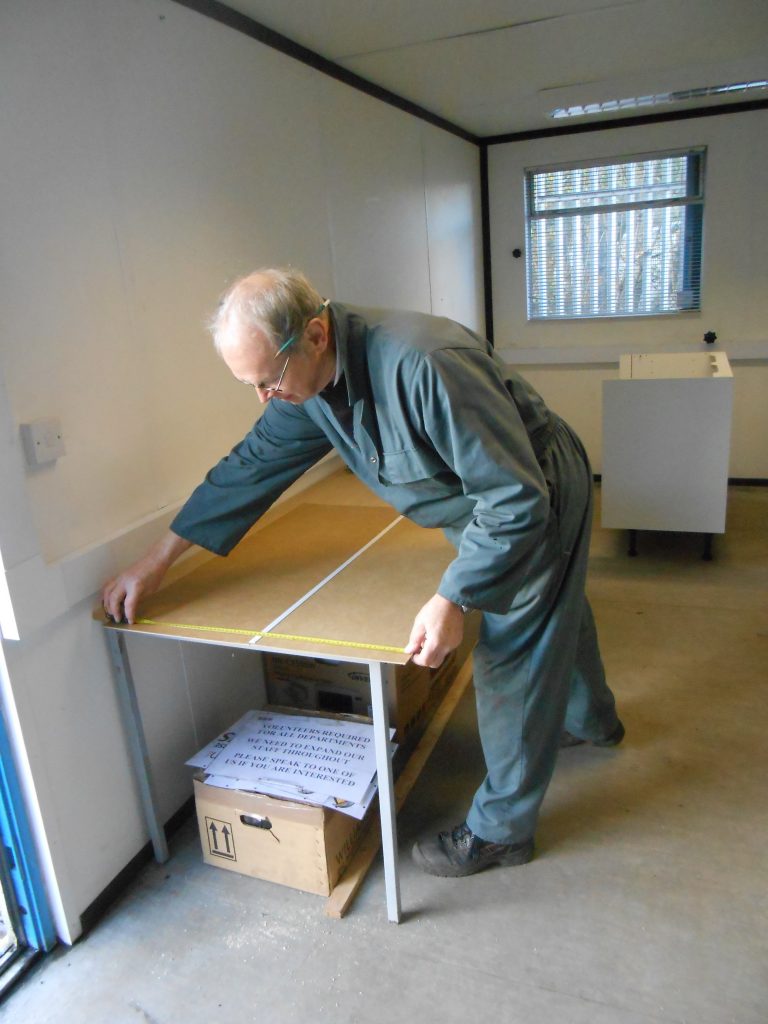 Cue the purchase of a new three metre work top! 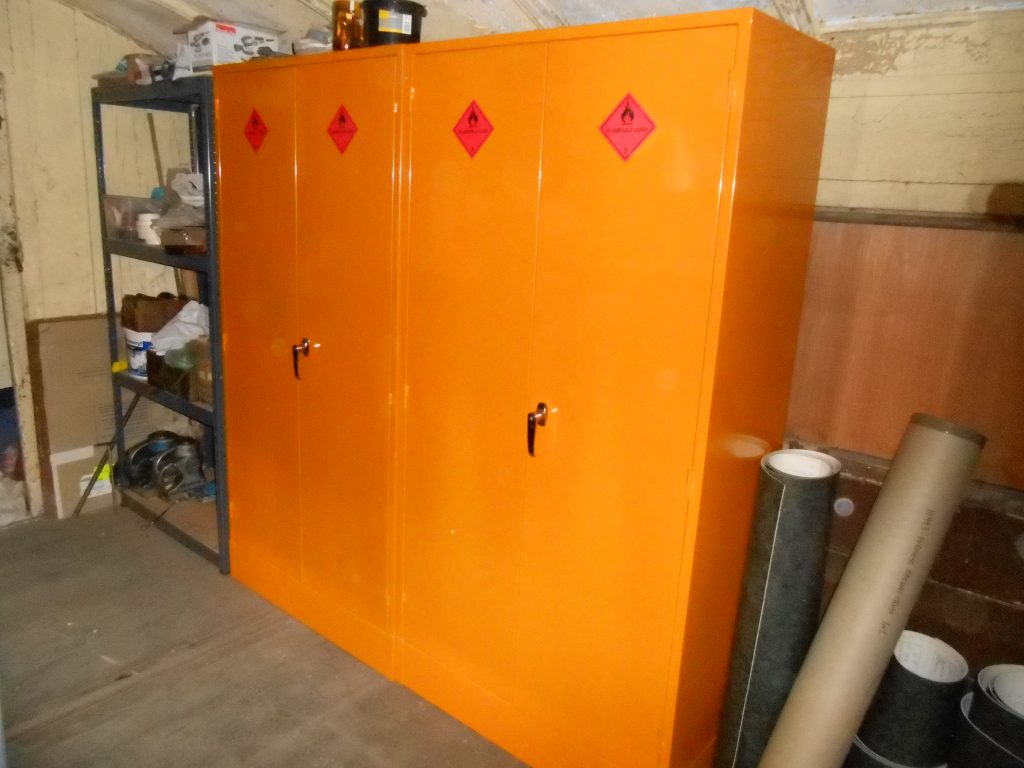 Two new cabinets for the storage of paint have arrived and been filled and lights have now appeared in the 1st class North London Railway coach which is currently being used to store materials. 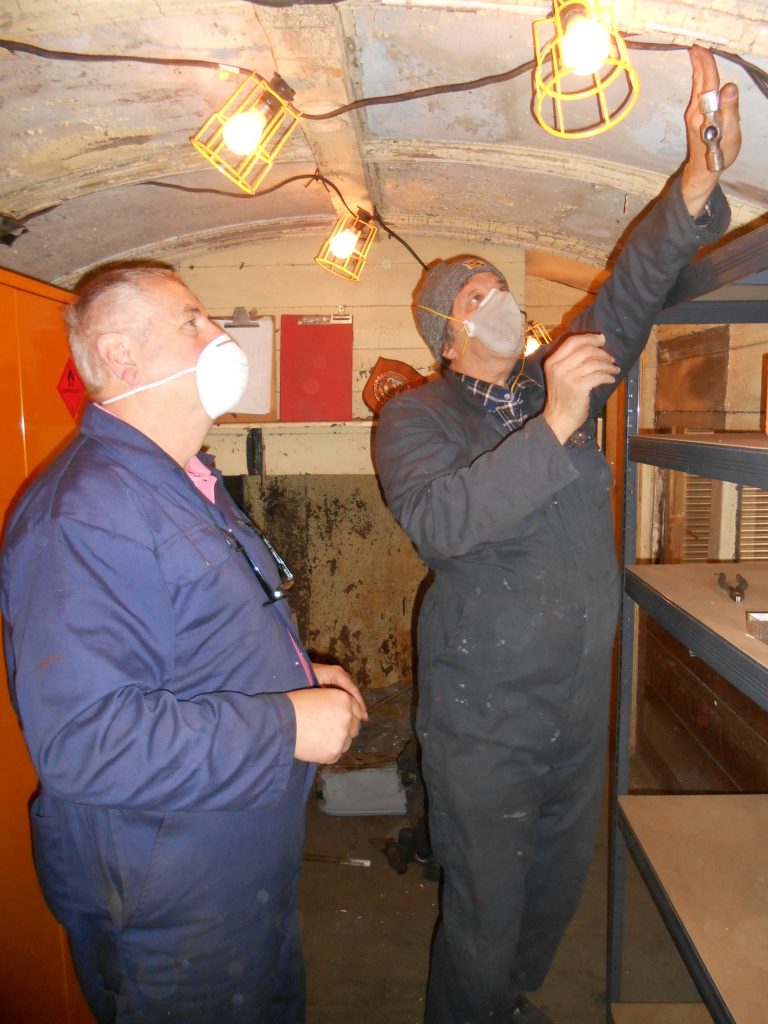 Mike Rigg has kindly taken on the role of FRT Membership Secretary following the resignation of Peter Allcock. We would like to thank Peter for his hard work since taking on the job and wish him well for the future.

The Trust’s folk group, Live Steam, has had a busy weekend with the band appearing at the Old Friends in Ulverston on Saturday evening for a Lancashire Night, seen here under the Christmas decorations. 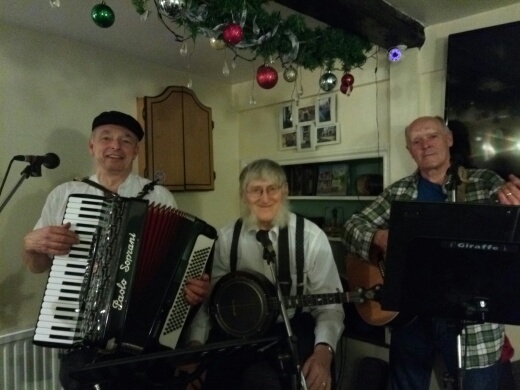 They then performed for an hour and a half at Abbeyfield in Ulverston early Sunday afternoon before being joined by George on the out door Theatre Street stage at 4 pm to close down the Dickensian Festival in fine style! 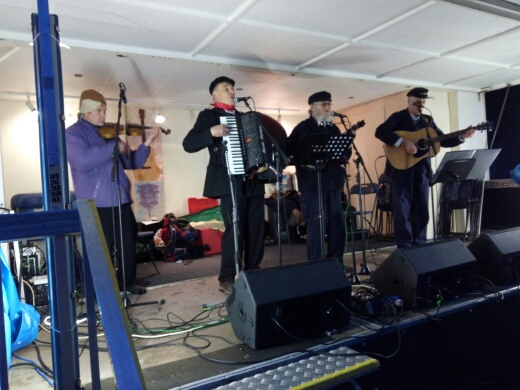 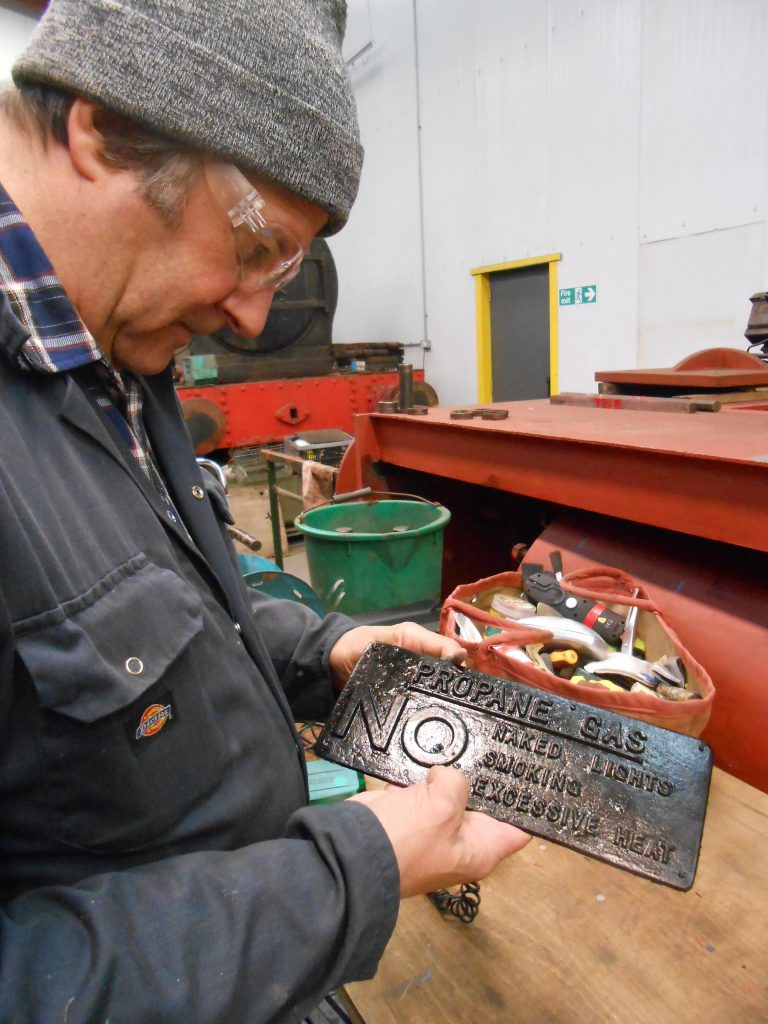 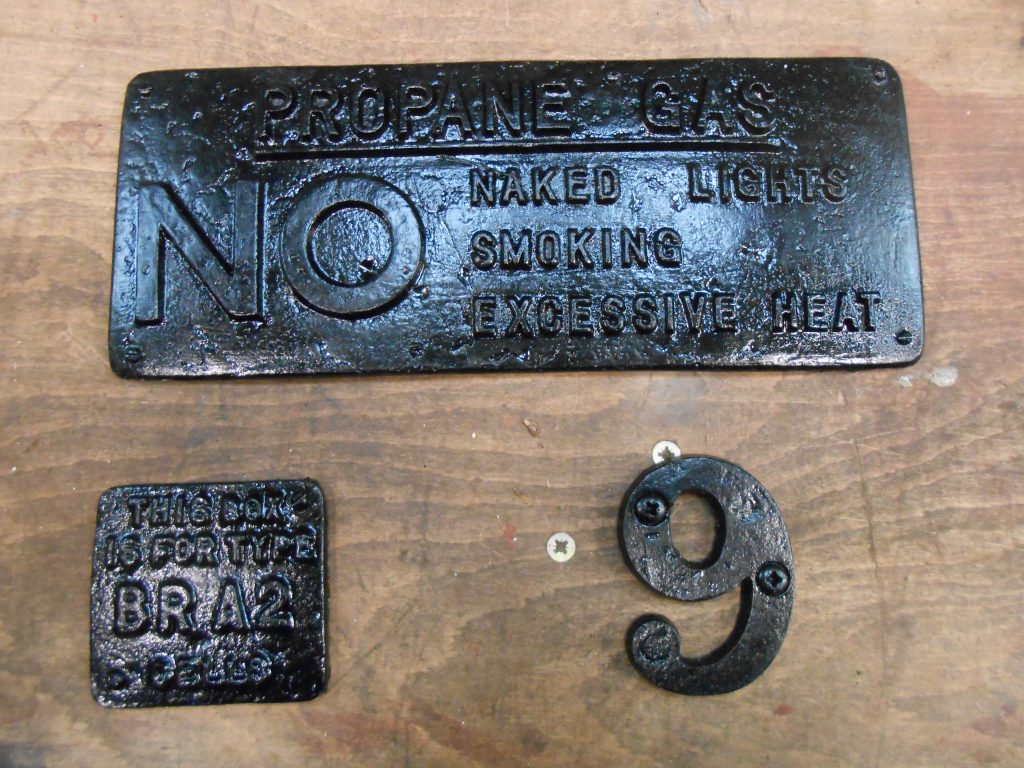 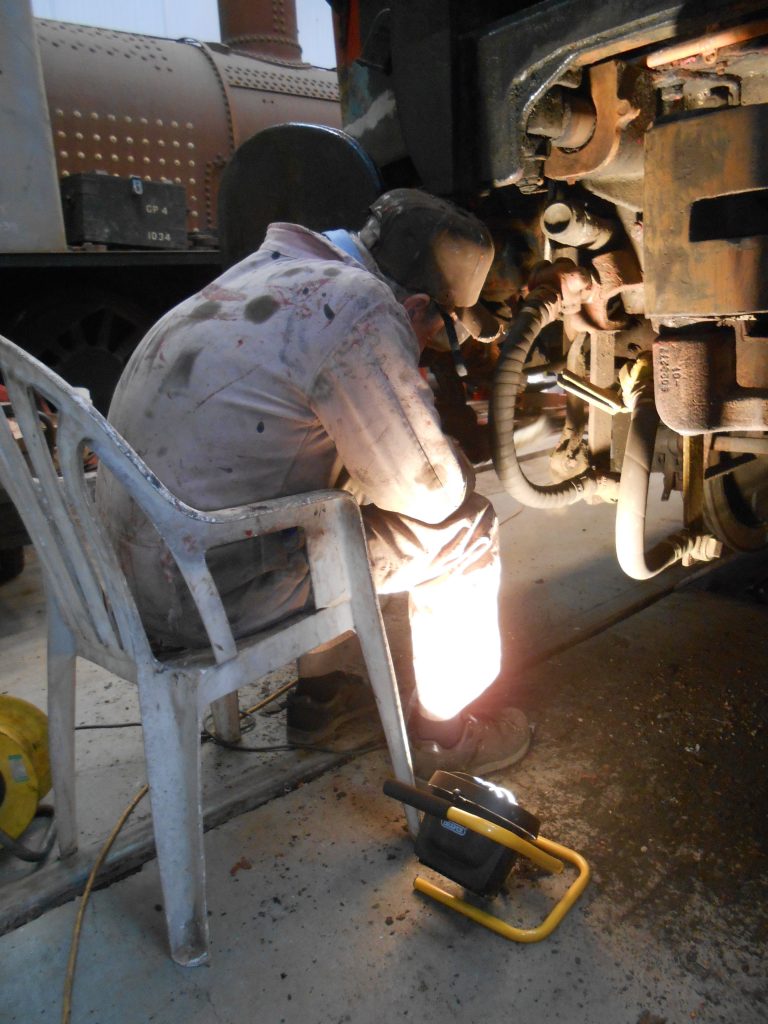 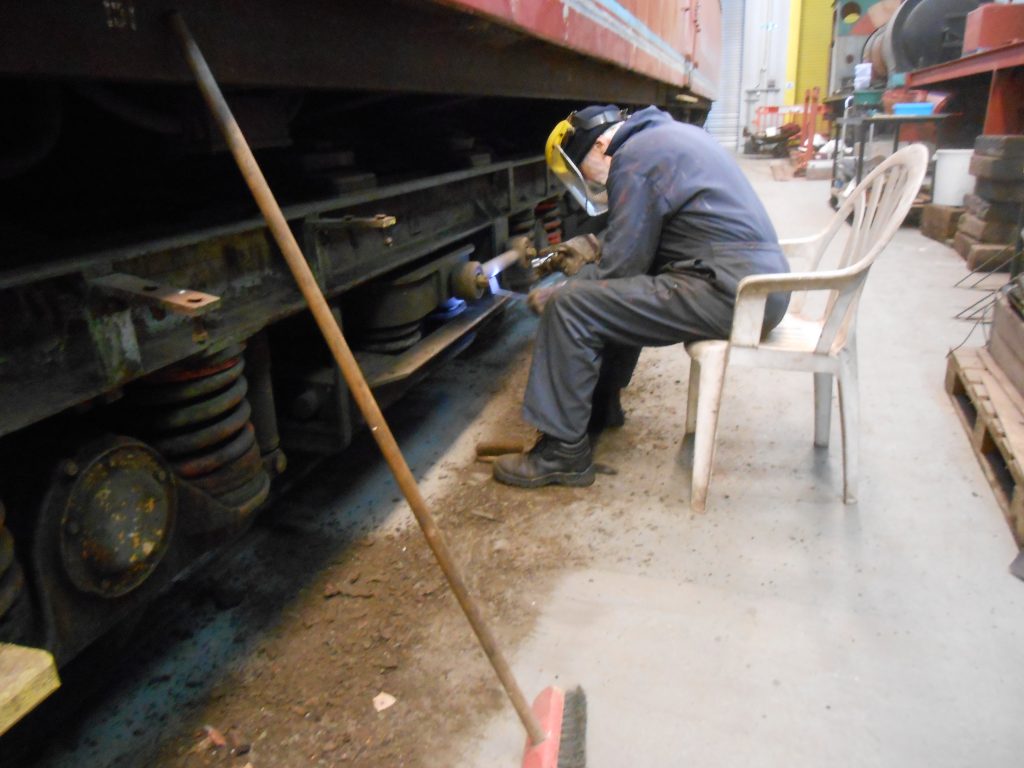 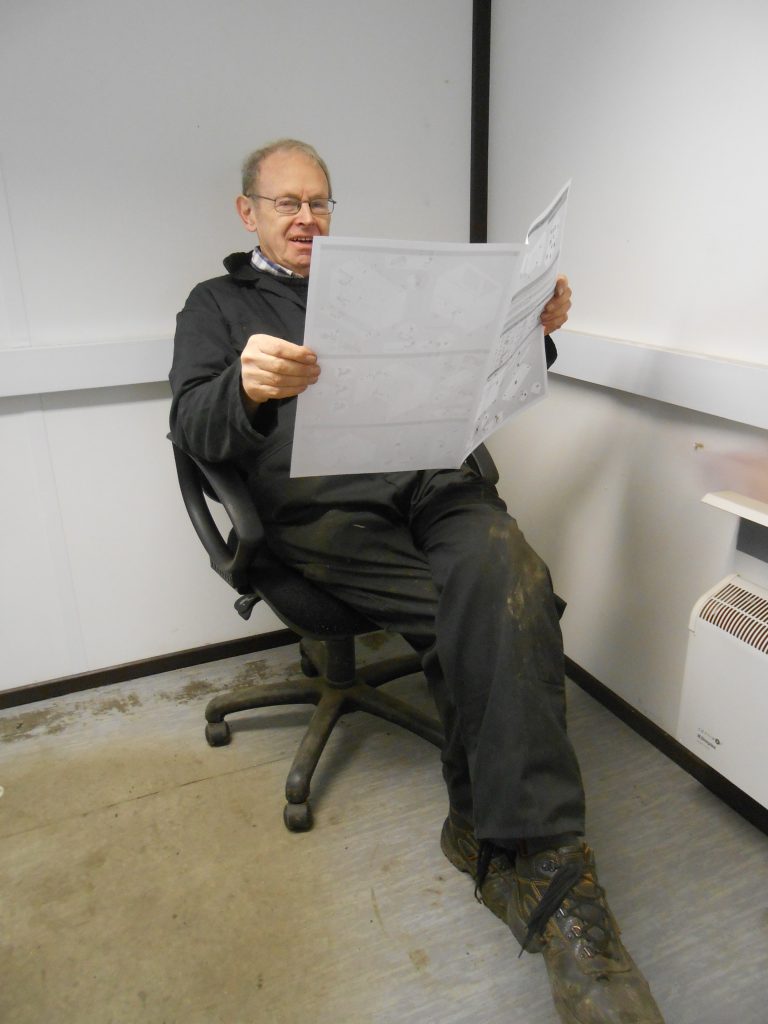 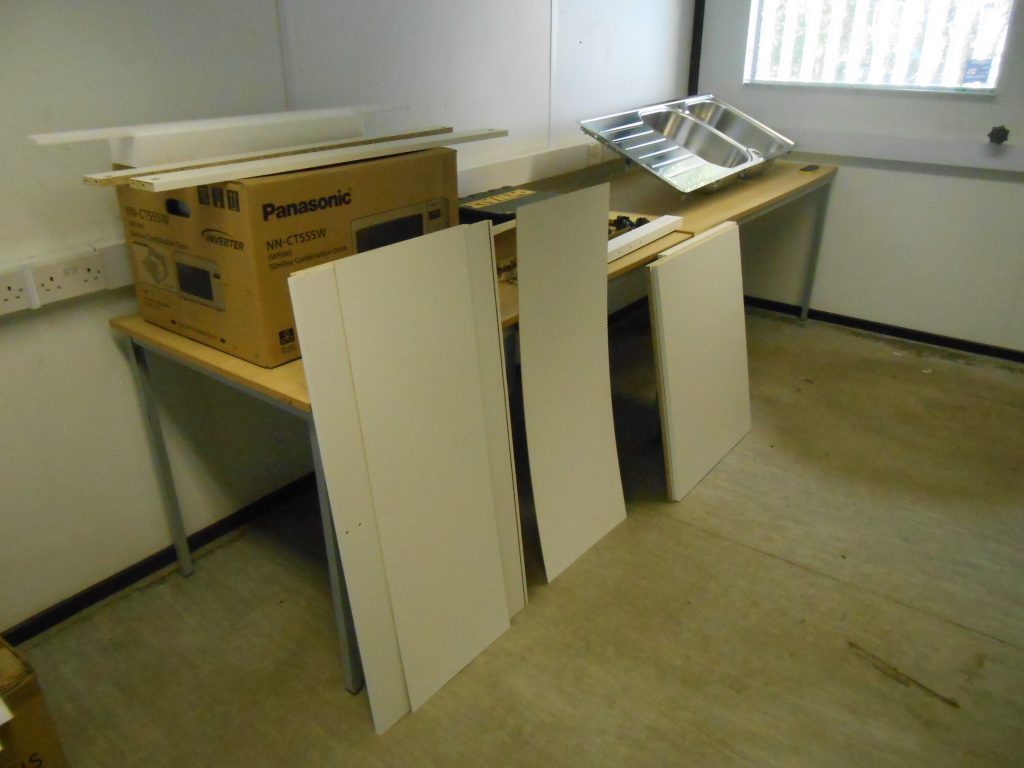 It has been a mixed week with both good and bad news.

We start with the good news in that FR20 passed its steam test in the presence of the boiler surveyor on Friday and it subsequently performed its last two booked steamings of the year at Locomotion, Shildon, over the weekend. 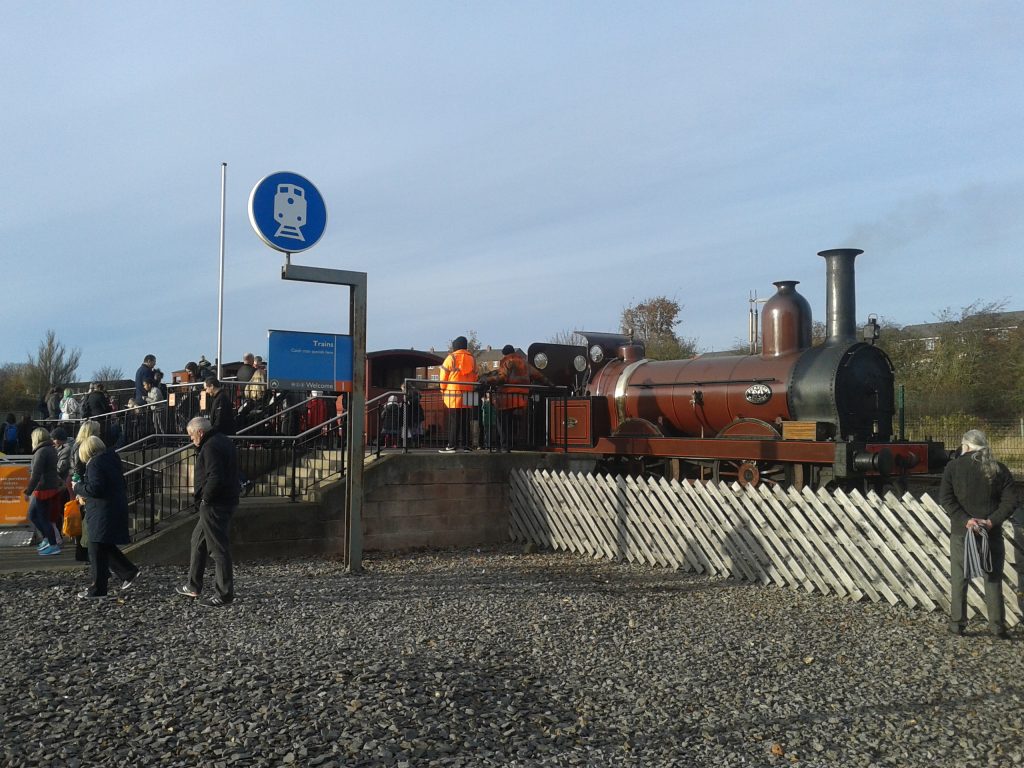 The occasion was a big Lego event featuring many, many, models and sale stands which certainly drew the crowds. In fact it was reckoned that the were more people there on Saturday than attended the Autumn Steam Gala with Flying Scotsman in steam and giving rides! It was bitterly cold, but FR20 was kept very busy hauling passengers  with Alan, Alison and Tim surviving the conditions, although Tim rues omitting to take the camper van fan heater with him and is still trying to thaw himself out!

Now for the bad news. 5643 has been stopped at Embsay following the discovery of two failed tubes. A site meeting was held on Sunday at which Keith attended and the matter was discussed at a meeting of the Trustees last night. The Trustees decided to order the replacement all the tubes in the boiler, rather than just those which have failed, to best ensure reliability in the future.

Work continues at Preston with Keith cutting the second piece of steel to replace wasted metal on the tender frames. When both sides have been drilled and lined up, the new pieces will need to be welded permanently into place. Adrian continued his work on sanding and painting Caliban‘s rods and Alan Ogden made some more progress with Fluff.

John Dixon has finished varnishing inside the RMB and has made a start on assembling some steps to the door of the mess room.  Mike Rigg tested the beer cooler in the RMB and found it to be in order and then he and John Davis mopped the floor, including the toilets. There is little now left to be done on the RMB.

Finally, Tim made a start on painting the RSR’s TPO vehicle roof and managed to cover two thirds of it with undercoat grey. Then on Friday, Fred and Roger then set about cleaning the buffer beams and bogies ready for painting.

We’re sad to start this week’s blog with the news that Ron Flanagan, long term friend and business partner of Alan Middleton for over 35 years, died in hospital last Tuesday. Ron was well known to many of our members and was certainly a larger-than-life character who worked at Courtaulds at Preston with Alan. They set up the Victoria Engineering partnership together in 1981, which produced many items for the FRT at very favourable rates over the years. 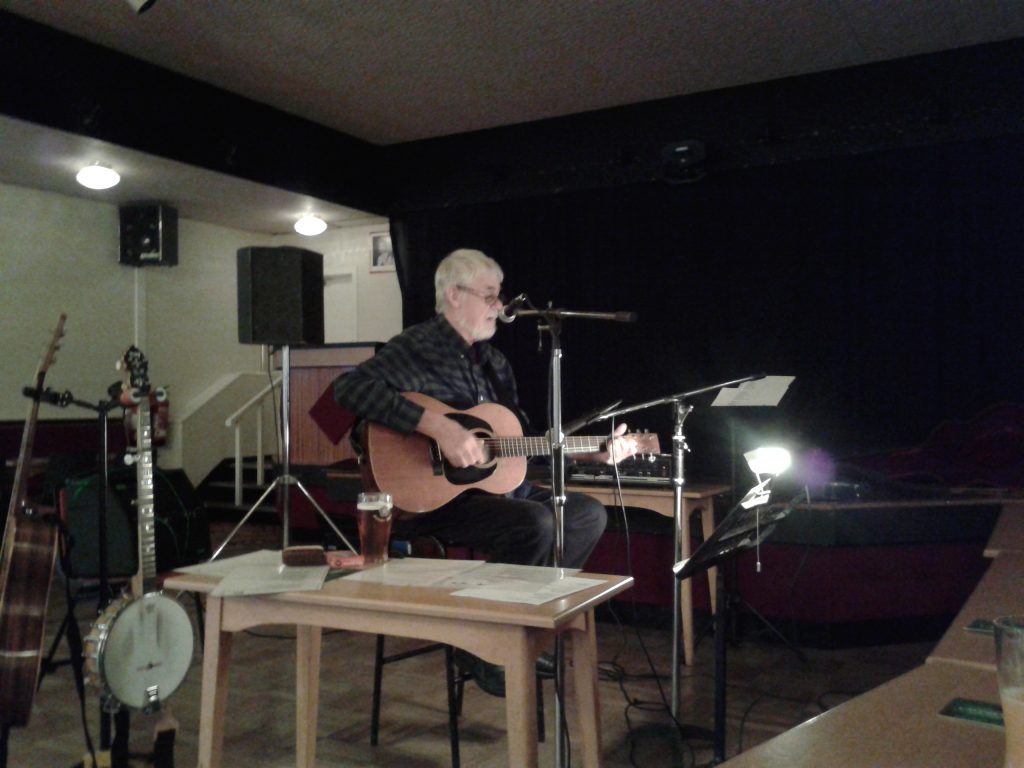 Ron was also a local folk legend, having spent his earlier years playing with the late Brian Dewhurst (who coincidentally died the Wednesday before) in the band ‘Horden Raikes’ and, in more recent years, running Longridge Folk Club – he is seen playing there in June 2015 when our own Live Steam were the invited guests. There will be a service at St Paul’s Church, Berry Lane, Longridge, at 12.00 on Tuesday, 14th November followed by committal at Preston Crematorium. Our thoughts and condolences go to Ron’s wife, Barbara, daughter Jennifer and their family.

Stop press: we have just received the further sad news in the passing of Graham Twidale today (Monday) at 4 pm. Graham was a former LRS driver on the L&HR and then went on to become a senior tram driver at Blackpool and to write a number of books on trams. Again, our condolences go to Graham’s family.

Last Tuesday saw the usual suspects of John Dixon, Fred, Tim and Alan meet at Junction 36 before heading off to Shildon for a dirty day out with FR 20. They were met there by local member, Brian Goodfellow, and soon set about preparing FR 20 for its appointment with the boiler surveyor last Friday. 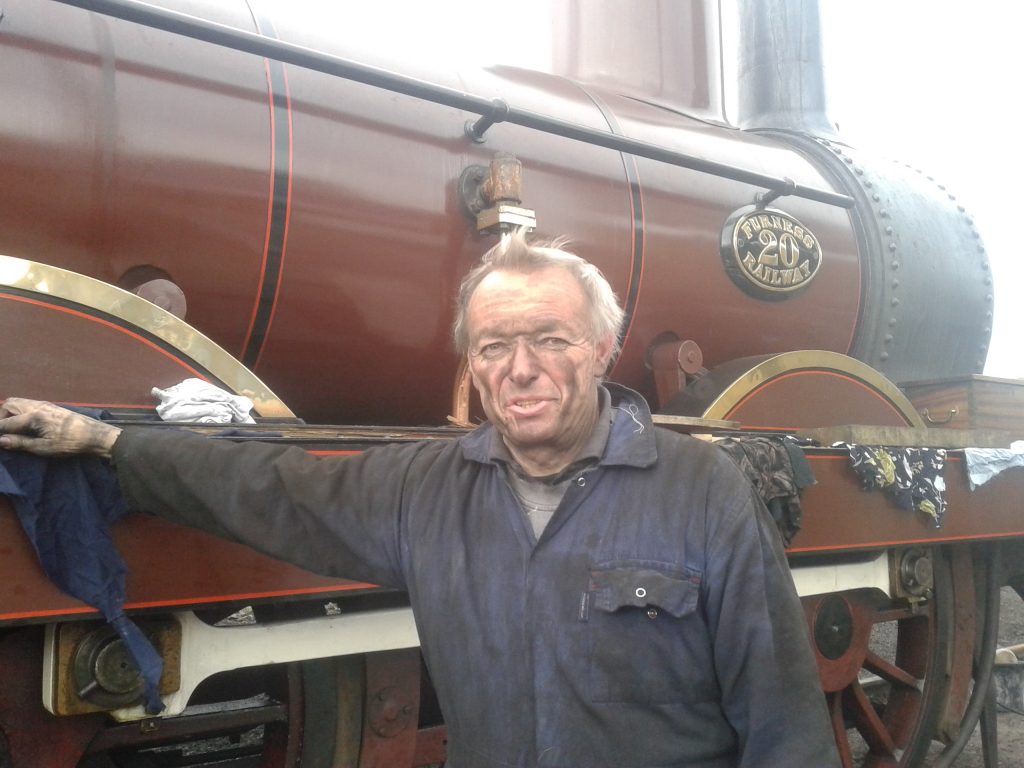 Tim once again found himself to be the only one professing to be able to crawl through the firehole door and remove the grate. 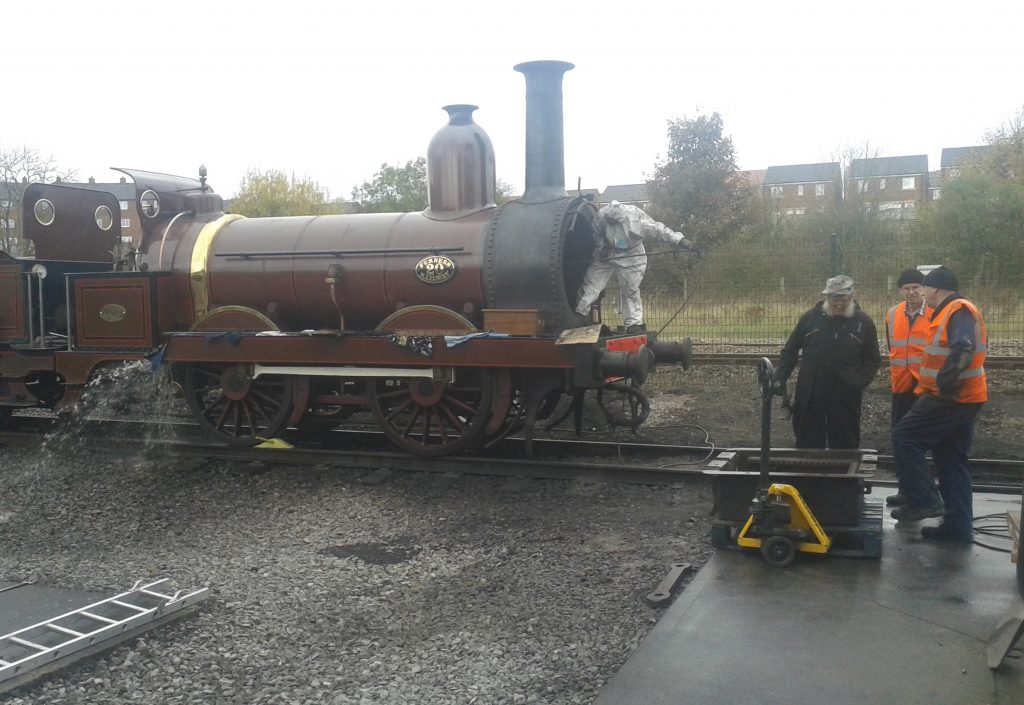 Fred blew out the tubes and he and Tim then vied for the ‘dirtiest looking member of the day’ competition by cleaning out the smokebox and firebox respectively. 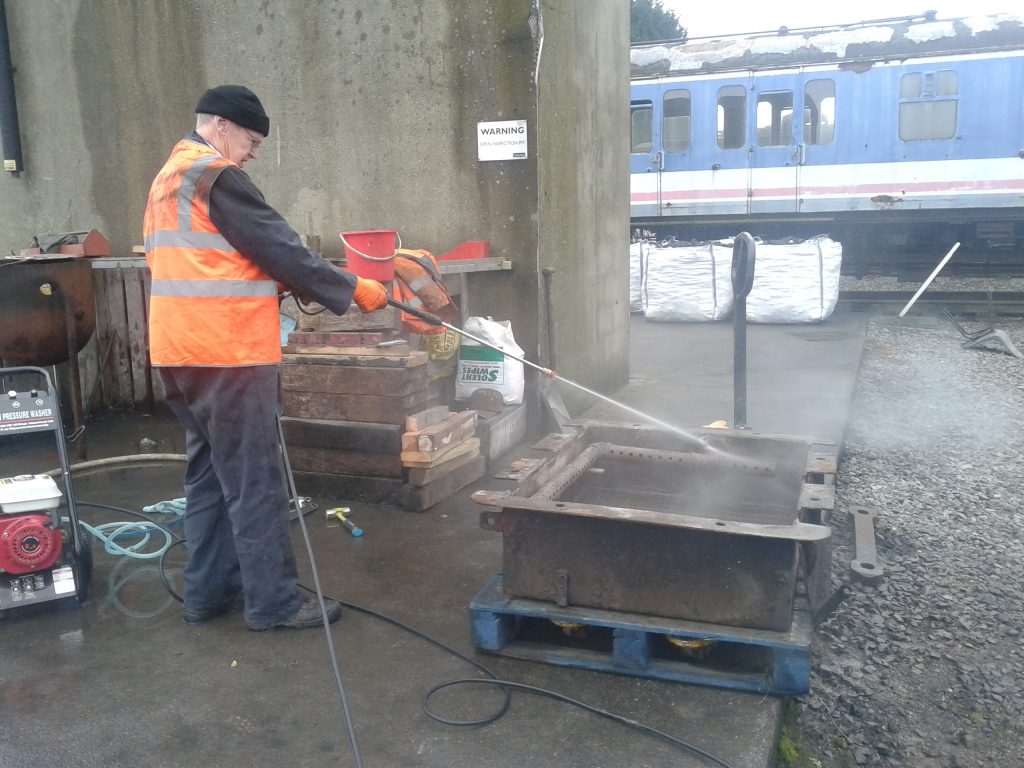 The new power washer was tried out by cleaning the ashpan before being used to wash out the boiler. Unfortunately, once it had run out of petrol and been topped up again, it developed a petrol leak and refused to start up again – so back to Preston for further technical examination! However, the day was successful and our boiler surveyor was able to give the thumbs up when he undertook the cold examination on Friday. There will be a further meeting at Junction 36 on Thursday morning in order to reassemble FR 20 at Shildon in readiness for its steam test on Friday. All being well FR 20 will be in operation at Locomotion on Saturday and Sunday in connection with a Lego event. Alan, Alison and Tim are planning to accompany these last planned steamings for the loco in 2017.

Back at Preston, the RMB is due to be ferried around to the RSR’s running shed any time now ready for commissioning back into service. John Dixon, John Davis, Mike and Paul all continued with minor finishing jobs on the vehicle, including painting some of the heater covers and varnishing wood work.

Tim cleaned the roof of the RSR’s TPO vehicle on Wednesday before applying primer paint to any bare metal. Fred and Roger then cleaned the corridor ends on Friday in readiness for filling and sanding. David has made a start on removing the graphics from one of the sides. so that sanding and filling can commence there as well.

Adrian made some more progress on Caliban, painting the rods and Keith has been working on the new metal for Wootton Hall’s tender frames, cutting and then drilling holes where required.

Finally, Keith has also wired up the electrics for the new mess room and John Dixon hopes to make a start with the plumbing once he has finished his varnishing work in the RMB.