Here we are, last blog of the year! 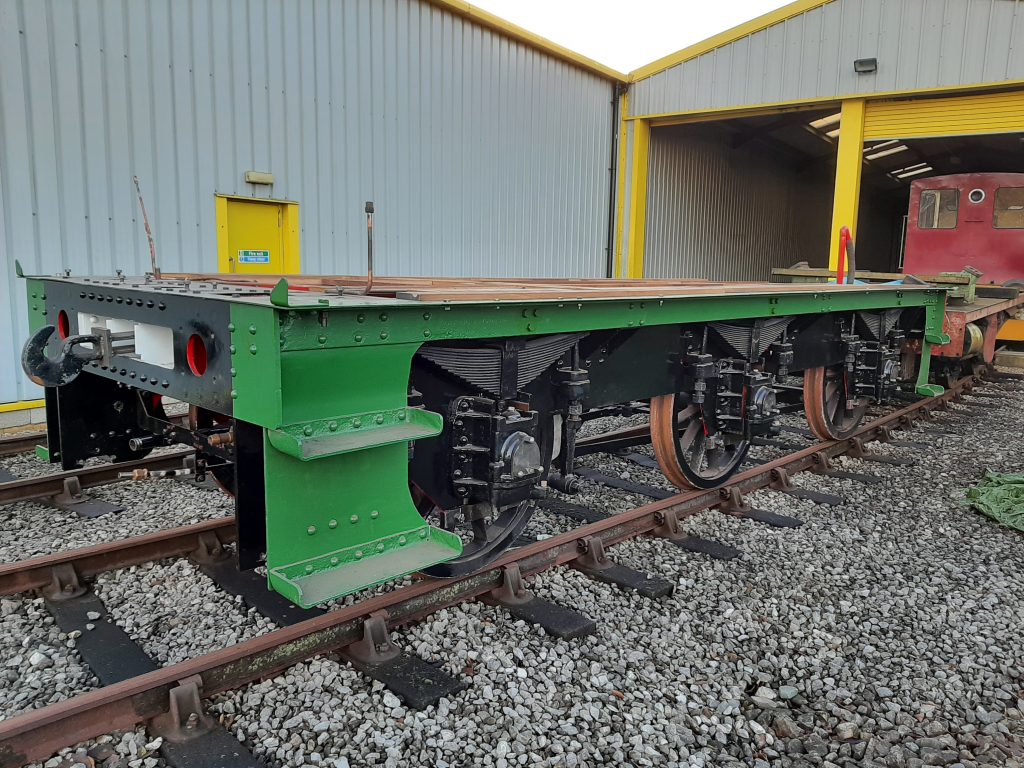 Christmas may well be nearly upon us but that hasn’t stopped work in the FRT shed. The major happening last Wednesday was a pre-Christmas shunt of the shed which moved Wootton Hall’s tender chassis to the front of the heated section of the shed. It can be seen here making its first appearance in daylight since being re-wheeled earlier in the year. There is a plan to fit the tender tank on top of the chassis on Wednesday, 5th January, hence the need to move it nearer to the shed entrance. 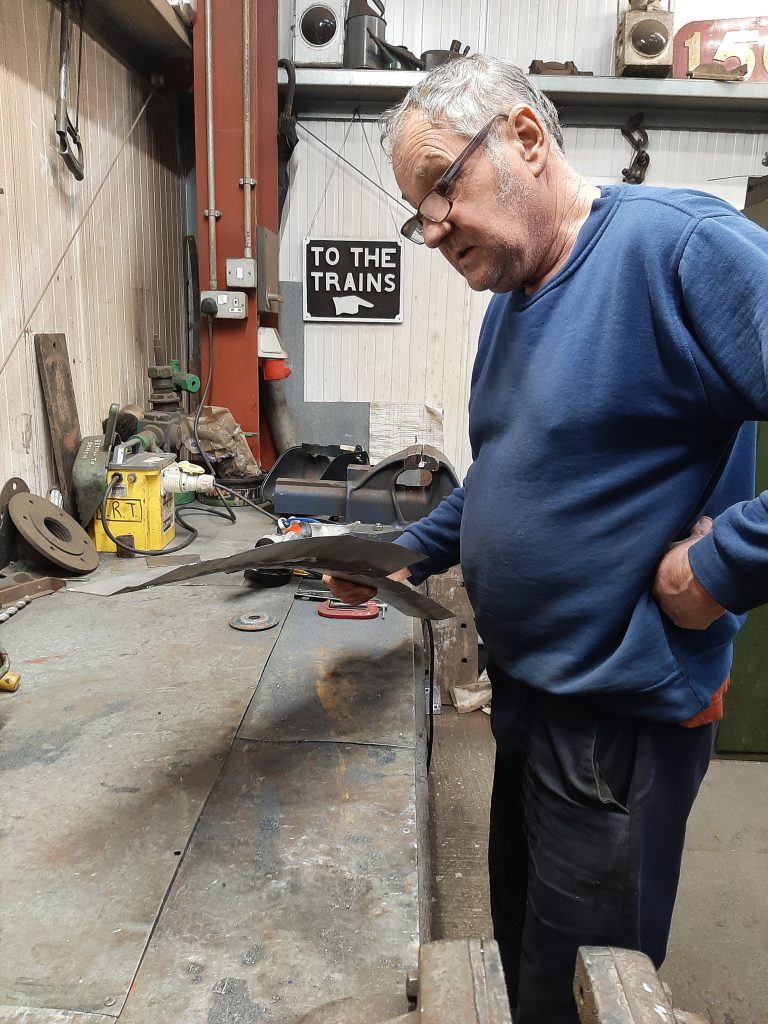 Keith has continued to work on Wootton Hall‘s boiler cladding, making up some of the more difficult (origami?!) pieces around the front of the firebox which bend in various planes. 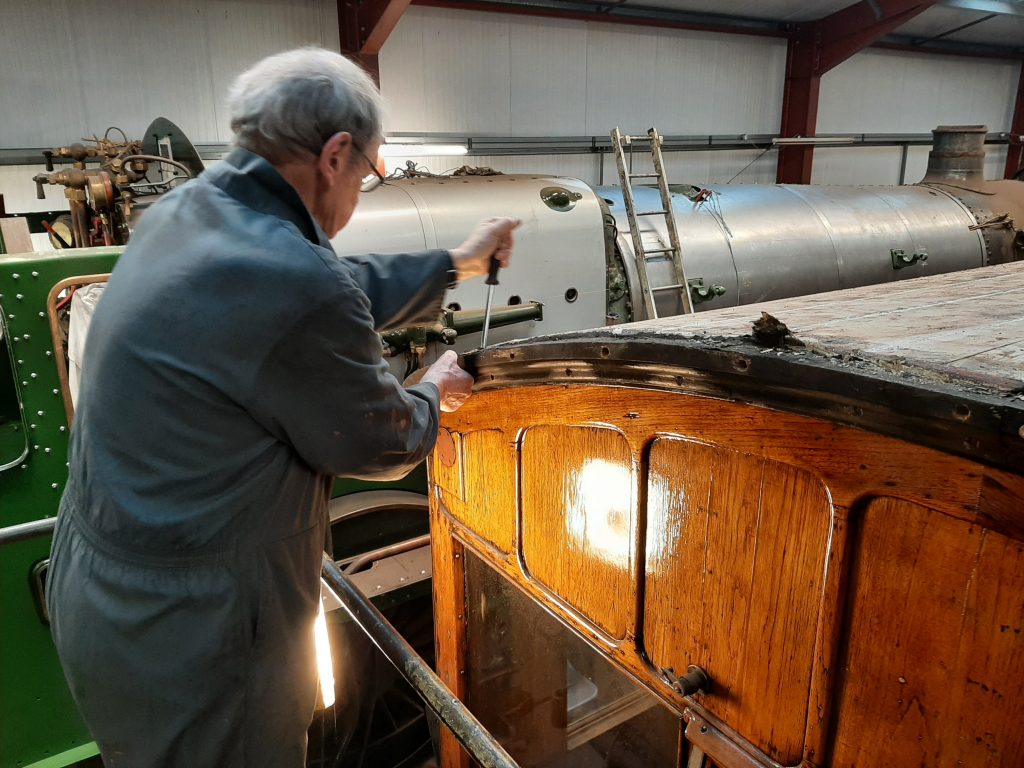 The last of the bonding compound that held the previous canvas in place has now been removed from the roof of GER Royal Saloon No. 5, and the aforementioned shunt allowed the hydraulic platform to be positioned at the west end of the vehicle to allow the end pieces of wood that hold the canvas in place to be removed. 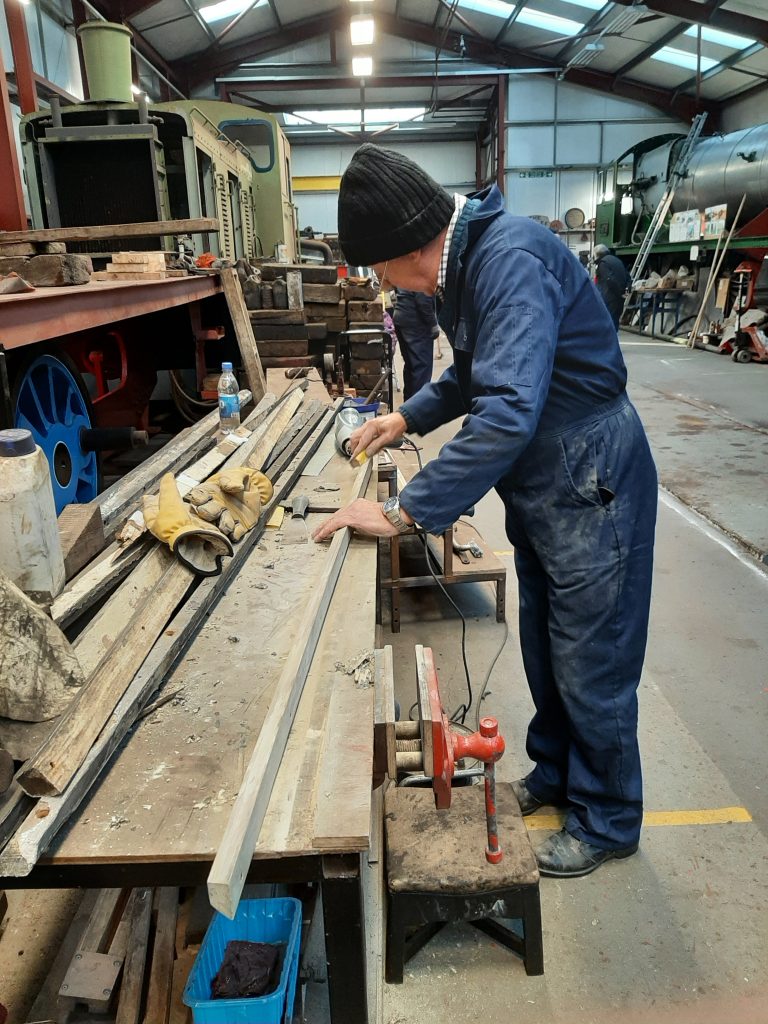 Phil Burton has been removing old paint from the roof rain strips from GER No. 5. 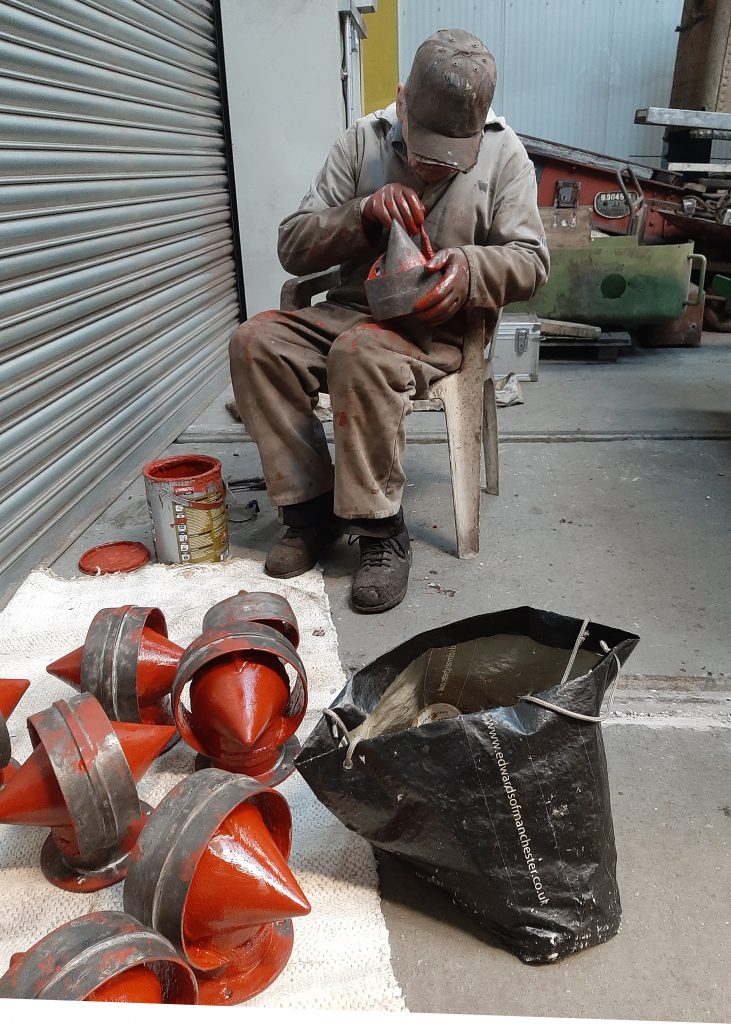 Fred, having previously cleaned the paint off the torpedo vents, has commenced the task of adding new paint. 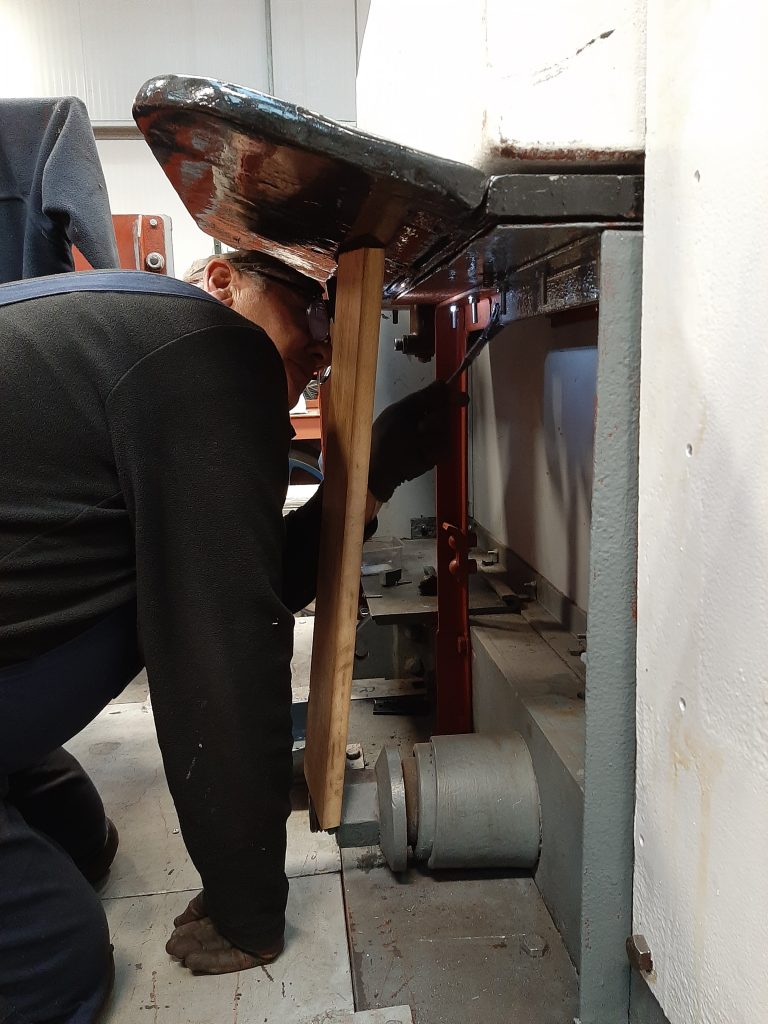 John Davis continued his quest to paint every nook and cranny in Fluff‘s cab. 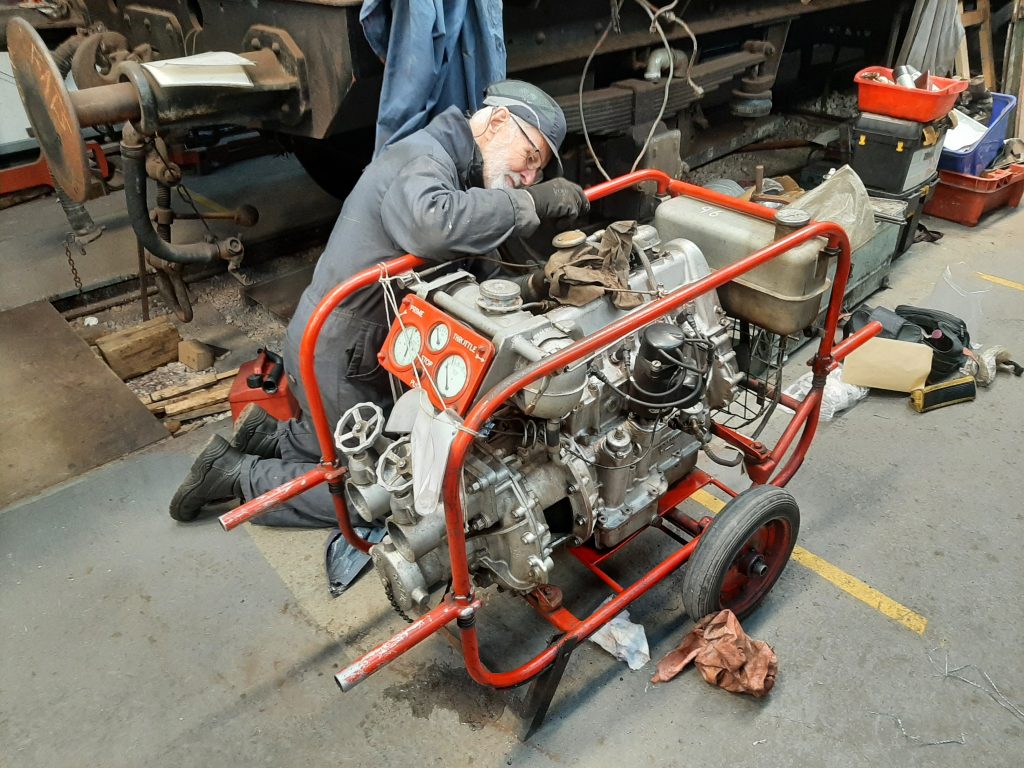 Roger spent Friday giving the fire pump a 300 gallon service and clean, in readiness for its next use.

Our folk group, Live Steam, having finished playing Christmas songs and carols for the RSR’s Santa Specials, are planning to perform at the Engine Inn, Cark-in-Cartmel on New Year’s Eve, as long as there are no changes in the Government restrictions by then.

We conclude by wishing  all our readers a very enjoyable and peaceful Christmas! 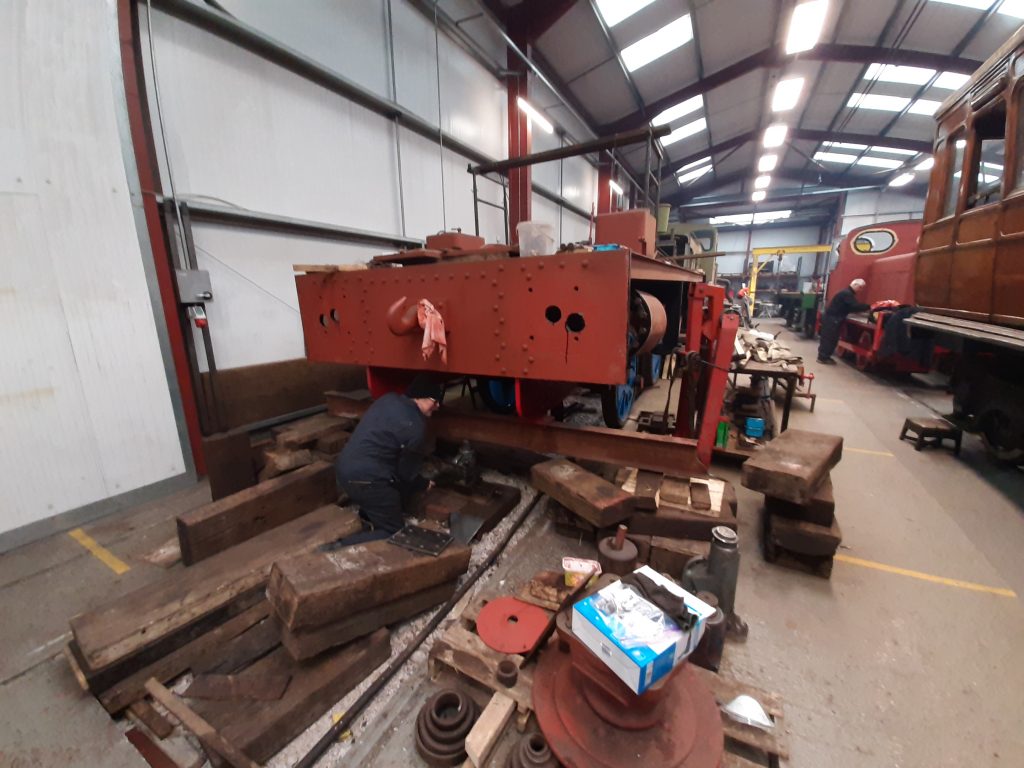 A milestone in the overhaul of Caliban was reached on Wednesday when Ade, with assistance from Alan, finally lowered the chassis back onto its wheels. 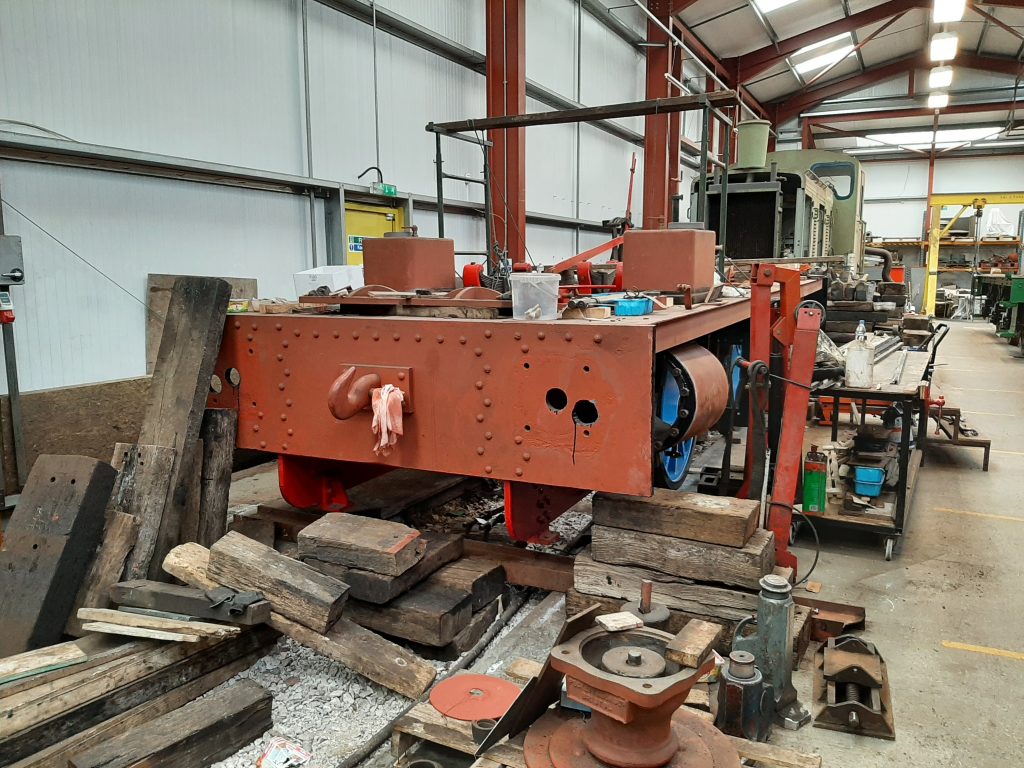 Just for the record, the operation went very smoothly with no problems in lining up the axleboxes – for once! Well done!

Virtually all the previous canvas bonding compound has been removed from the roof of GER No. 5, with just a narrow strip on the south side to be tackled. The new canvas and bonding paste arrived last Wednesday so we look forward to seeing that laid on the roof in the New Year, once the roof has been sanded and received a coat of primer. 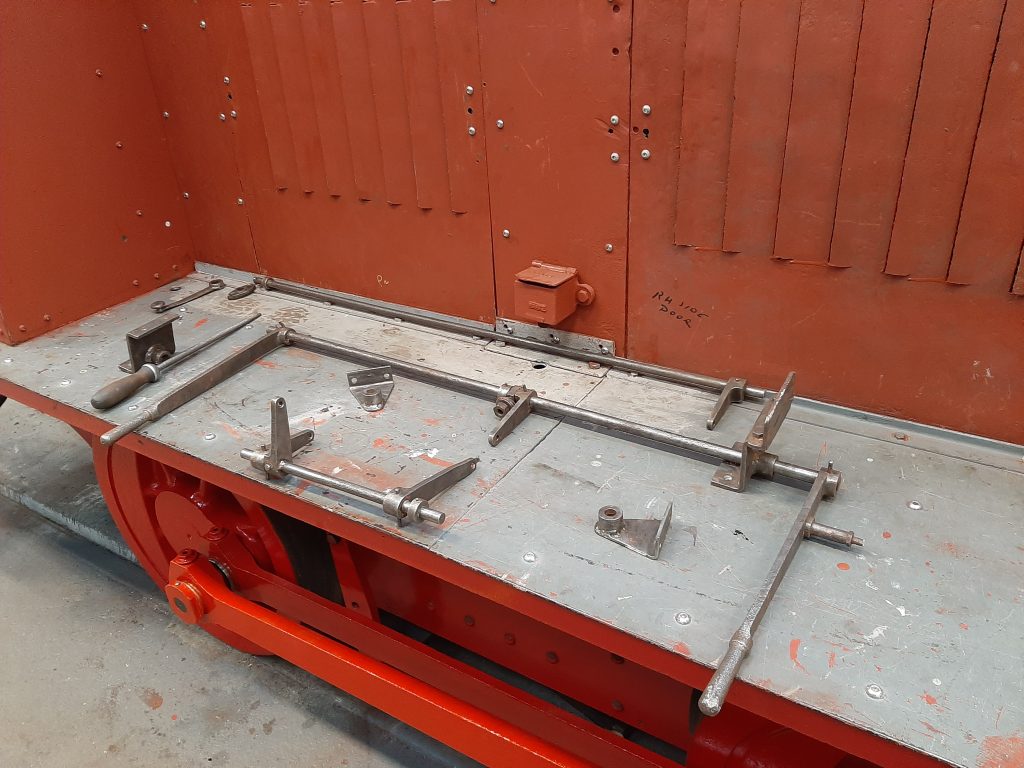 Some of Fluff‘s cab controls have been cleaned up and have been laid out ready for painting. 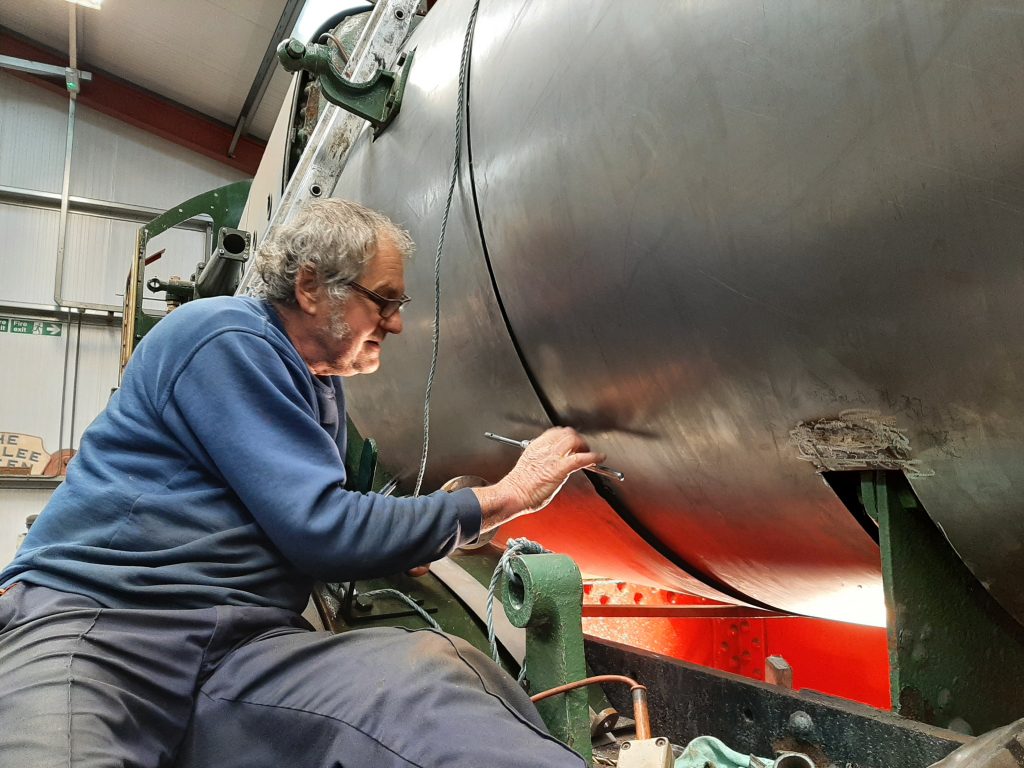 Work on Wootton Hall has continued with Keith seen here tapping a hole in the cladding, most of which has now been fitted. 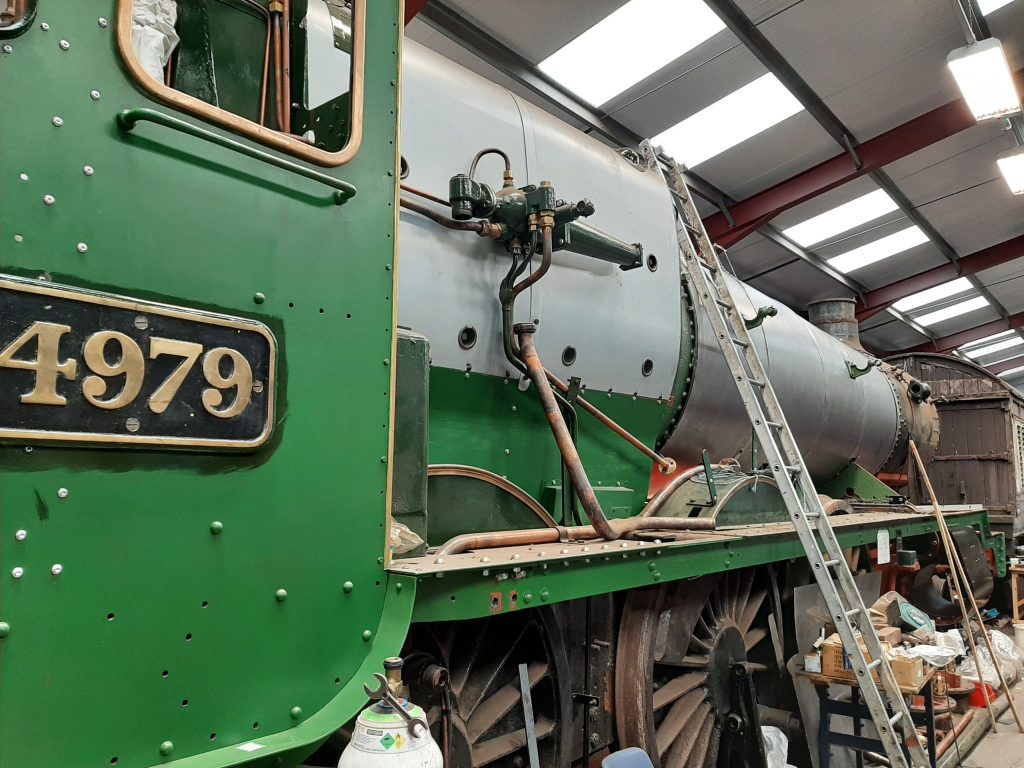 There remain the tricky items to fabricate and fit around the front corners of the firebox.

Talking things Great Western, there’s been another stunning photo of 5643 on the East Lancashire Railway…

Stunning winter photo of 5643 taken on 28th November by Mike Taylor. It was bloody cold but makes for a lovely snowy scene! pic.twitter.com/7dhtkEKRQU

Finally, the latest edition of The Iron Horse has been proof read and despatched back to the printer so, hopefully, you will all receive your copy in time for Christmas.

Already it’s the last month of the year – how have we got here so quickly?! 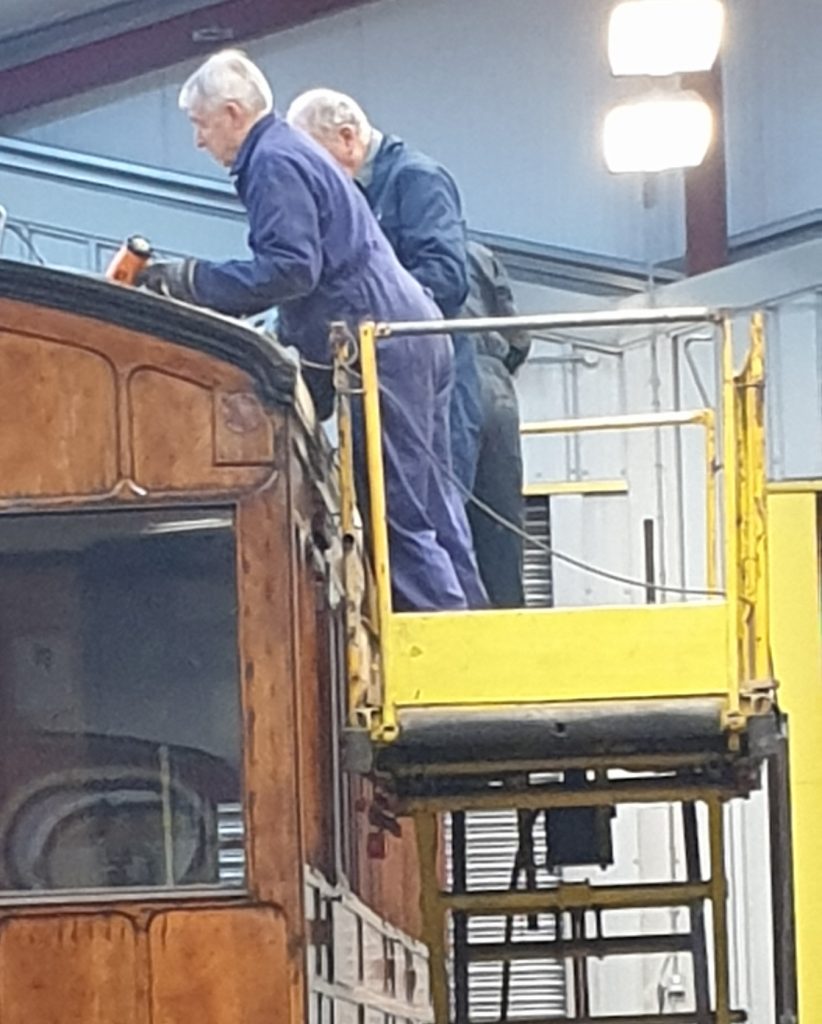 There was a real push this last week to clear the roof of GER Royal Saloon No. 5 from the bonding compound that had held down the previous canvas. It has been a long job with around 500 square feet of wood to clean, heat guns and scrapers being the most efficient method. 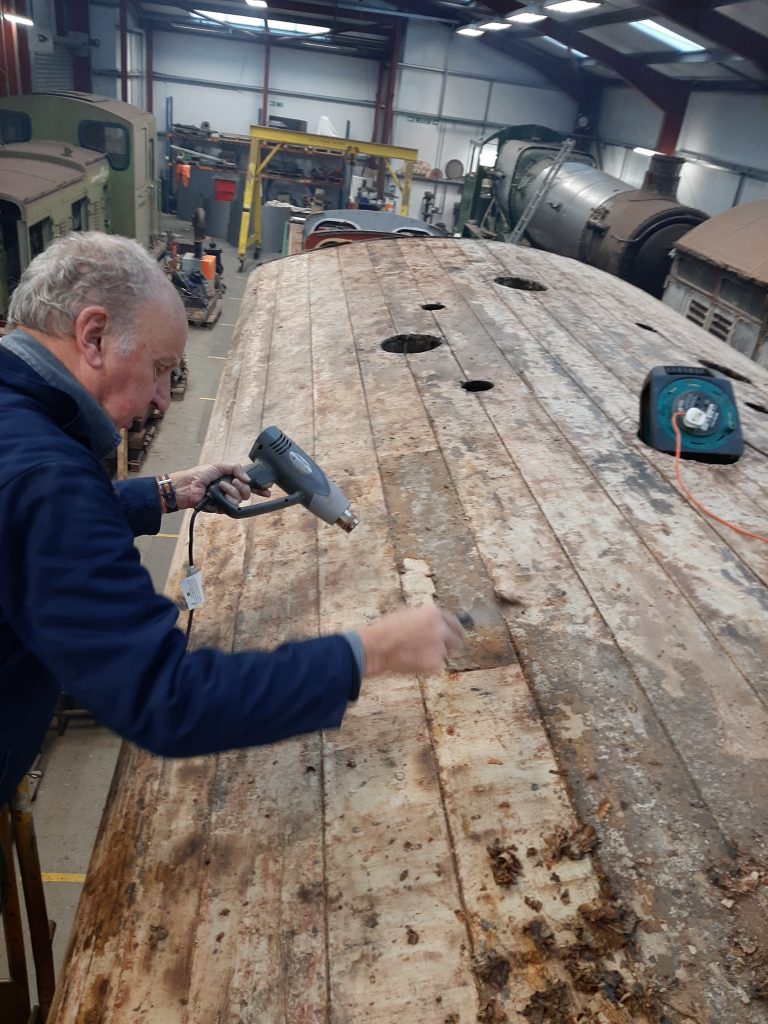 Phil Burton (seen here), Ed, Paul Balshaw, John Dixon and Tim have all spent time on the job this week and we are now on the last lap. It will then be necessary to sand down the wood and apply a coat of primer before tackling the job of fitting the new canvas. 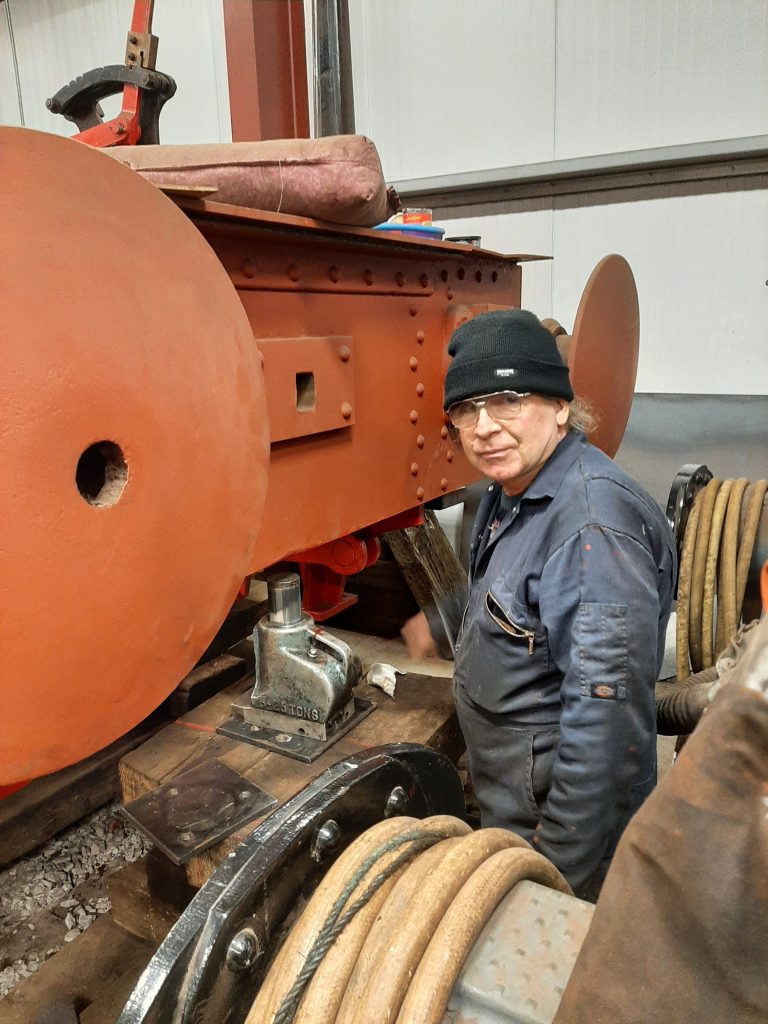 Ade has managed to spend some more time on Caliban when not shunting Christmas coaches for the RSR. He is seen here lowering Caliban‘s frames closer towards the axleboxes. 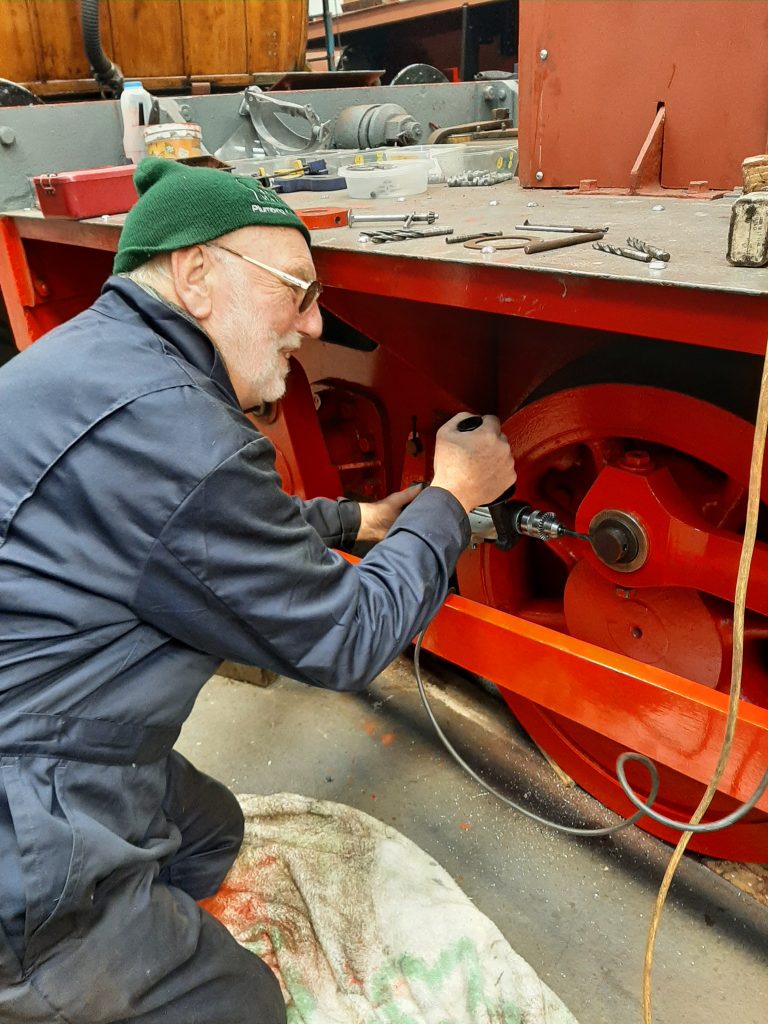 Phil Bell and John Davis have still been finding work to do on Fluff with Phil reaming out a hole for one of the taper pins that holds the right hand coupling rod in position. 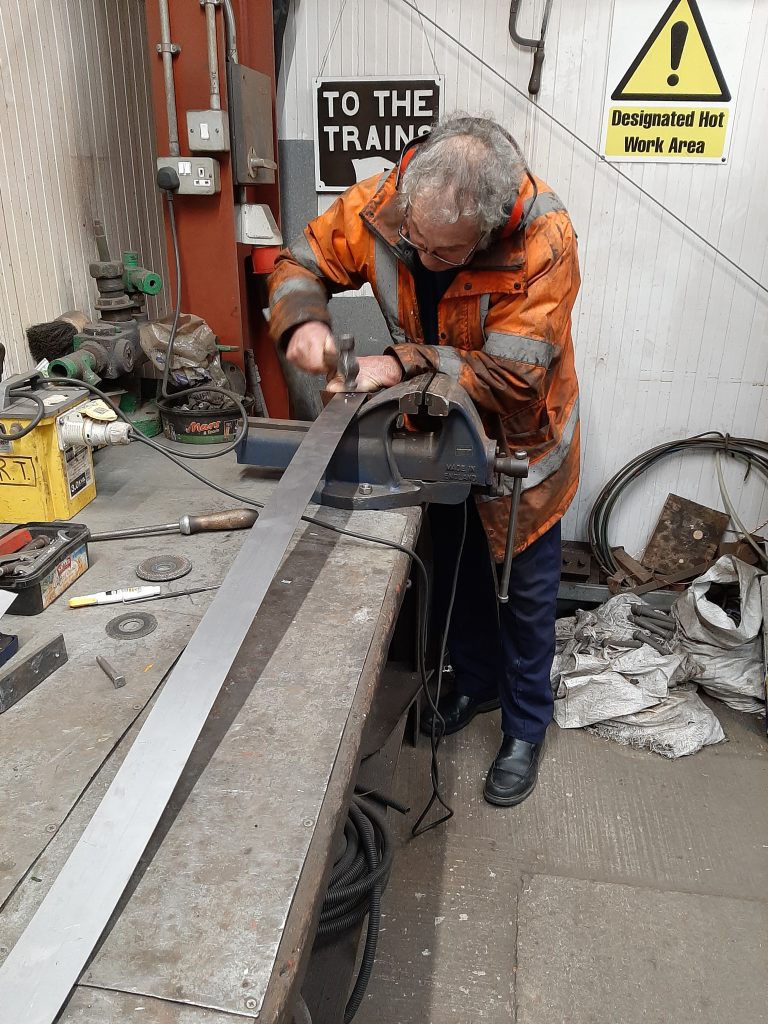 Keith is still working on the boiler cladding for Wootton Hall and has been riveting the end cleats to the boiler bands. 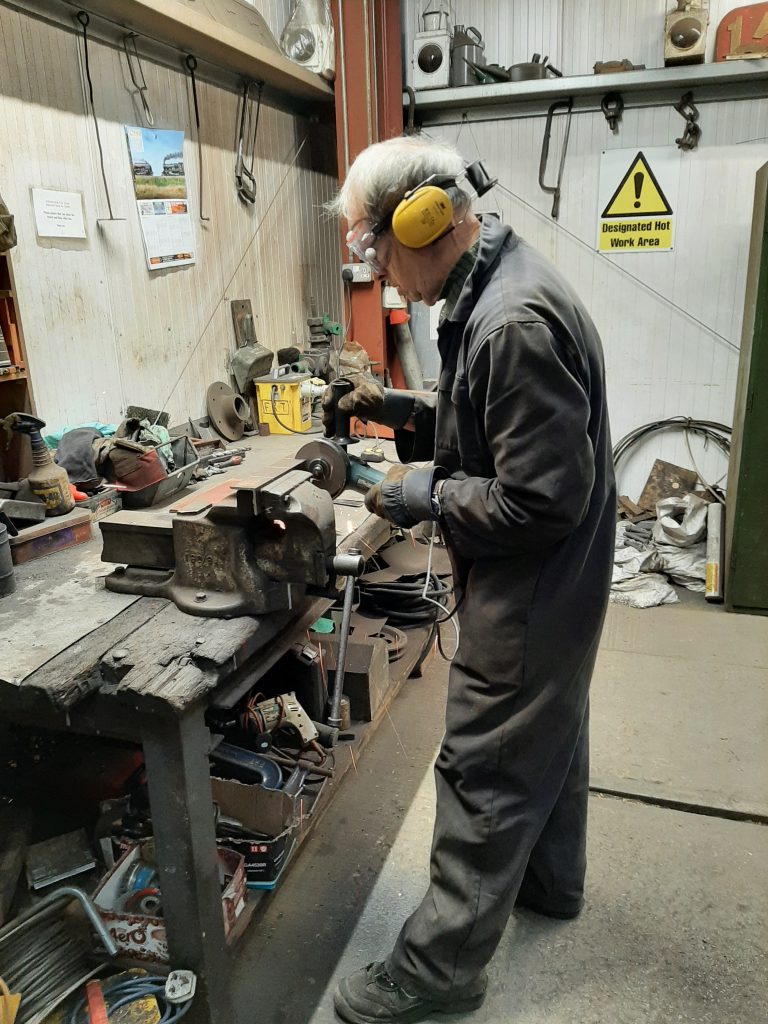 The new cage for the gas bottles has not been forgotten and John Dixon has been progressing with this project when not working on GER No. 5’s roof. 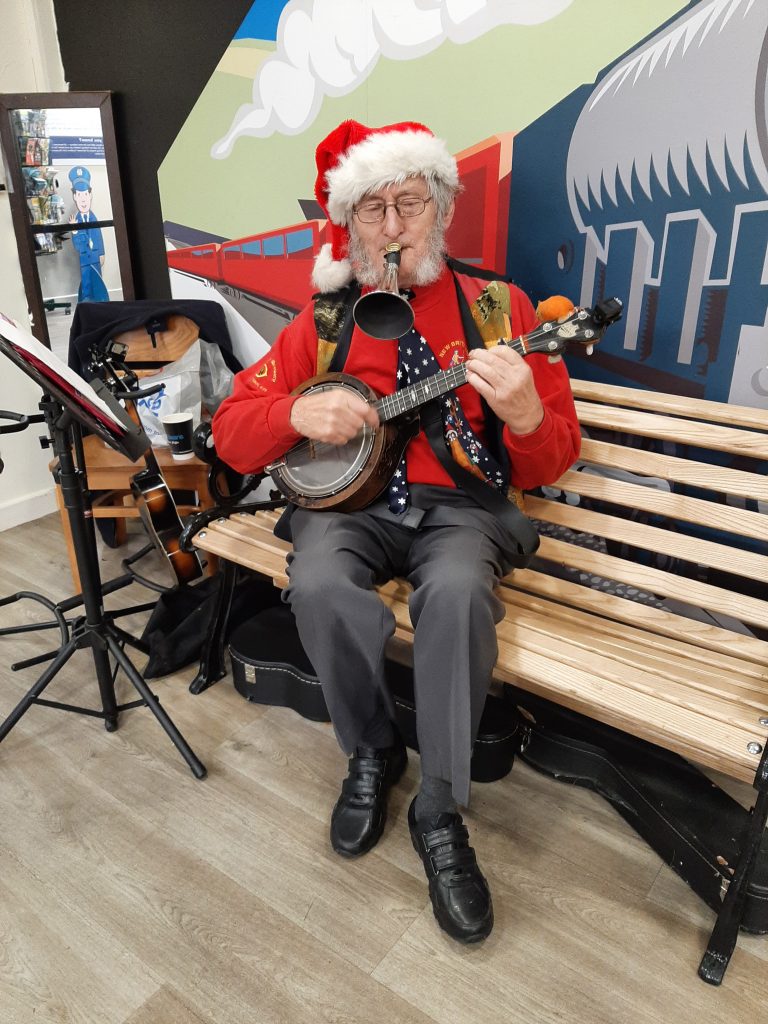 Finally, whether we like it or not, the festive period has most definitely arrived with Keith and Ade driving the RSR’s Santa trains over the weekend. Given the current Covid situation, it was agreed that Alan and Tim would this year play Christmas songs and carols at the entrance to the museum rather than on the trains. Alan is seen here using a kazoo to add to the sound, with err a mixed reception!?!