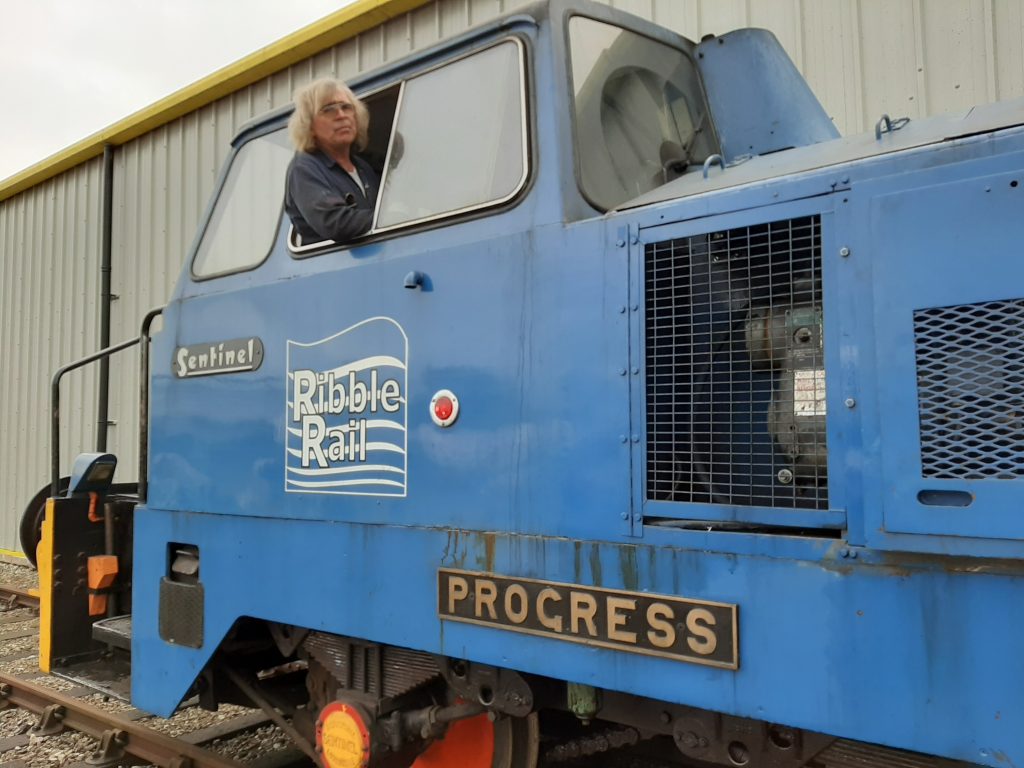 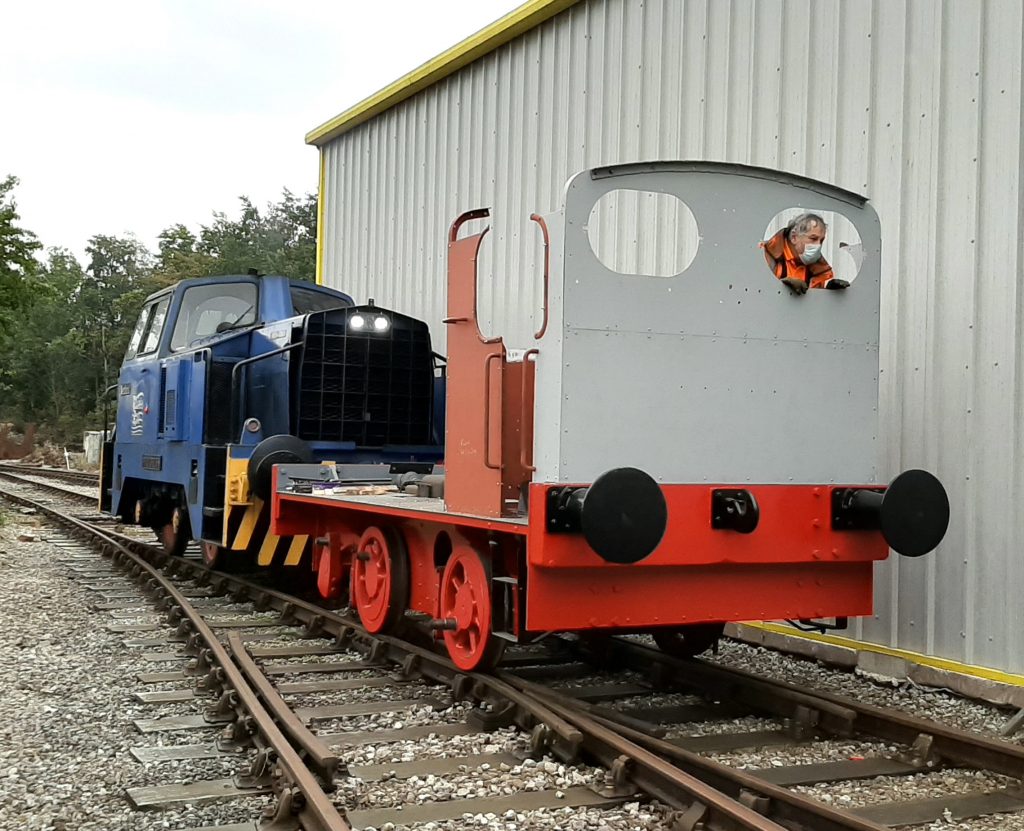 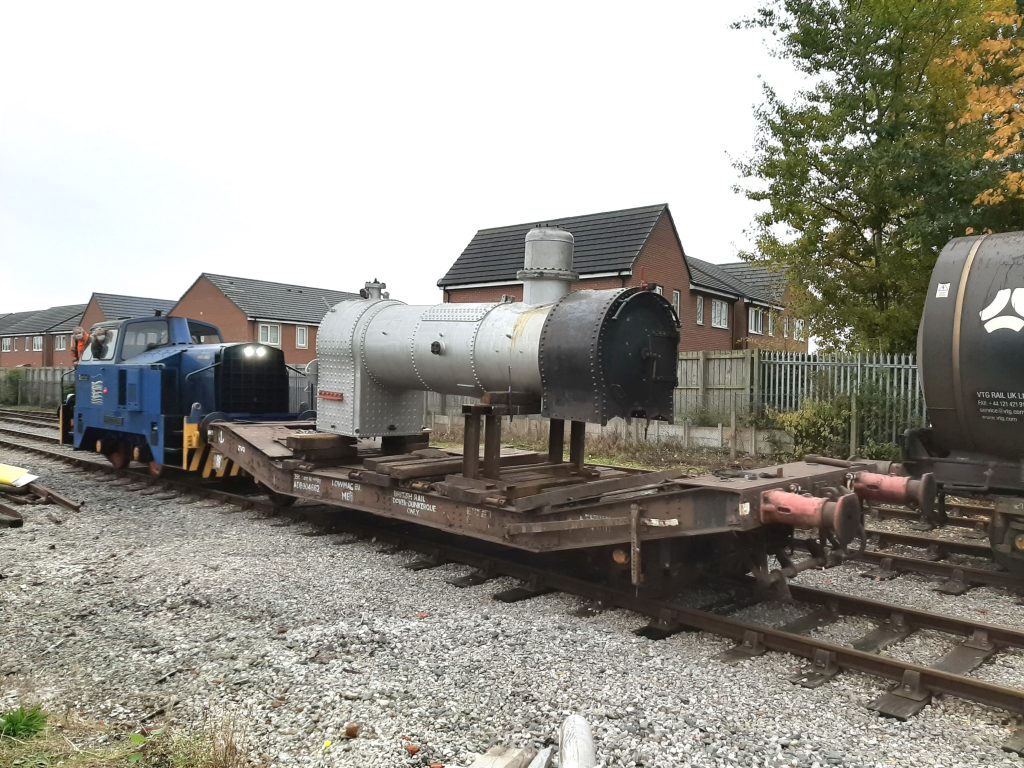 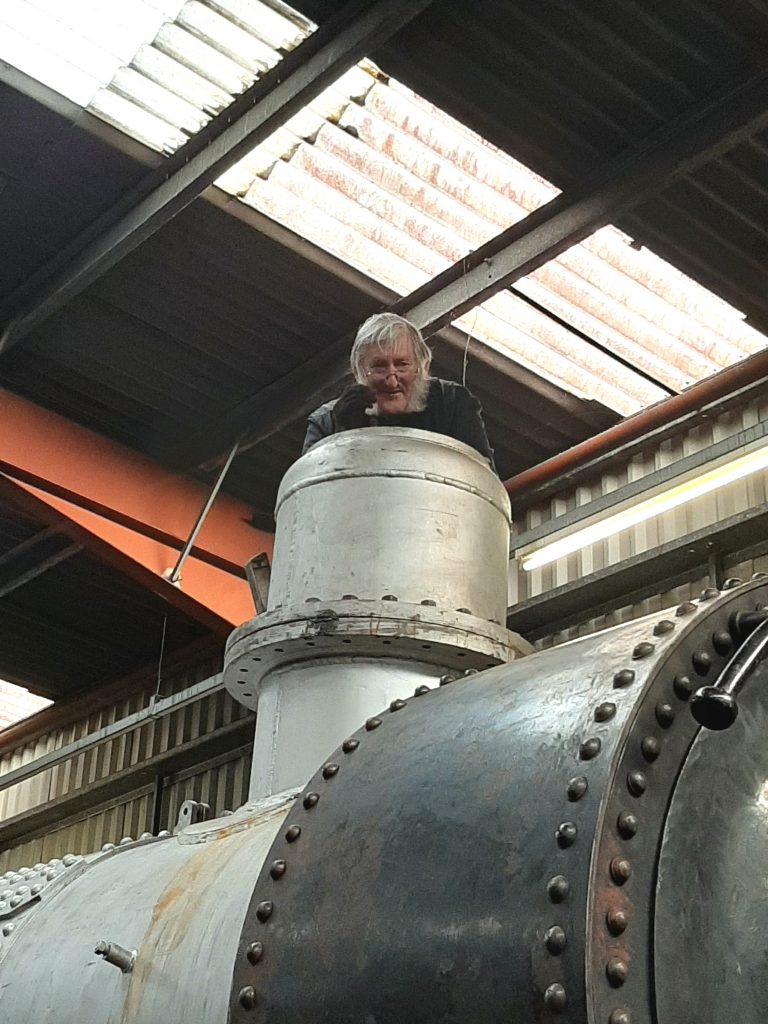 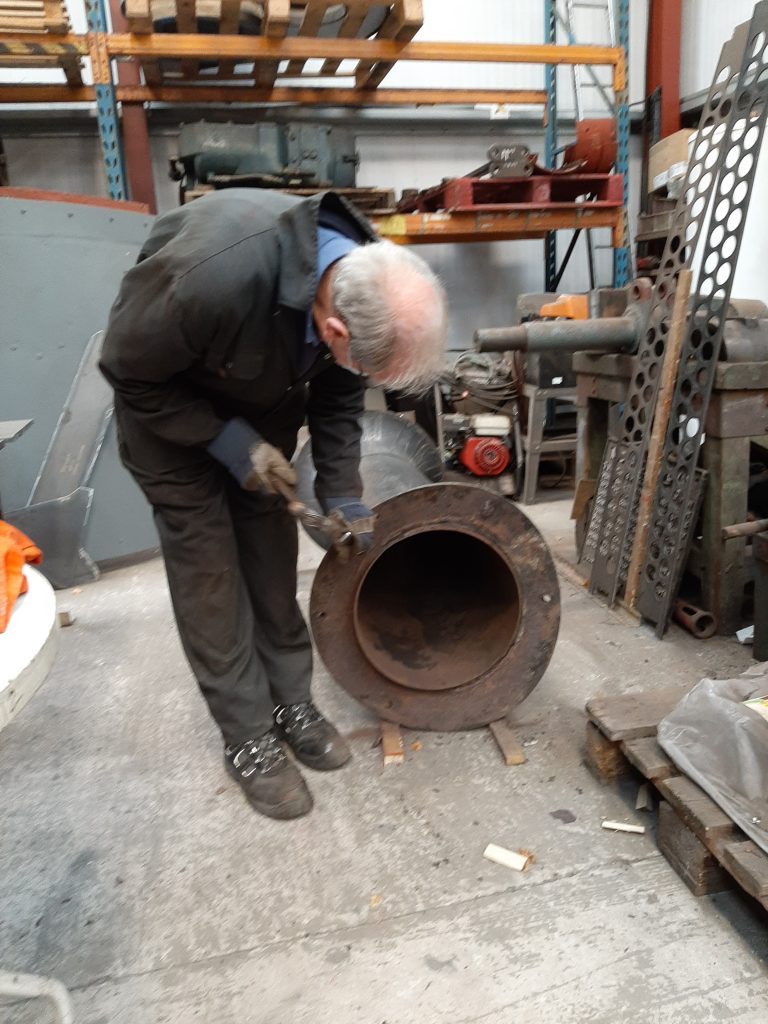 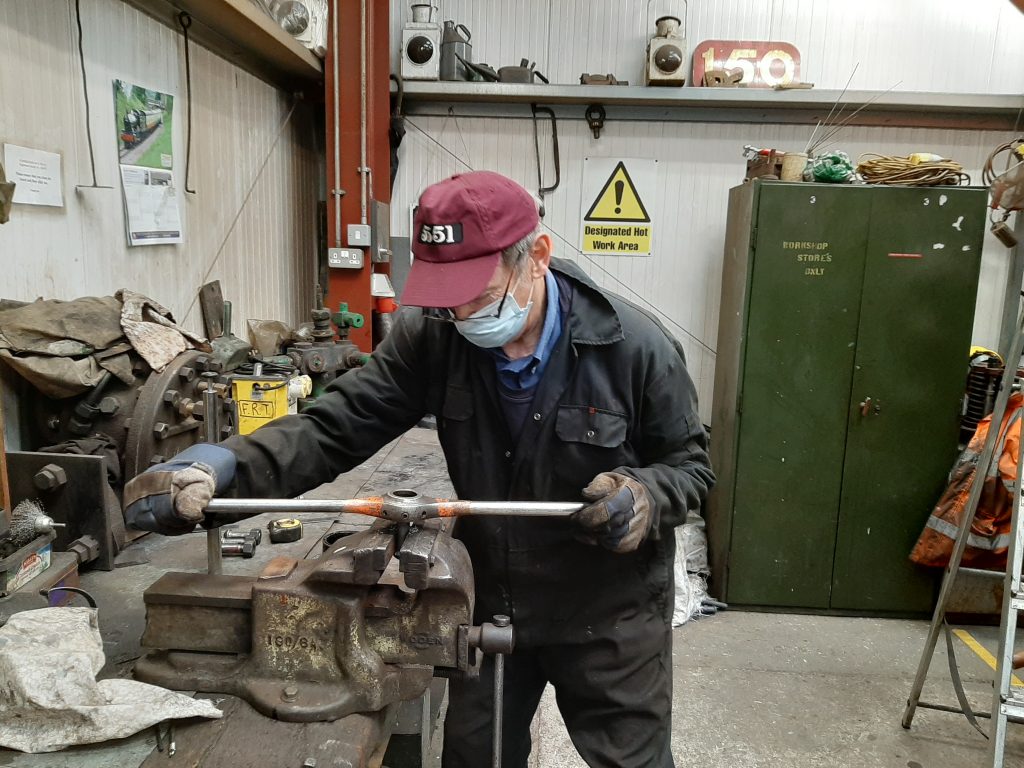 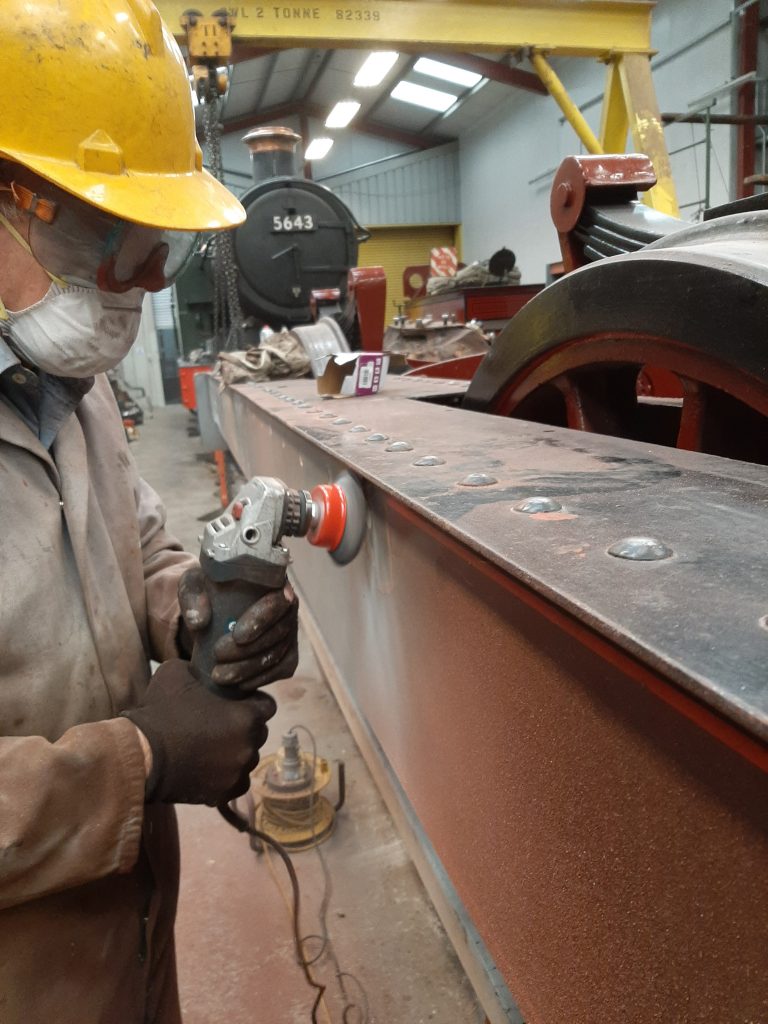 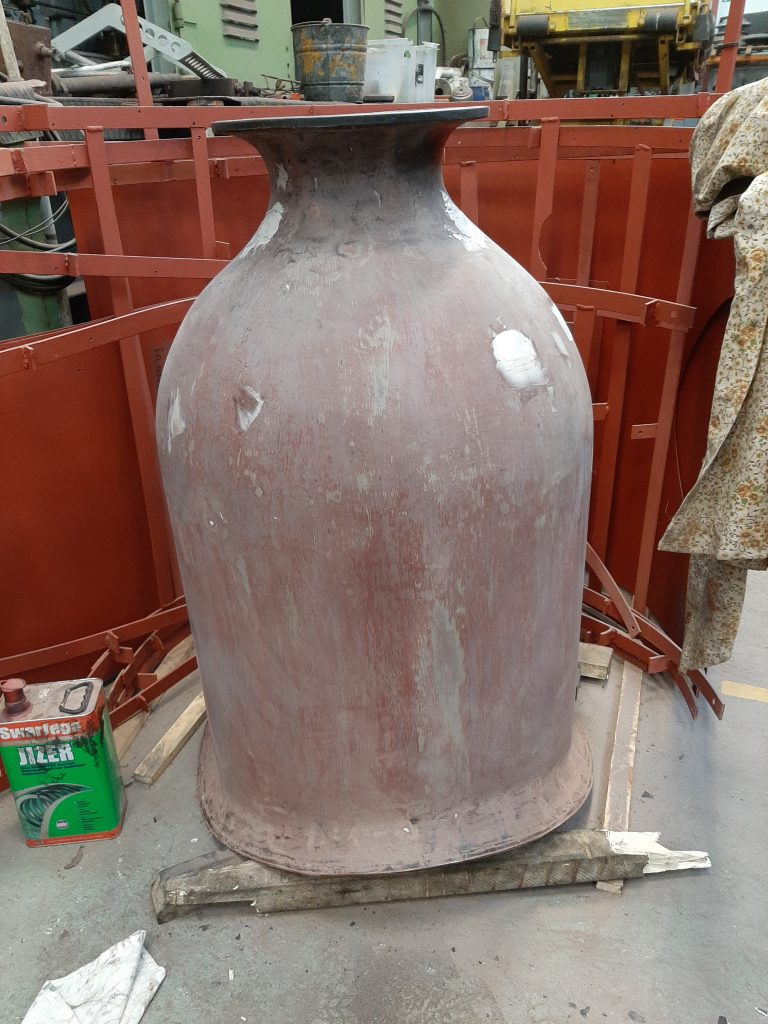 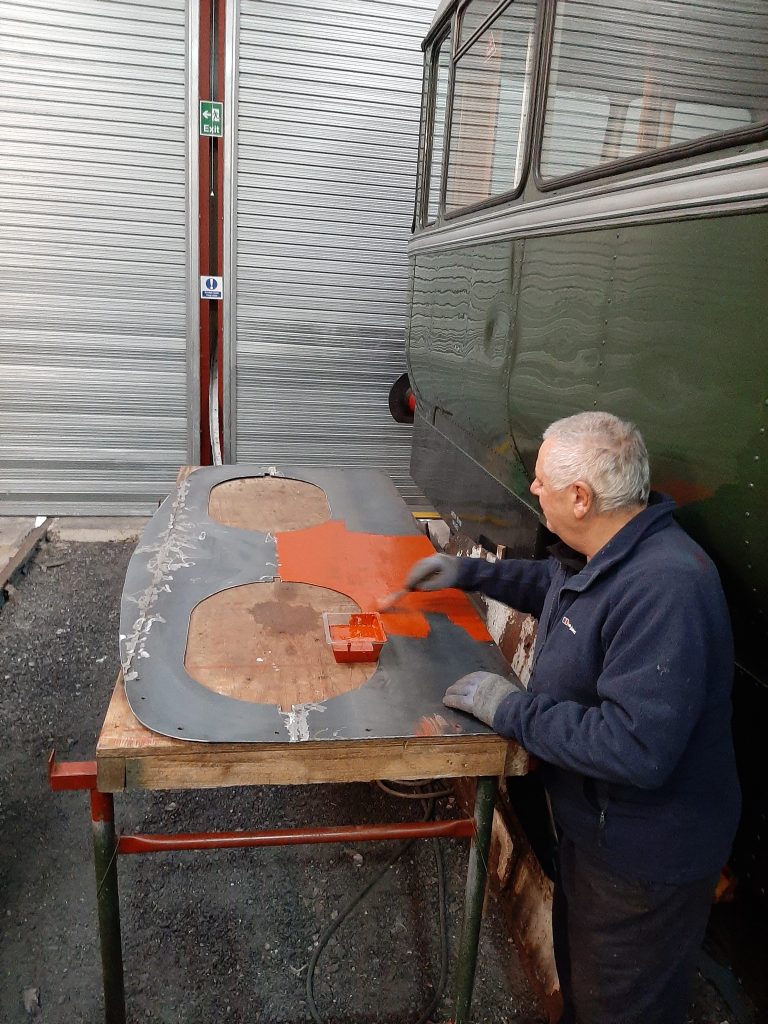 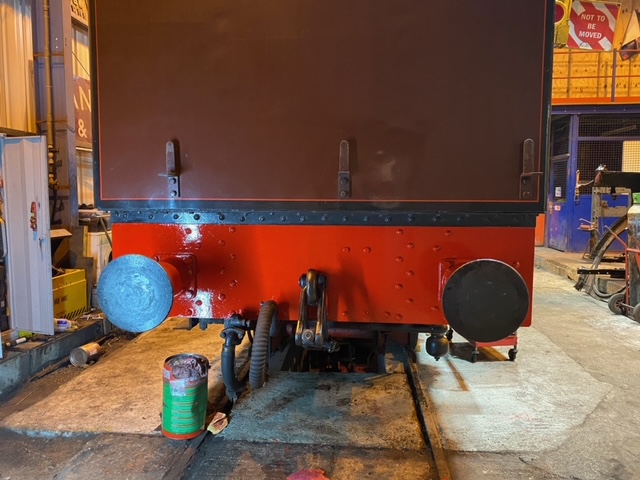 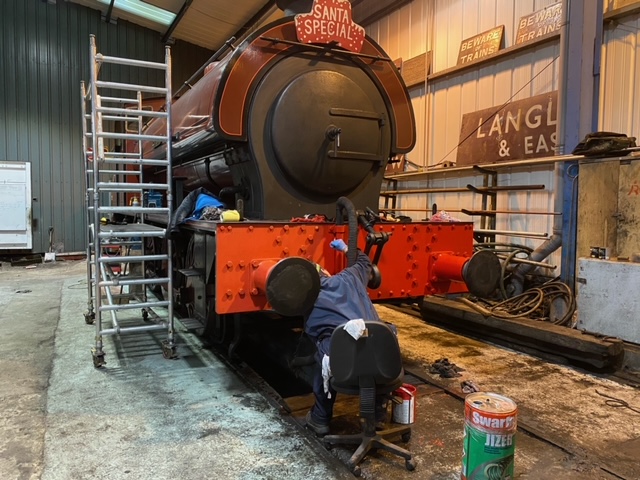 The welcome news that FR 20 had passed its hydraulic test has turned thoughts as to the practicalities of conducting a steam test out of the frames. It is hoped that the boiler will be shunted around to the RSR running shed sometime this week in exchange for a brake van. 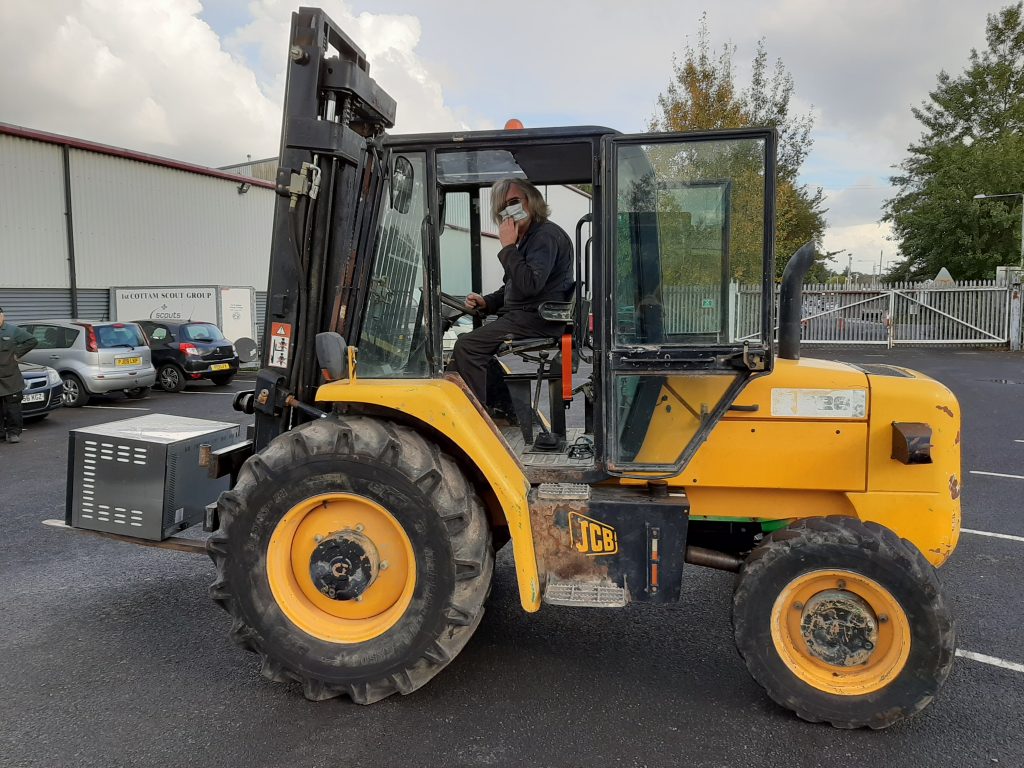 This is all subject to the availability of Ade who is assisting Ribble Rail this week. Ade is pictured here trying his hand last week with the RSR’s recently acquired four wheel drive fork truck. 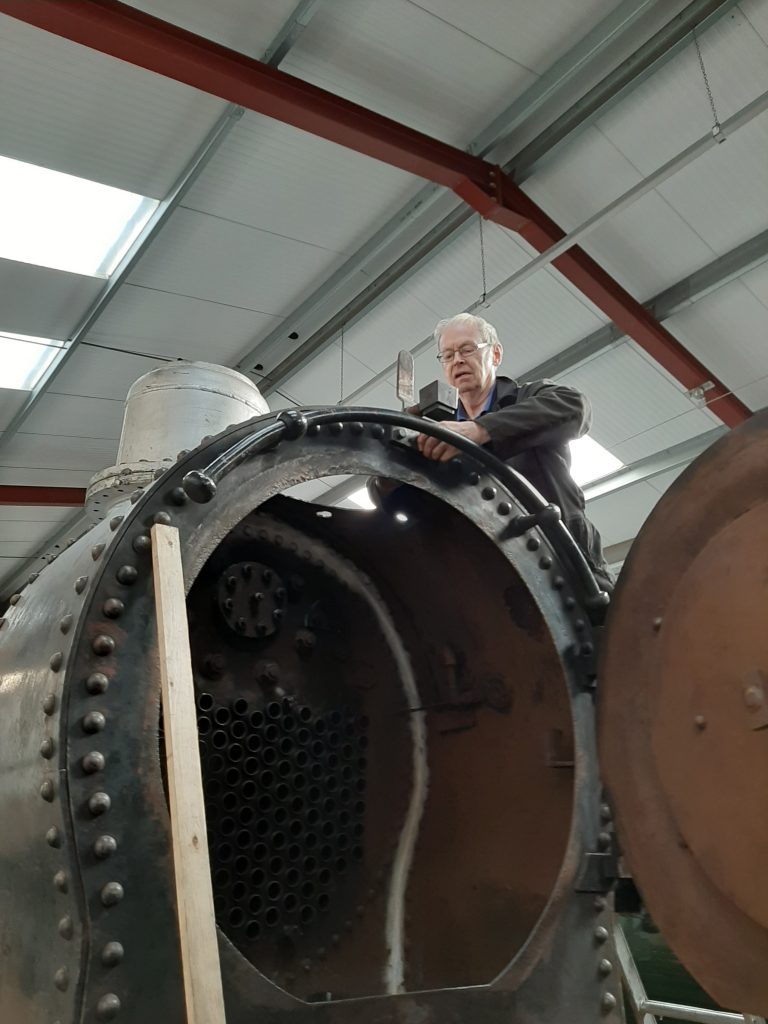 Work has continued on some of the smaller jobs on FR 20. Tim has finished painting the modified spring hangers and has also done some careful refurbishment and priming of the tender buffer beam so as to retain appropriate signs of age and work use.  John Dixon has straightened up the smokebox lamp bracket. 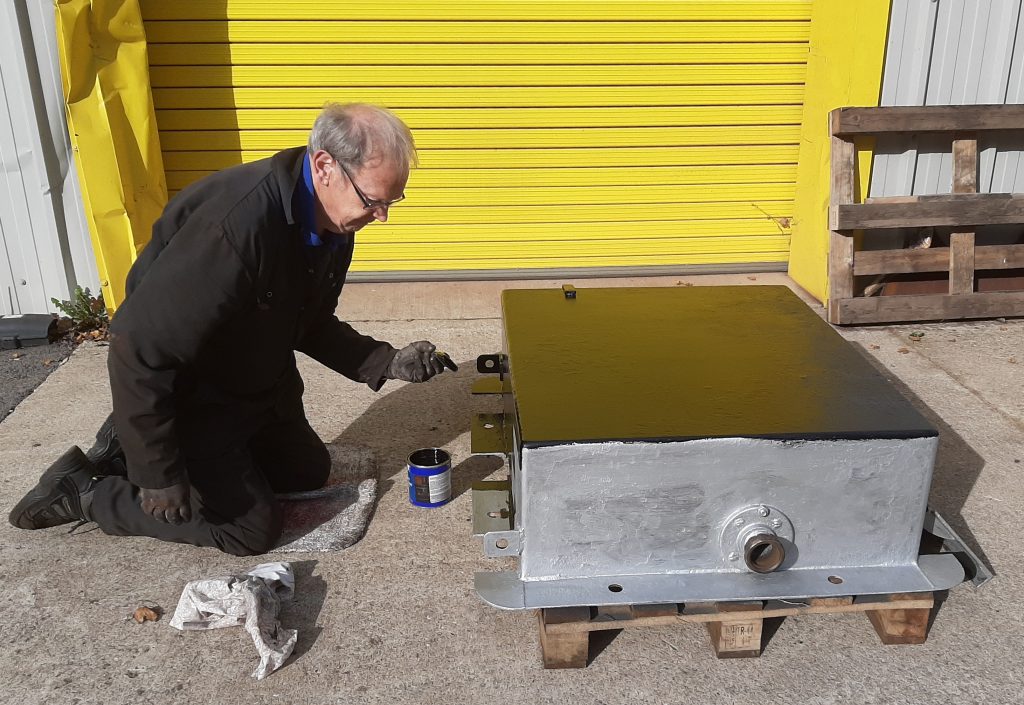 John then set about giving the bottom of the ashpan a much-needed clean and paint. 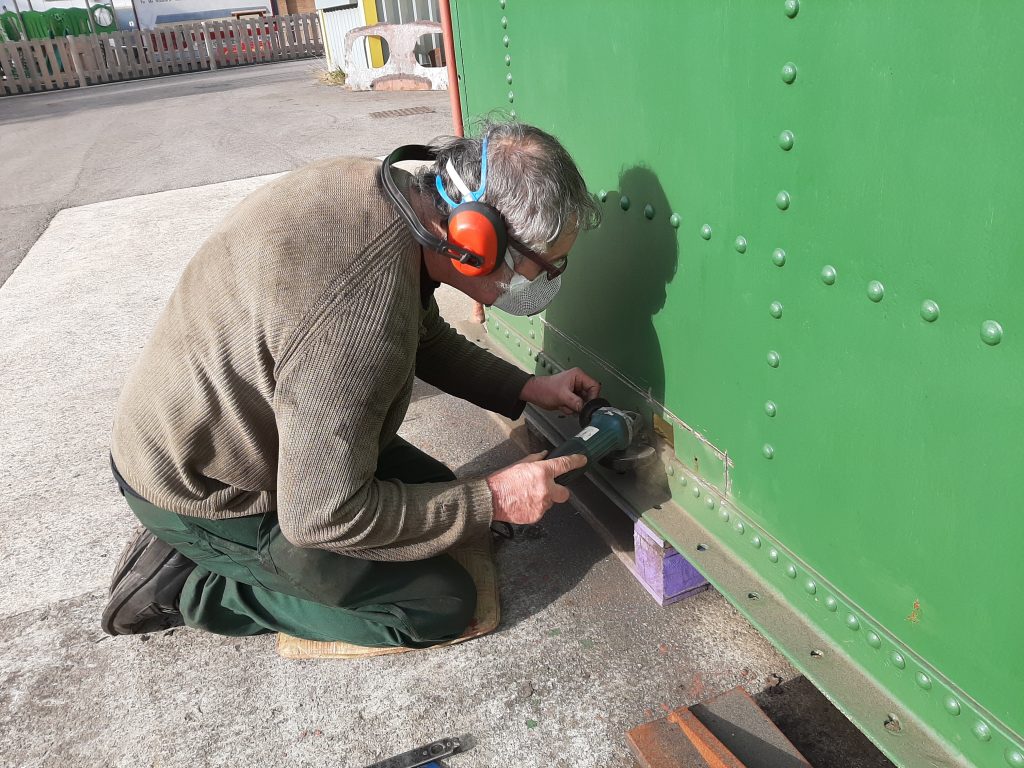 Keith has taken advantage of some better weather to cut some more metal from Wootton Hall‘s tender tank. 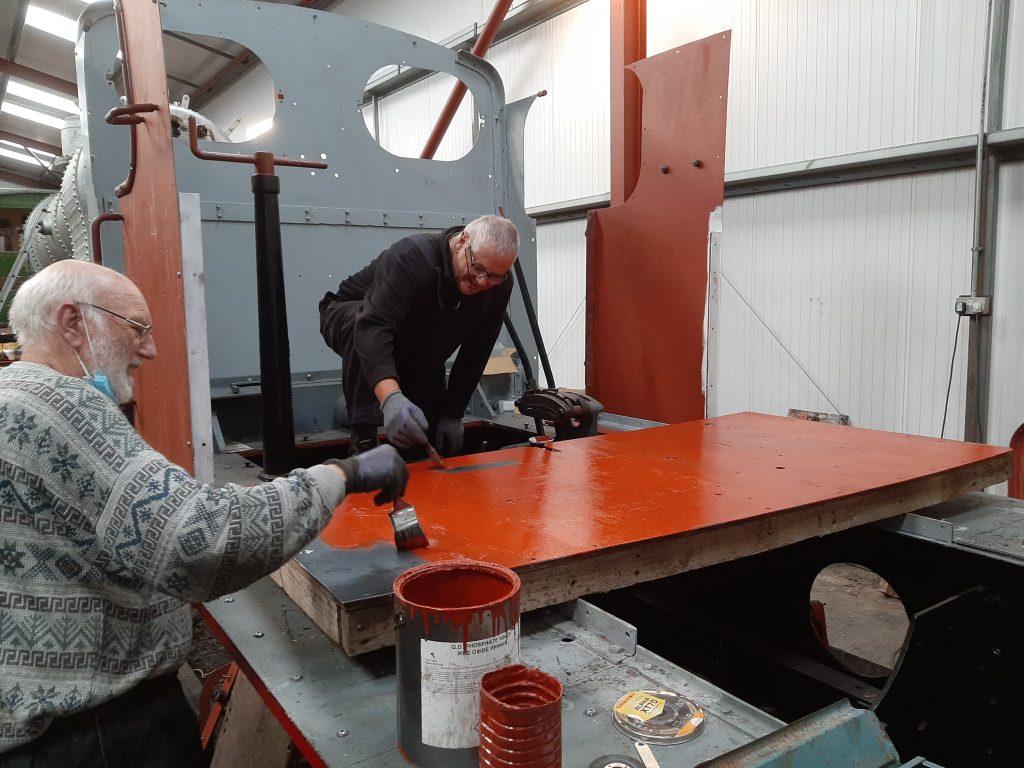 Paul Balshaw has continued buffing up 5643’s rods whilst Phil and John Davis have been busy painting new steelwork for Fluff. 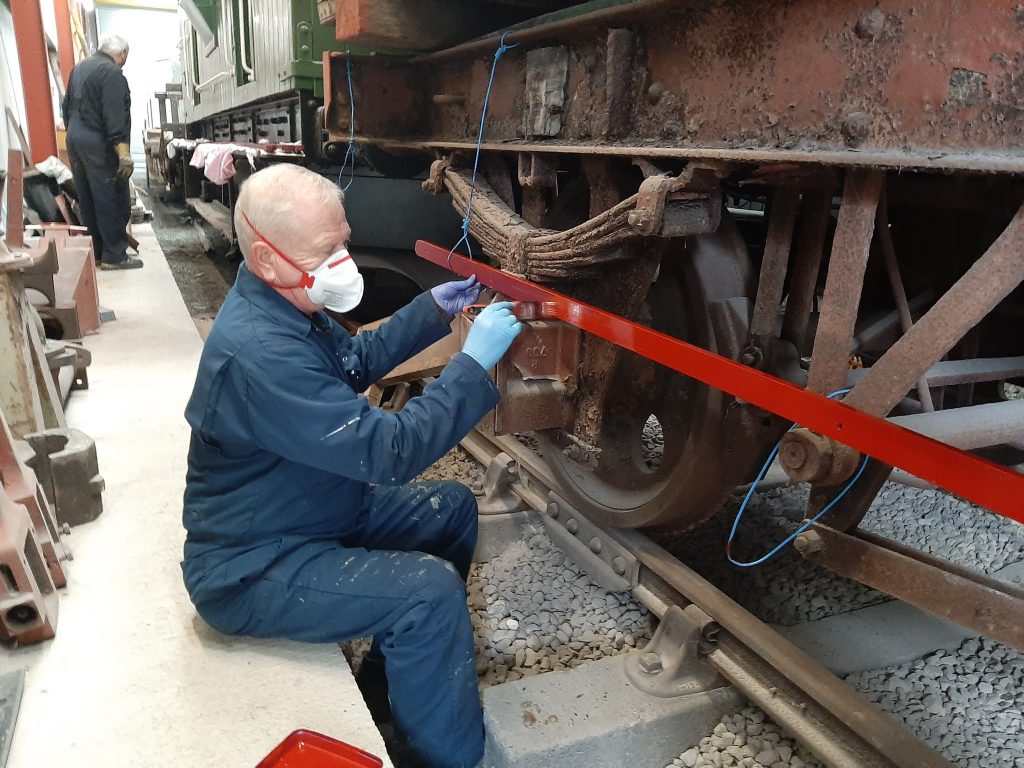 Finally, Paul Newton has at last managed to put some gloss paint on the slats for the formerly derelict platform seat. 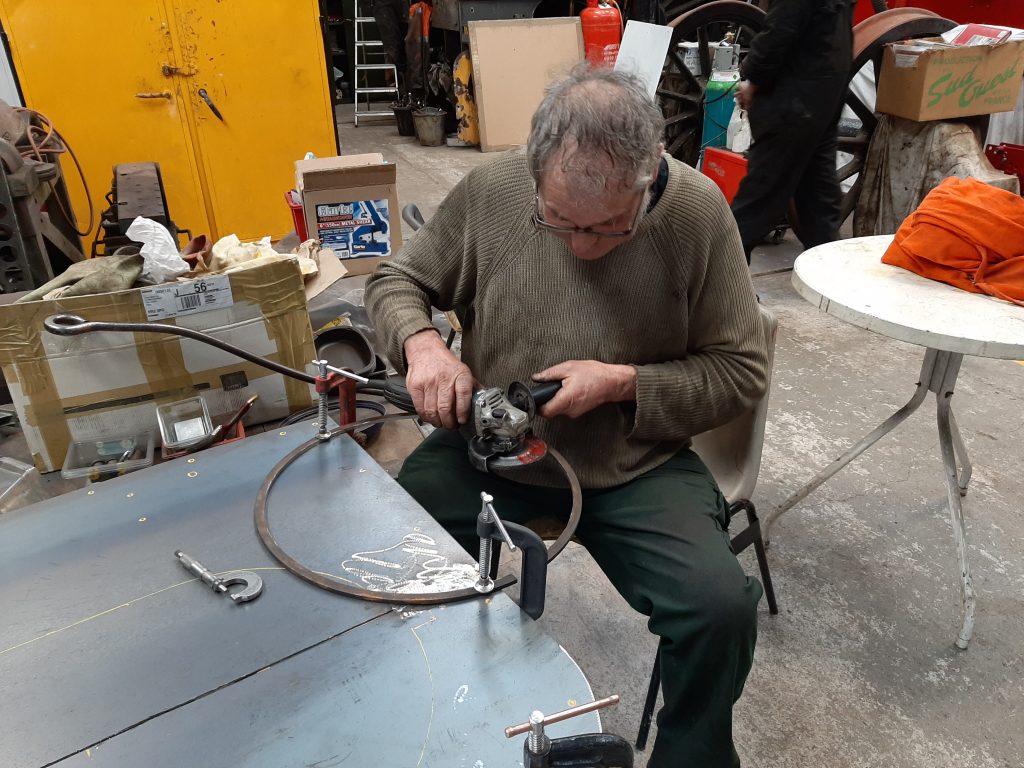 The cleaning work inside and outside the frames of 5643 has been completed which has allowed work to focus on the valves and pistons. Both pistons have now been split from their respective crossheads and examined by Keith who determined that new piston rings were required. Keith is seen here dressing off one of the rings prior to fitting. 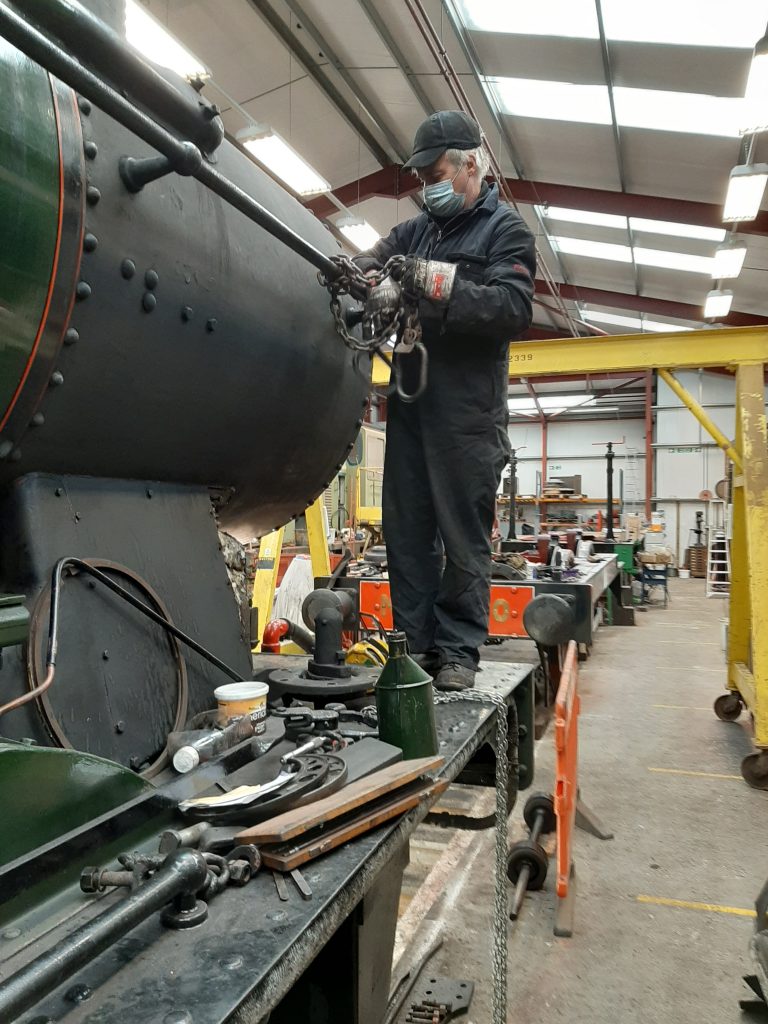 The heavy work involved in releasing and re-installing the pistons required additional assistance which was provided by George, who came up from Derby on two occasions over the past couple of weeks, however, both pistons are now back in place and connected to the crossheads. 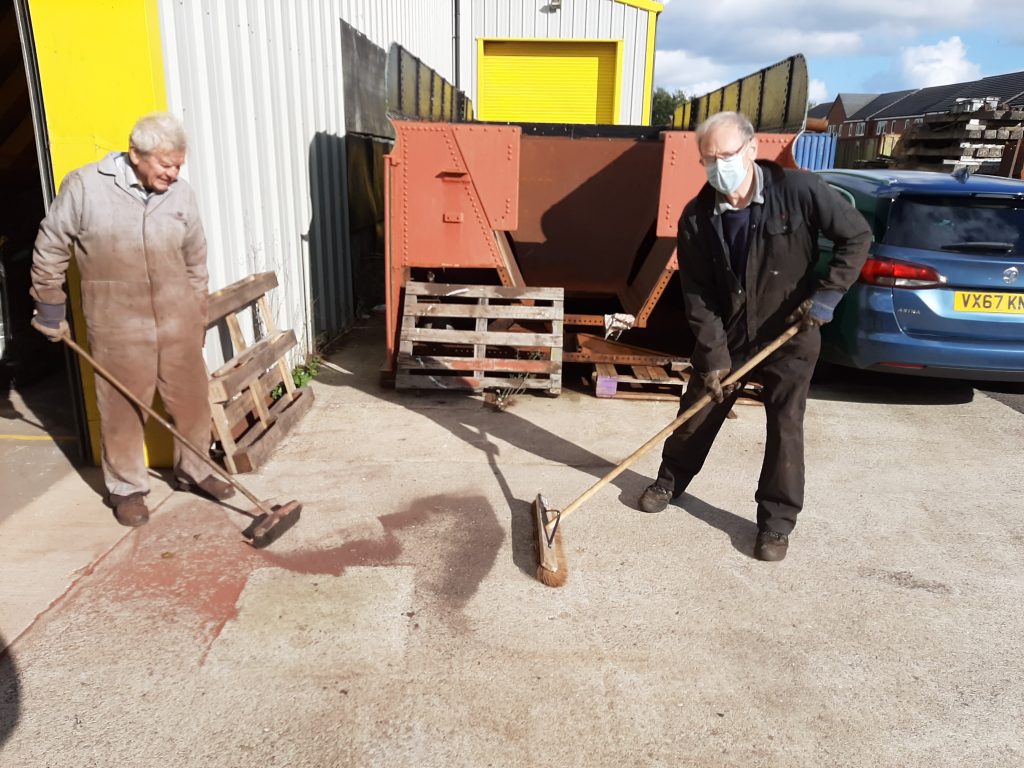 Work on cleaning up and repainting the cab floor steelwork continues which is Fred’s forte. Fred and John Dixon are seen cleaning up outside the shed on Friday after Fred’s latest work which saw off yet another cup wire brush. 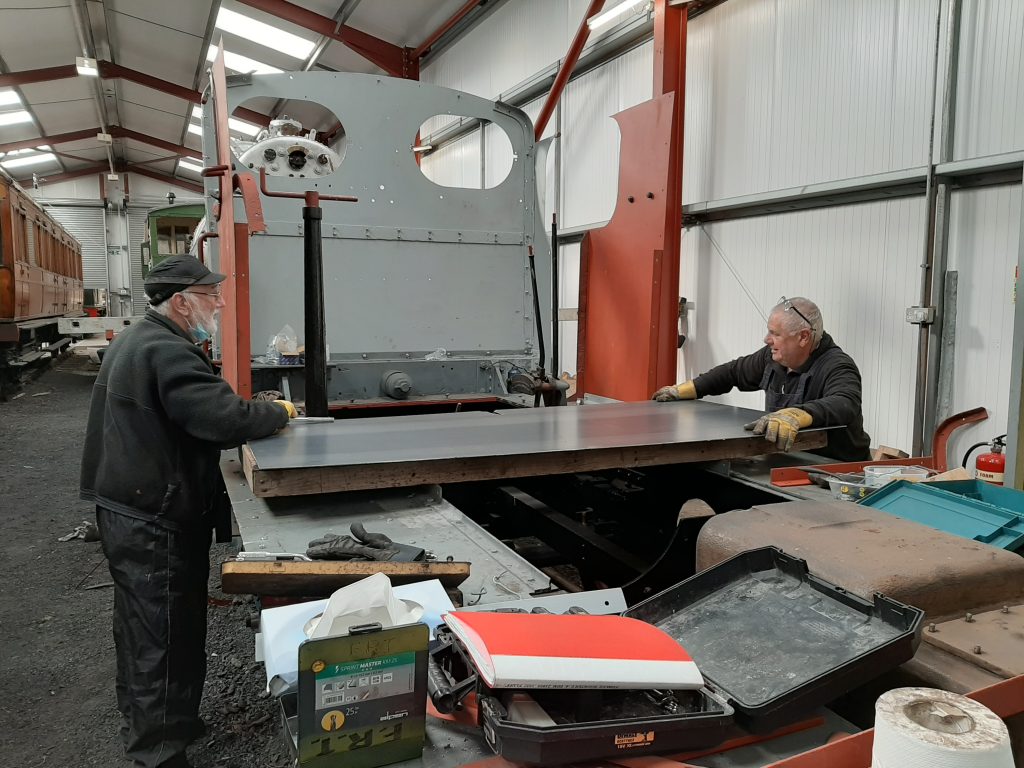 The end of the main thrust of cleaning on 5643 has enabled Phil, John Davis and Paul to return to the overhaul of Fluff. Phil and John are seen here with yet another new sheet of steel. 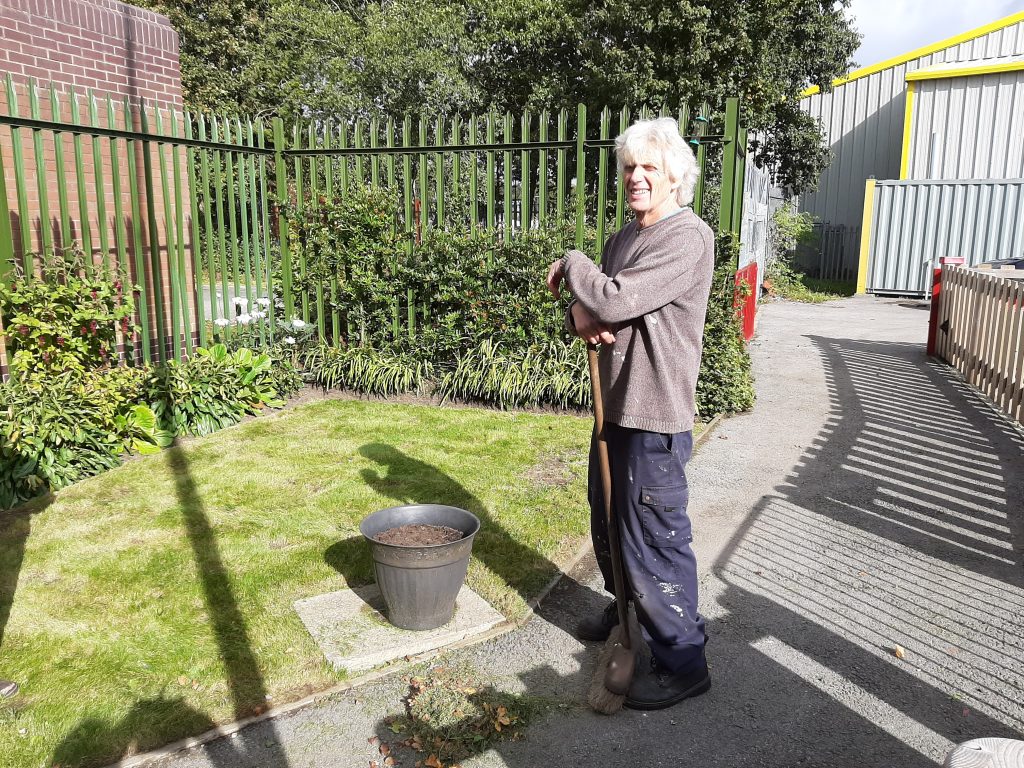 We were pleased to see the return of Ed after a short spell in works. He spent a very busy day tidying up the garden area and cutting back undergrowth that was coming through the adjacent fence.

The remainder of the volunteer workforce has generally been engaged on progressing the overhaul of FR 20. We are very pleased to be able to inform you that the boiler passed its hydraulic test today, so well done to all concerned. However, the current procedures now require that the boiler is steam tested out of the frames so that will be the next milestone to achieve. 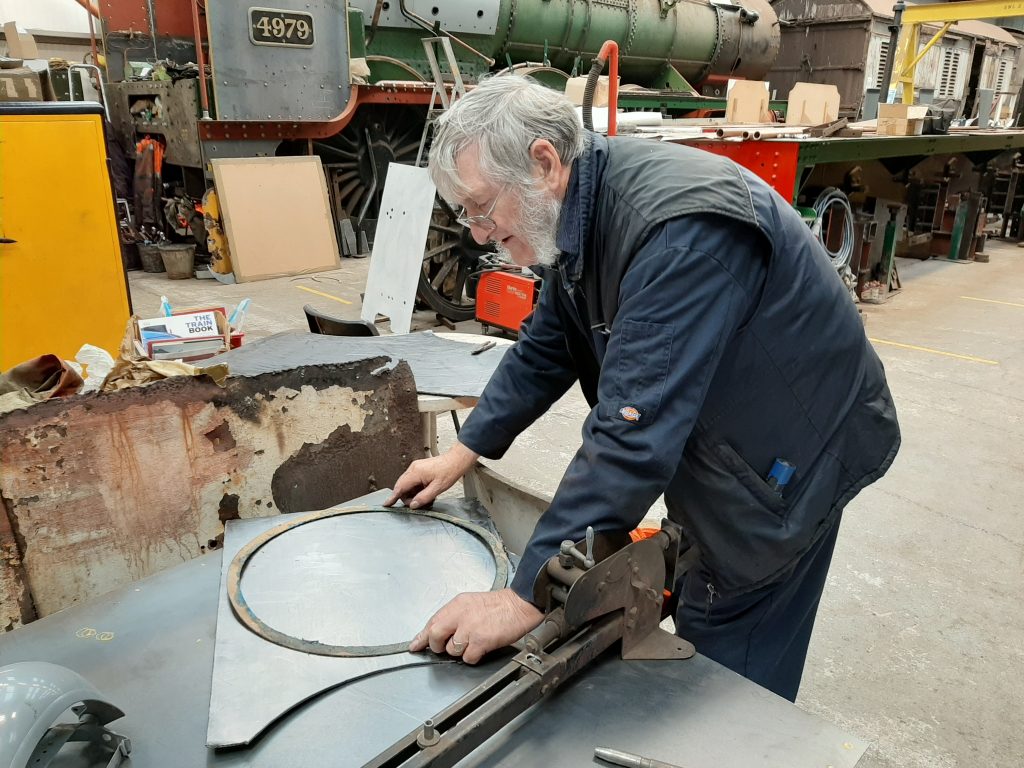 Meanwhile, Alan has cut two new joint rings for the cylinder covers which have been carefully fitted. 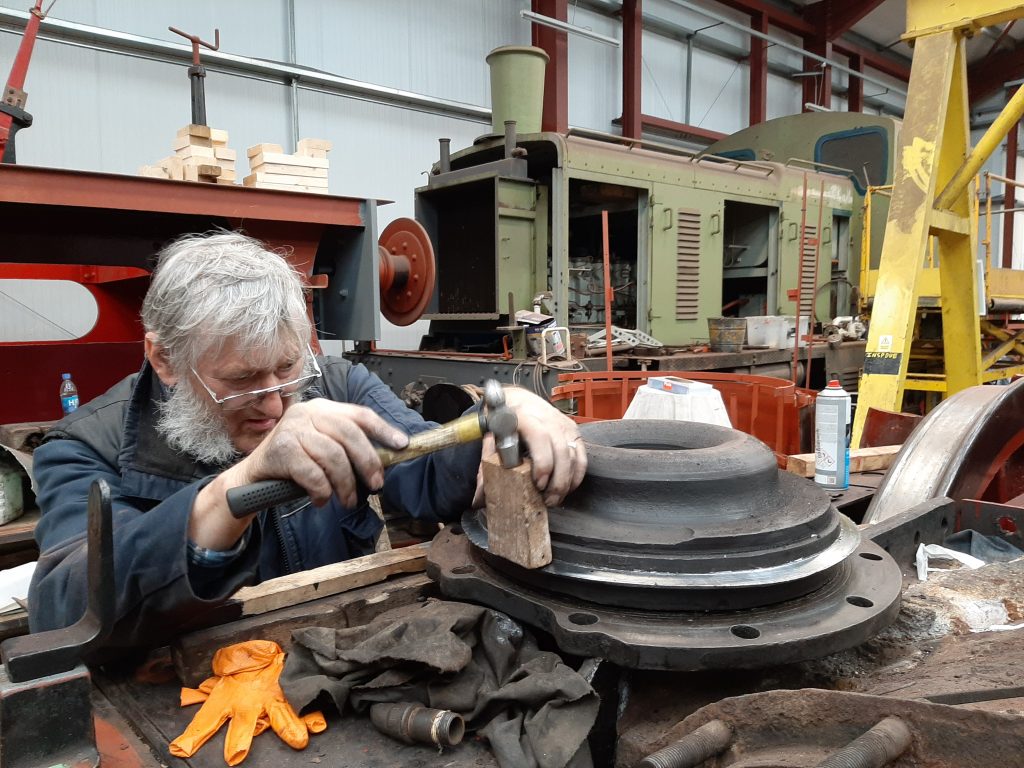 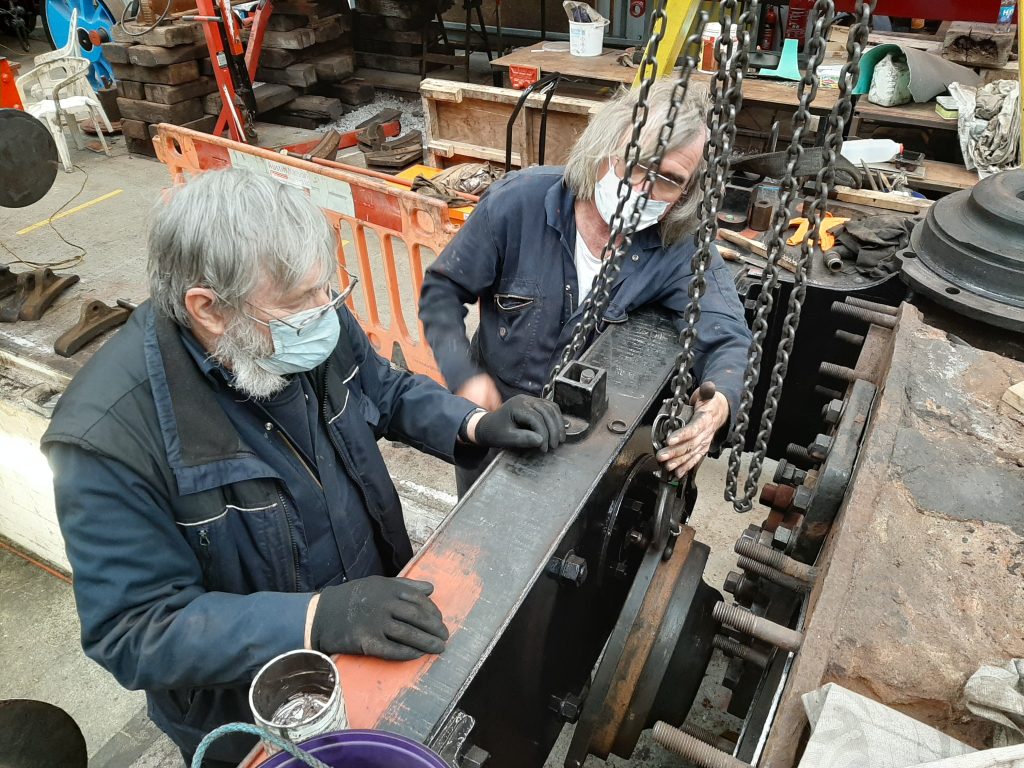 Alan and Ade then spent most of last Wednesday struggling to fit the left hand cylinder cover, finally succeeding after discovering that one of the studs hadn’t been properly screwed in and was not square with the rest. 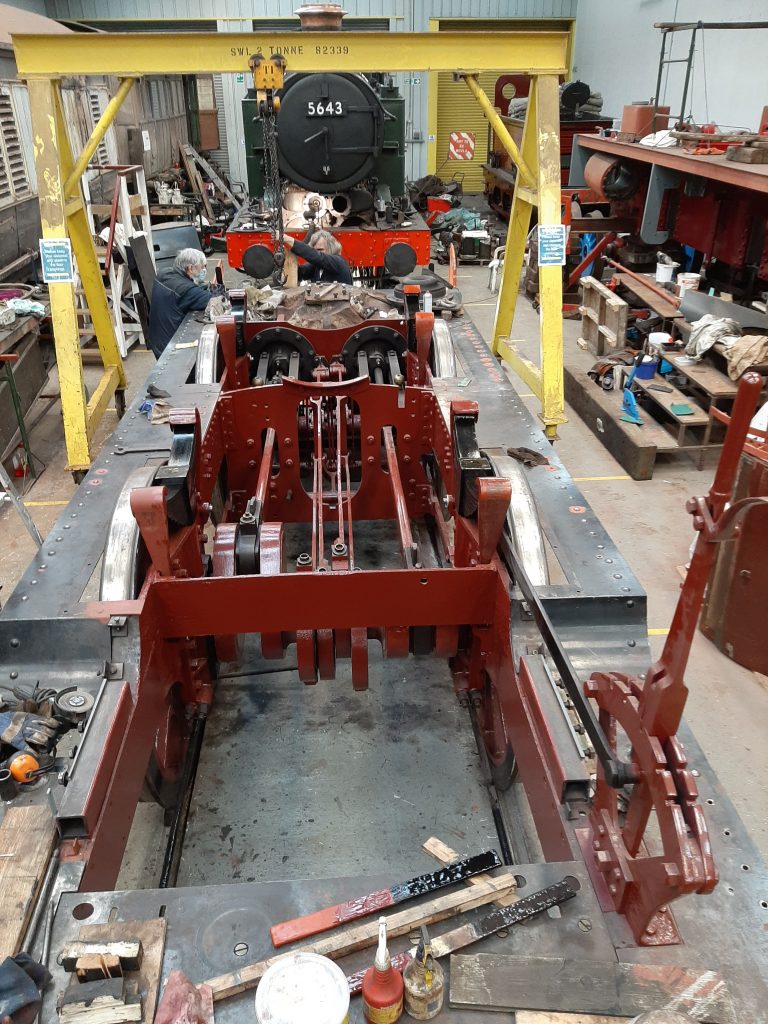 We are pleased to report that, after much fine tuning, the new springs are now in place. 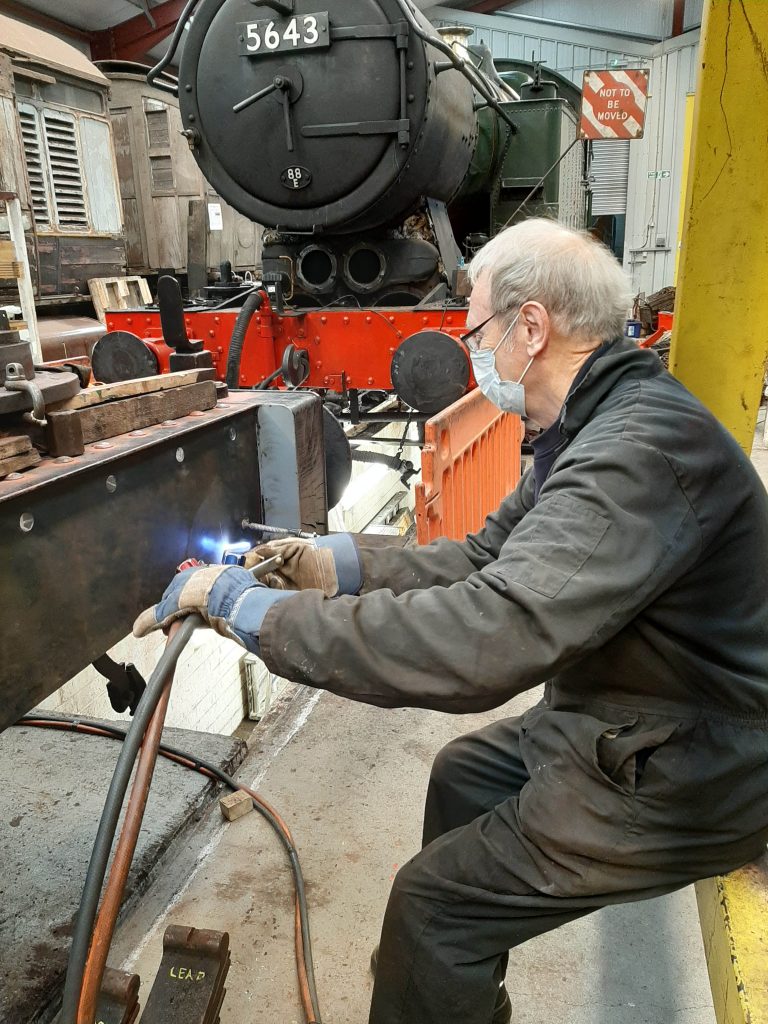 The annoying slight bulge towards the front of the right hand valance has been removed with the aid of some carefully applied heat and the use of a clamp to straighten the metal. 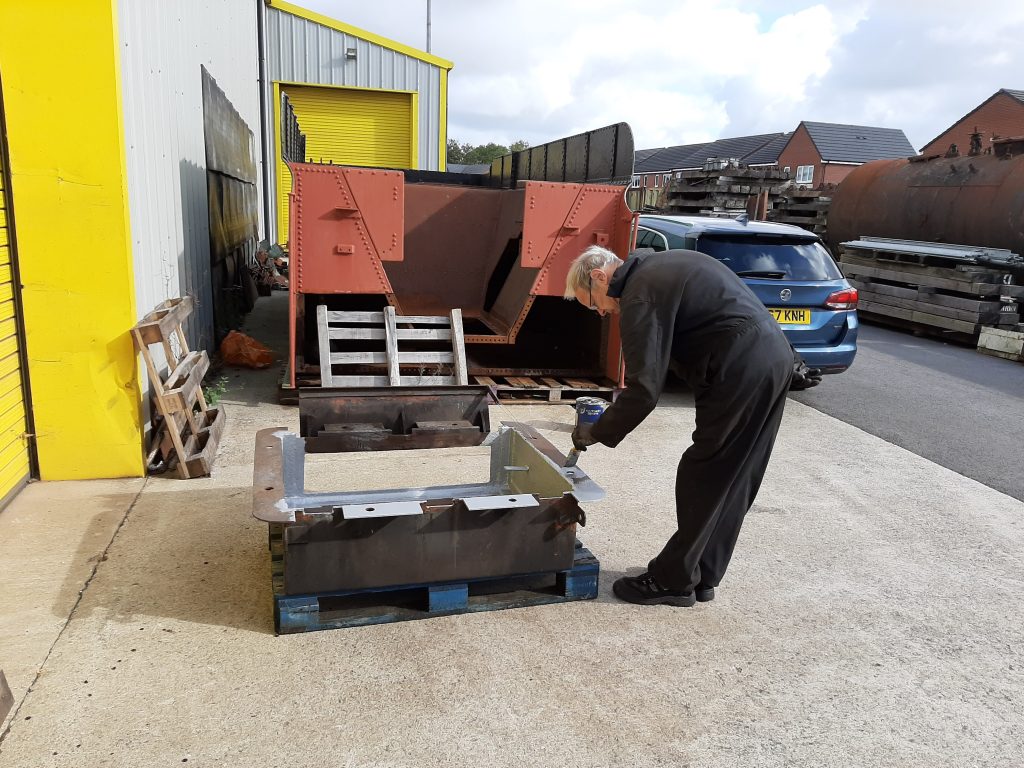 Finally, the ashpan has been cleaned, painted and the ejector ring repaired and re-fitted by John Dixon. 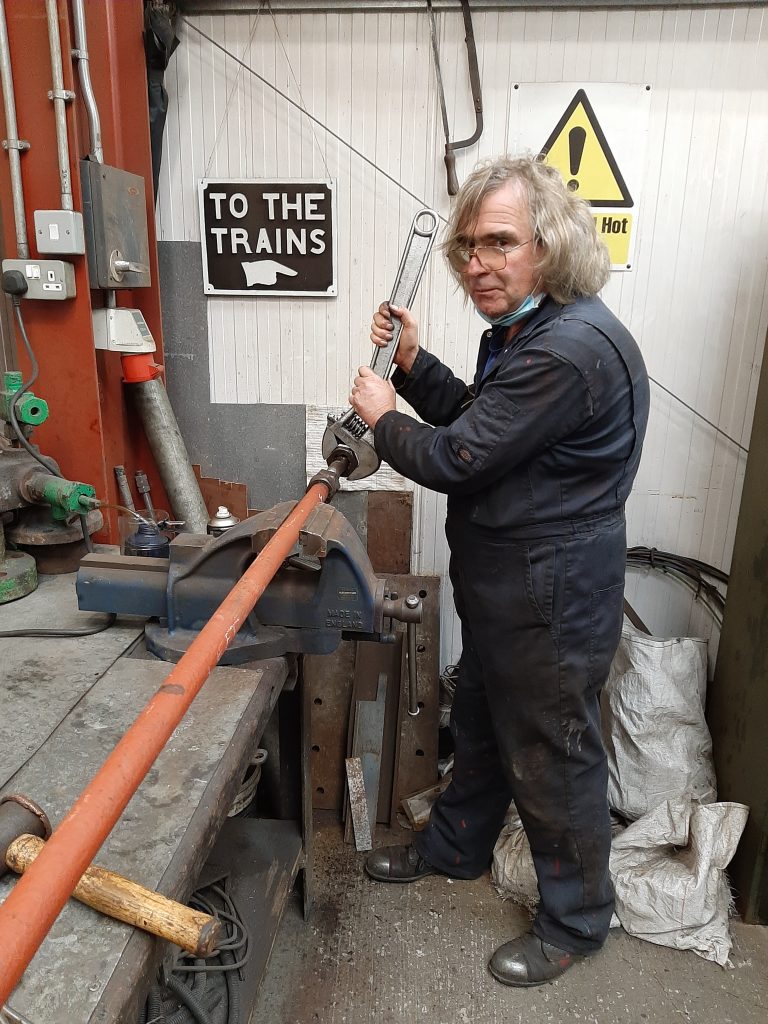 Finally, Ade has also spent some time freeing off and adjusting the nuts on Caliban‘s brake rods. Incidentally, contrary to what you might think from the photo, we can confirm that Ade has now had his post lockdown haircut!