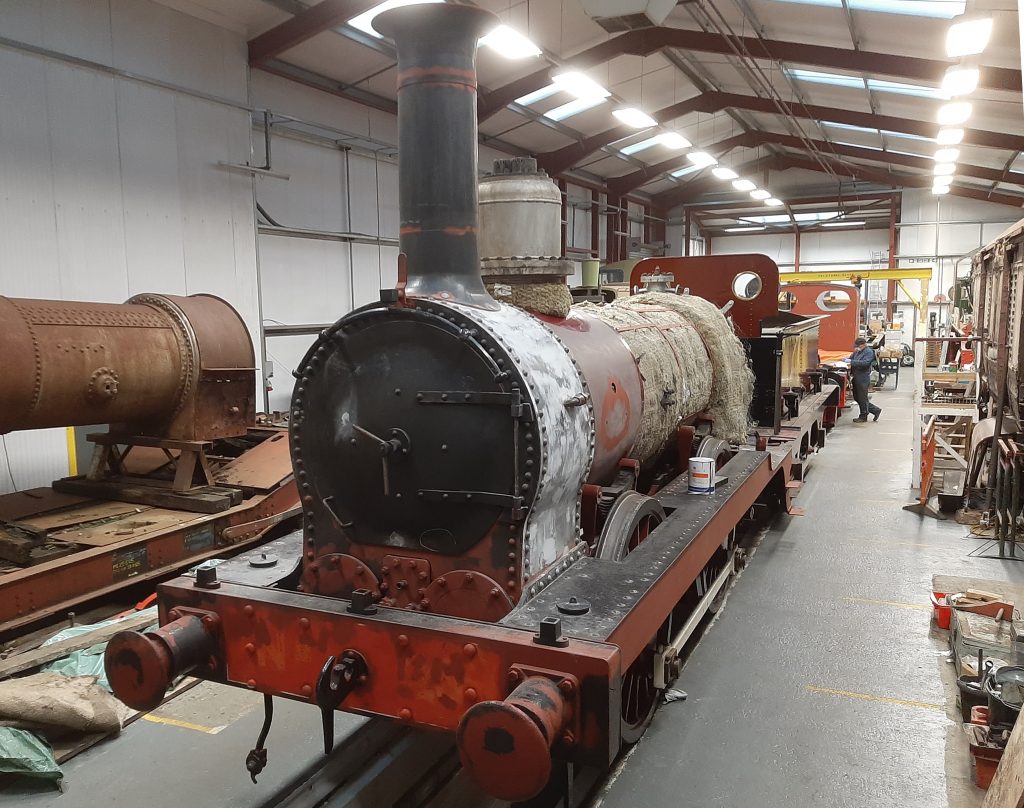 It has been all change again in the FRT shed this week with a big shunt around the site on Thursday which has enabled FR20’s engine to be reunited with its tender over the pit and for Fluff (and its associated workforce) to be moved into the warmth of the main shed. They have also been joined again by Caliban‘s boiler. 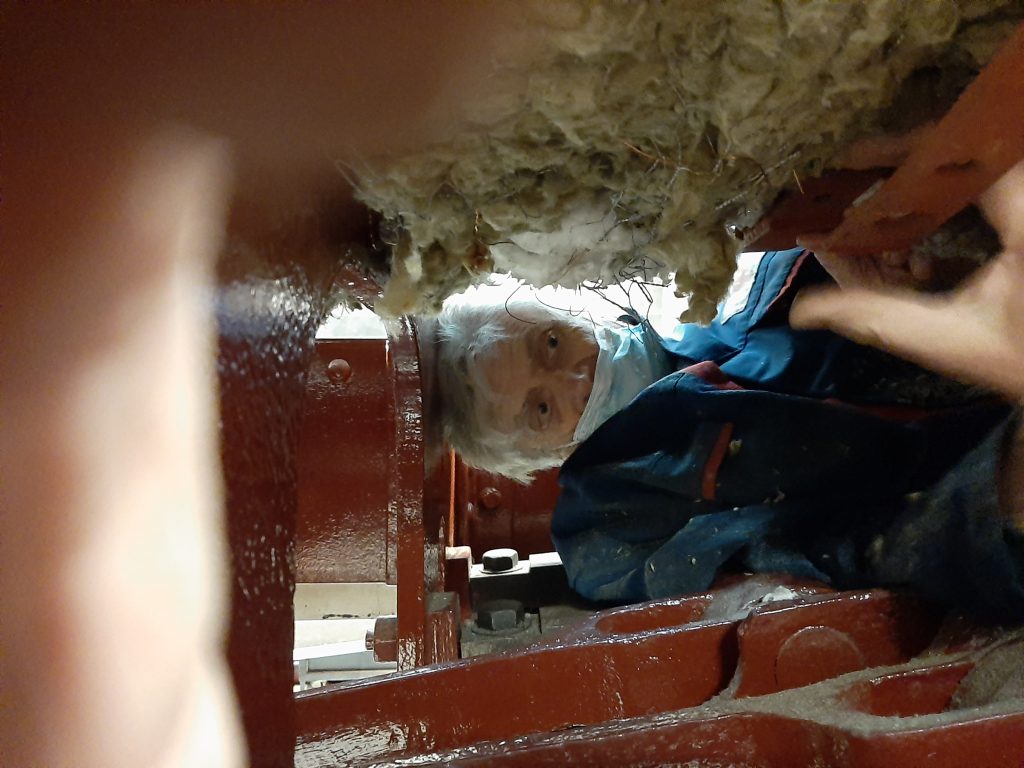 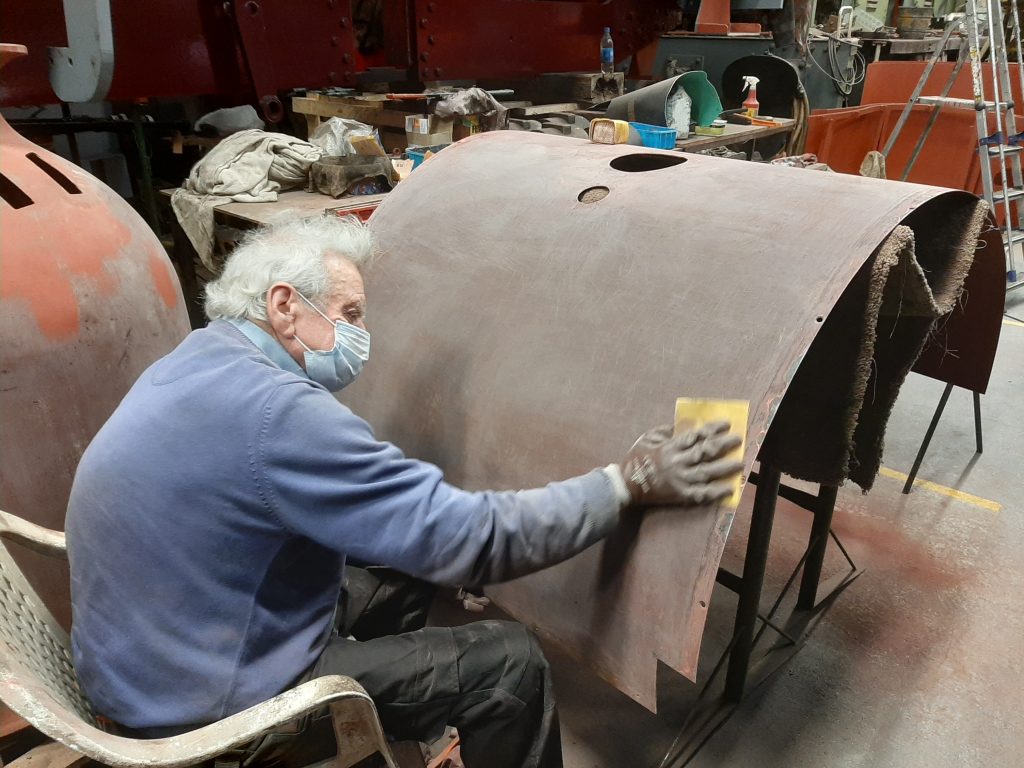 We also feature another photo of Fred sanding down a cladding sheet, just to confirm to daughter Helen (who reads our blog) that he hasn’t gone AWOL and that we are still keeping him busy! 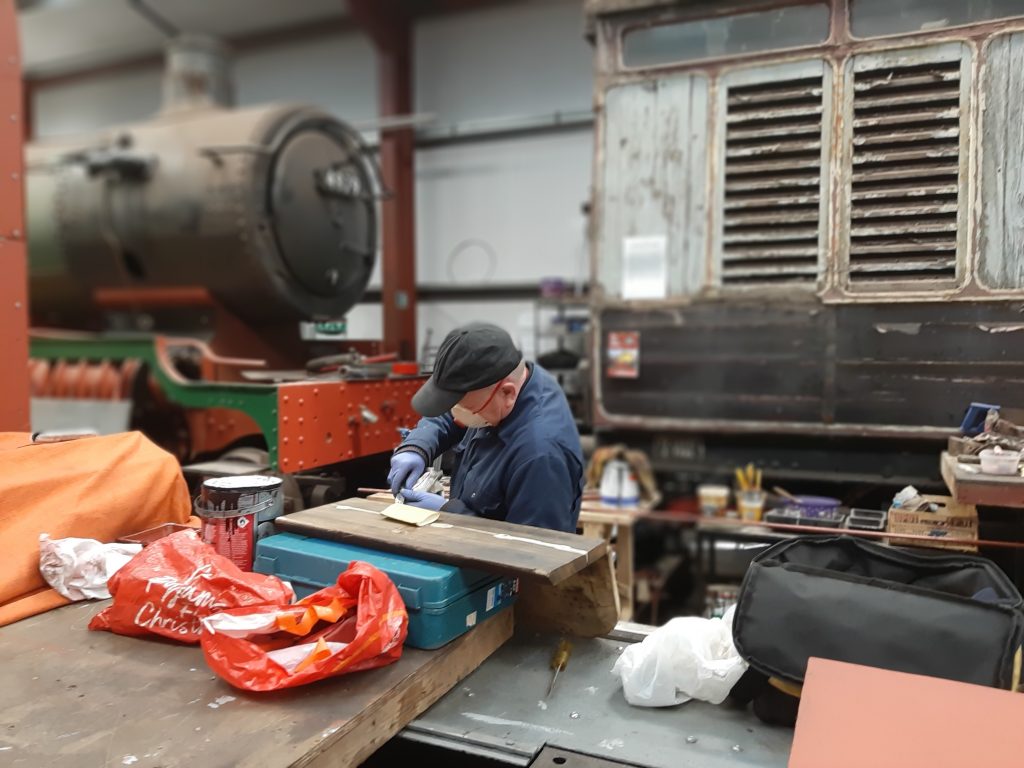 Work has continued on Fluff with Paul Newton attending to a cab seat. 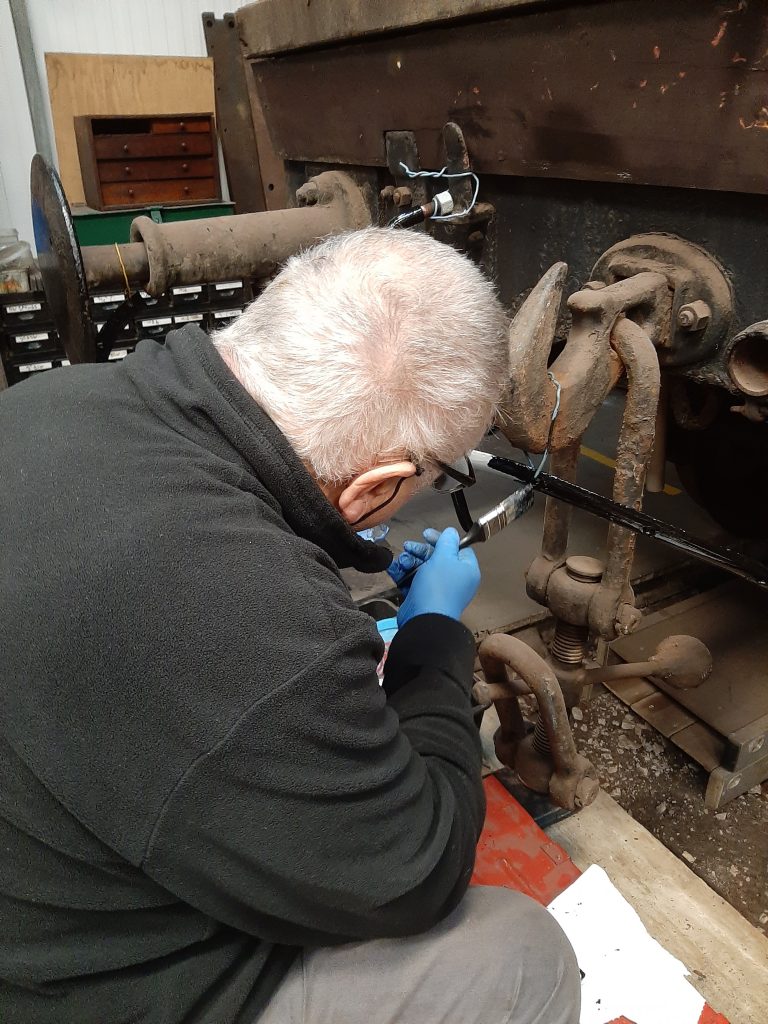 John Davis has been painting some of the fittings. 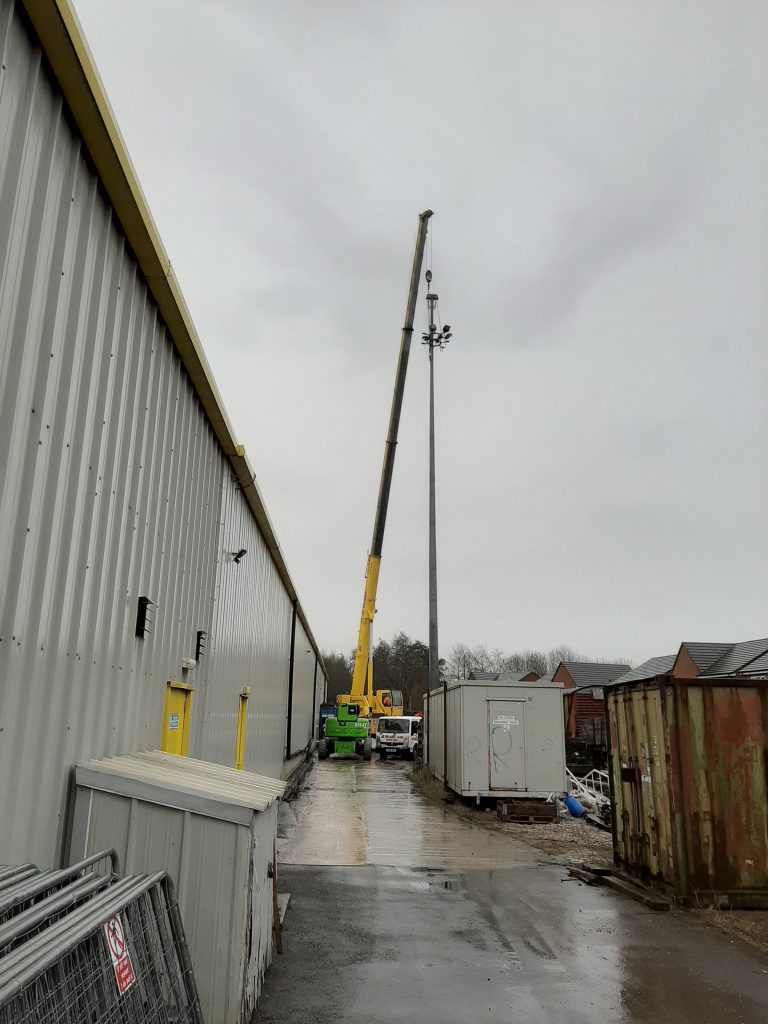 Outside the shed, the remaining tall lighting column was removed by the Ribble Steam Railway on Wednesday as it was no longer required.

We are pleased to be able to record that there is a welcome appetite by our volunteers to work over the Christmas period and so the following working party dates have been arranged:

Finally, the Trustees wish to thank all members for their support during what has been a very difficult 2020 and to wish everyone an enjoyable festive period. We also remember those very frustrated members who, because of the pandemic, have been unable to participate in the Trust’s activities since March and look forward to seeing them again, hopefully in the not too distant future. 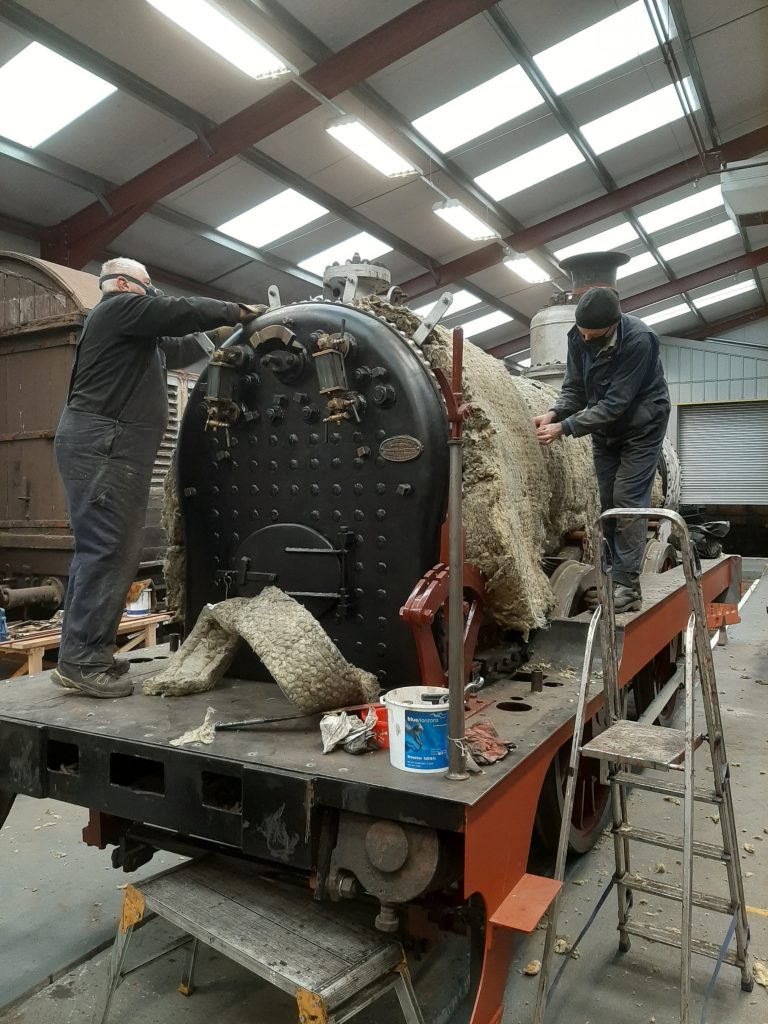 A shorter blog this week but one which records some more visible progress on FR 20. Neil Smith was able to join us on Friday and was soon put to work fitting the fibreglass insulation to FR 20’s boiler. Neil (right) is seen here with John Davis. 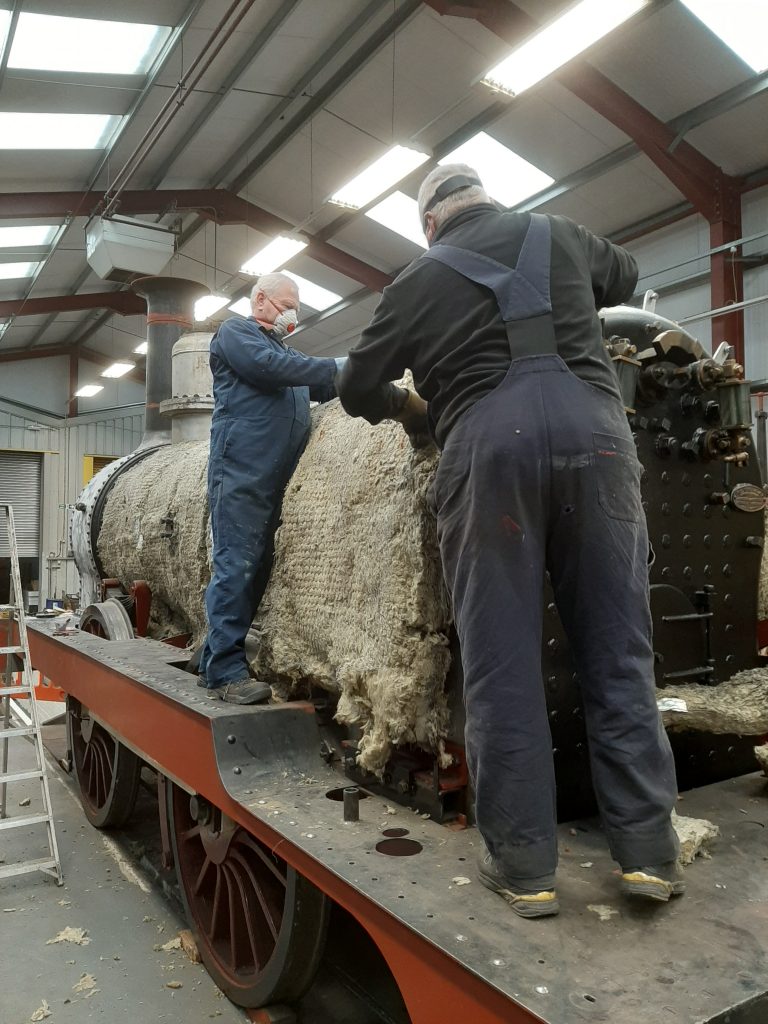 Paul Newton (left) also gave a hand whilst Tim was kept busy with the sweeping brush down below collecting the bits of fibreglass that inevitably fell to the ground during the progress. 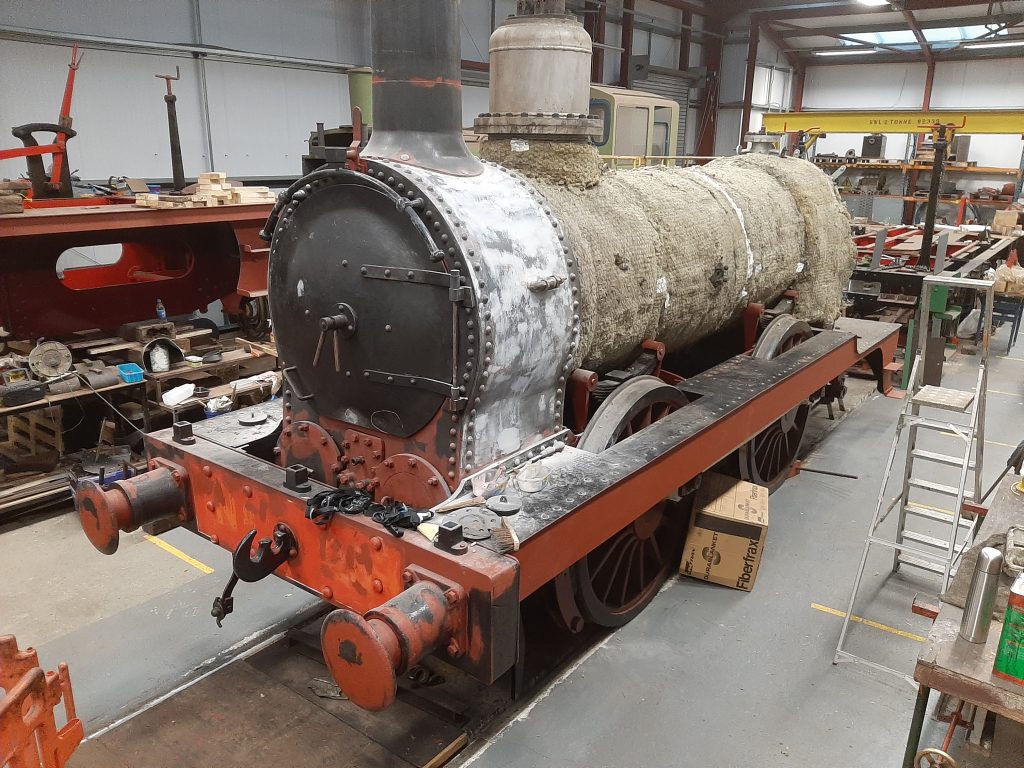 The almost finished job is seen here – the former insulation for the top of the dome has gone awol so that needs making up this week with new.  We are hoping that Neil might get a few more days of annual leave to help us get on with the rest of the jobs! The next task will be to fit the crinolines. 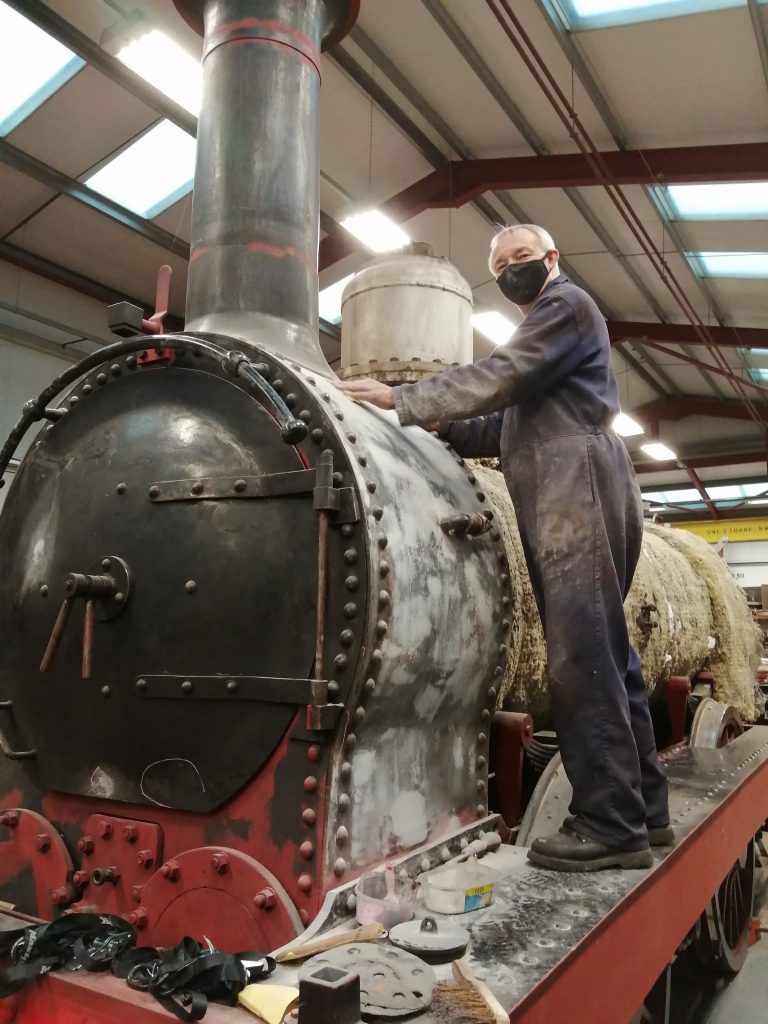 When he wasn’t on sweeping up duties, Tim carried on sanding the filler on the smokebox, which still has a bit to do, but is getting there. 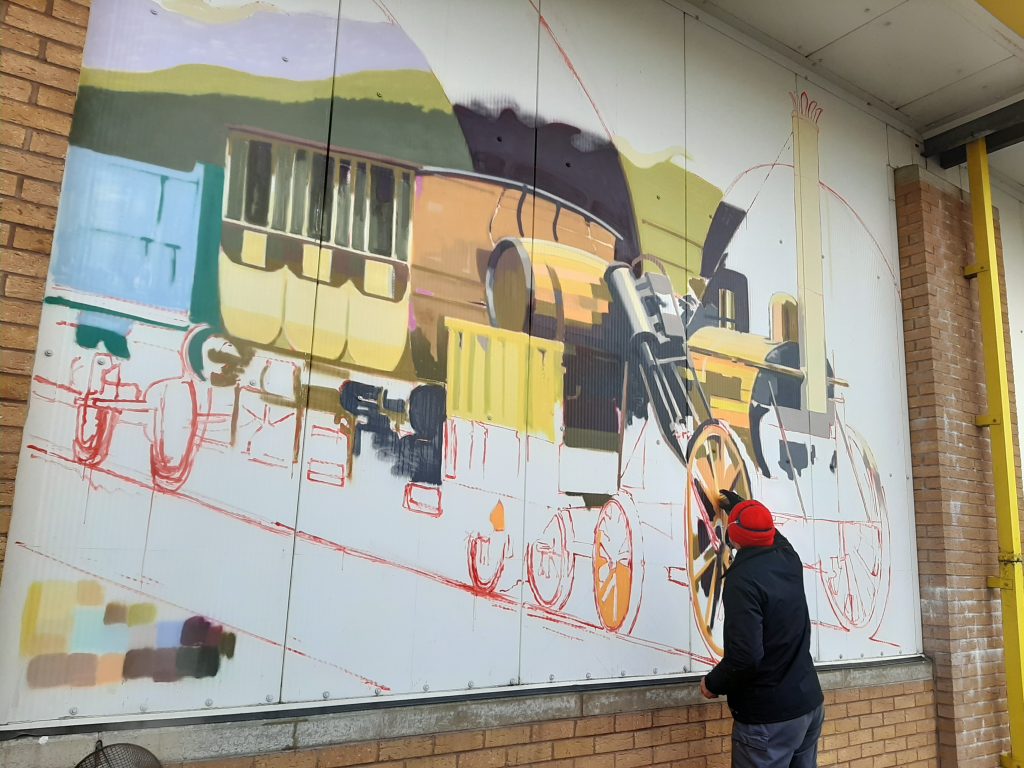 Outside, local artist Gavin Renshaw, who was featured in the blog earlier this year when he recorded the work being undertaken on Caliban, has been commissioned to paint some timeline murals on the outside of the RSR’s museum. He is seen here at work on the first mural which features Stephenson’s Rocket. The end result should be impressive! 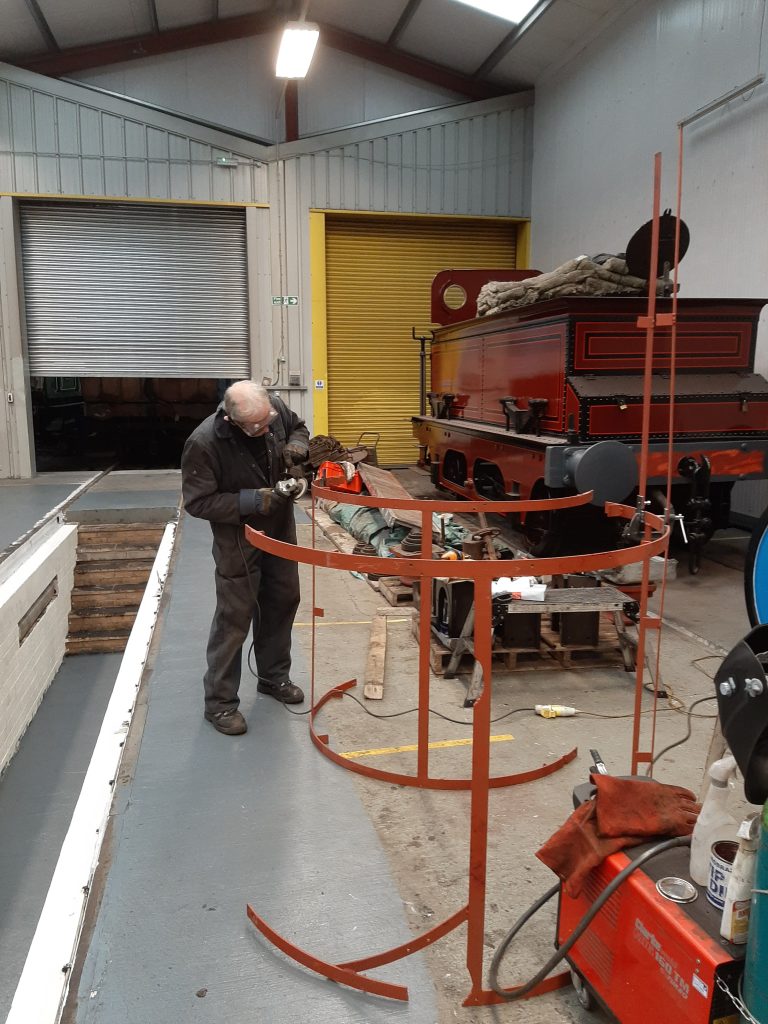 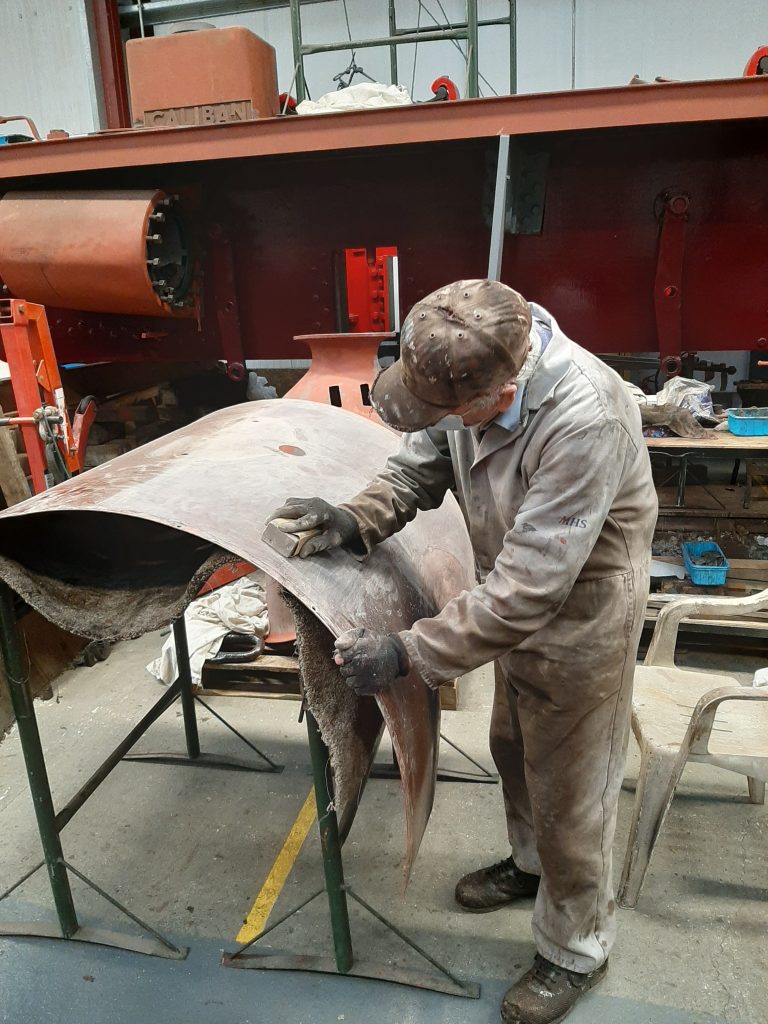 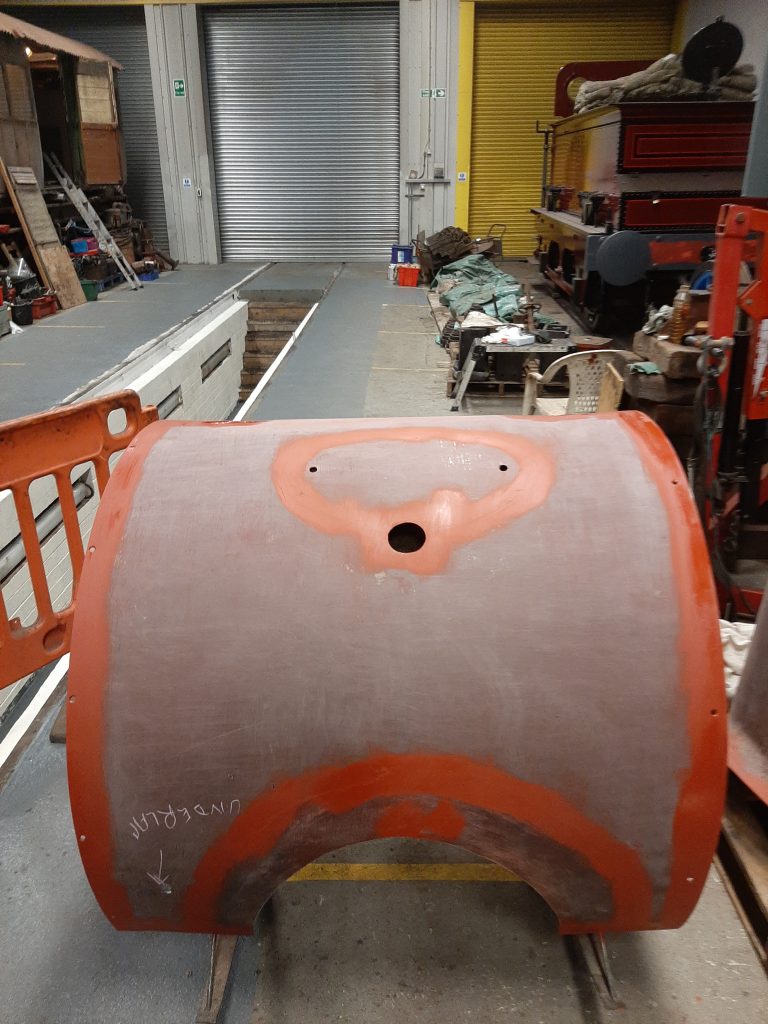 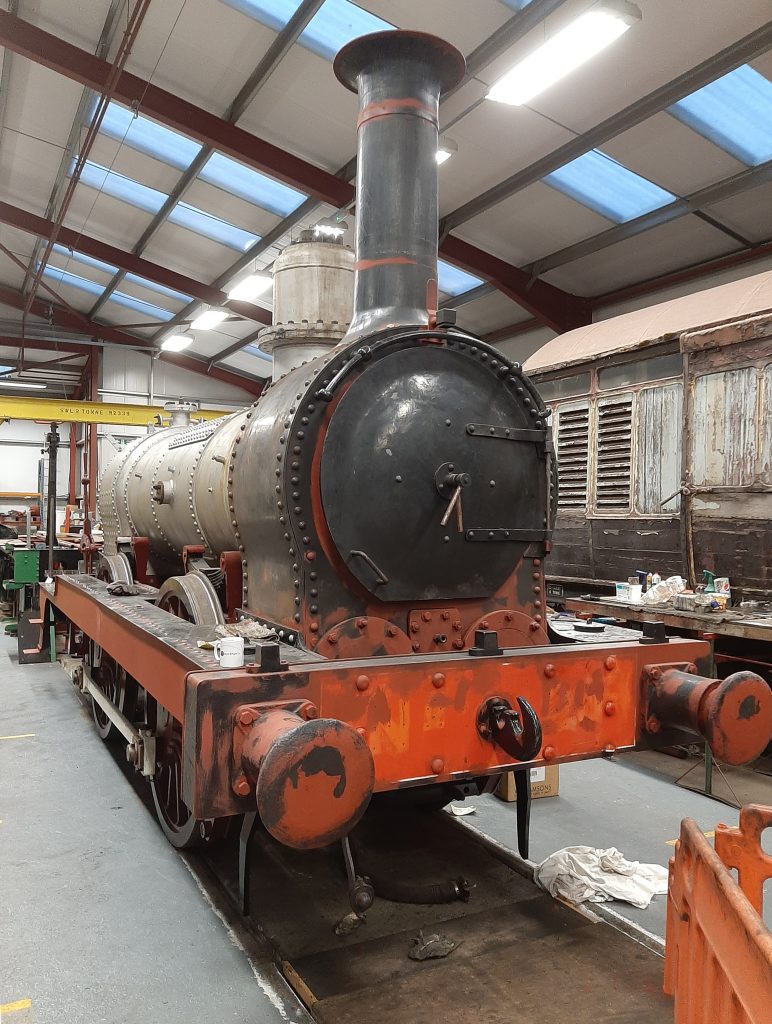 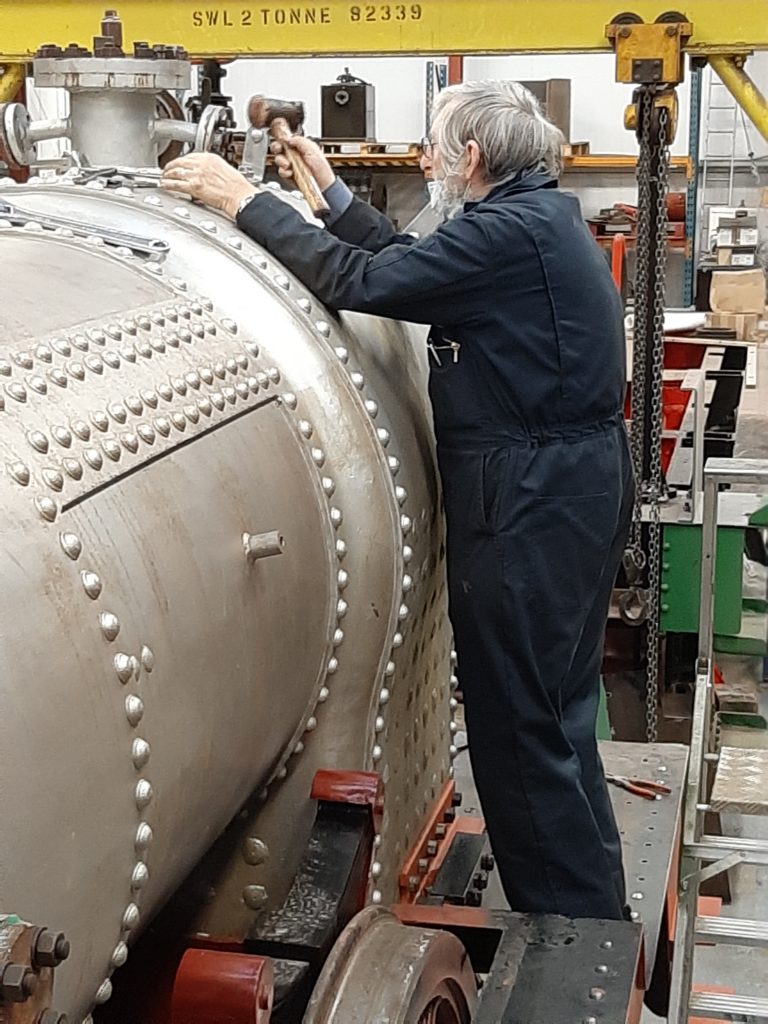 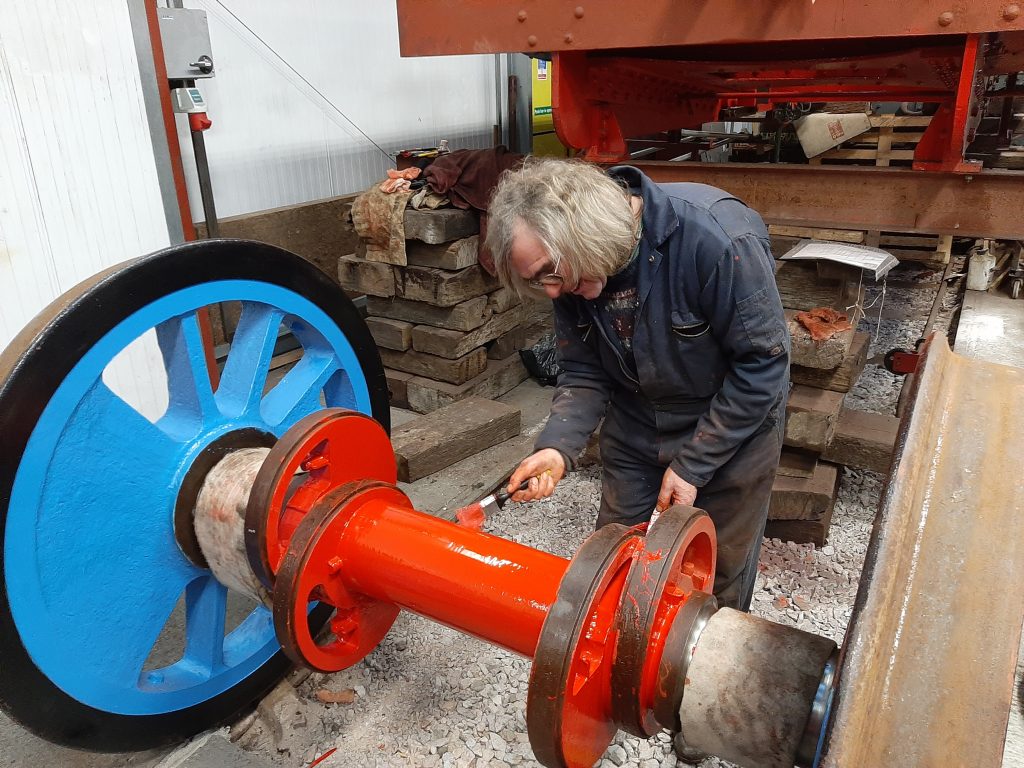 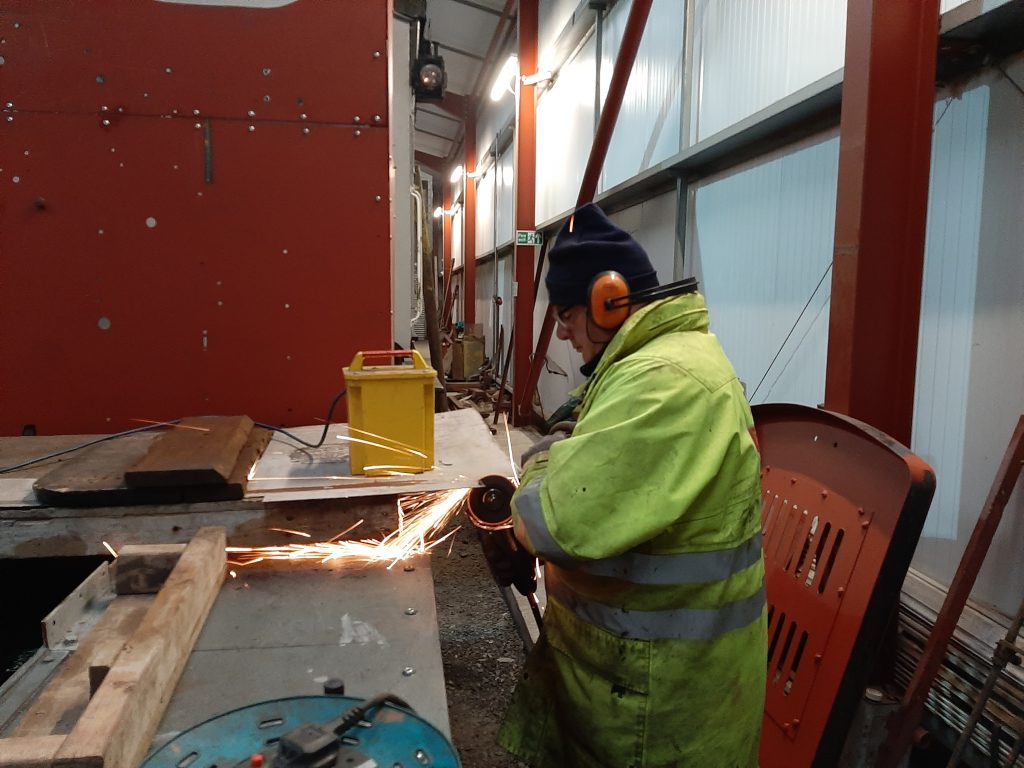 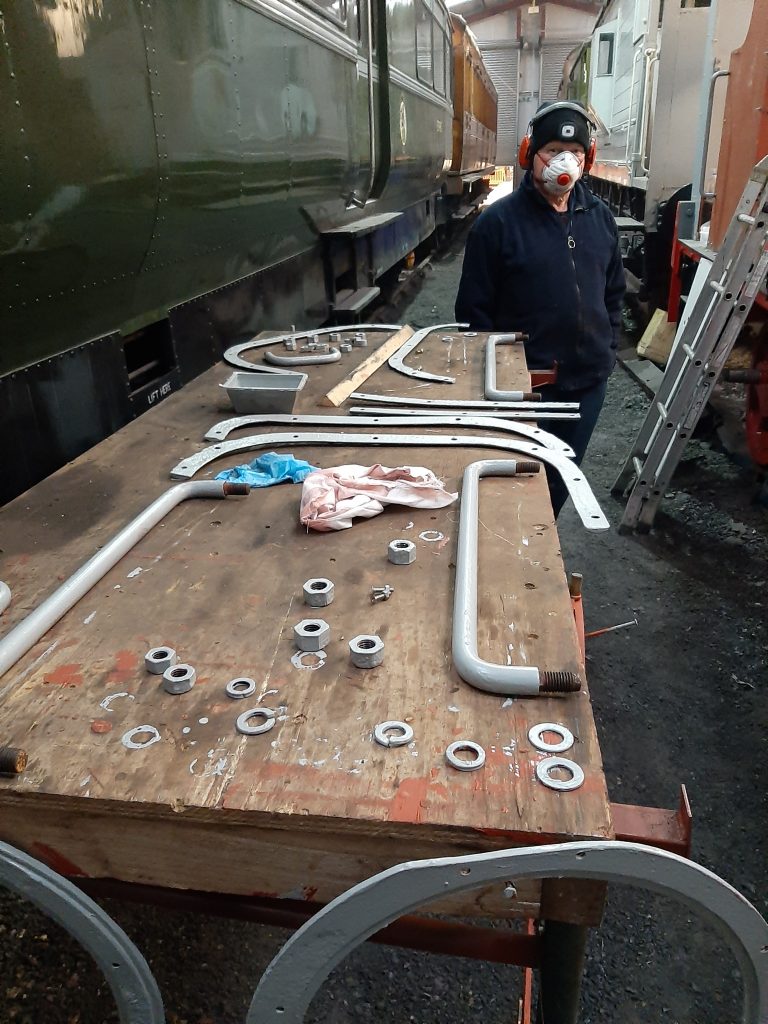