Unfortunately the blog team has been hit by Covid this week, so we have a reduced service operating at this time (does that remind you of a big railway?!).

Keith picked up the refurbished valves for 5643 from Tyseley last Monday and Duncan has been machining the spindle bearings to suit the new spindle sizes. 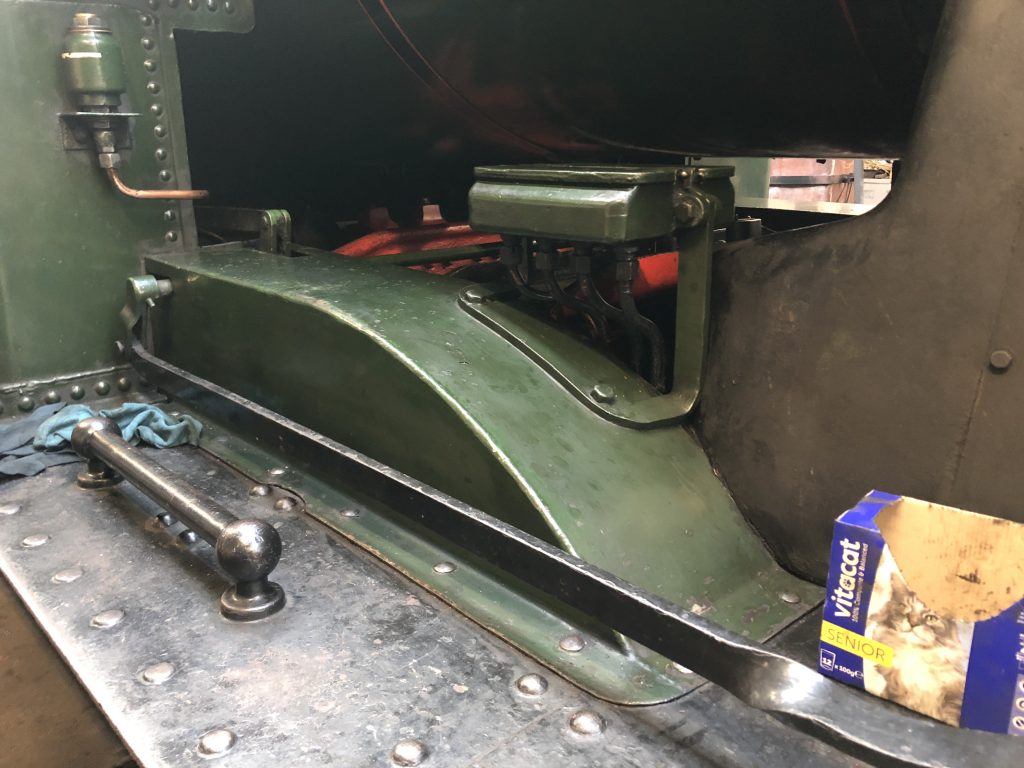 A working party was convened at Bury last Tuesday when one of the splashers was re-fitted. 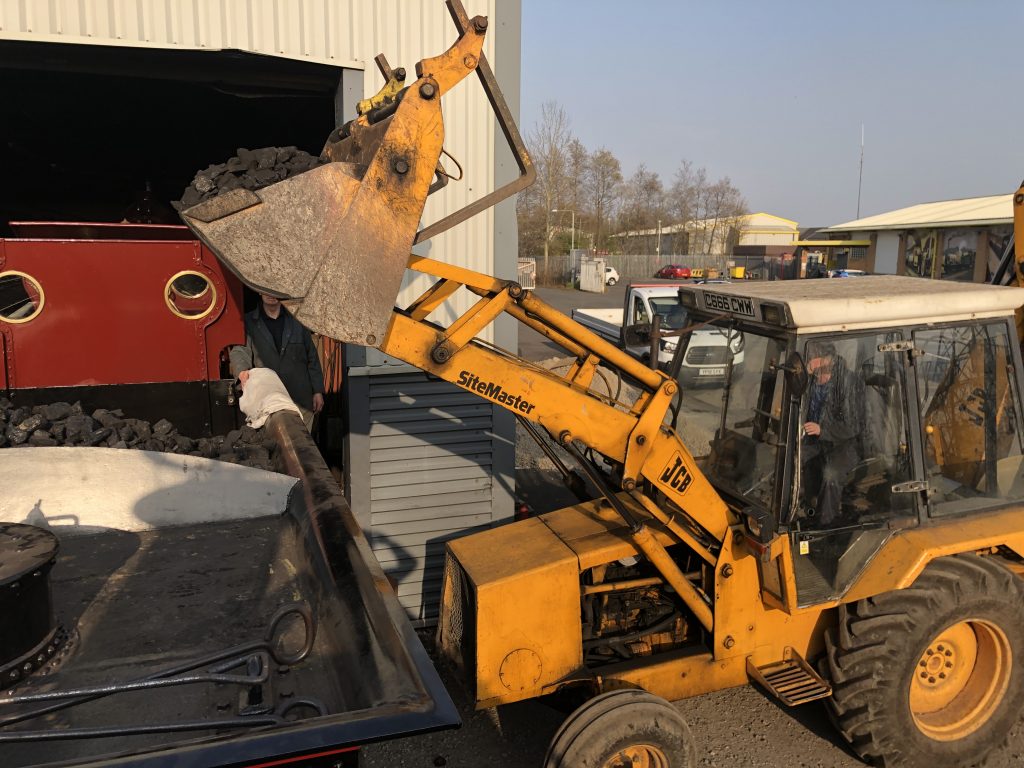 Last Wednesday and Friday were spent in getting FR 20 ready (including coaling up) for the RSR’s Spring Steam Gala at the weekend. FRT volunteers also spent time giving the RSR’s Museum a much needed spring clean in readiness for the start of the new season. Thanks go to all those who assisted in making the weekend a success. 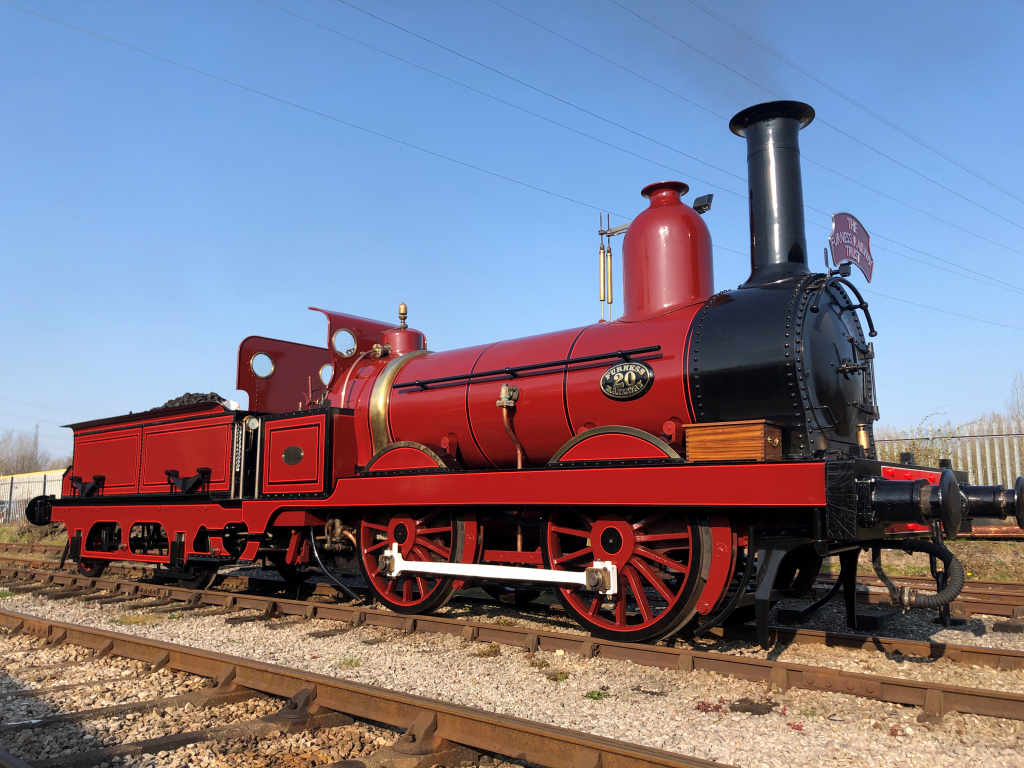 We have a photo here of a spotless FR 20 taken by Sam.

For those unable to be at Preston over the weekend, the following video gives an impressive view of proceedings. 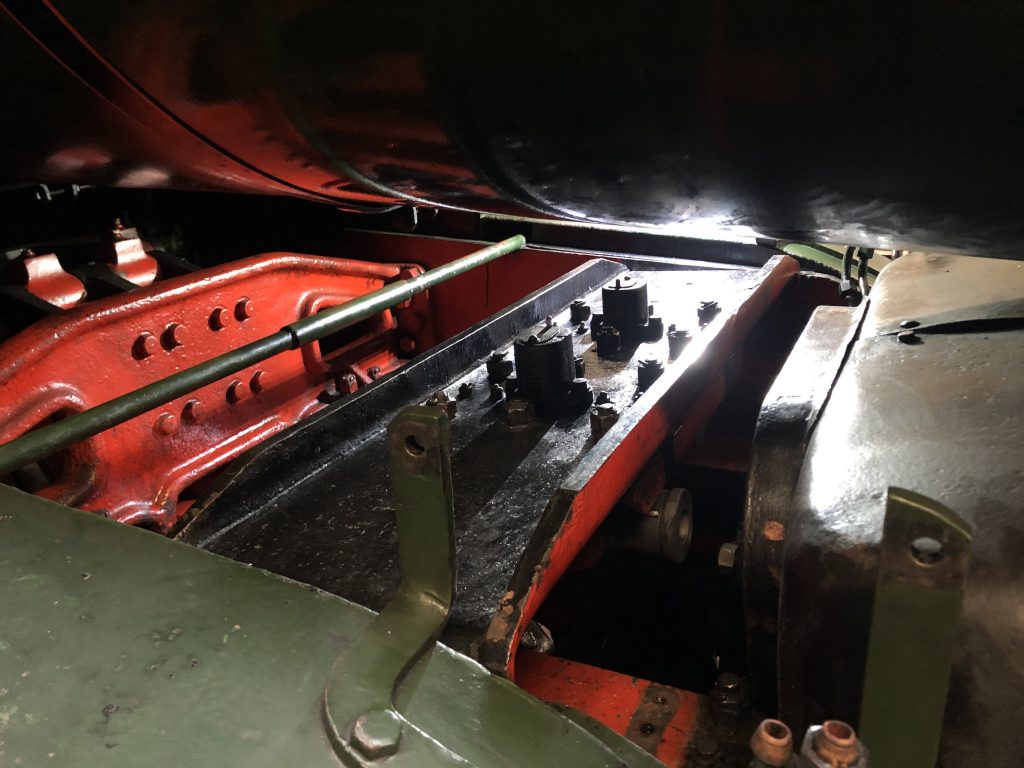 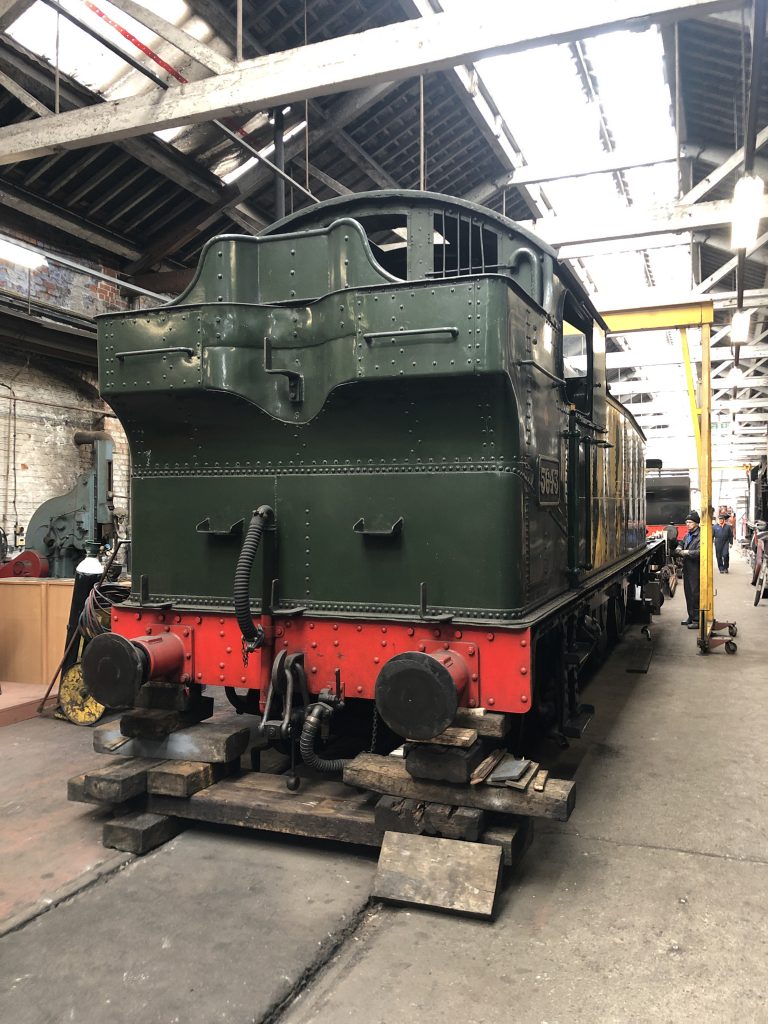 Keith is planning to pick up the refurbished valves from Tyseley this week after which it will be necessary to turn down the valve spindle glands to suit the newly machined spindles. 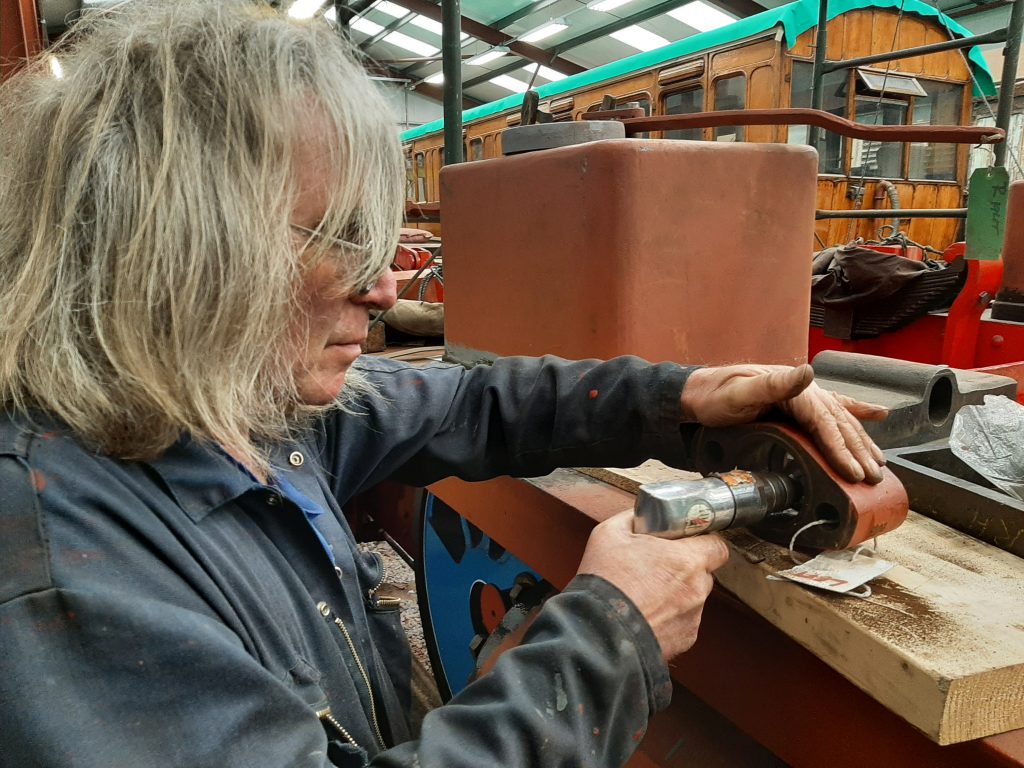 Ade has continued his work on Caliban, seen here cleaning out its valve spindle glands. 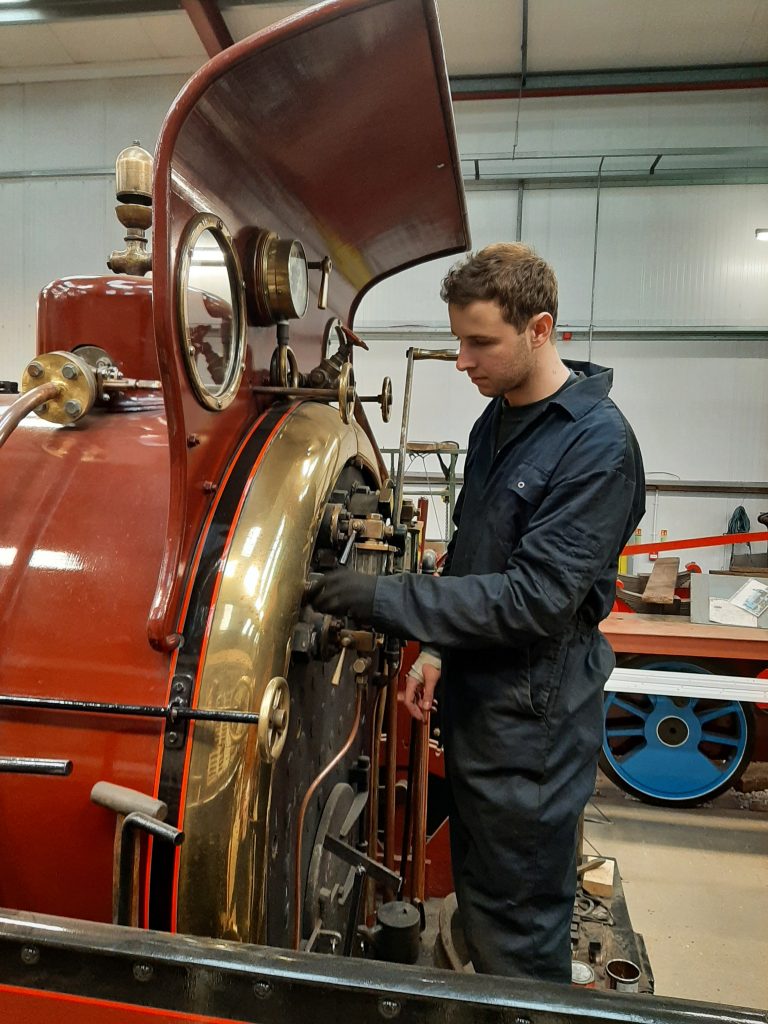 Furness Railway No. 20 is due to appear at next weekend’s Ribble Steam Railway Gala. Sam Middleton was given the task of re-fitting the washout plugs. 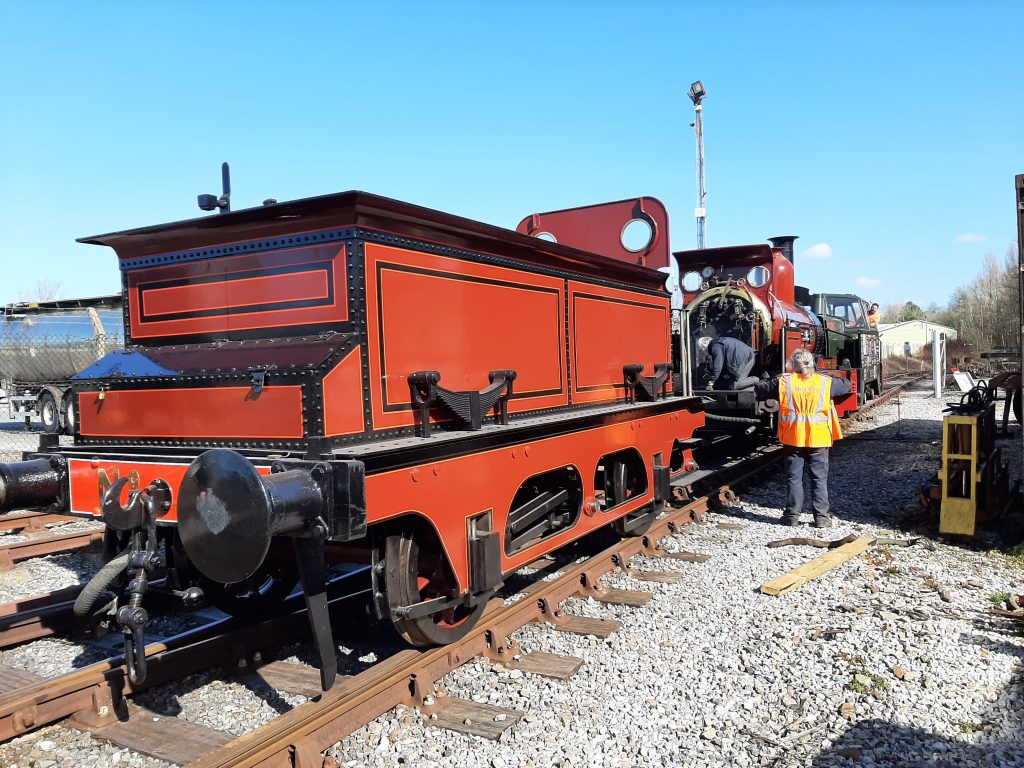 News was received that trackwork was due to take place in the RSR’s yard at Preston this week which meant that FR 20 had to be transferred to the RSR’s running shed rather sooner than planned, before this trackwork is started. Ade kindly came in on Friday to assist with the shunt and FR 20’s engine and tender are seen here in the process of being coupled up after winter maintenance. 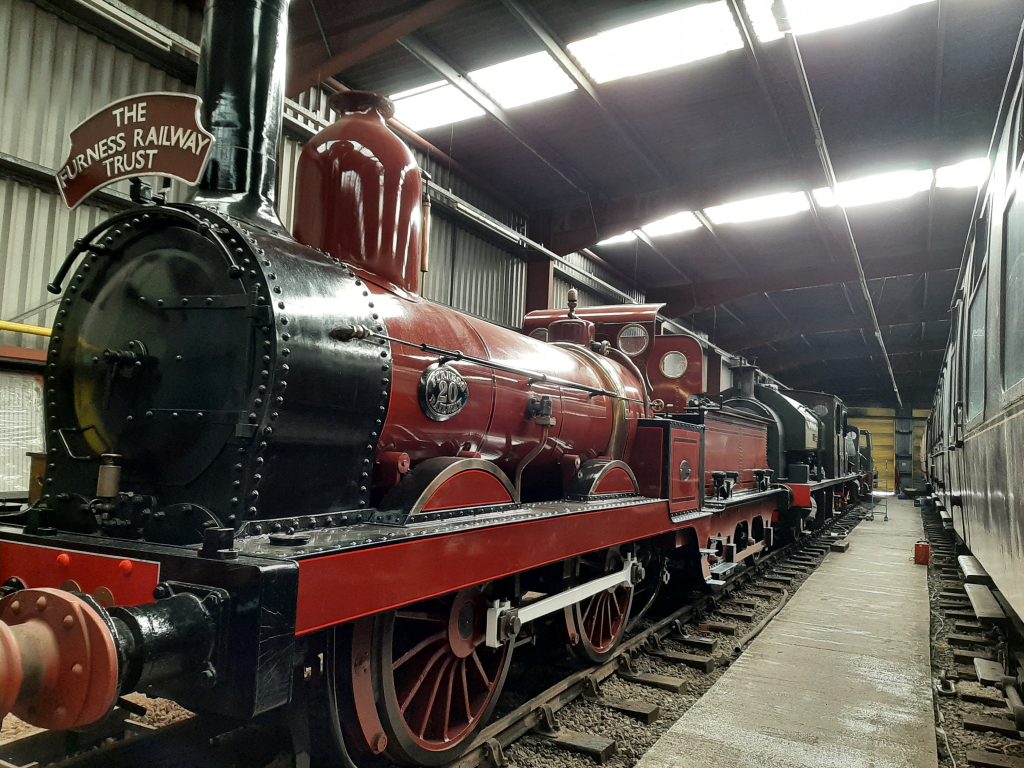 FR 20 is pictured with the other three locomotives expected to take part in the Gala.

Finally, work has continued on Great Eastern Railway Royal Saloon No. 5 this week with Roger, Fred and John Davis doing a great job in cleaning the corridor woodwork of the old varnish whilst Phil has been fitting new hardboard to the corridor roof. 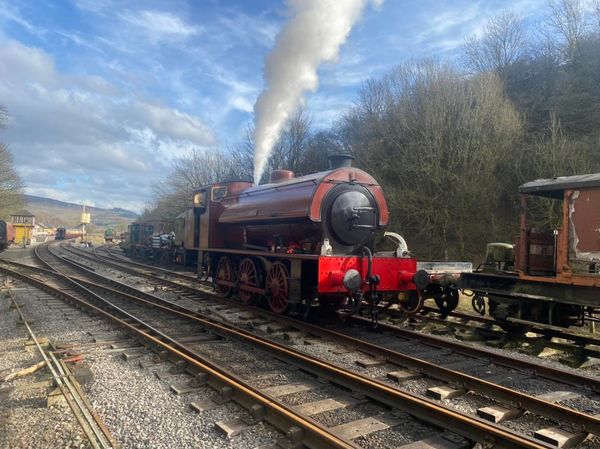 We start with the news that the FRT’s ‘Austerity’ 0-6-0ST Cumbria passed its formal 14 month steam test last Wednesday and successfully operated a test train in readiness for traffic this year at the Embsay & Bolton Abbey Steam Railway. Thanks to Matt Anderson at Embsay for making this happen. 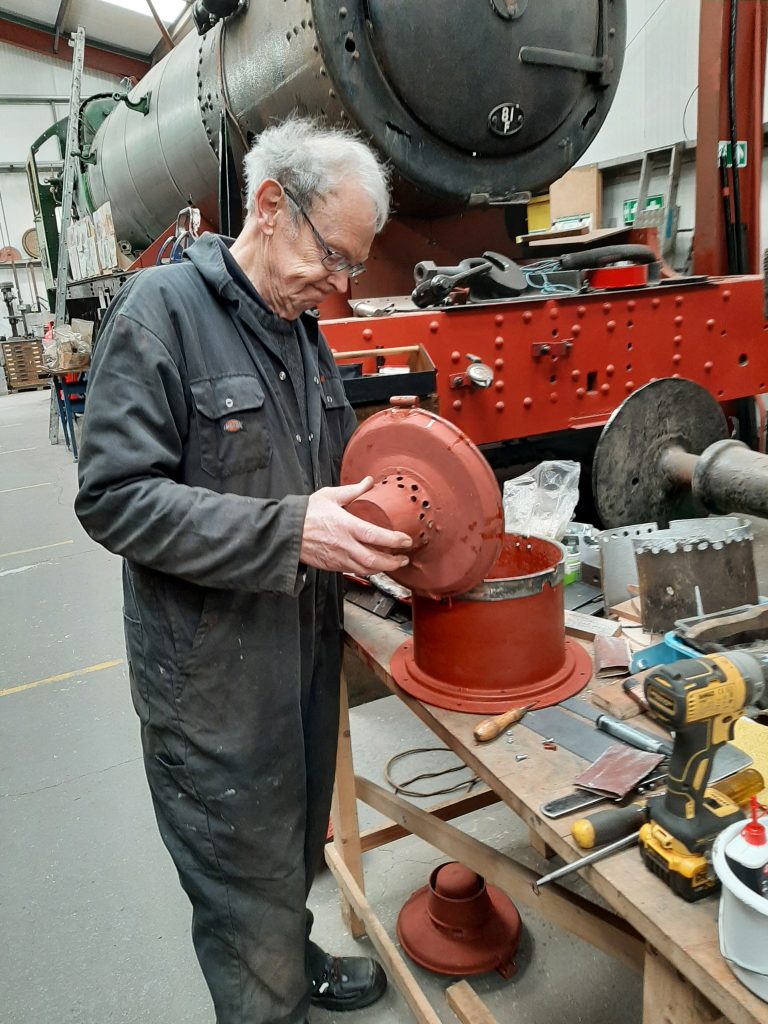 Back at Preston, work continued on the overhaul of GER Royal Saloon No. 5. John Dixon has been checking over each of the repaired gas lamp housings and ensuring that tops and bottoms of each housing fit sweetly when paired up. 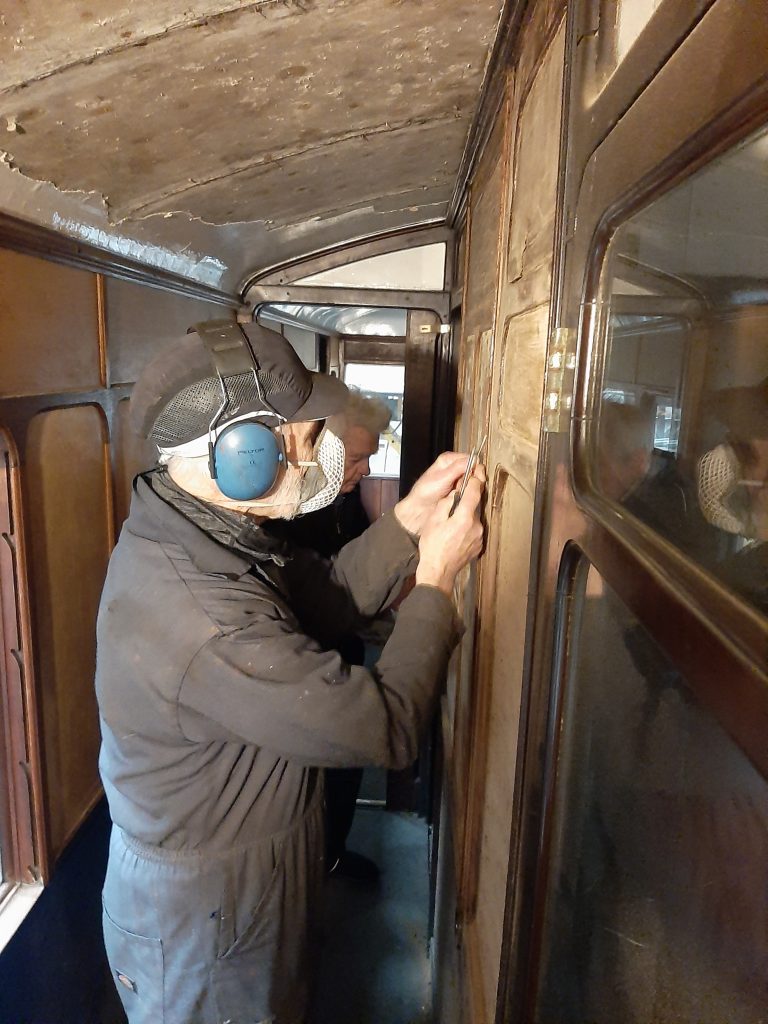 There has been more work inside the coach to remove old varnish, undertaken by Roger and Fred (pictured here) plus Ed and John Davis. Phil Bell has been attending to the doors and associated fittings to ensure that they all work satisfactorily.

Keith has welcomed the arrival of three sheets of steel which will keep him busy repairing Wootton Hall‘s tender tank whilst Ade has been working on Caliban’s pistons. 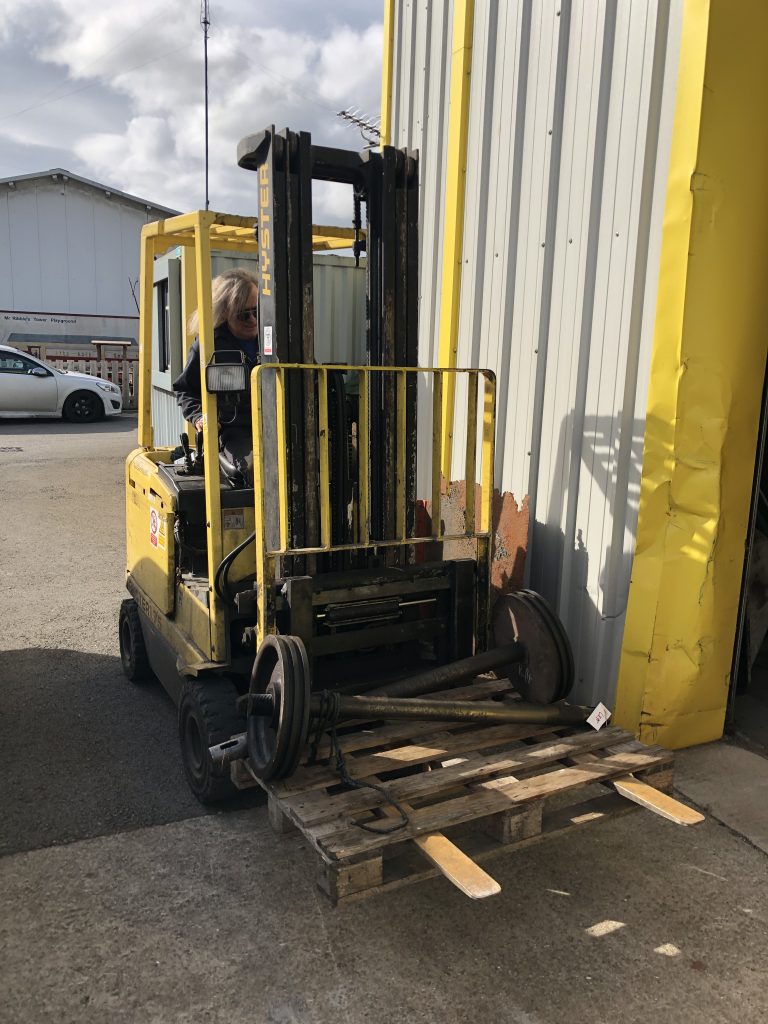 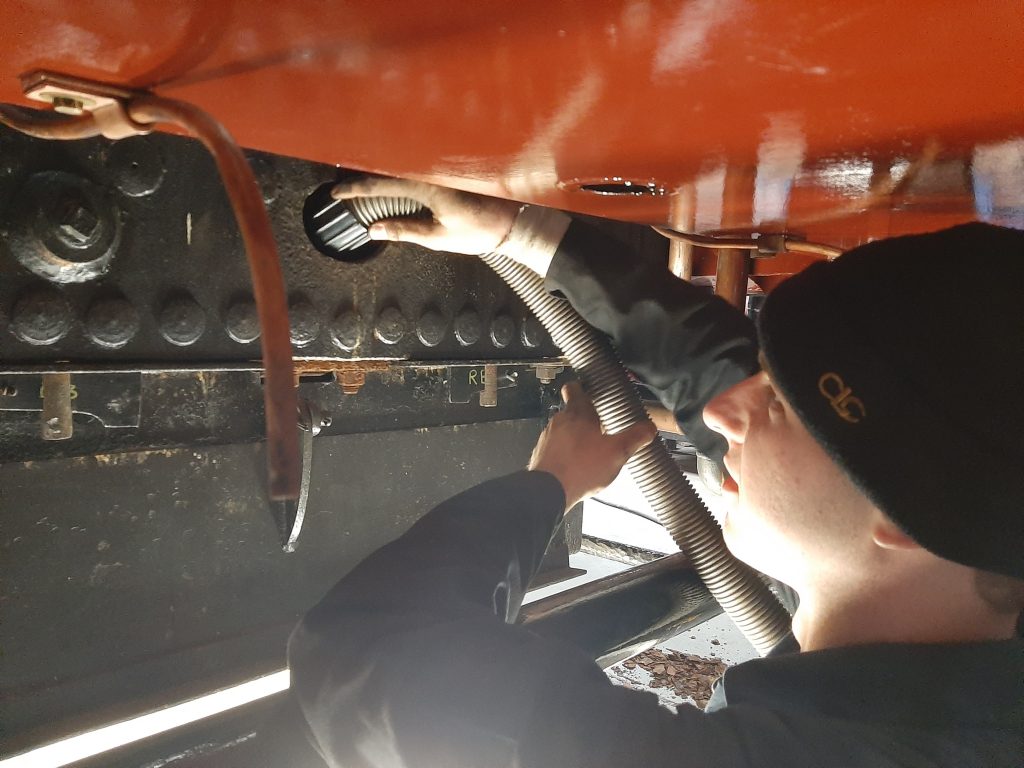 Sam and Tim had a productive time on Friday cleaning out scale from FR 20’s foundation ring using an air line and even the vacuum cleaner, which accessed the ring through the mudholes. We will be starting to put FR 20 back together this week in readiness for its appearance at the RSR’s Steam Gala on the 26th and 27th March. 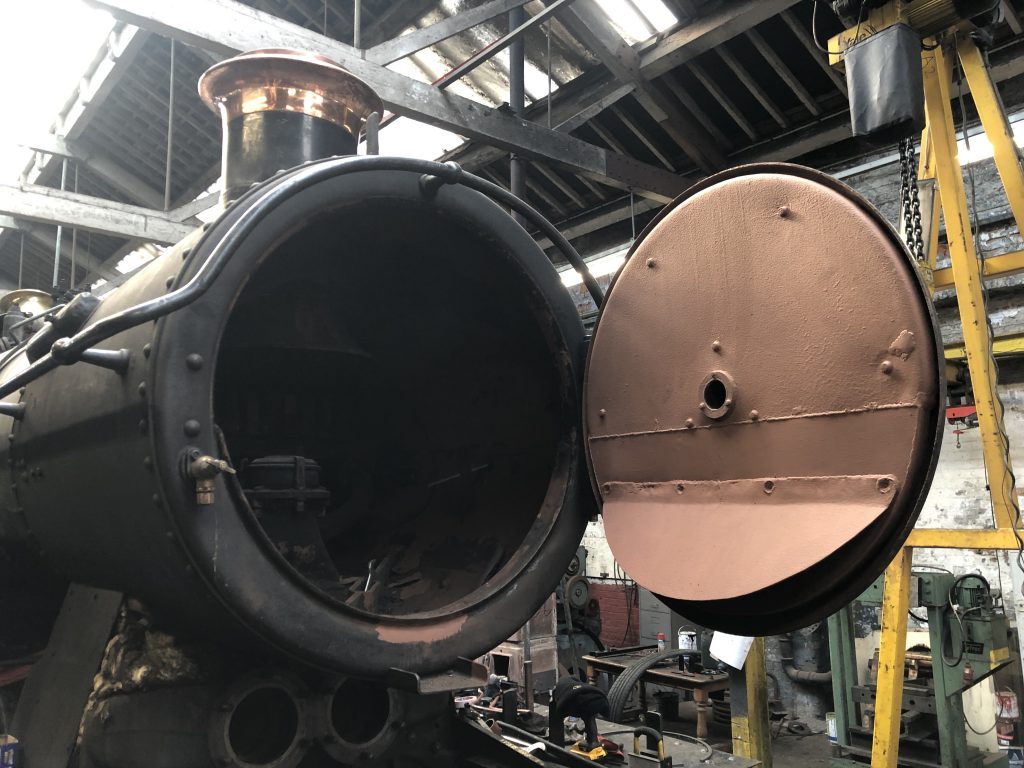 Finally, work has continued on 5643 at Bury with last Tuesday’s working party re-fitting the smokebox door which has had its inner plate patched up. 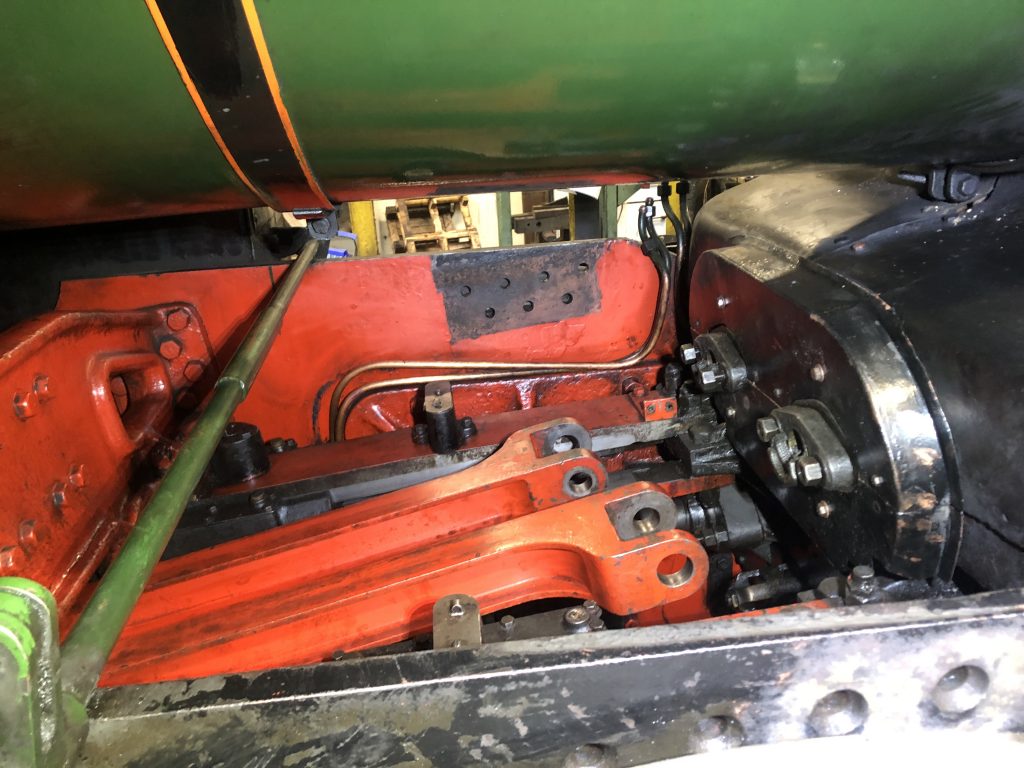 The motion has also been re-fitted in anticipation of receiving the valves back from Tyseley Loco Works, where the valve spindles are being skimmed to rectify wear.

Apologies for the lack of a blog last week – we just ran out of time, partly due to illness. However, there has been plenty going on, so a quick synopsis here. 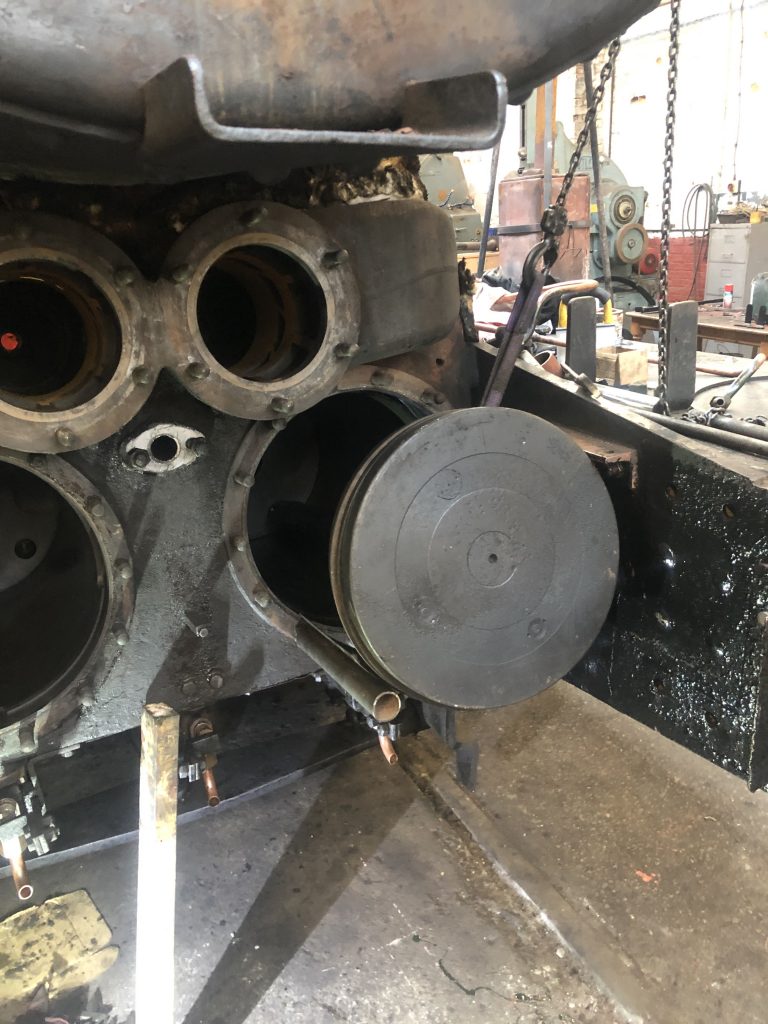 There have been further working parties to Bury to remove 5643’s pistons so that any swarf resulting from the valve re-bores could be removed. 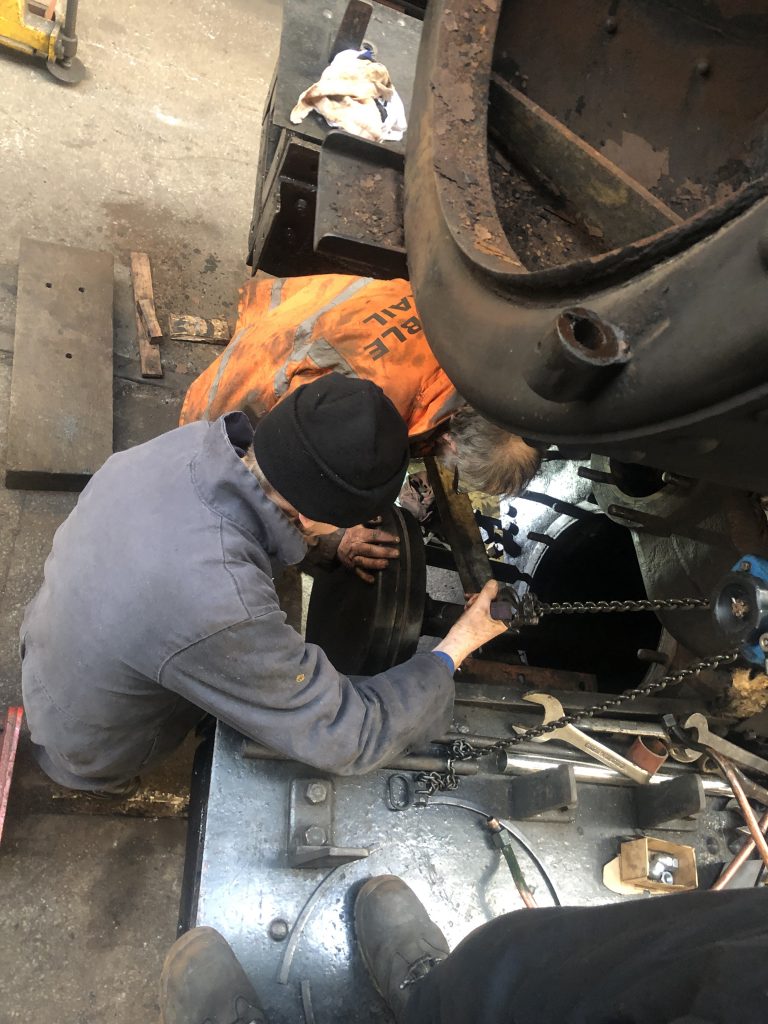 The pistons have now been re-fitted, with John Dixon seen coaxing one of the pistons into position.

The smokebox door has been removed so that corroded platework (seen above) can be replaced.

Work has continued on Great Eastern Railway Royal Saloon No. 5 where Phil Bell has been doing preliminary work to replace some of the corridor ceiling. John Davis and Roger have been removing more old varnish from the corridor veneer. 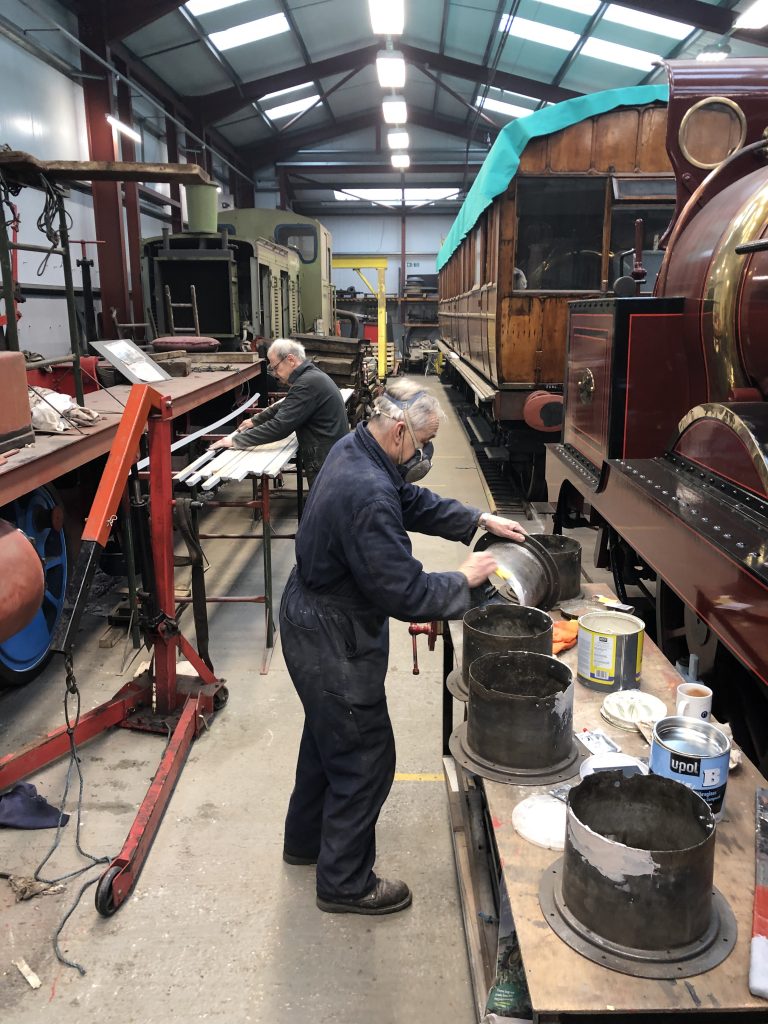 Tim has been working with John Dixon to repair the gas light housing turrets prior to re-fitting. 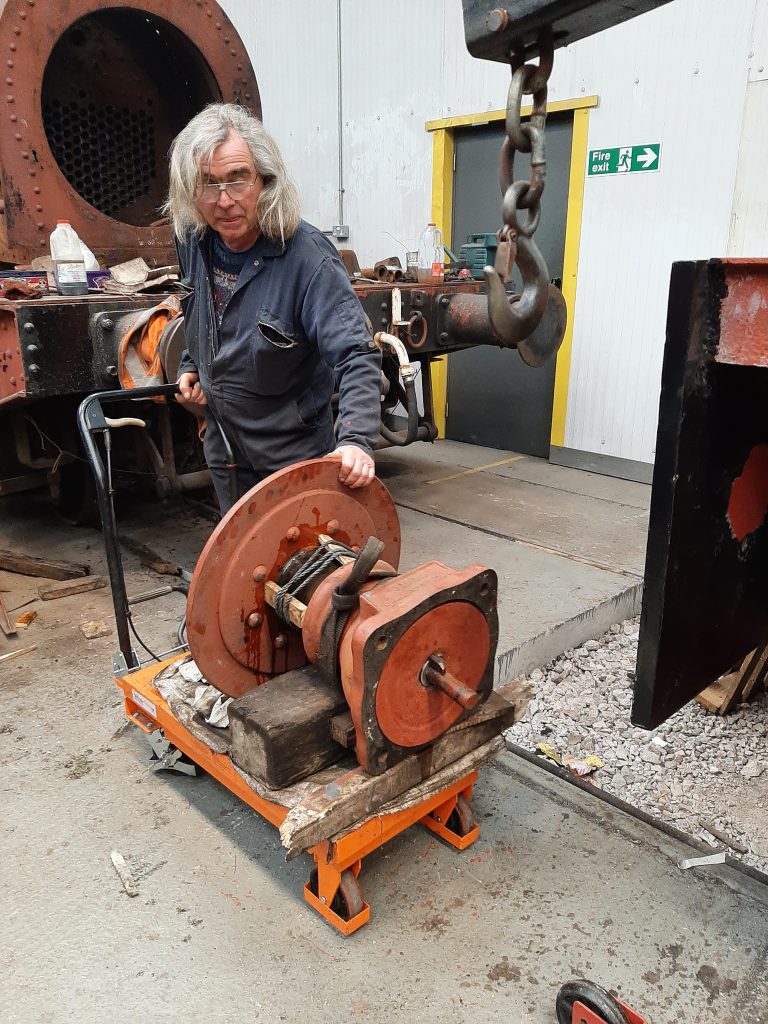 Ade has refitted the second of Caliban’s front buffers, which had to be removed to enable the re-bore of the cylinders to take place. 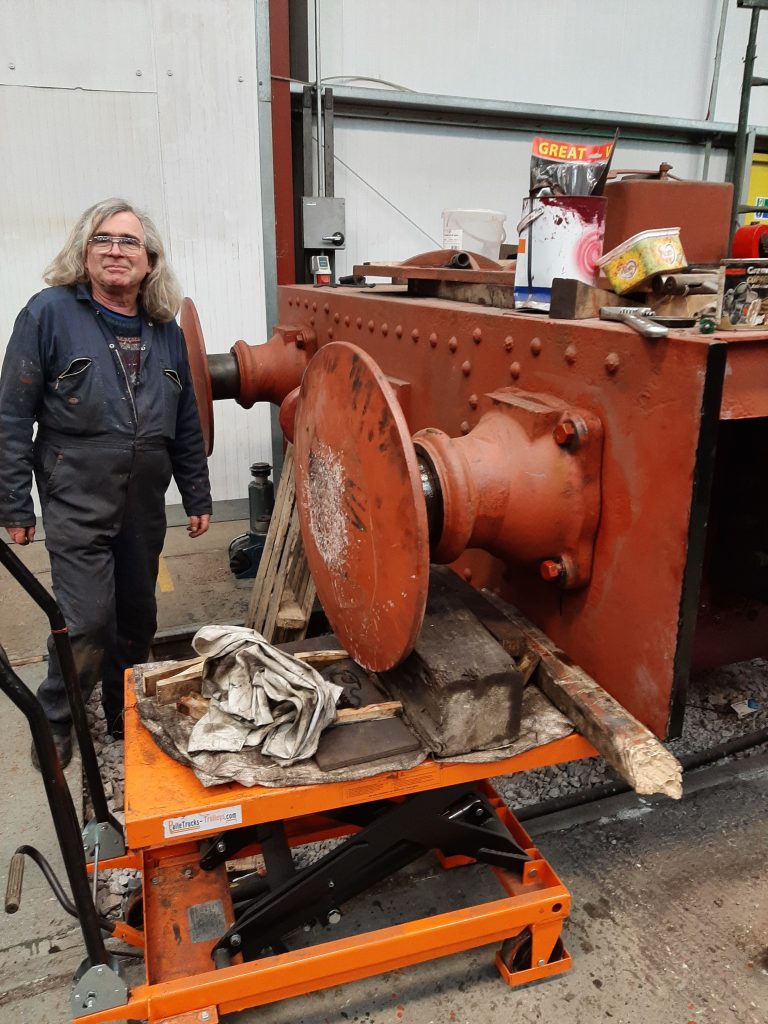 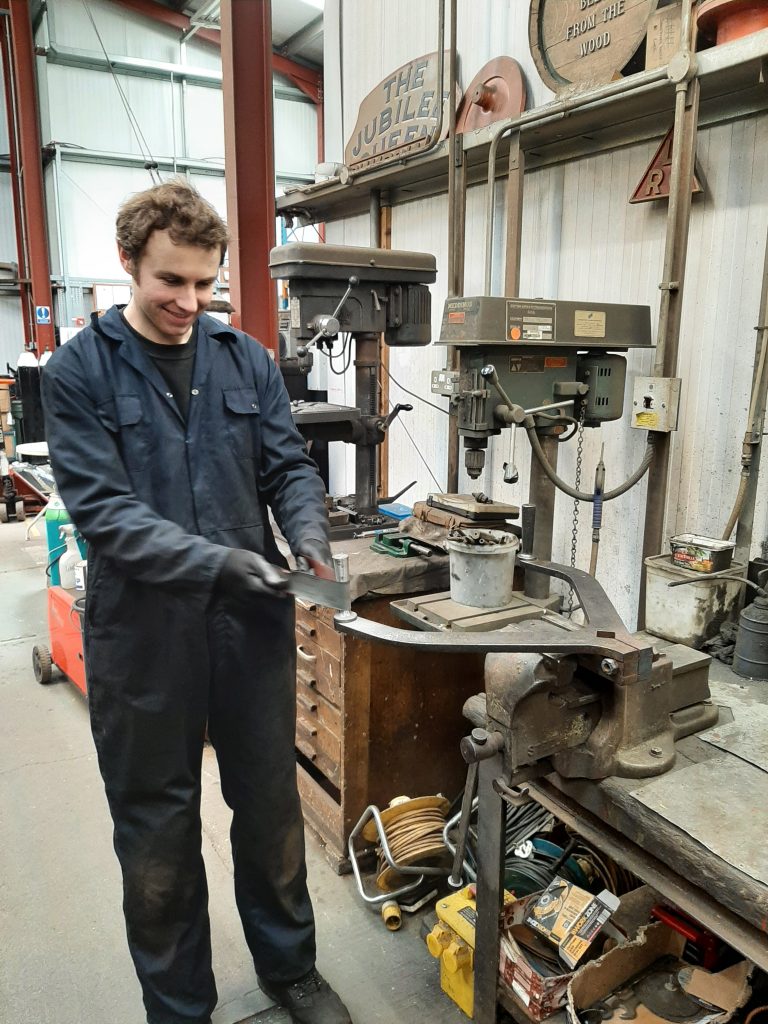 Sam has been cleaning up Caliban’s regulator handle with emery paper. 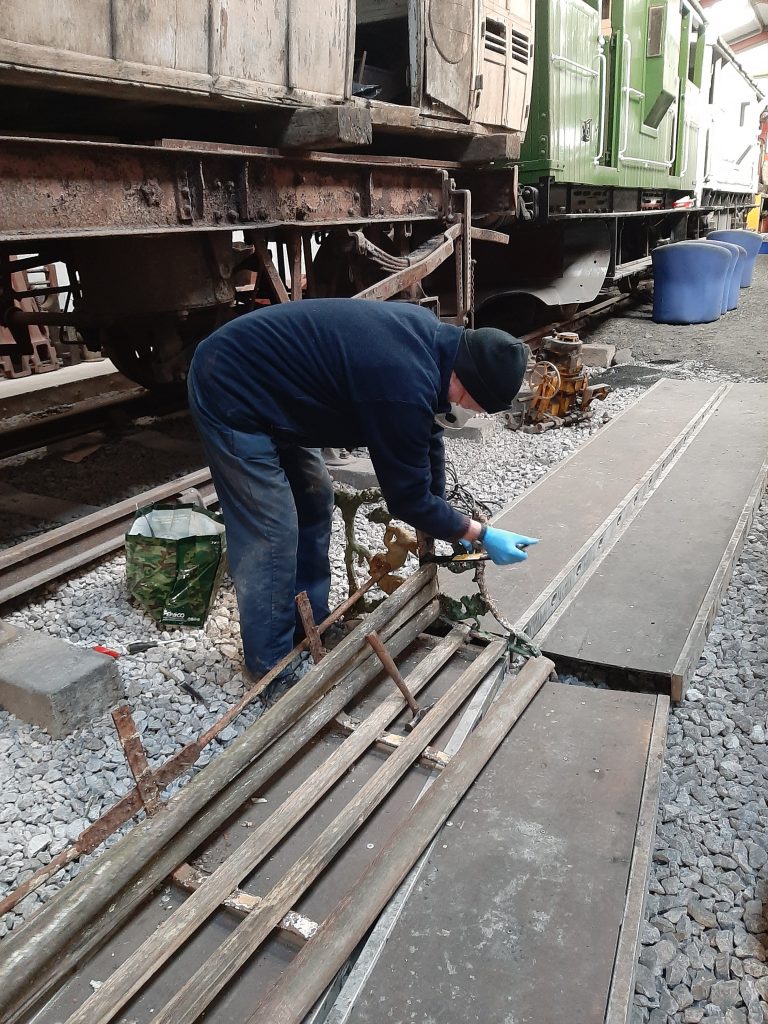 Paul Newton has set about restoring the Furness Railway bench that was brought to Preston recently by Jim Kay. 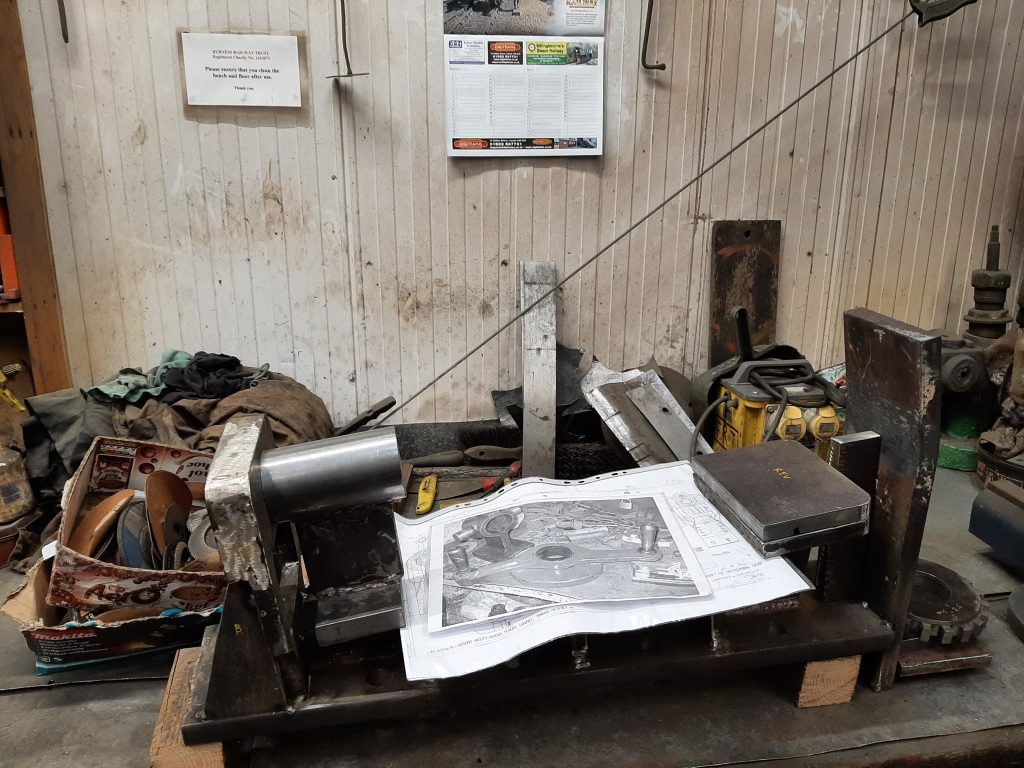 Keith has been progressing the fabrication of Wootton Hall’s reverser control.

There has been good news from Embsay in that Cumbria’s safety valves and blower/sanding valve have both returned from South Coast Steam after repair and been fitted. The locomotive has now been steamed and the valves set, ready for a visit from the boiler surveyor this Wednesday. 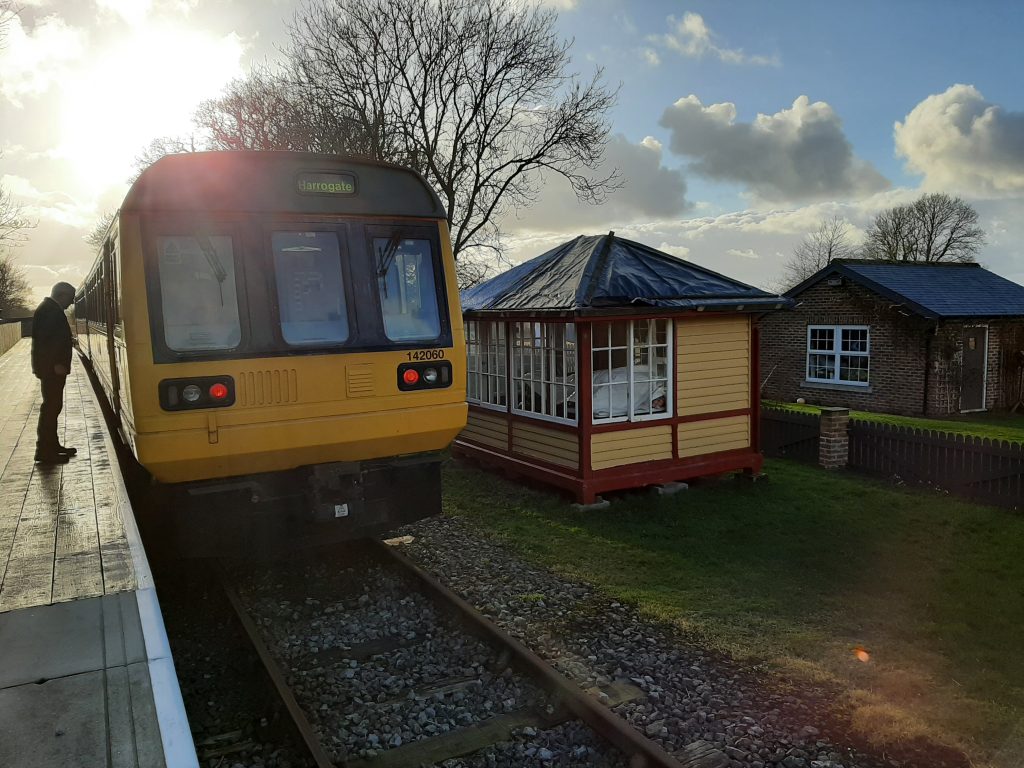 Finally, a visit to Scruton on the Wensleydale Railway on Saturday found the  former Vickers Gun Range signalbox (previously donated by the FRT) looking in good shape. It is planned to site this permanently at Leyburn to control a loop that is being installed.