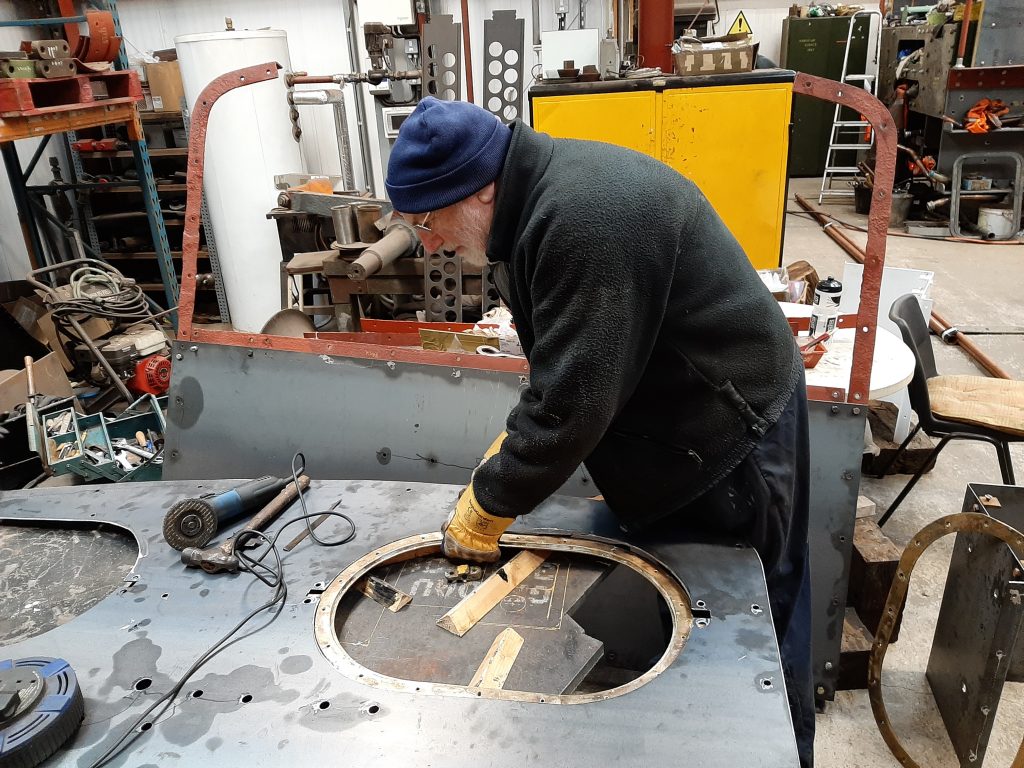 Keith has cut out the holes in Fluff‘s rear upper cab plate and Phil Bell has been busy making the final adjustments and fitting the brass-rimmed windows. 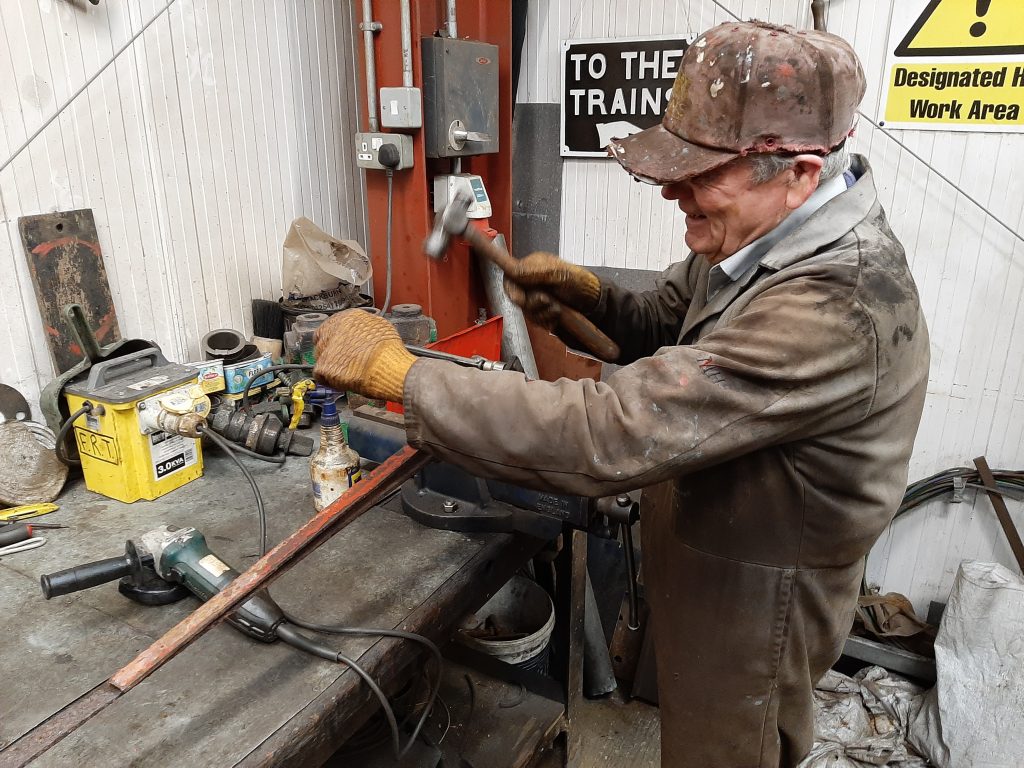 Fred has been cleaning up the sand box linkage and is seen here persuading a stubborn nut to move. 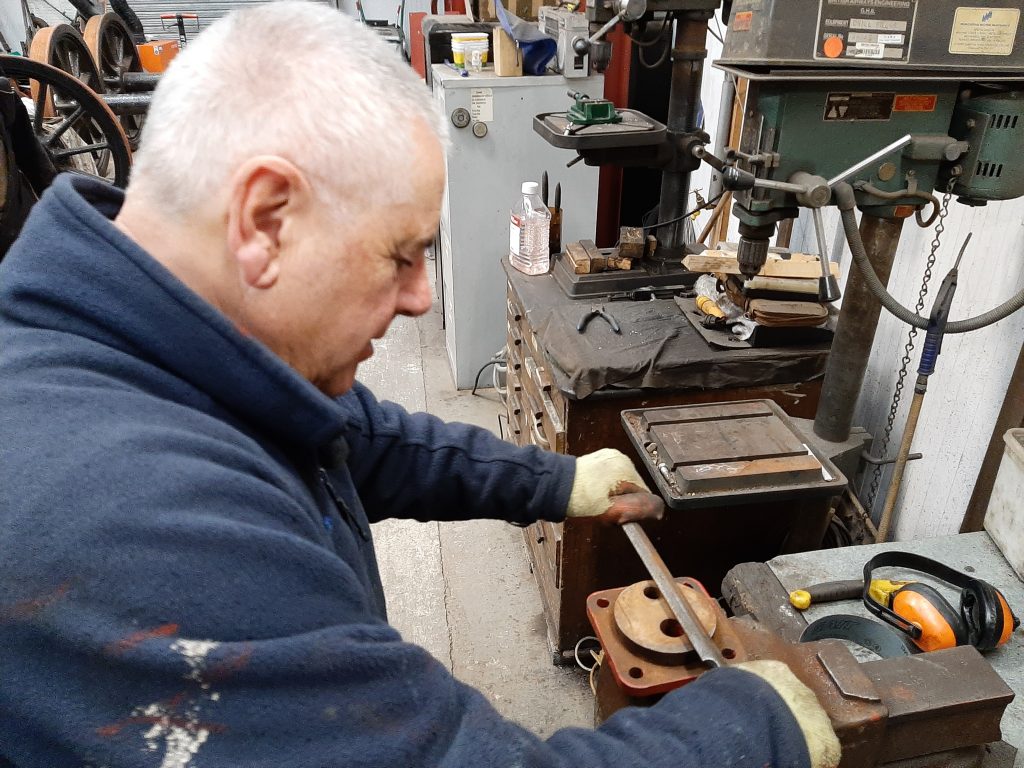 John Davis has been cleaning up the sand box outlet flanges.

The search for a replacement engine for Fluff continues and Nigel Harris kindly put out a plea on Twitter for people to let us know of any that might be available. One respondent helpfully suggested that we  look at barn sales for agricultural machinery that might possess a suitable Fowler Sanders engine, in particular a gyrotiller. Let us know if you see anything that might be of use… 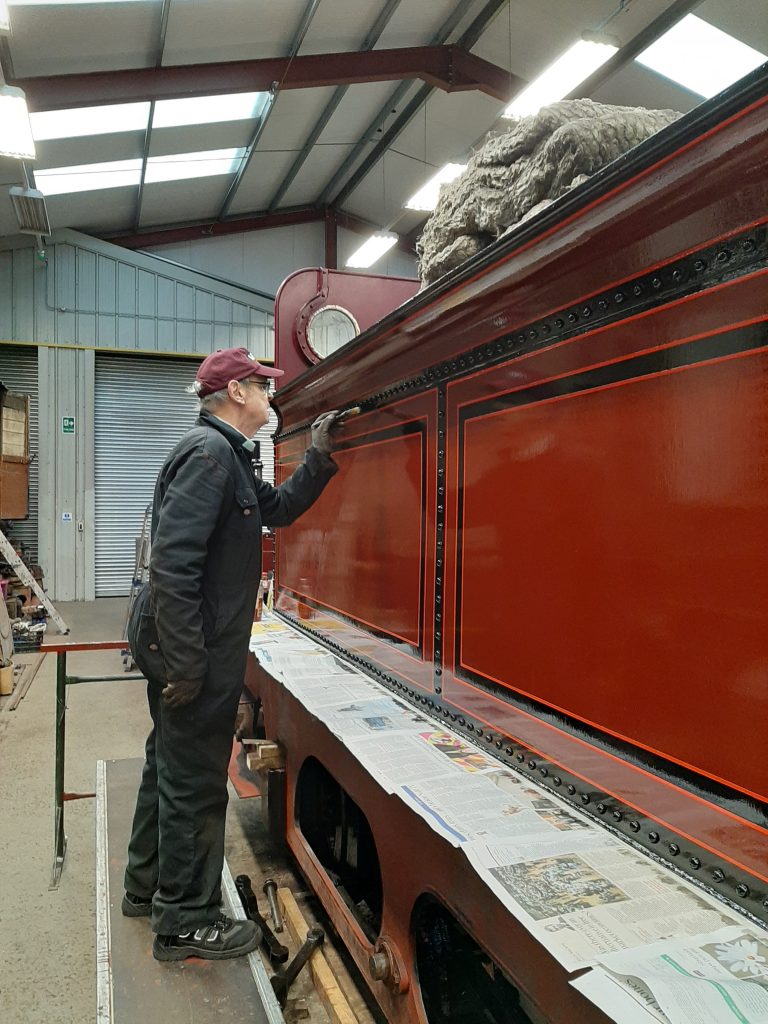 FR 20’s boiler is now ready to receive some water when we can get it close to the water pipe in the Ribble Rail shed. Tim and John Dixon varnished FR 20’s tender water tank on Friday and John is seen checking for any stray varnish dribbles from the many rivet heads, which are undoubtedly the bane of any painter’s life! 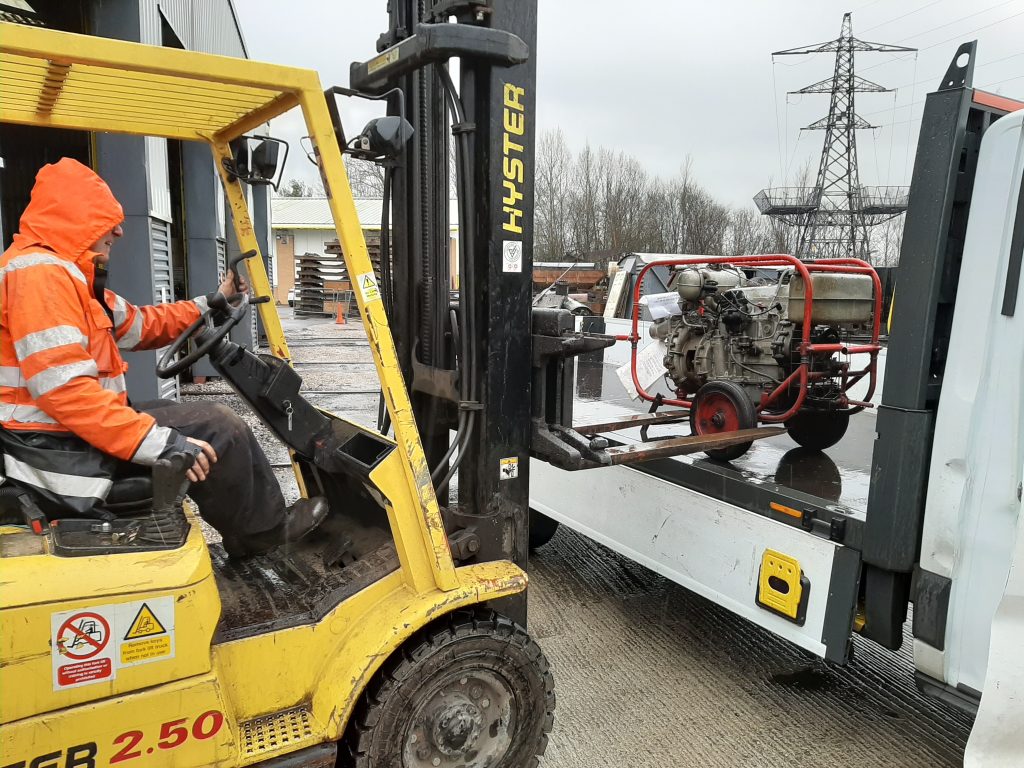 Wednesday saw Keith and Ade head off to Leyland to pick up the newly acquired fire pump and accessories. The RSR, which ran a half term steam service that day, had an overwhelming response from the public, so it took some time to find space for Ade to unload the kit with the forklift truck.

There is no news yet as to the date for 5643’s steam test at Embsay. Please note that there may not be a working party at Preston this Saturday as Keith is otherwise engaged on a steam trip. 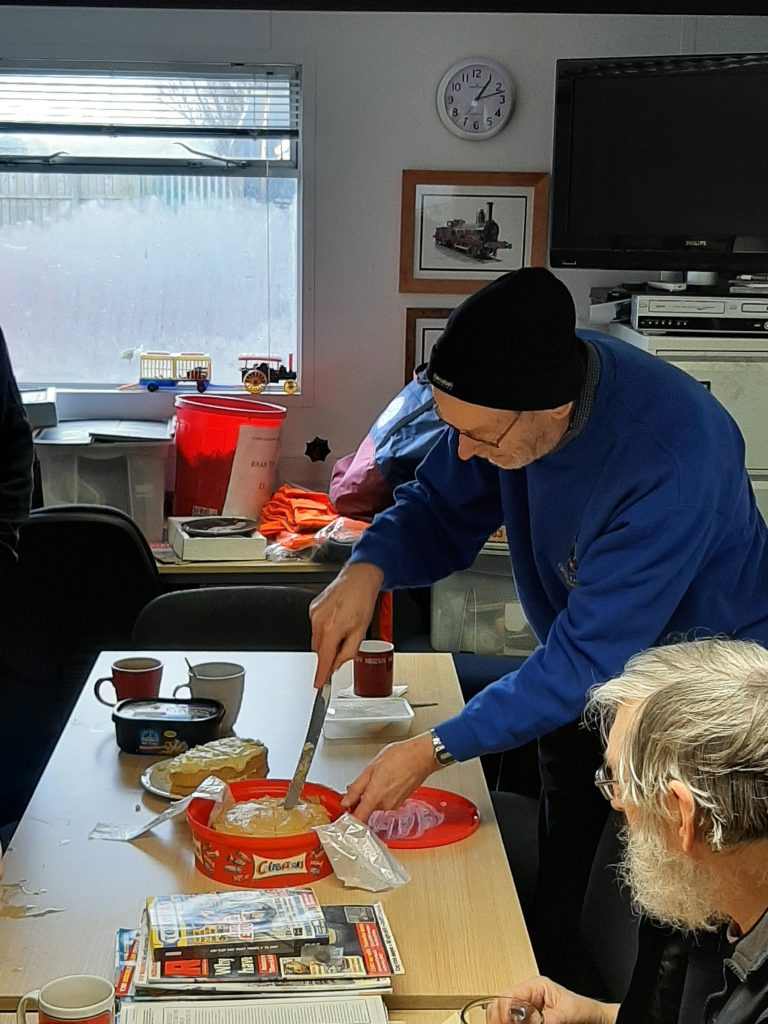 There seems to have been a spate of birthdays lately and Alison kindly provided celebratory cakes for Keith and Alan. David Rimmer is seen wielding a knife to one of them under Alan’s watchful eye. 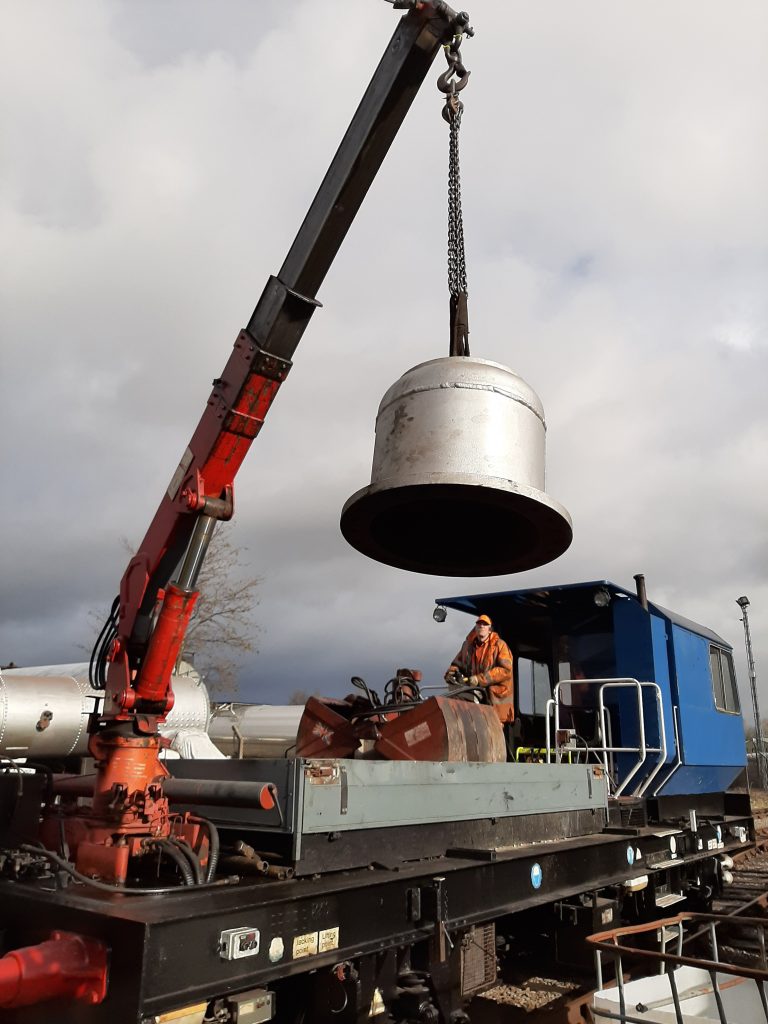 A landmark stage in the overhaul of FR 20 was achieved when the dome was finally lifted into position by the Ribble Steam Railway’s track maintenance vehicle’s hi-ab. 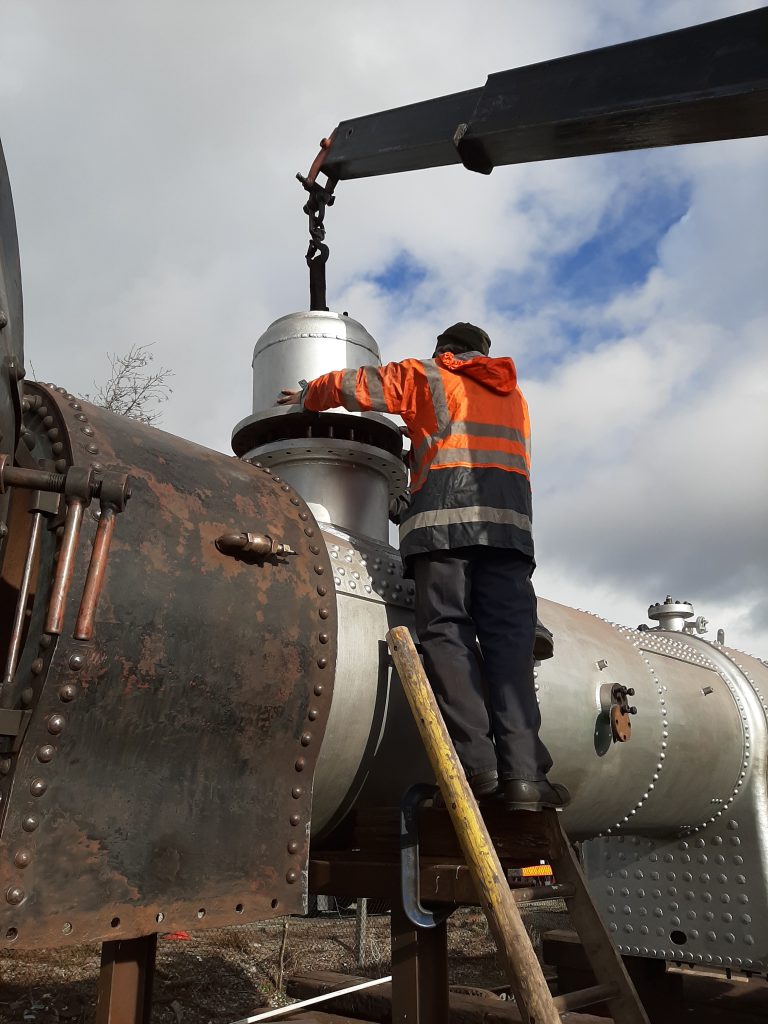 Ade is seen making sure that the dome fits neatly into position. 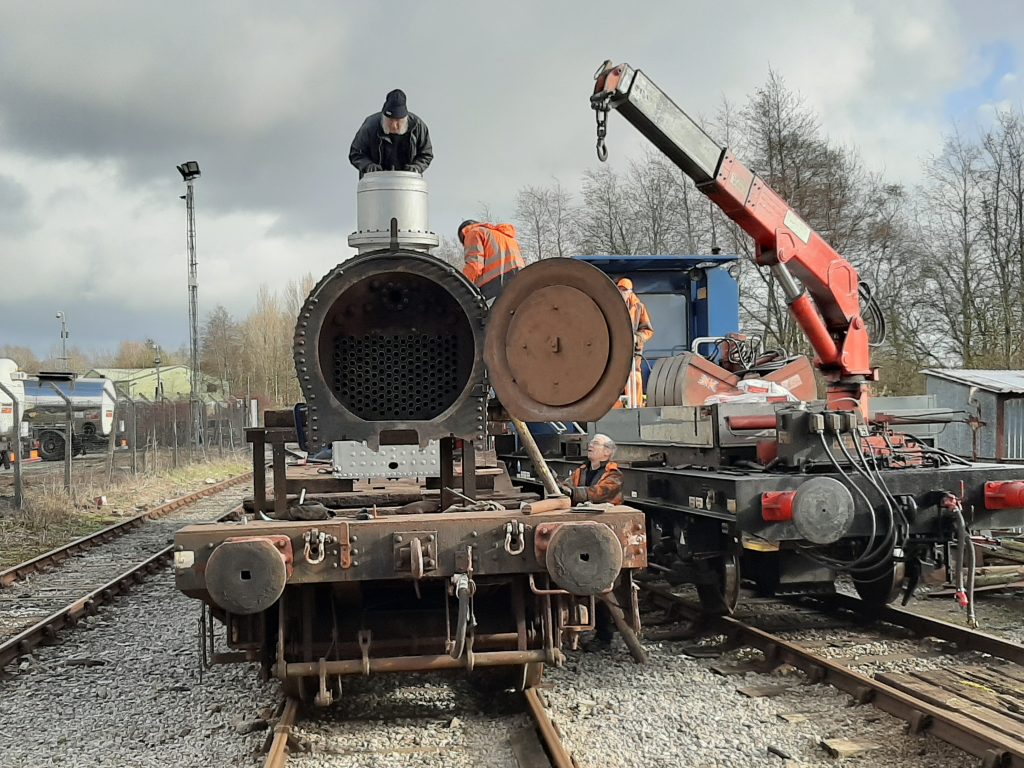 Alan looks as if he has just popped up out of the boiler as he attends to the securing nuts. 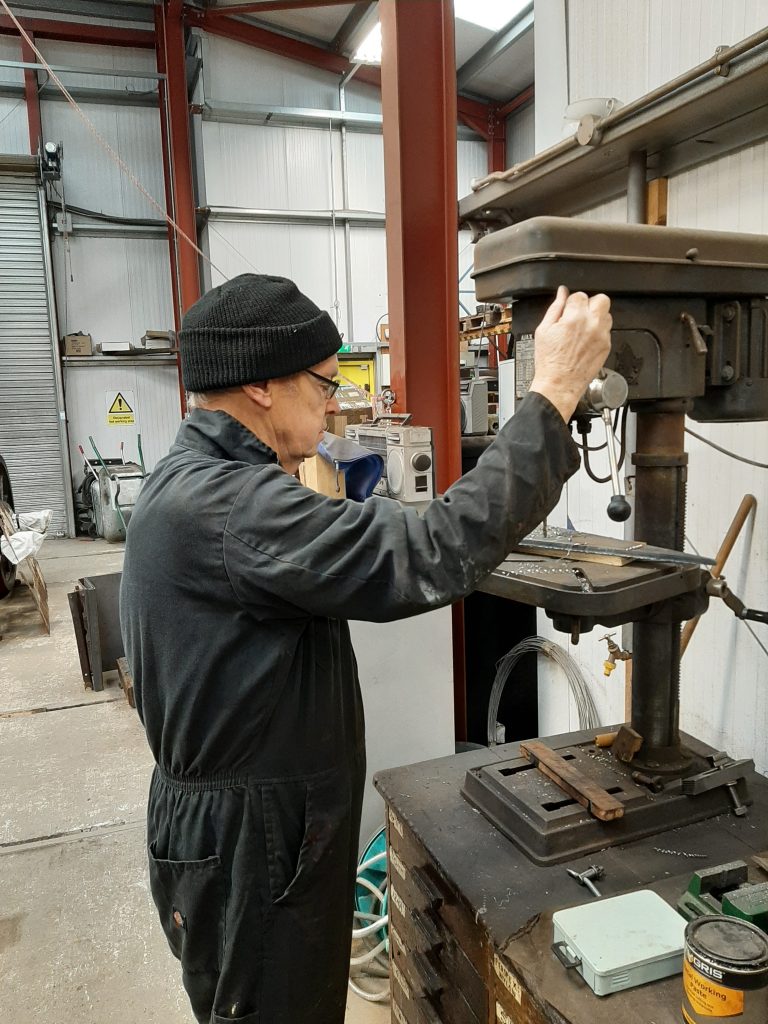 John has been preparing the last of the boiler blanks in readiness for some water to be put into the boiler. 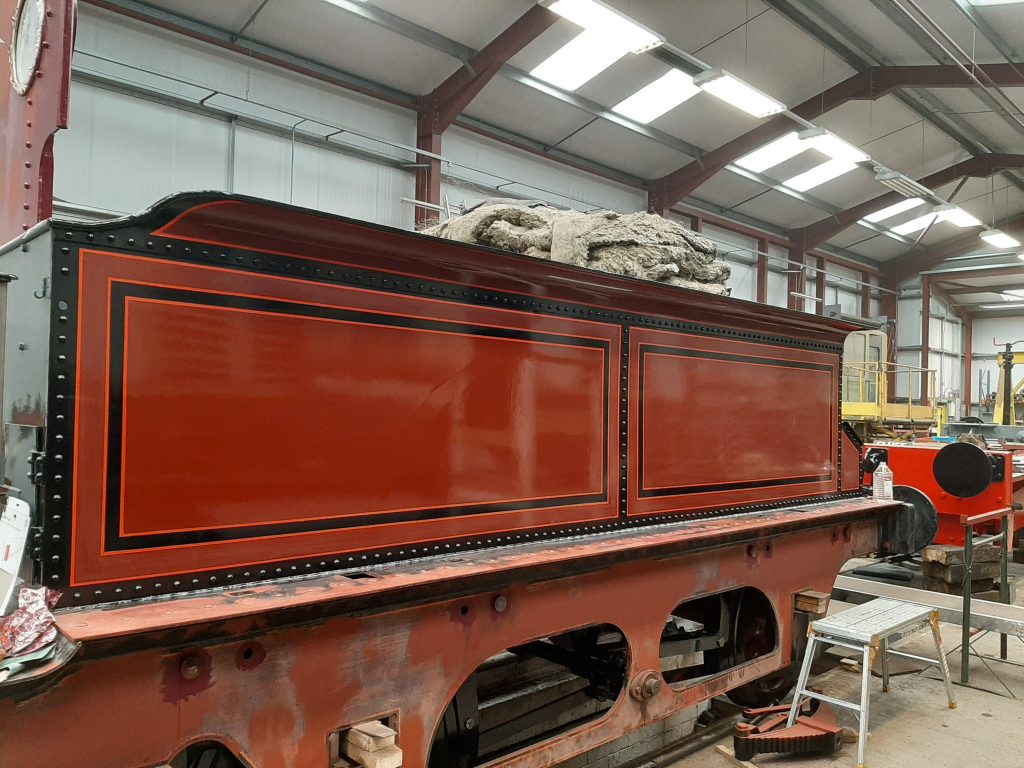 Painting of the tender has continued with the left hand side of the tank now showing off its new coat of paint. 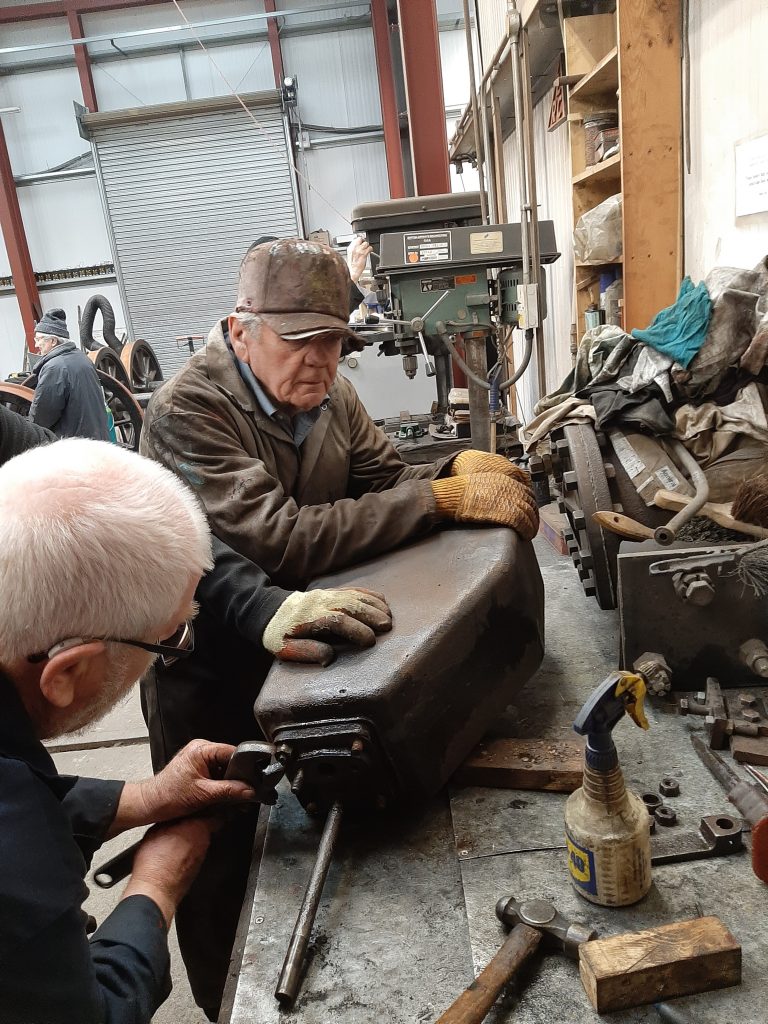 Fred and Alan Ogden have been wrestling to free the mechanism on the second of Fluff‘s sand boxes. 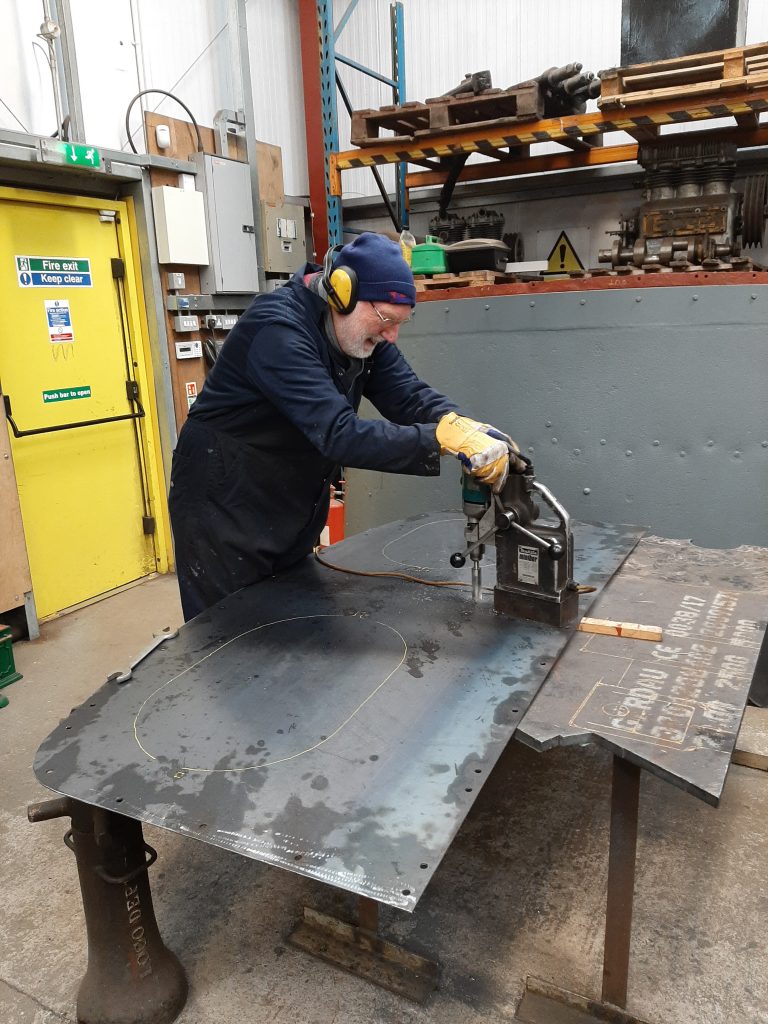 More new platework for Fluff‘s rear cab sheet has been cut out and Phil Bell has been drilling some more holes. 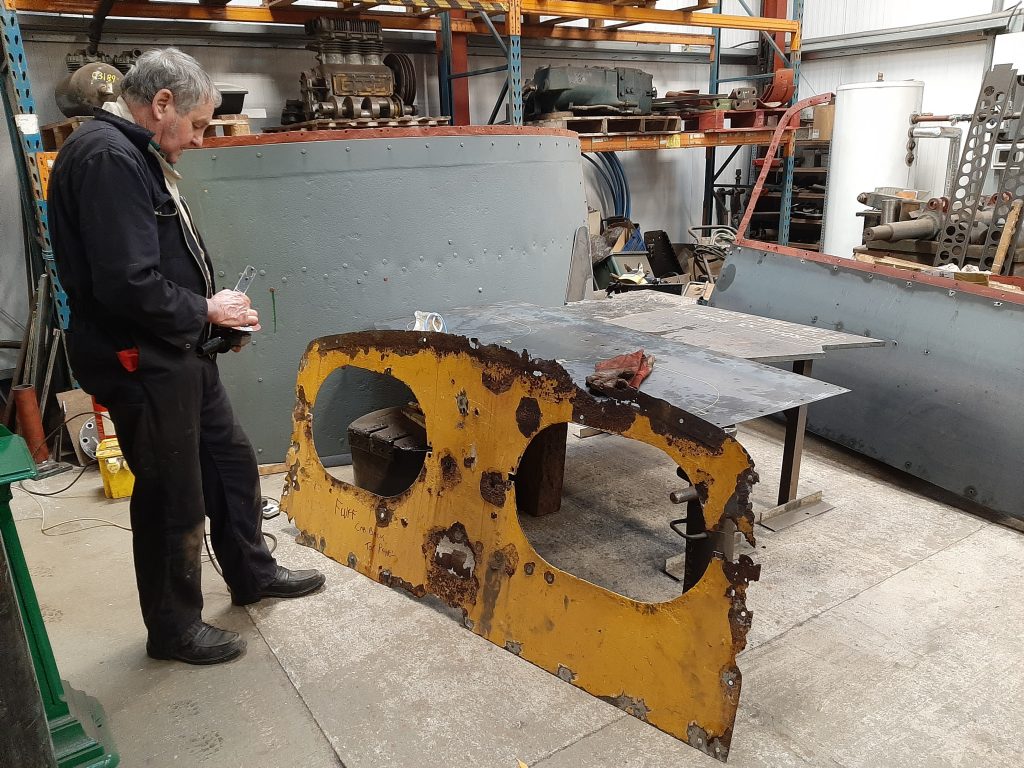 With the new steel cut, Keith prepares to chop the old cab plate ready for the skip.

Finally, the steam test for 5643, originally scheduled for last Friday, has been postponed pending the acquisition of some replacement firebars. Colleagues at Embsay have this is in hand and the steam test should be carried out shortly. 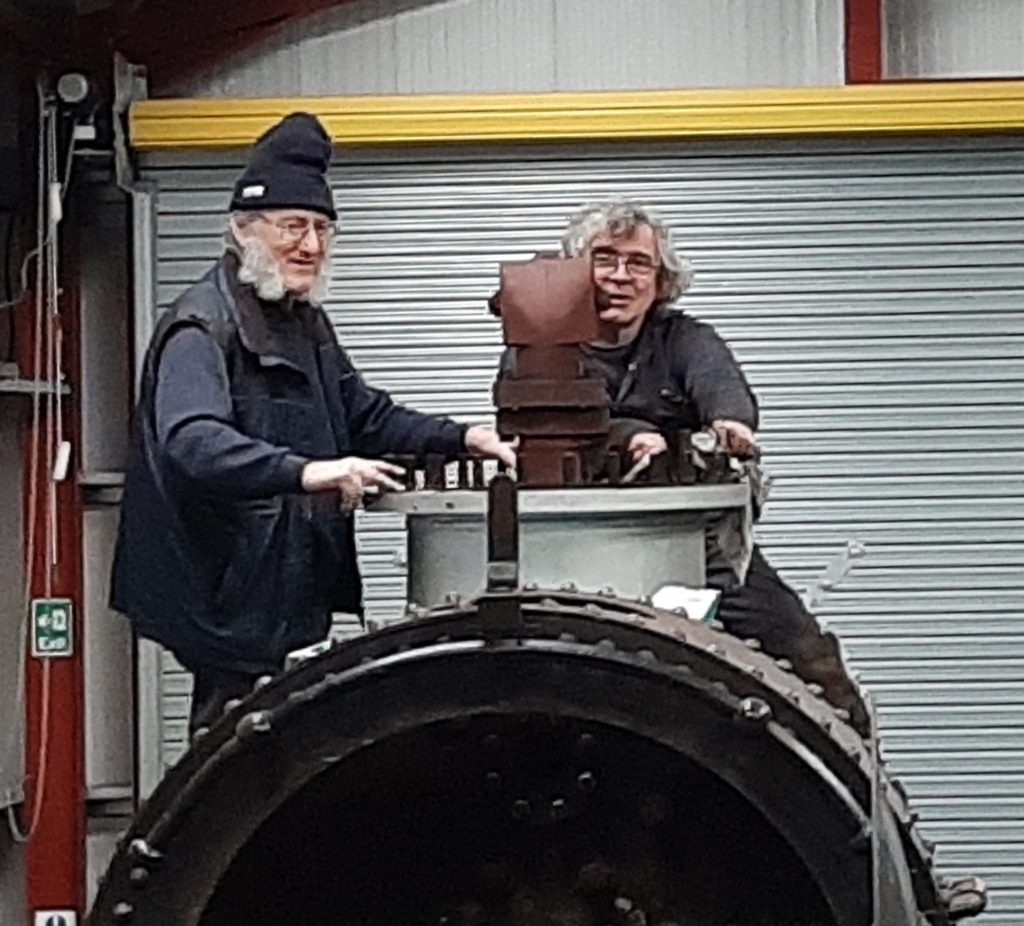 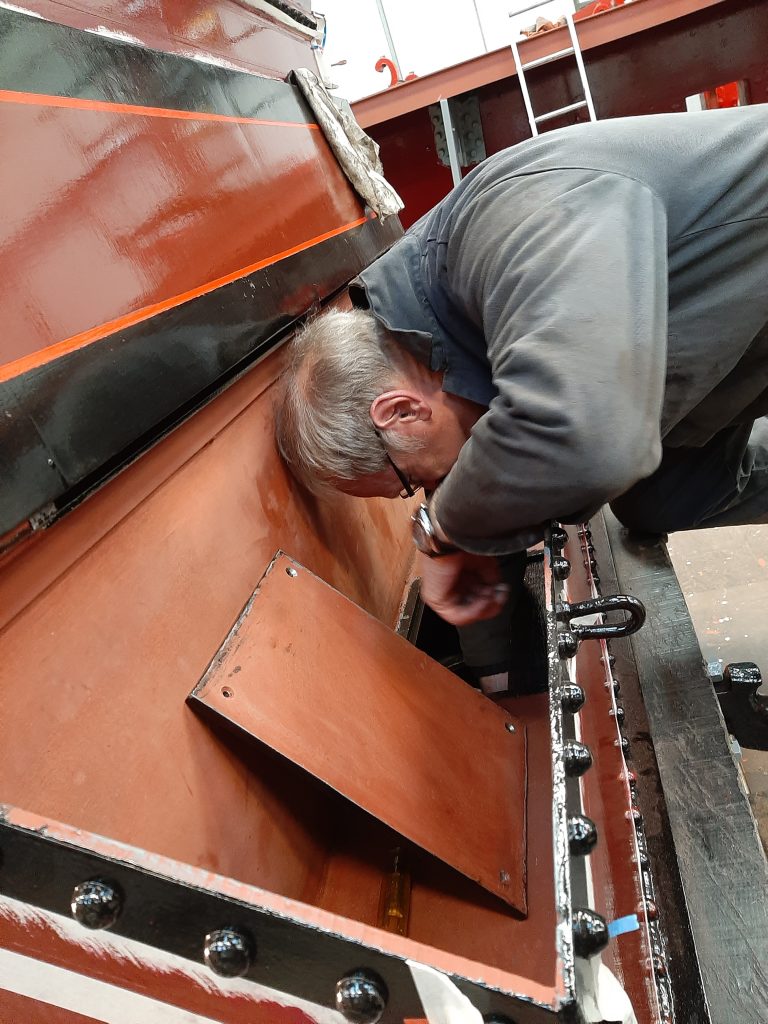 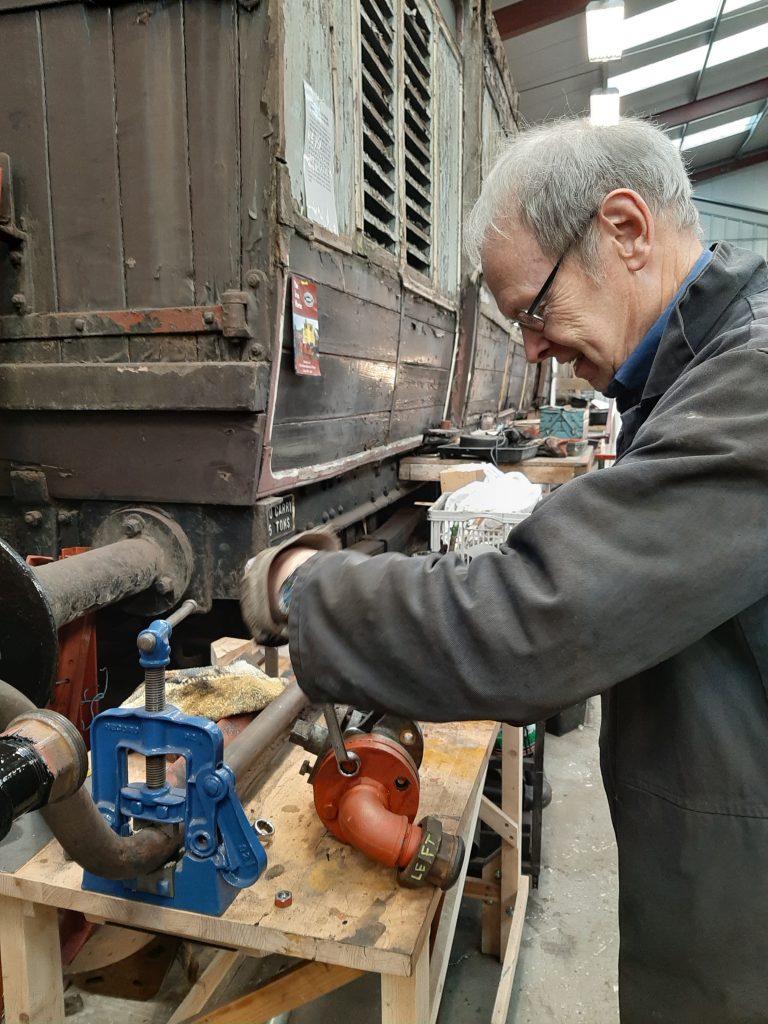 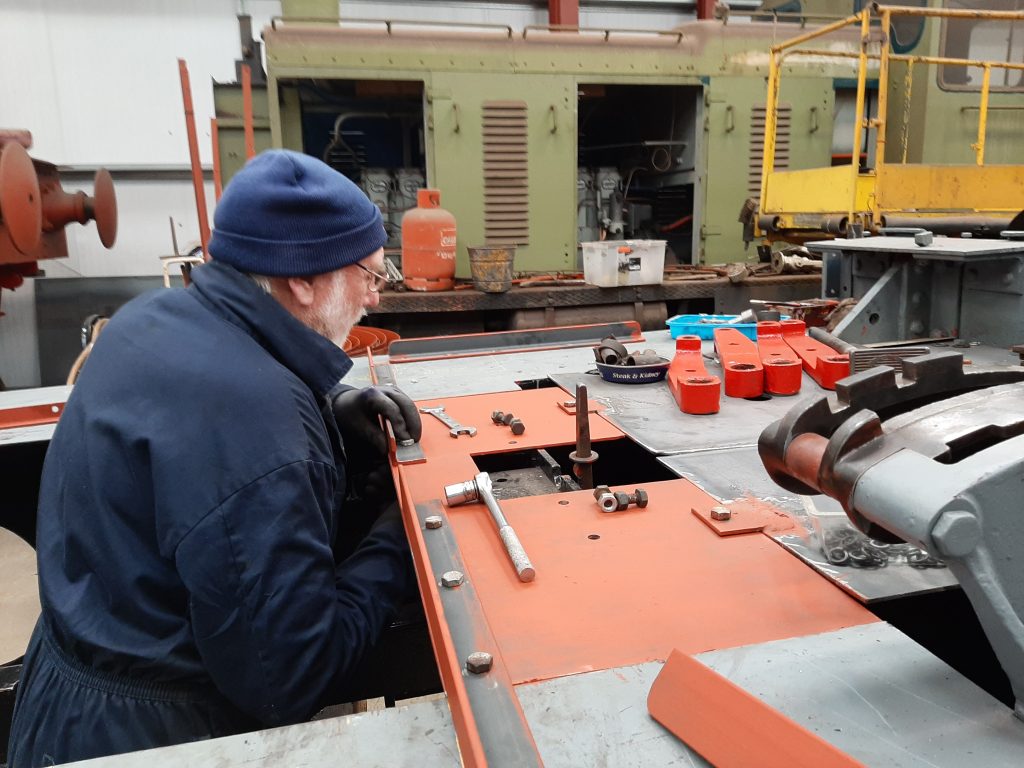 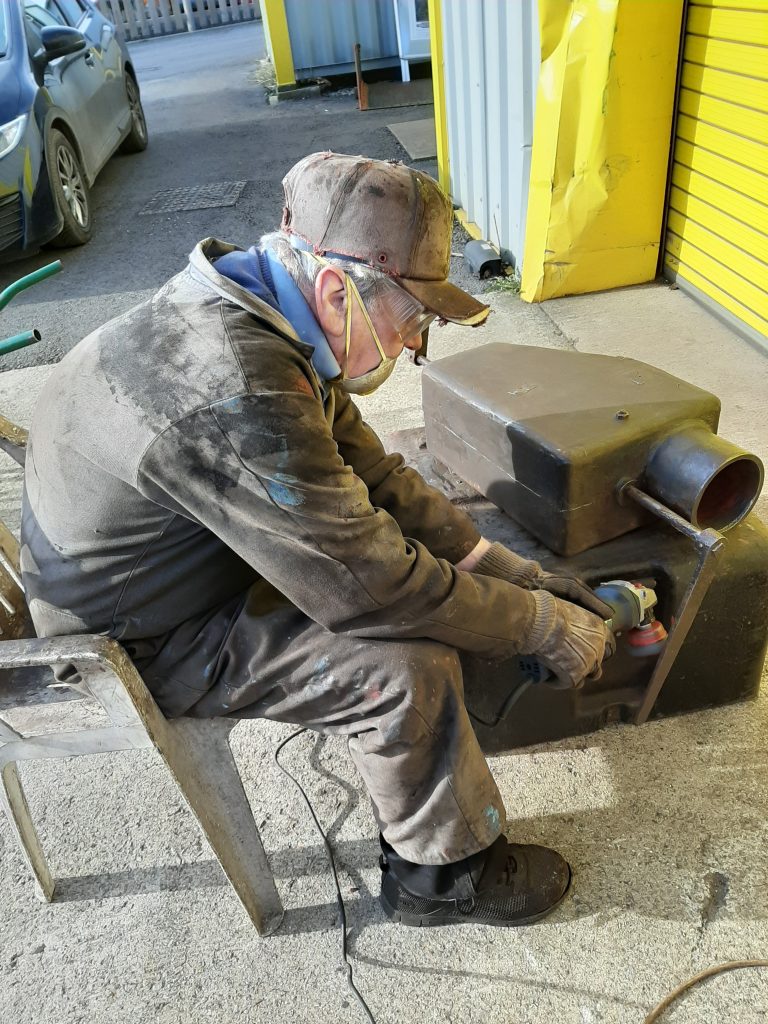 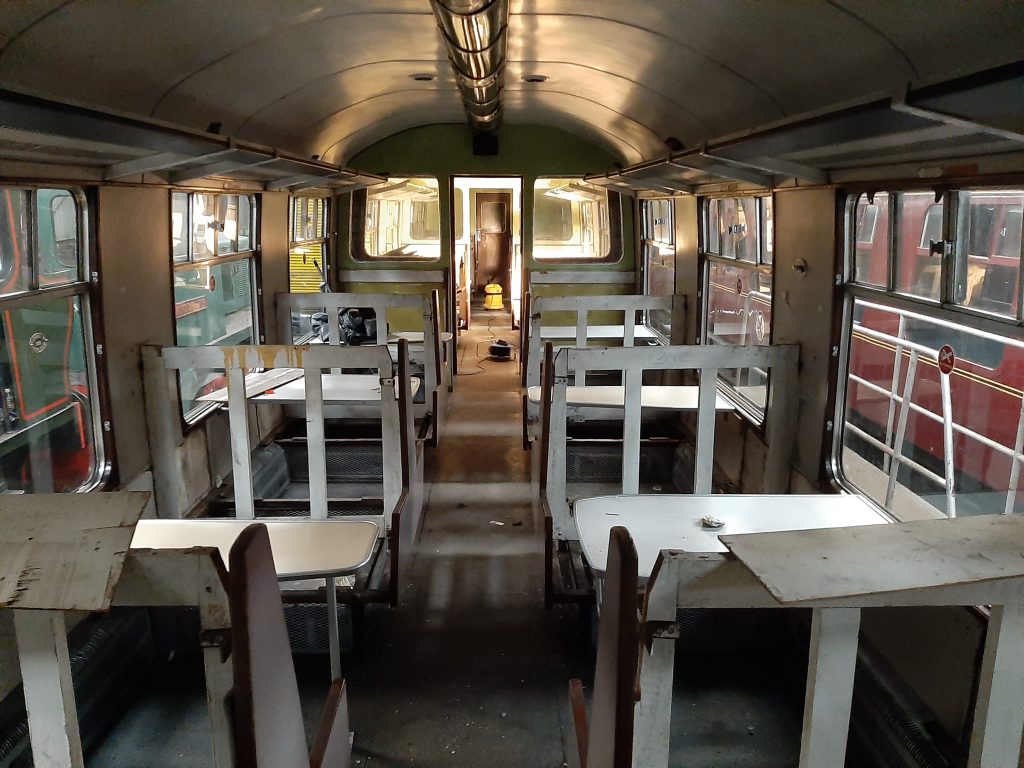 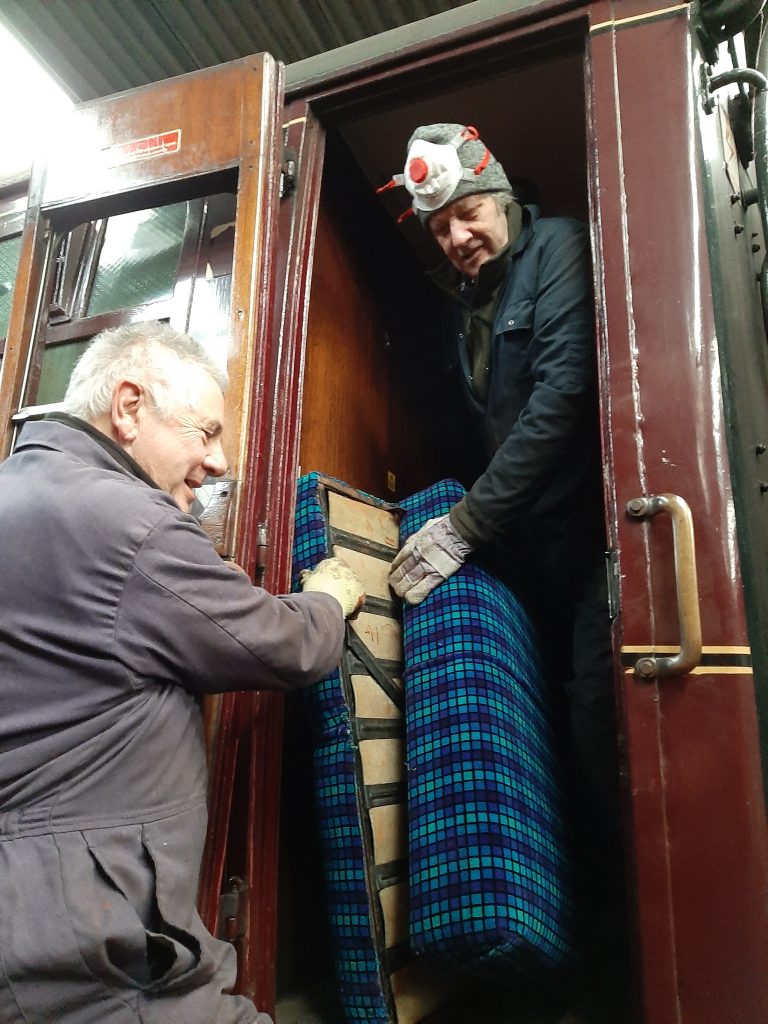 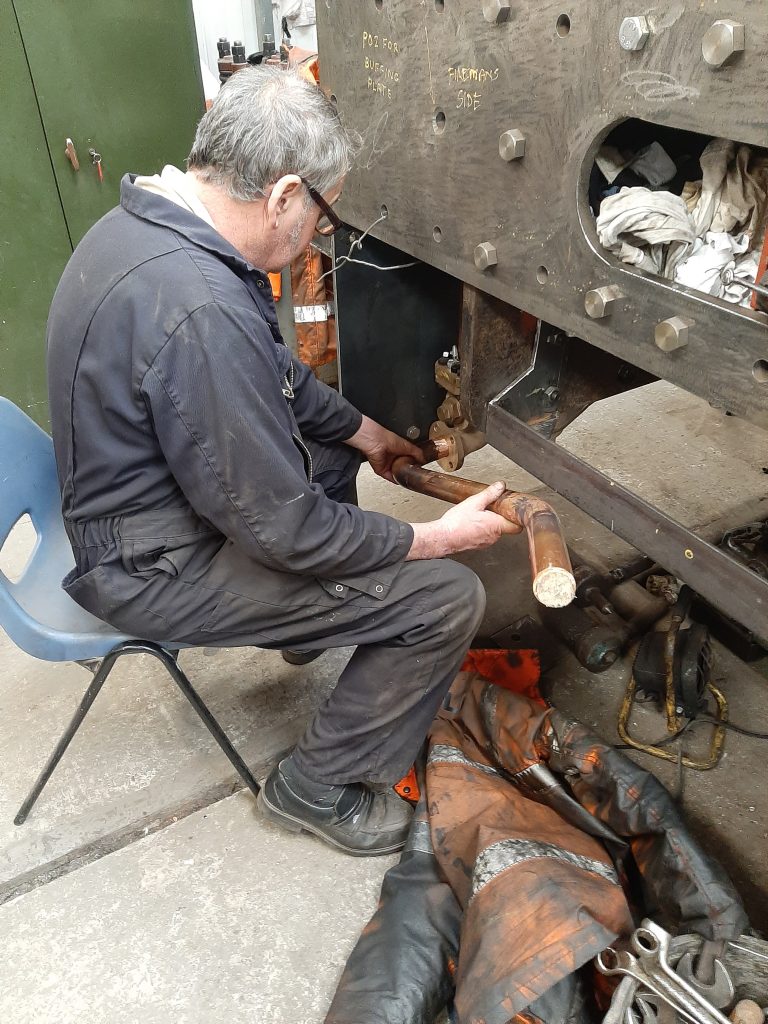 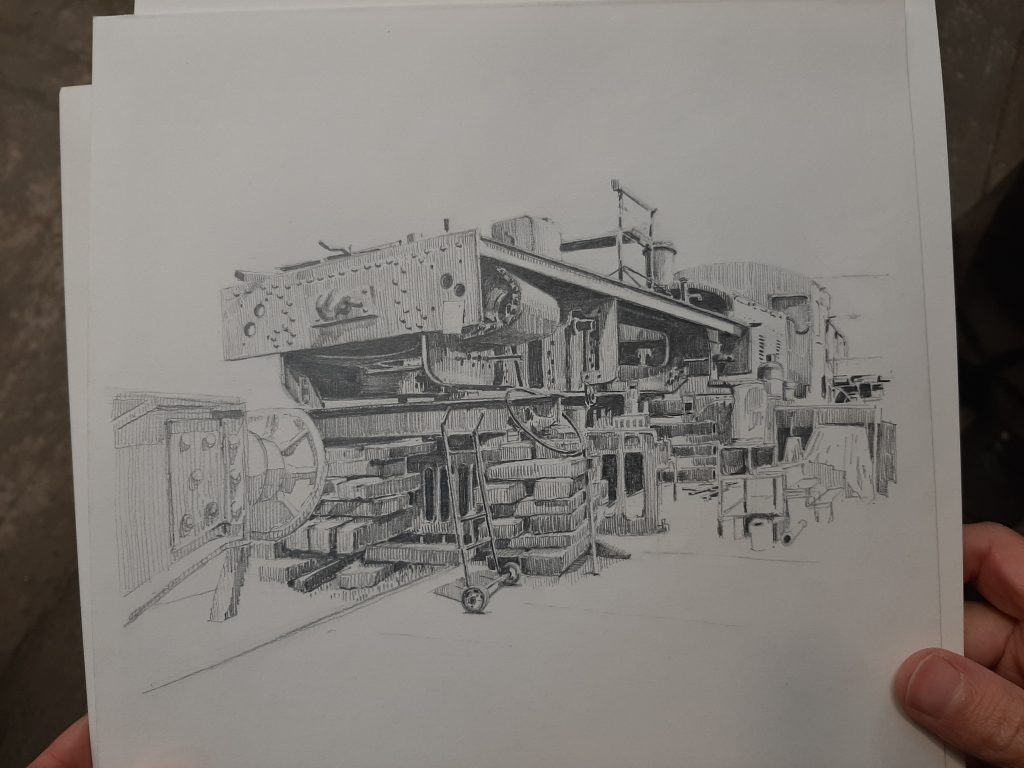 Work continues apace on the Trust’s projects at Preston. 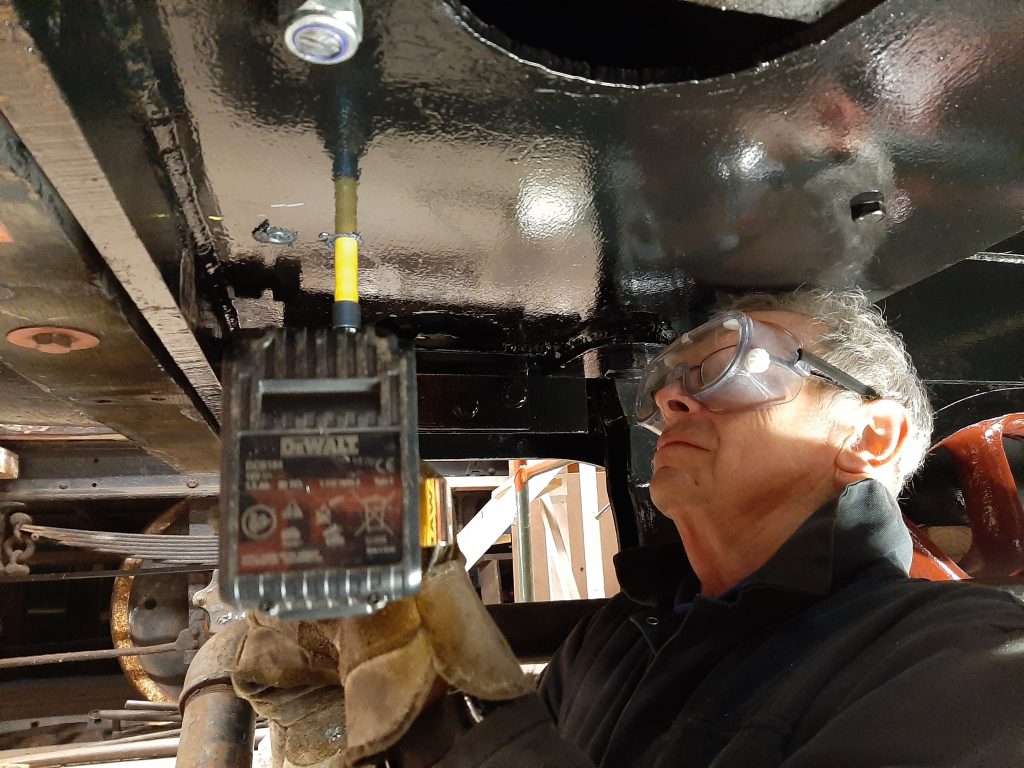 Underneath, John Dixon has been drilling holes to fix  the new vacuum pipe carrying brackets. 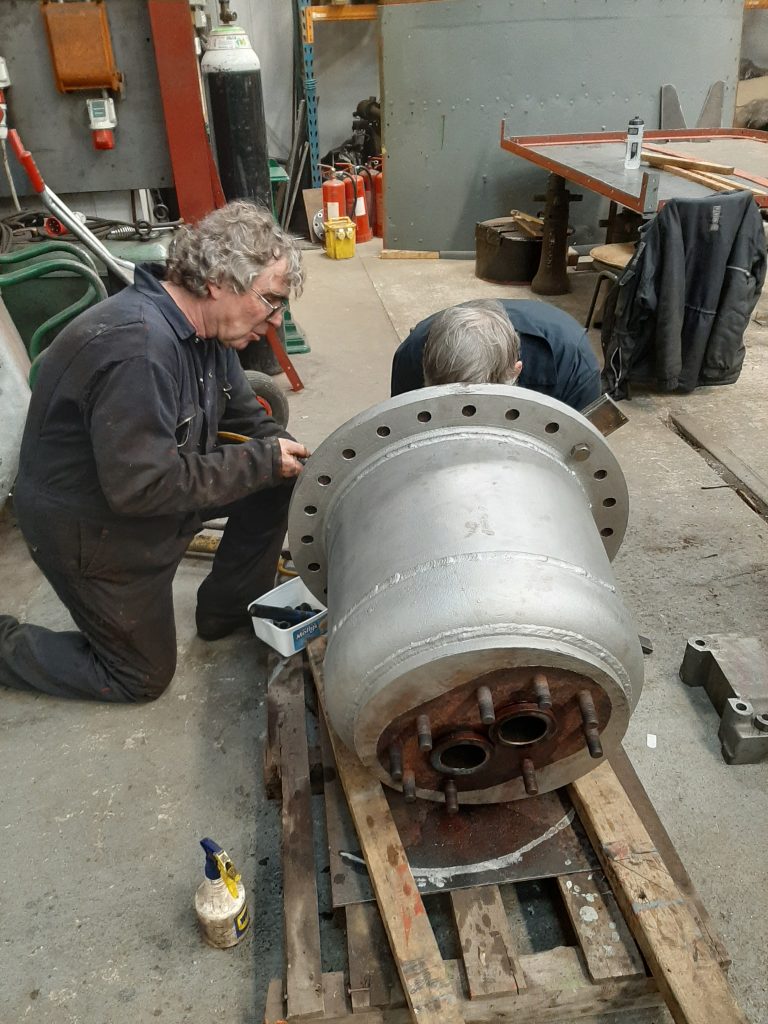 Ade and Alan spent some time on Wednesday removing the valve seats from FR 20’s dome for machining. The seats had previously been pressed into the dome so it took some persuasion to remove them, but with ace dismantler Ade to hand, we shouldn’t have worried! 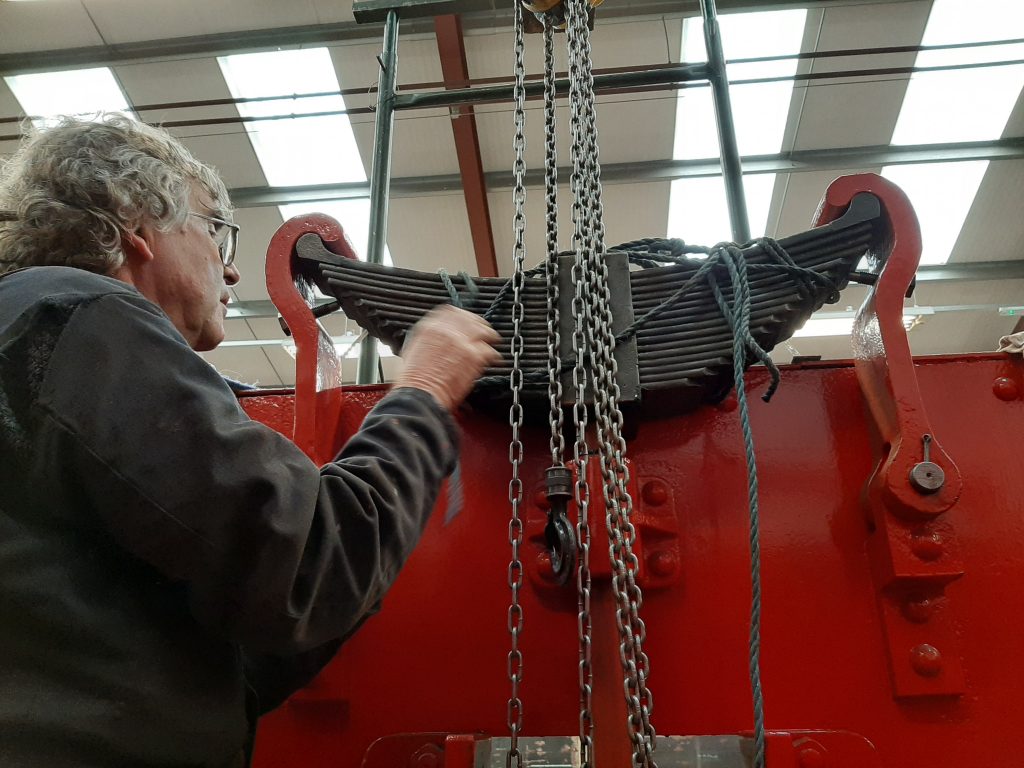 Just to demonstrate that dismantling isn’t Ade’s only talent, we include a welcome photo of him fitting one of Caliban‘s springs. 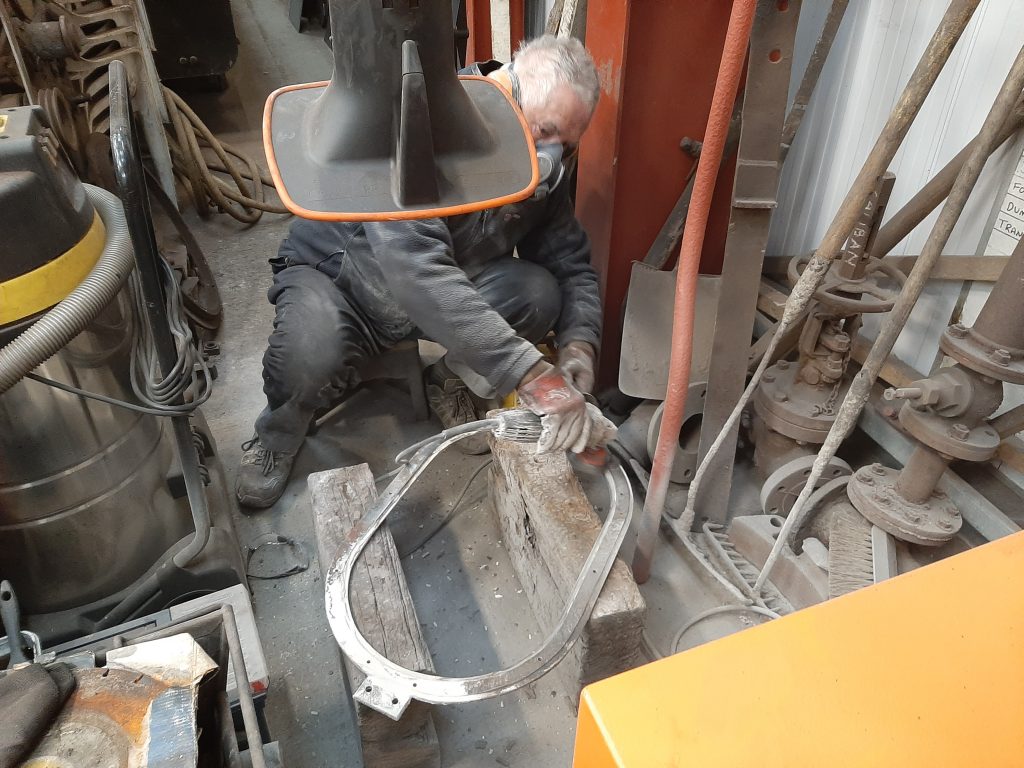 Work continues on Fluff and here we see John Davis cleaning up one of the window frames, with the trunk from ‘Nellie’ the fume extractor in close proximity. 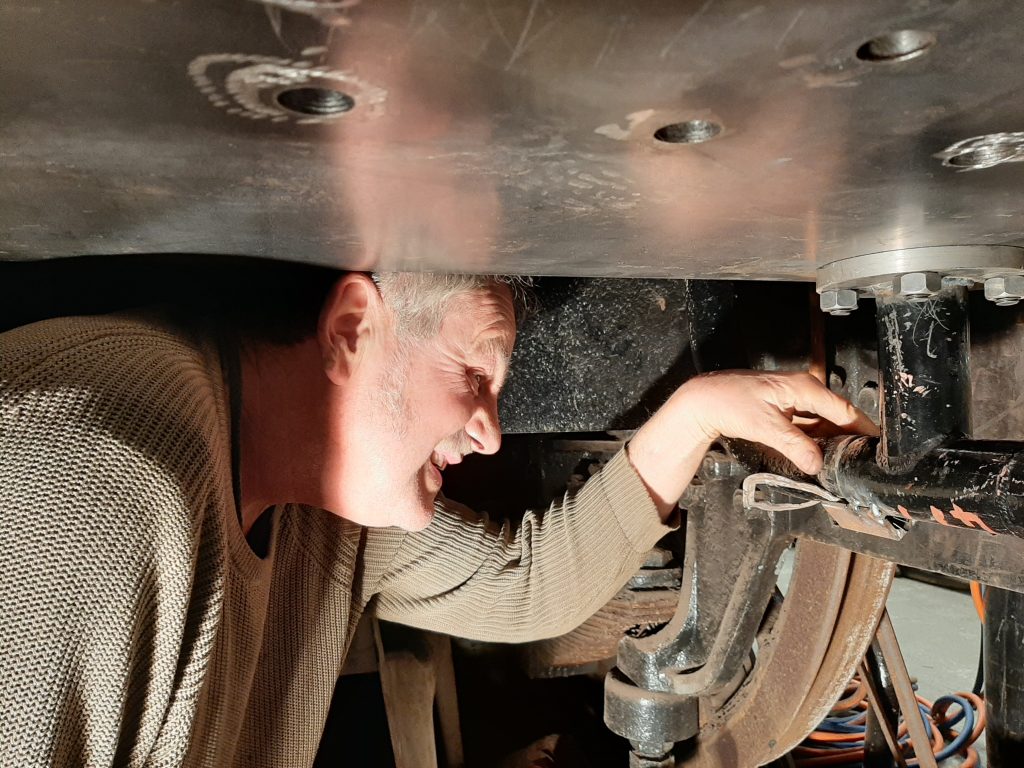 Keith has been busy fitting more pipework to Wootton Hall. He is seen here under the cab floor with the vacuum pipe that links the brake valve to the tender vacuum cylinder.

Finally, the NDT examination of 5643’s tubeplate was carried out last Wednesday and, at the time of writing, we await the boiler surveyor’s prognosis.