Just like the dustbin collections, the blog has been delayed this week by a day owing to the Bank Holiday…

John D started to compile his snagging list for the interior of the RMB and searched for various missing bits of wood to complete repairs. 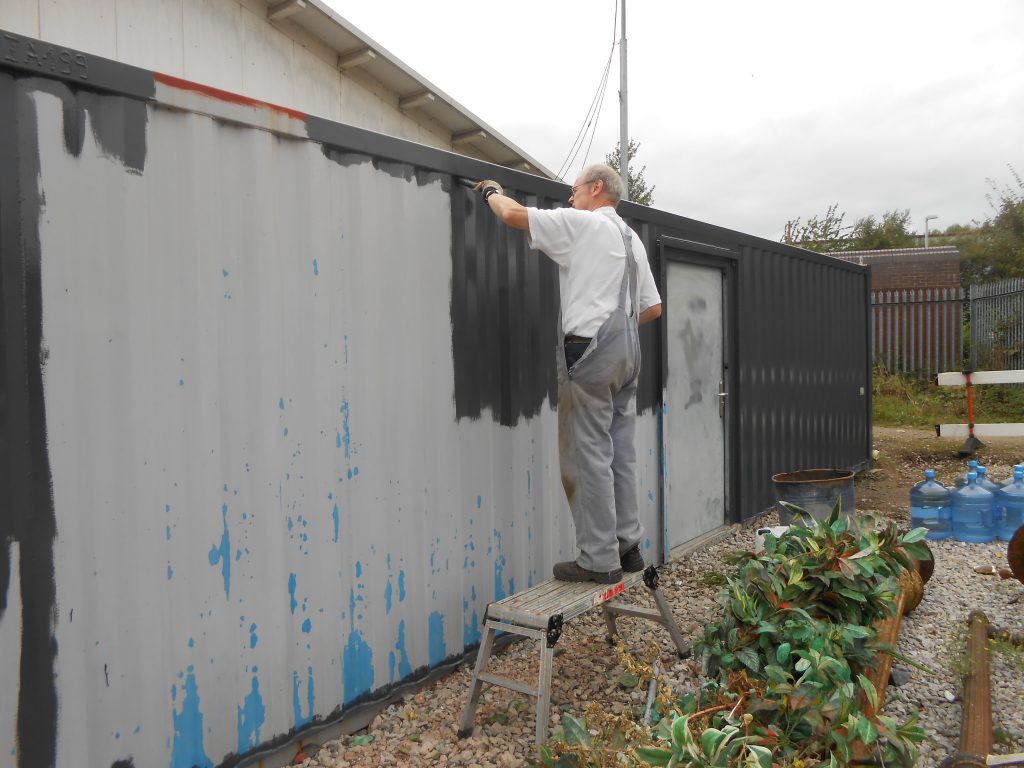 He then joined Tim on Friday to complete the rub down on the east facing wall of the new cabin and to apply a layer of dark grey undercoat. 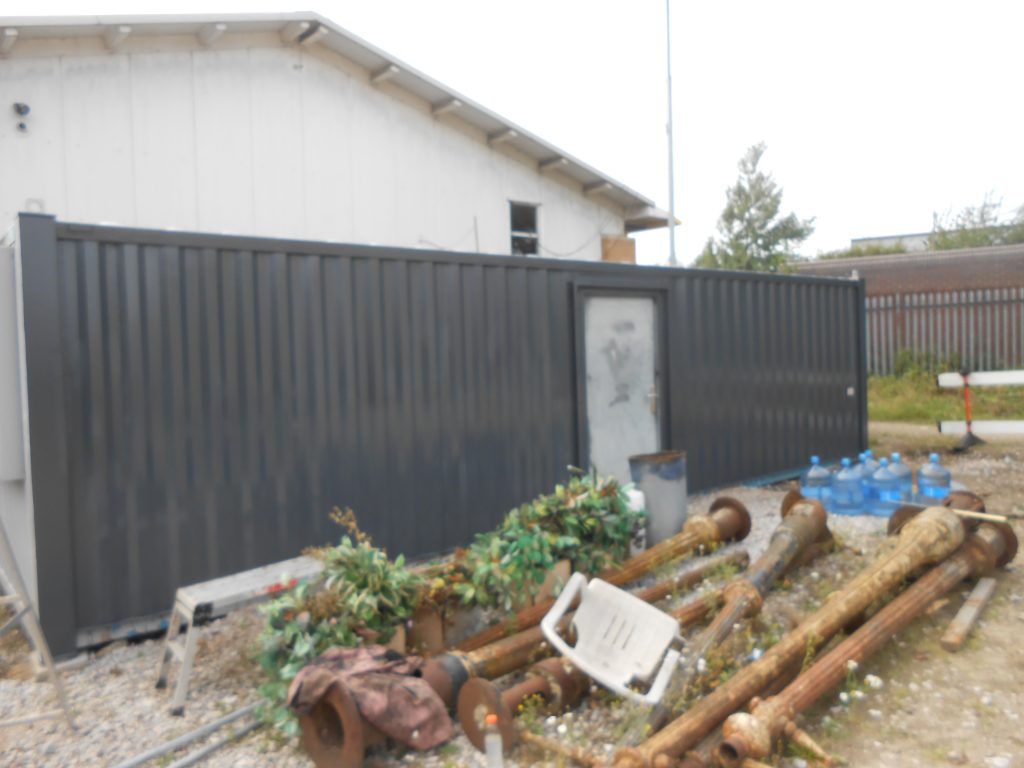 It is hoped to be able to put on the top coat this next Wednesday, which should match the RMB’s roof colour. David came in on Saturday to clear away the stones and earth from around the bottom of the cabin to allow access.

Mike and Paul fitted extracted some stubborn broken screws from the servery area foot rest and then fitted it along with the table. It’s all beginning to look very smart. 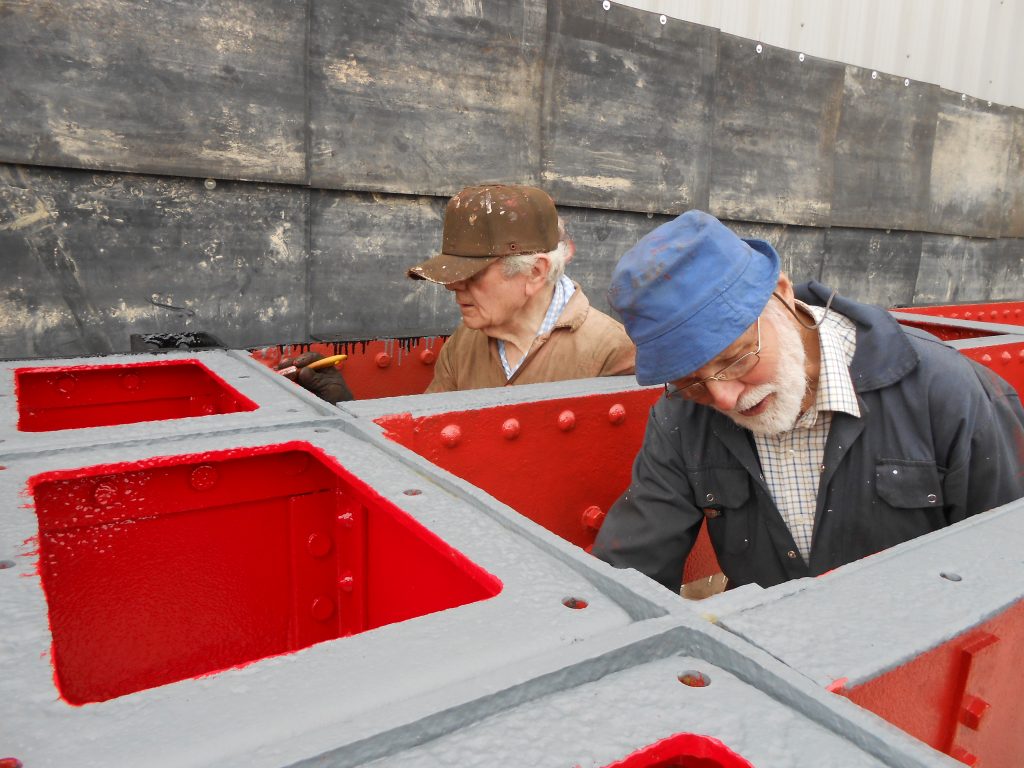 Fred and Roger have been hard at it with paint brushes again on the tender frames. 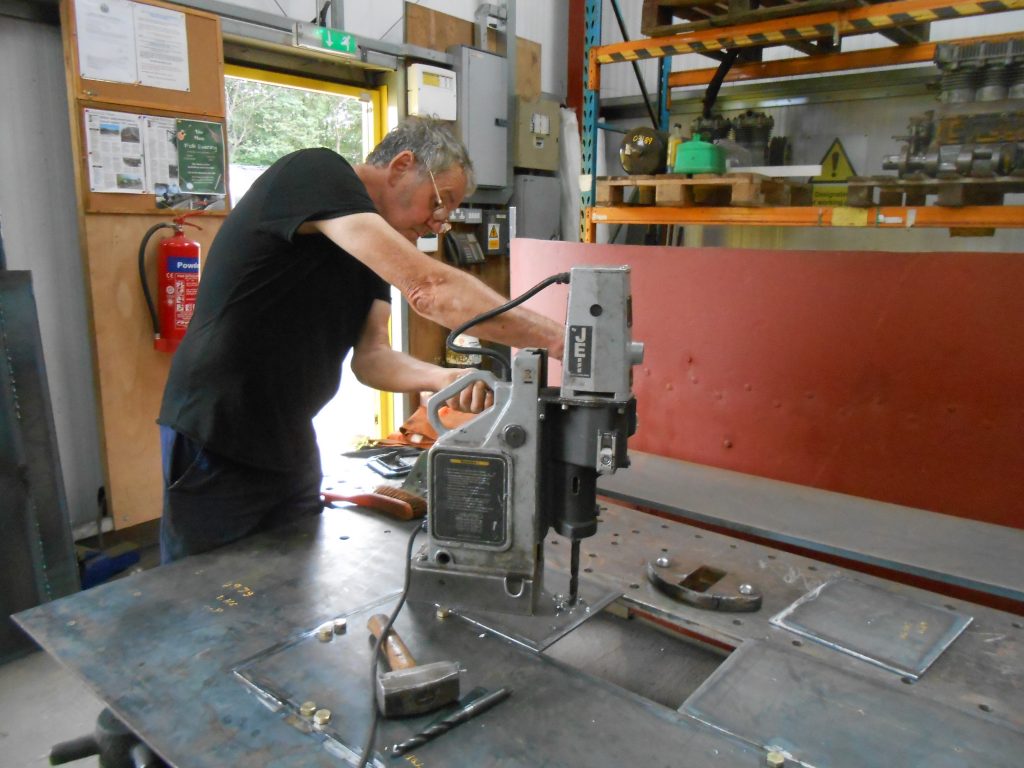 Keith, meanwhile has been drilling more holes in the new running plate for Wootton Hall.

The 14 month boiler certificate for 5643 has now expired so Keith is looking to form a working party for next weekend to start on the necessary work to enable it to gain a new certificate. Please let Keith know if you are available to lend a hand.

Finally, Alan and Alison have gone off on a short break to Cromer and called in at Shackerstone on Sunday for a ride behind Cumbria. 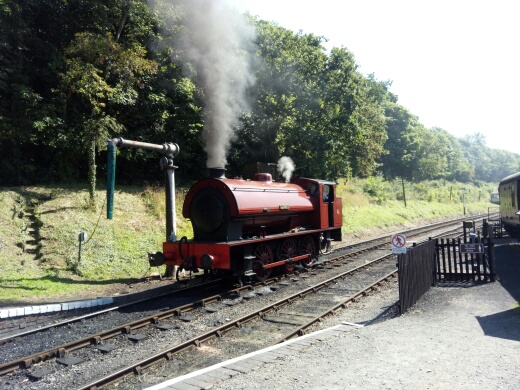 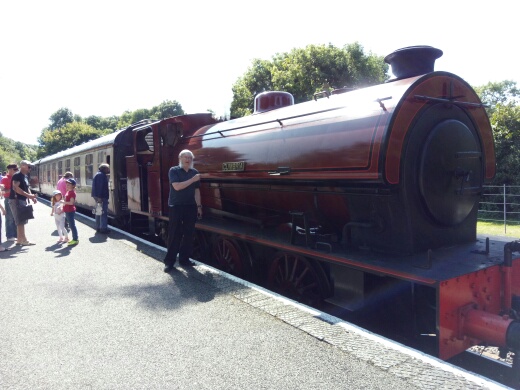 They also visited Rocks by Rail for a ride in the FRT’s LMS brake van.

Another inter-holiday news burst for you before things get back to normal…!

We are sorry to have to start by recording the passing of Jim Jackson (“Captain Birdseye” to some), former skipper of the MV Teal on Windermere who died at St Mary’s Hospice, Ulverston, on the 27th July at the age of 88. Jim served on the Windermere steamers for 42 years, following his father, also Jim, into the business. Those crewing trains on the L&HR could always expect a wave from the bridge from Jim followed, perhaps, by a pithy comment which kept you on your toes. Jim married Pam, who worked on the admin side of the steamer operation, and they lived at Railway Cottages, Newby Bridge, Jim’s home since the age of four. Our thoughts are with Pam and family at this sad time. 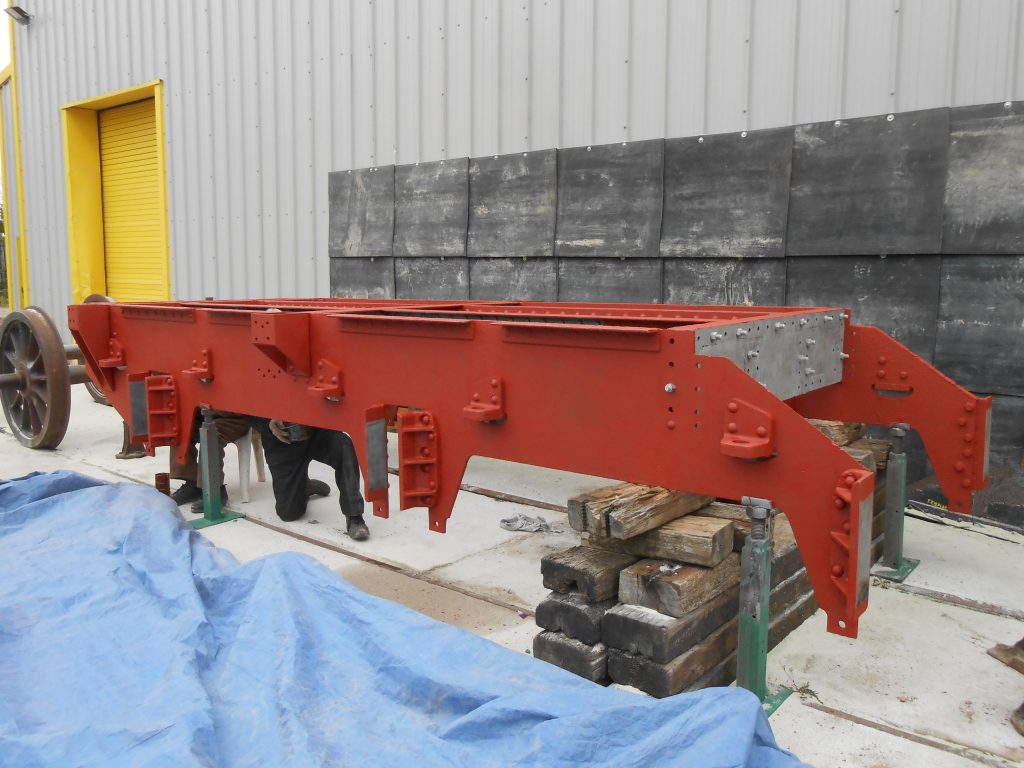 There has again been more progress at Preston, the highlight being the shot blasting of the tender frames, which have now also been primed, with most available working members lending a hand with the paint brush. 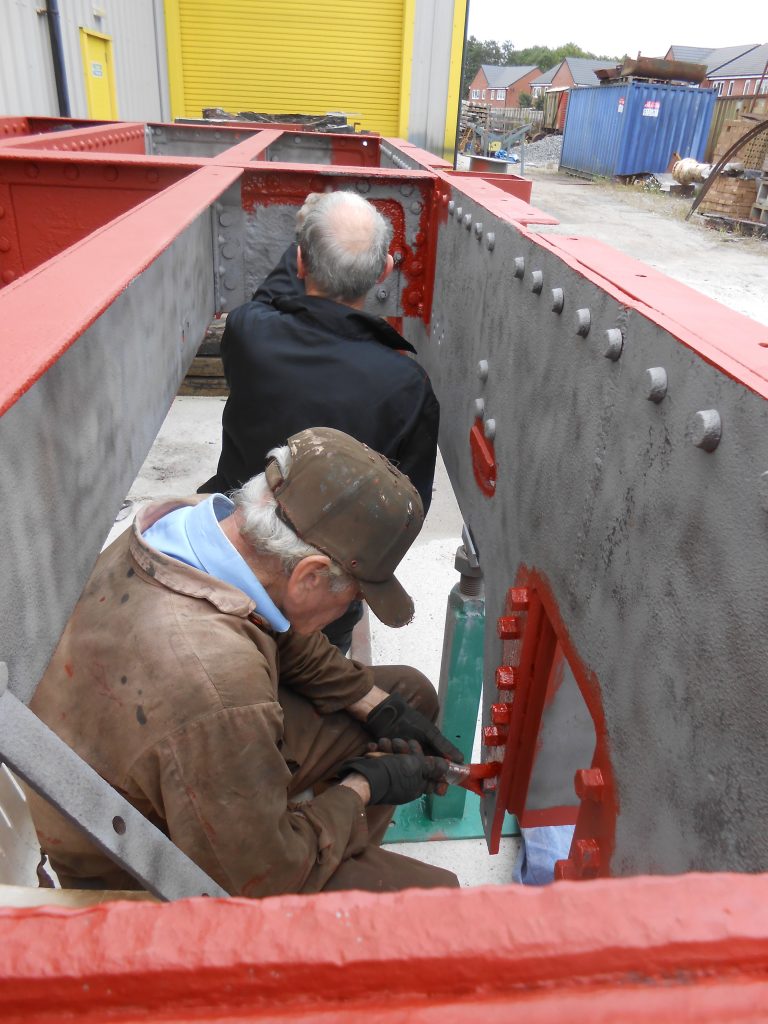 The frames are now in the process of receiving undercoat paint. 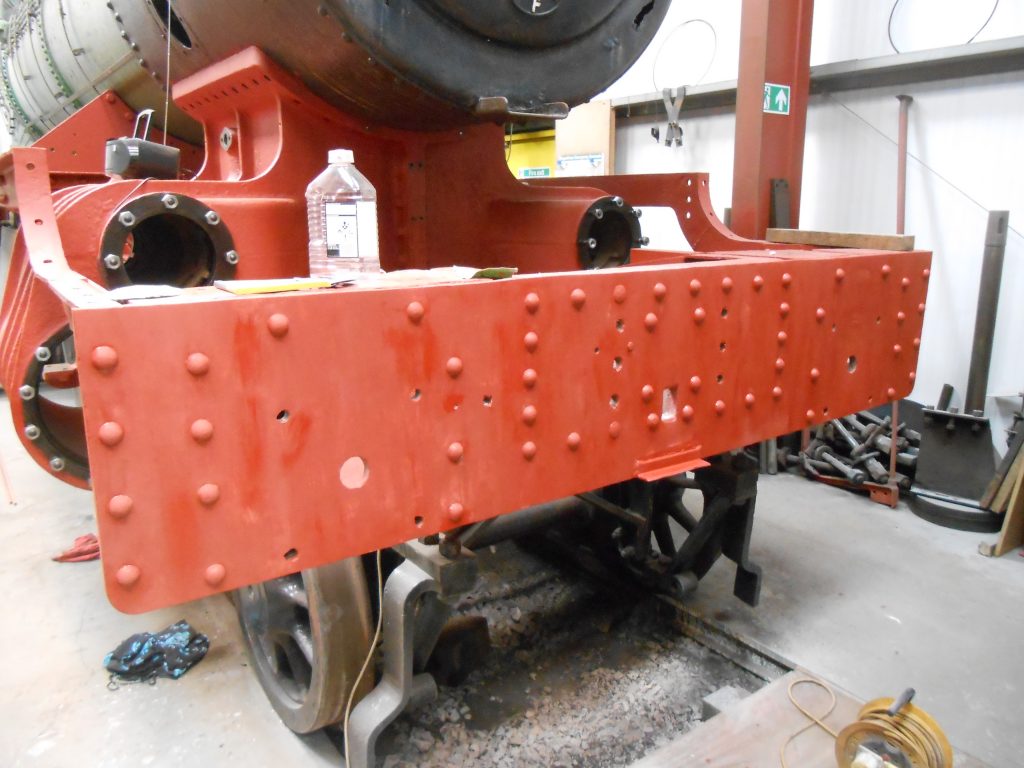 Work has also continued on Wootton Hall‘s engine, with more of the replacement metal for the running board being cut and the buffer beam being filled, sanded and primed; the latter will enable the buffers to be bolted on again. And Matt has been busy making new nuts for the cylinder and valve studs. 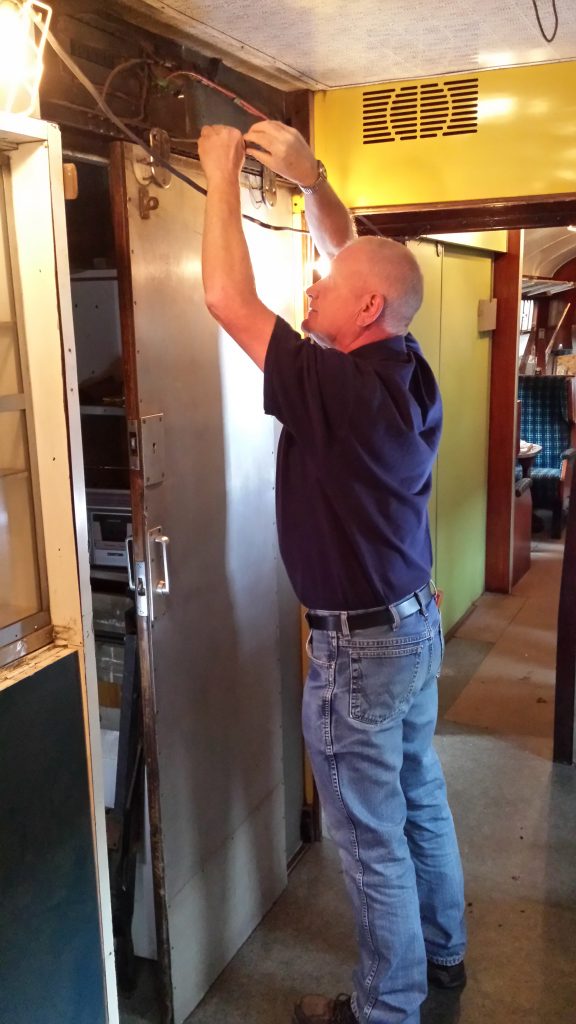 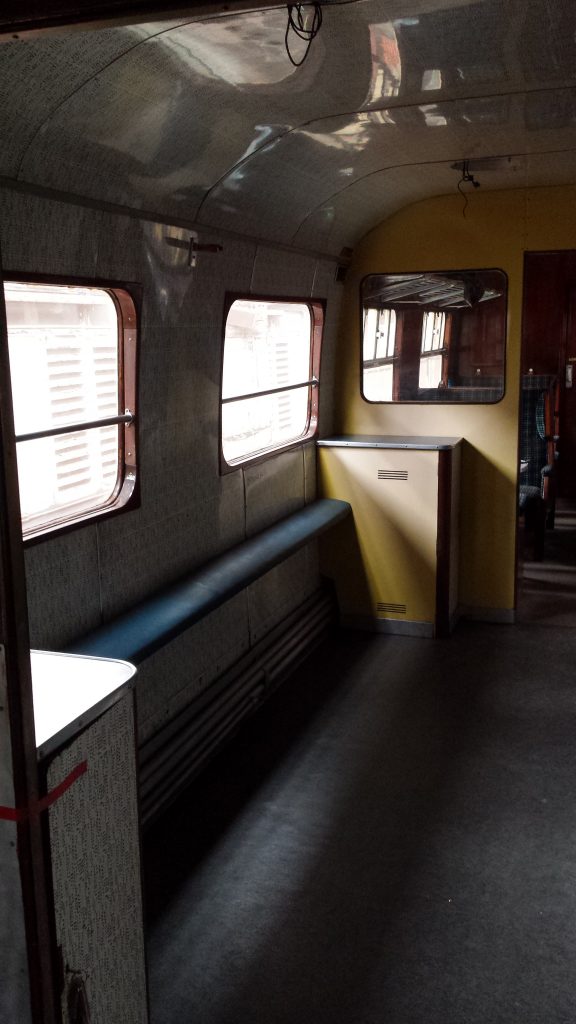 The RMB, lino laying now completed, has received further attention from Mike and Paul who have re-installed the buffet sliding door and the cupboards and “bum rest” in the servery area. 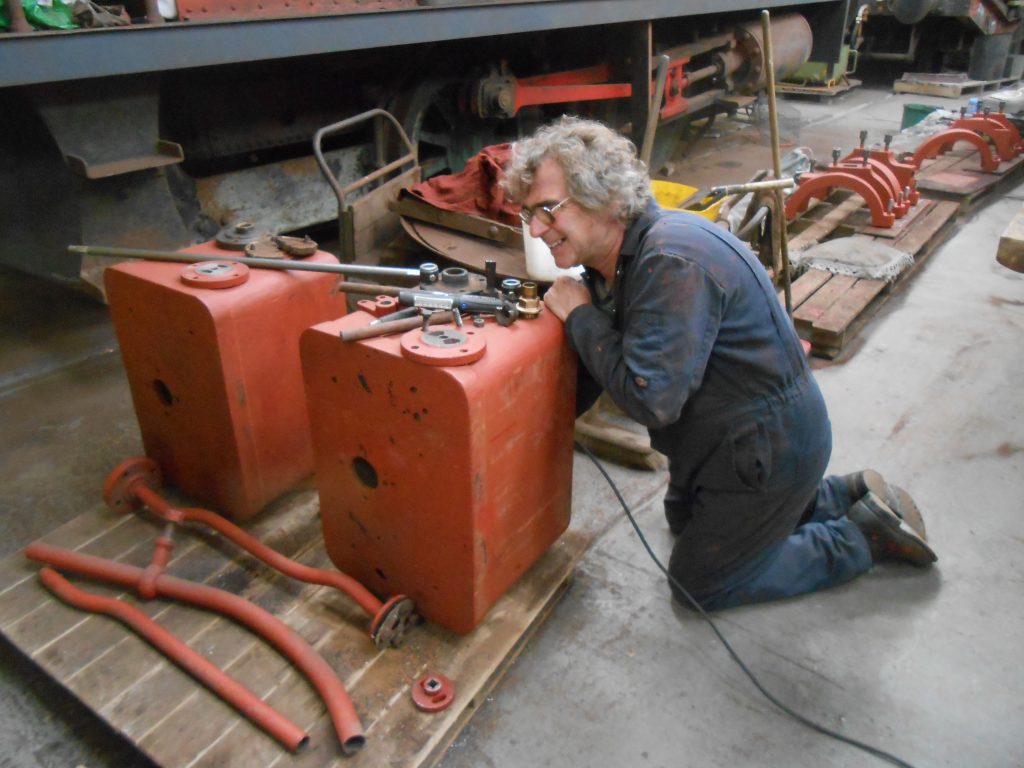 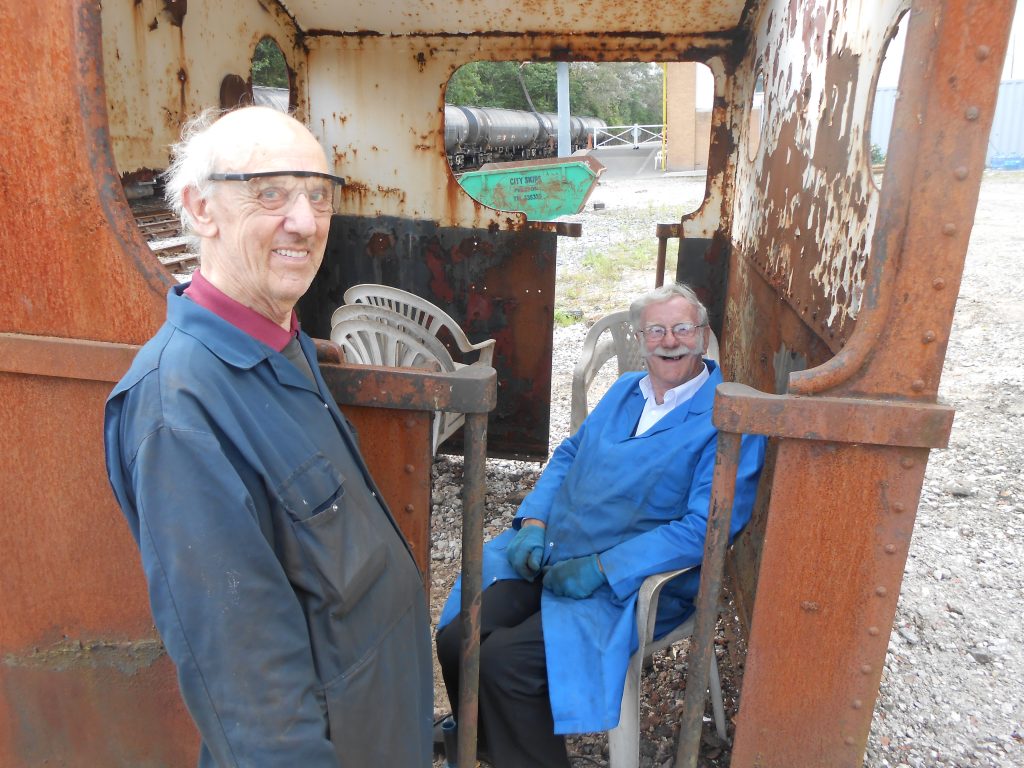 There has been more attention given to Caliban, with Adrian working on the frames and sand boxes, John H in the cab, and Howard on the sanding gear. 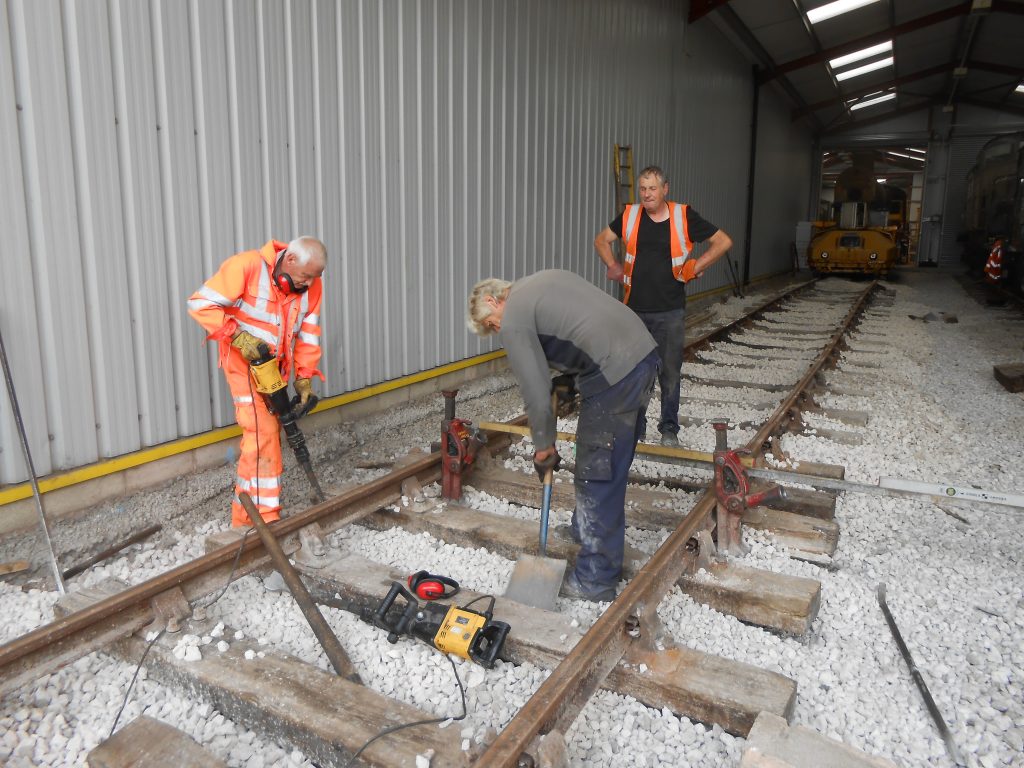 More progress has also been made with levelling the track on road three of the unheated portion of the shed, with Ed, Phil and Keith seen here.

Finally, Alan and Tim were at Shildon on Friday for a training session on the new rule book and newly issued procedures. There then followed a further practical assessment on FR 20. The locomotive was again used on Saturday for more crew assessments as well as for operating a passenger service. 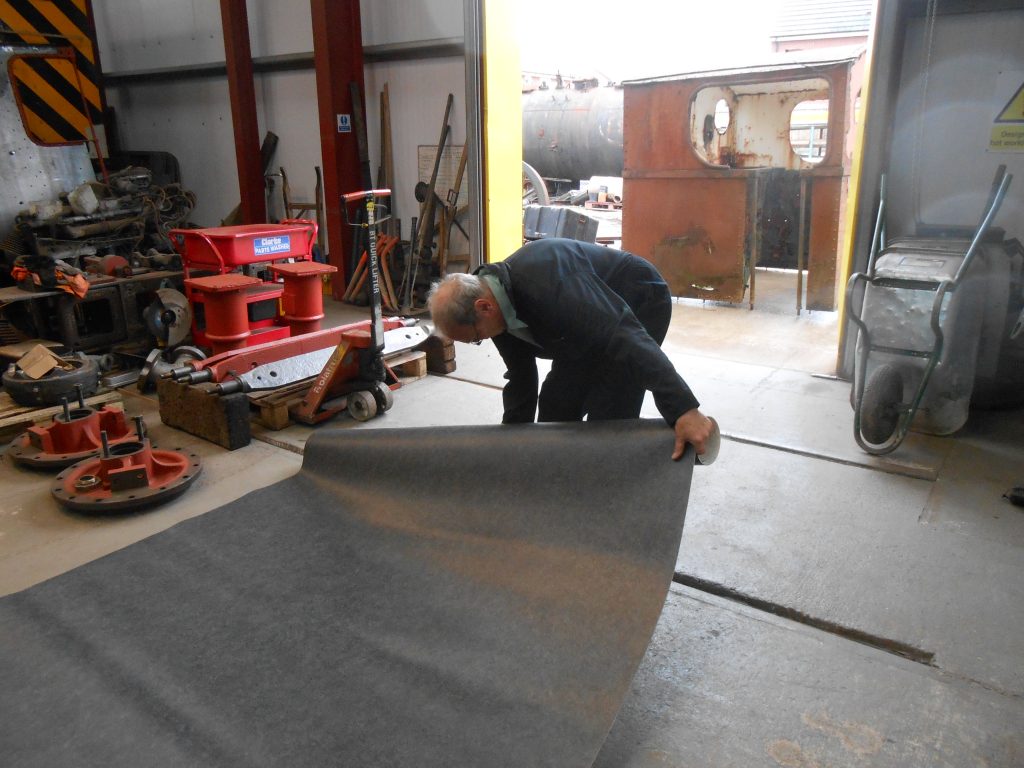 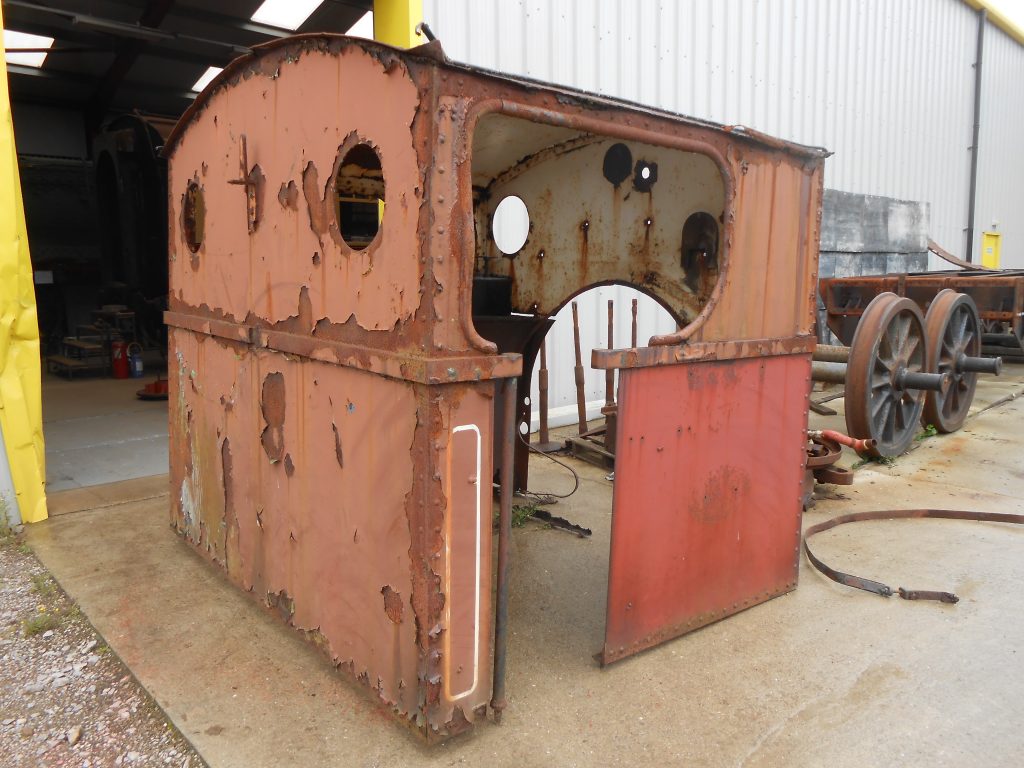 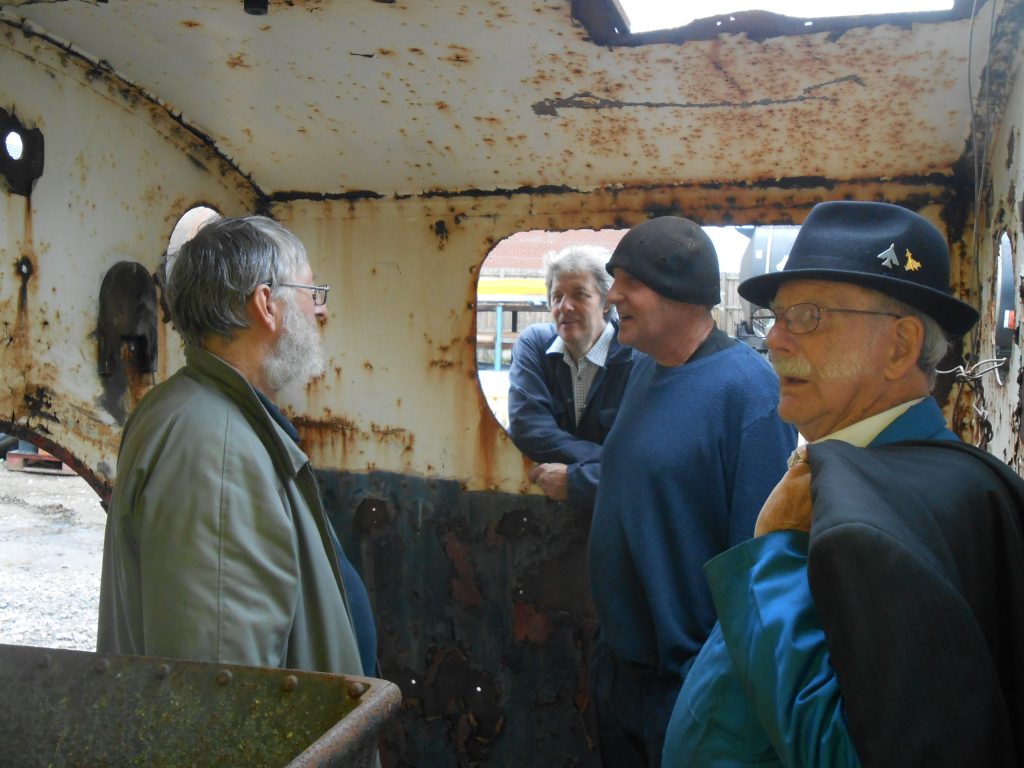 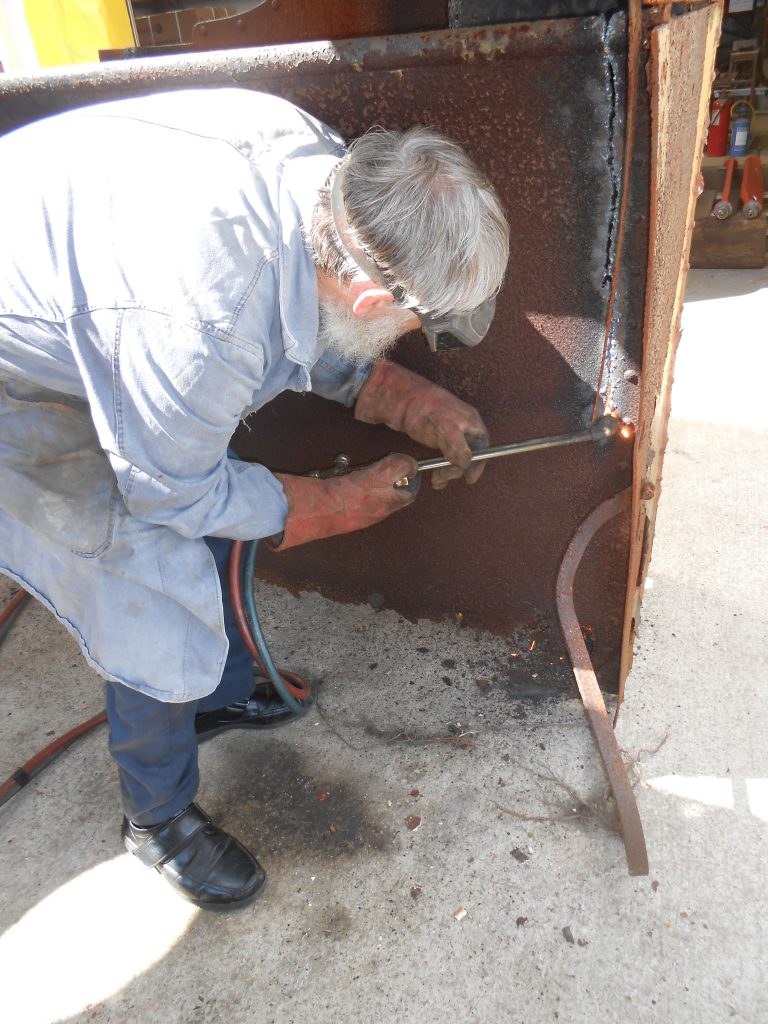 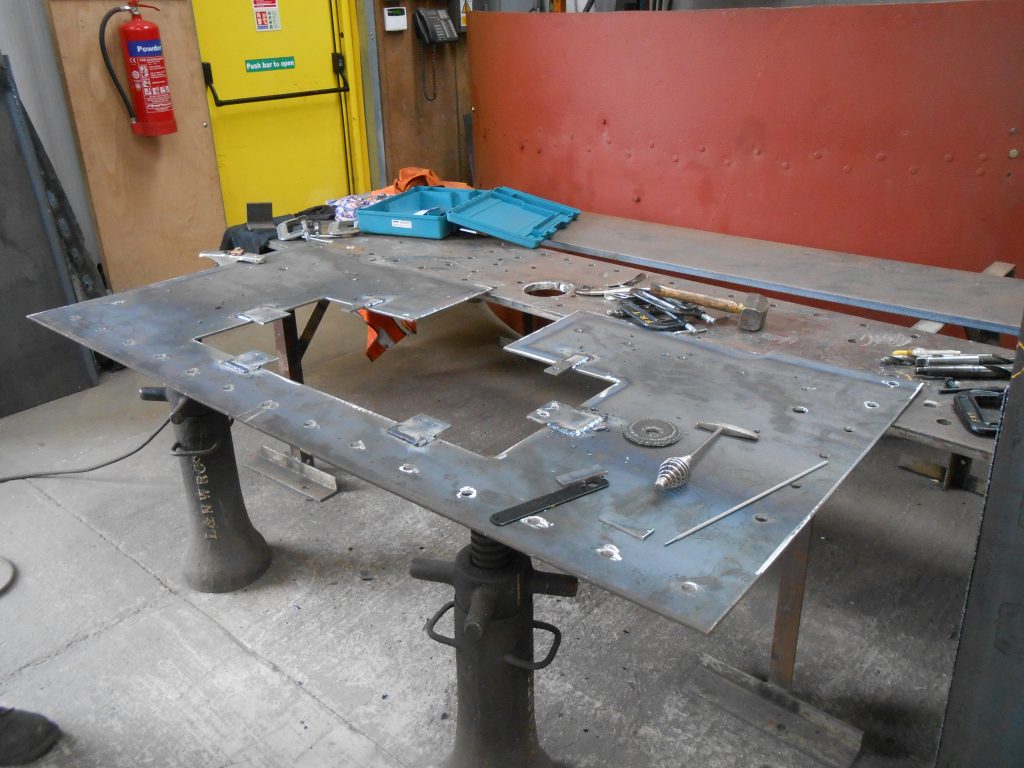 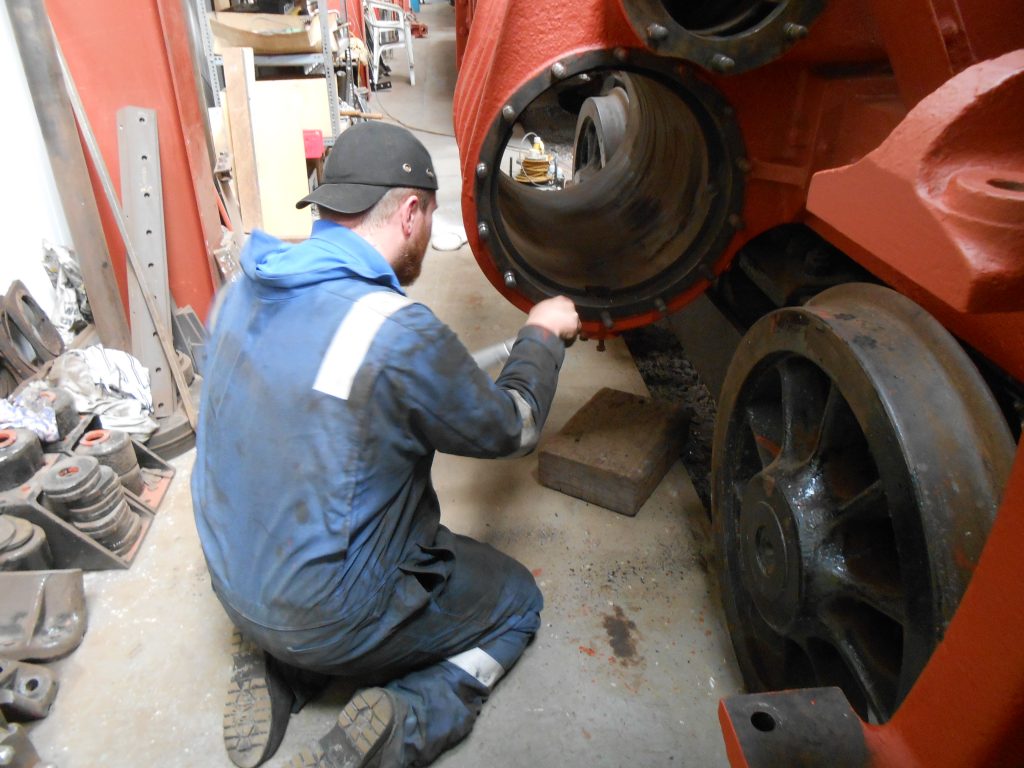 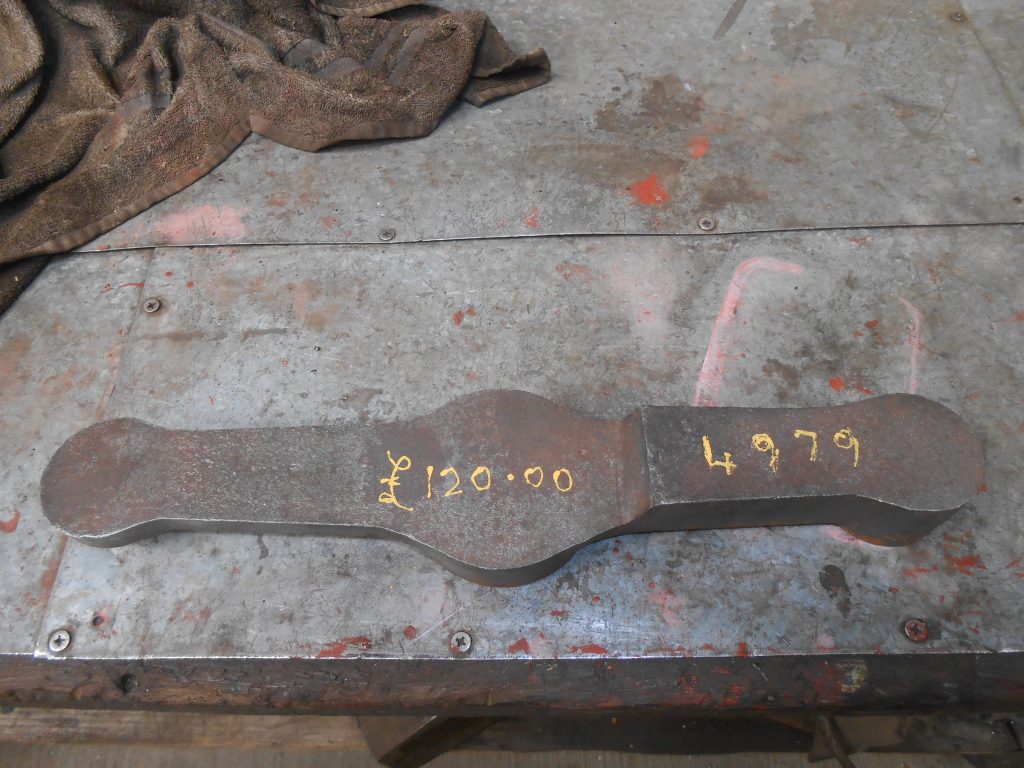 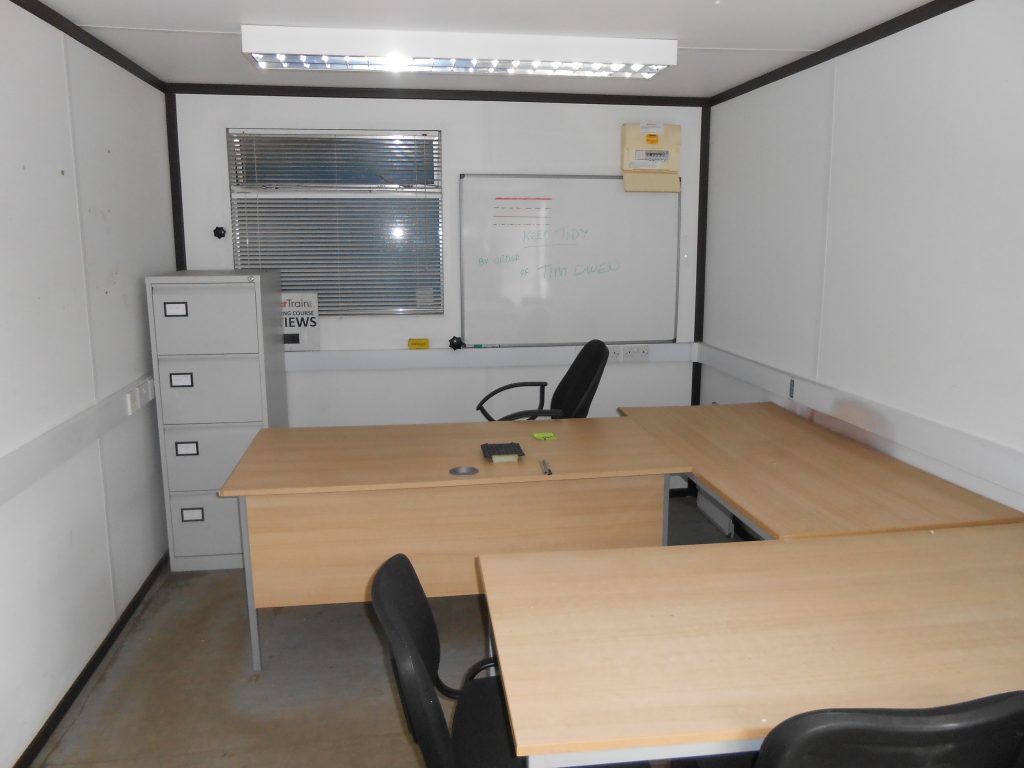