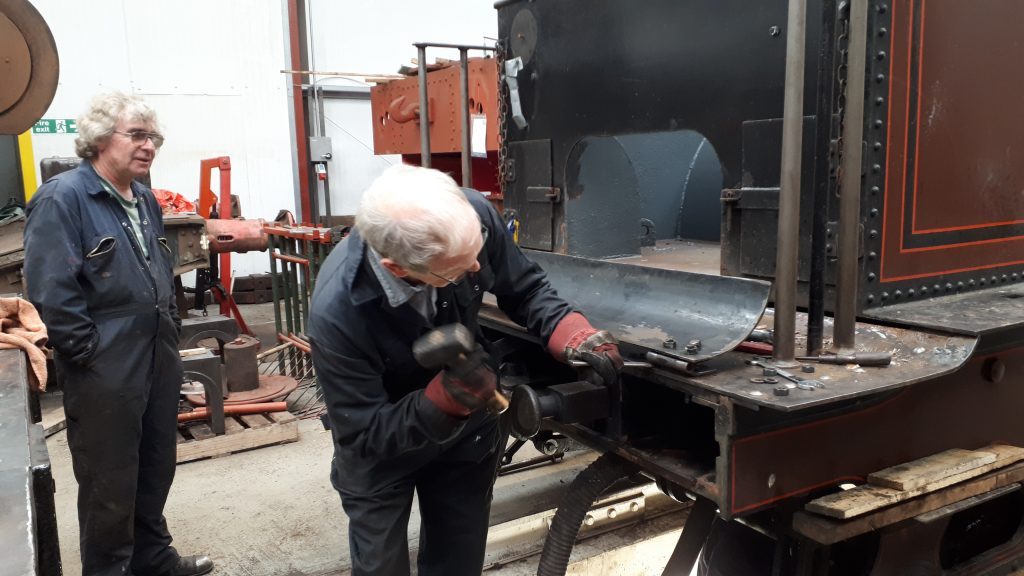 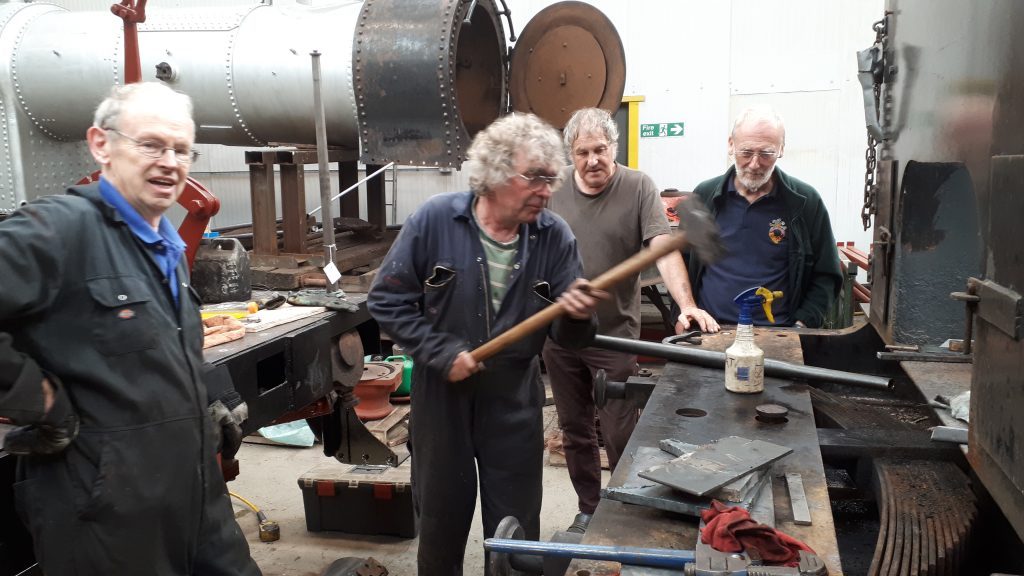 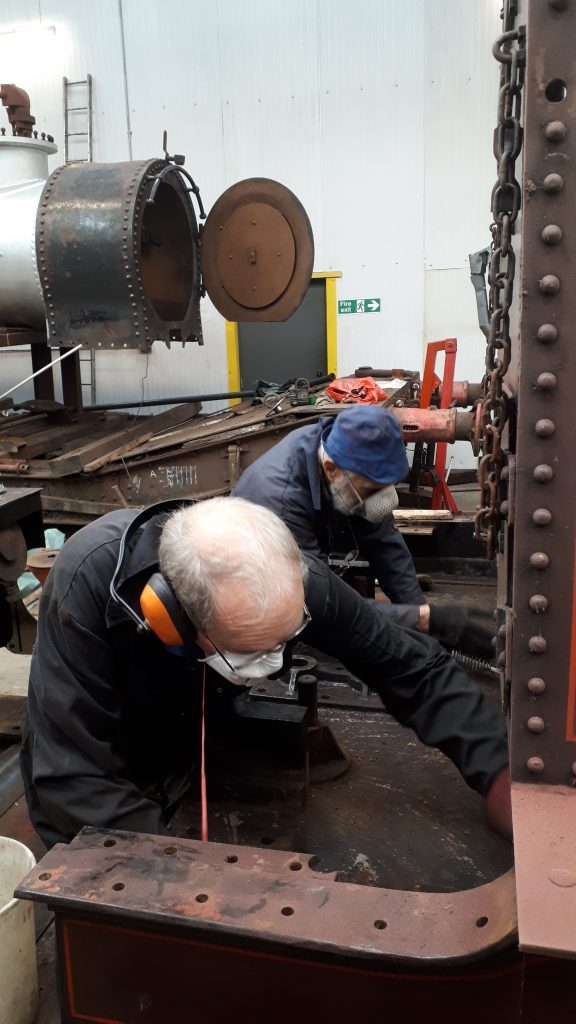 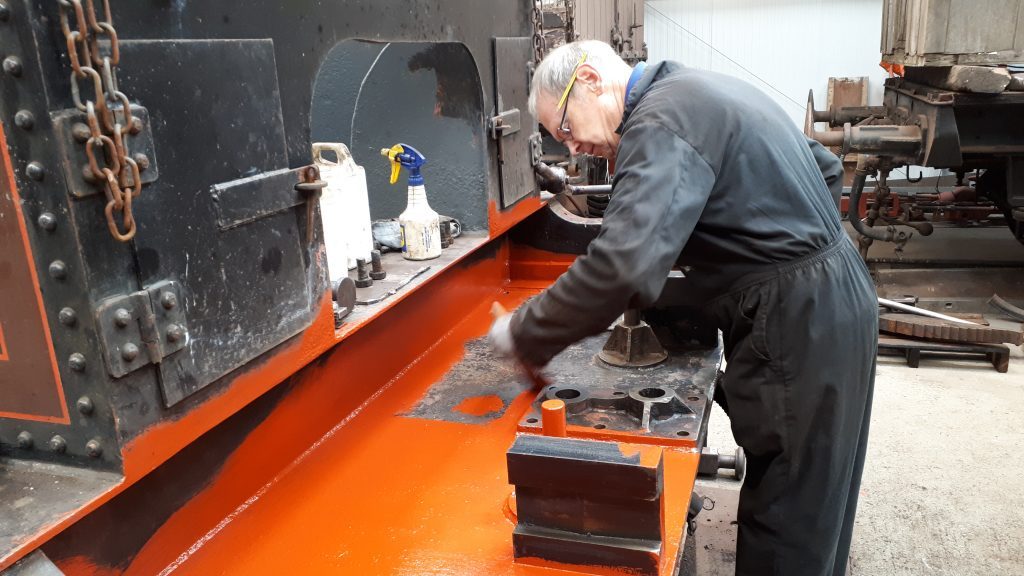 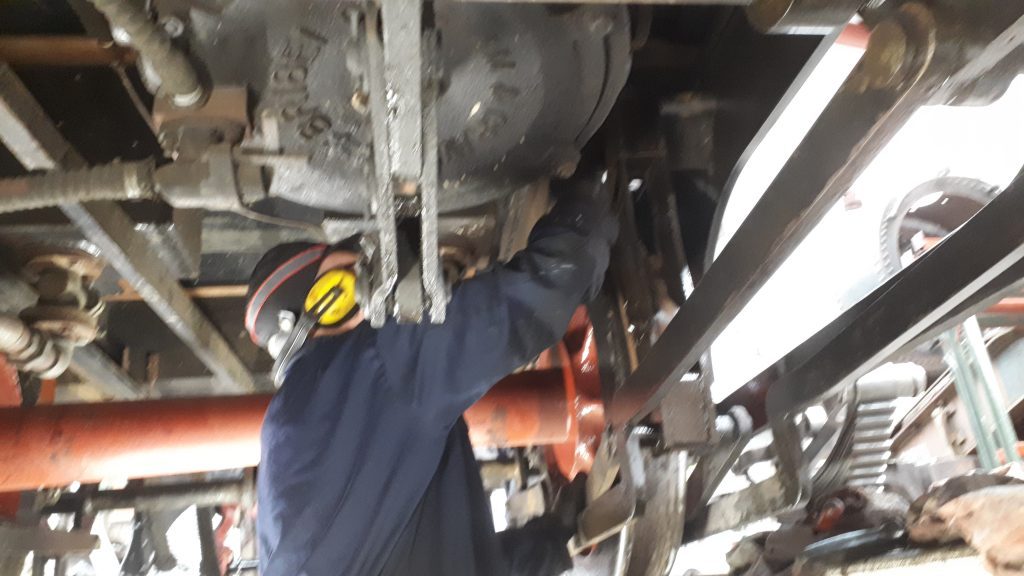 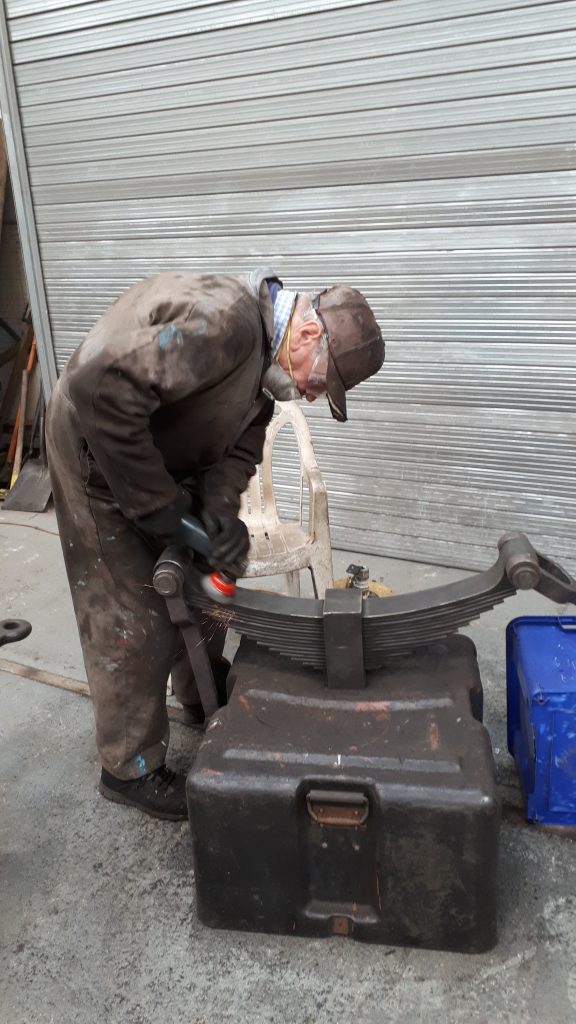 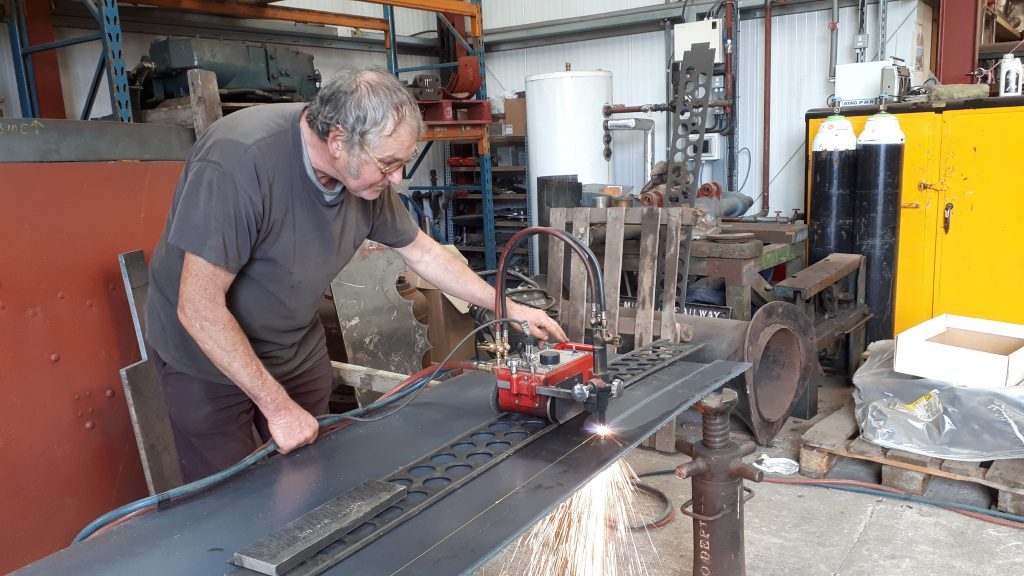 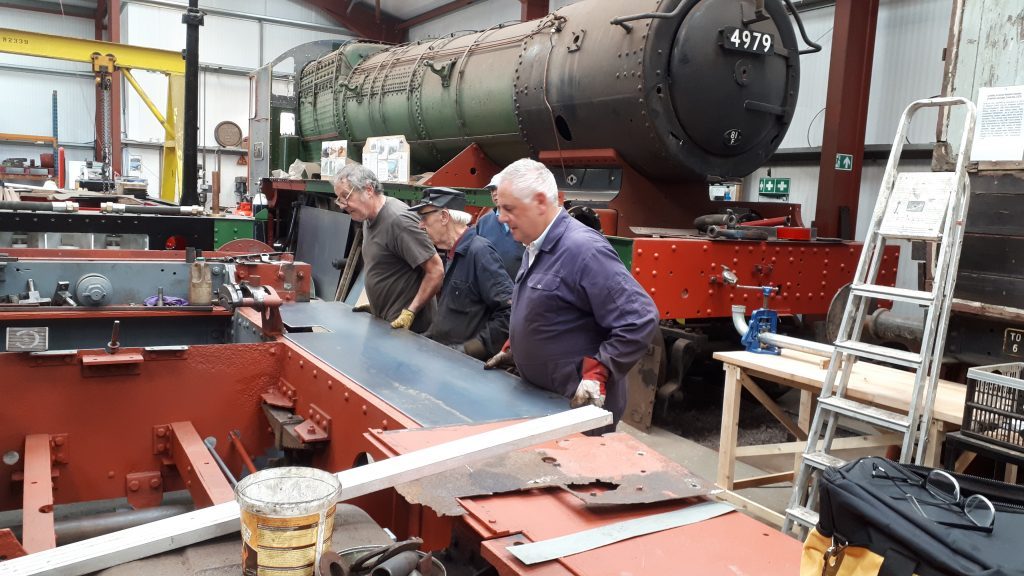 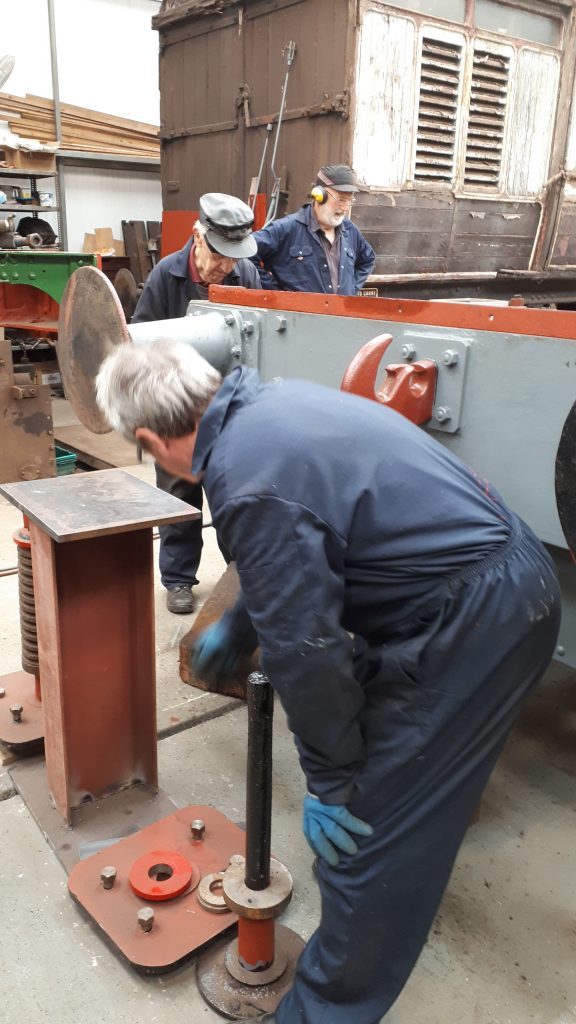 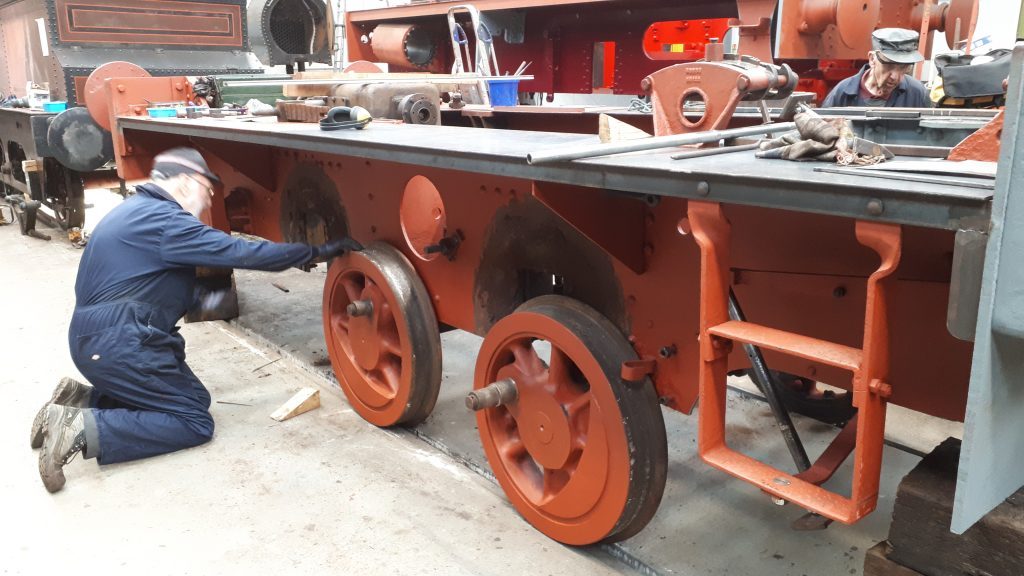 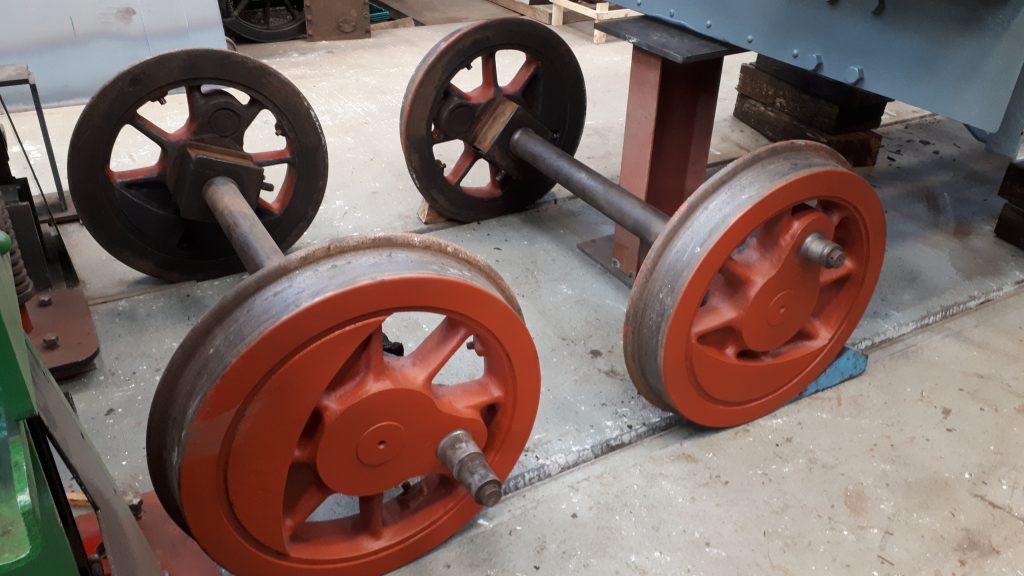 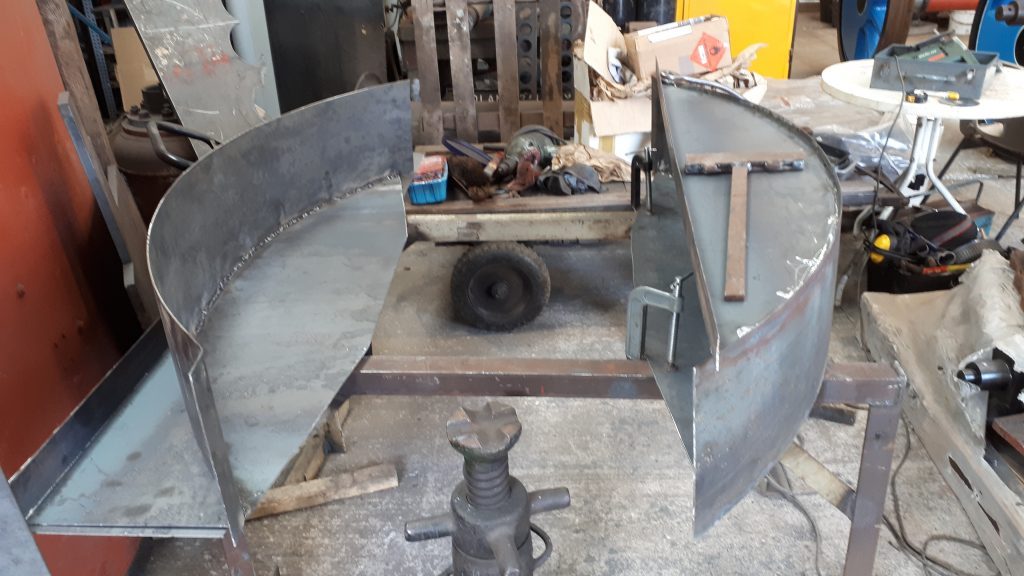 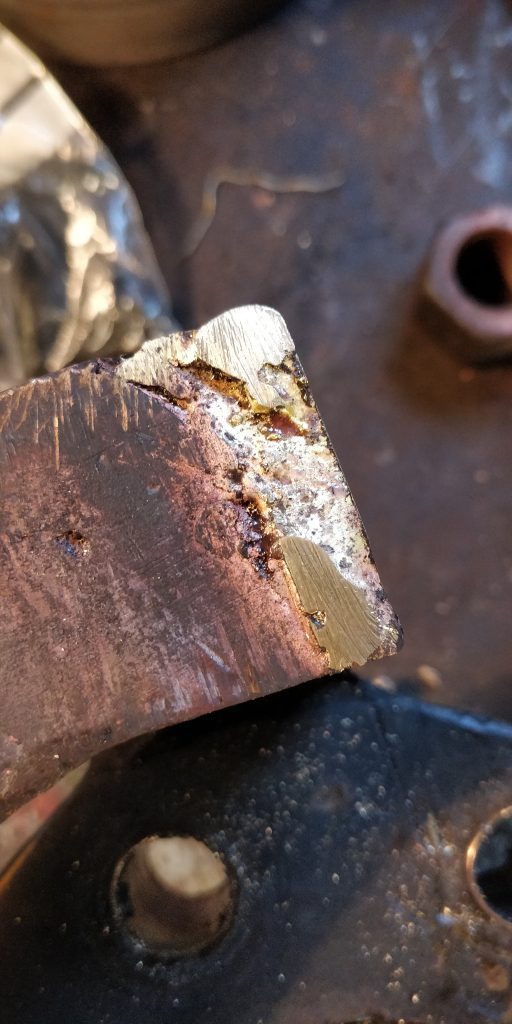 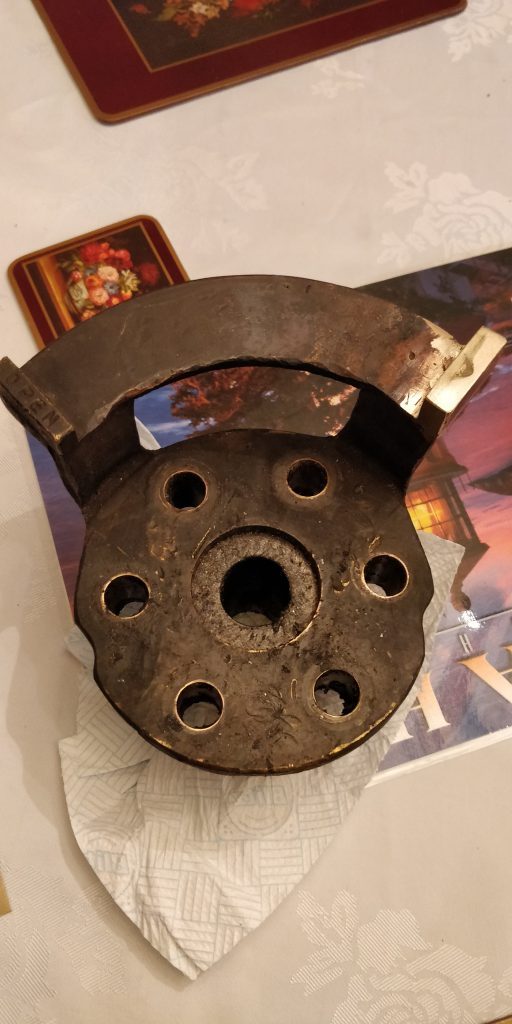 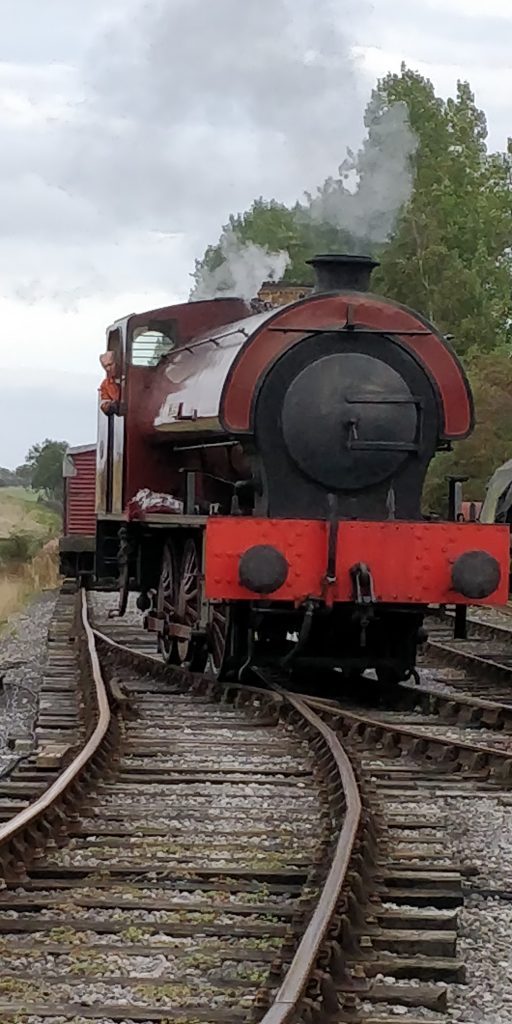 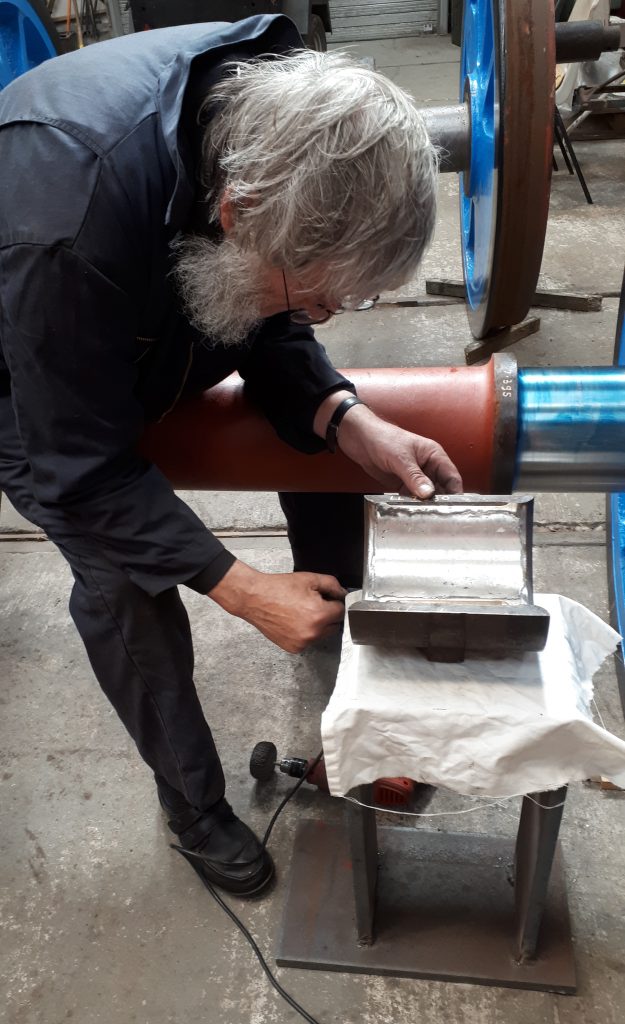 More good progress was made with Caliban last Wednesday with Alan tackling the job of scraping in the newly re-metalled bearings. 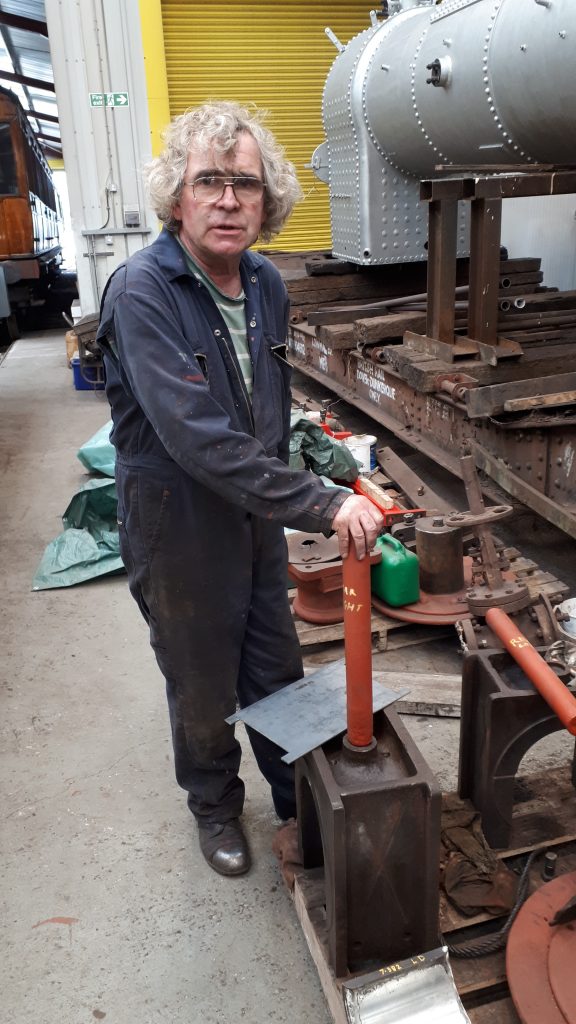 With the vision of the locomotive being lowered back on to its wheels in the not too distant future, Ade was checking the spring support pins. 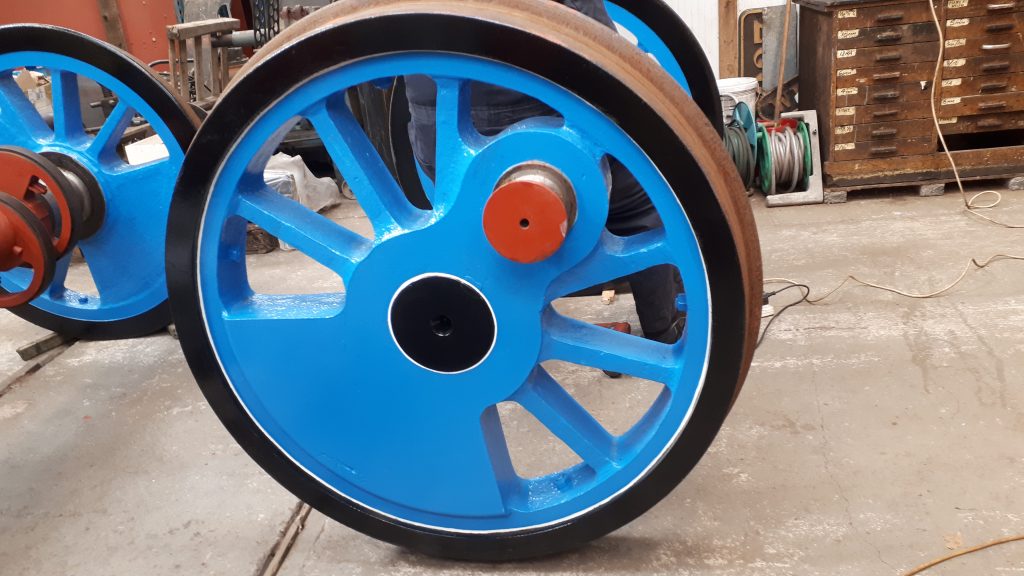 Also achieved last Wednesday, in good time before the lowering of the loco, was the lining out of Caliban‘s wheels. 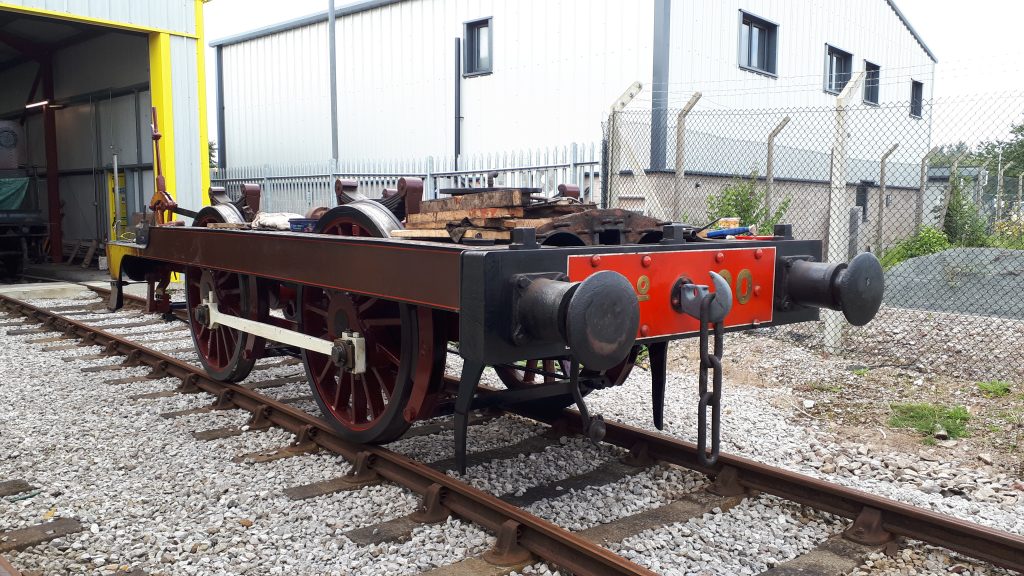 As forecast in last week’s blog, Ade conducted a shunt which enabled Fluff and FR 20, complete with tender, to be positioned on road three of the heated section of the FRT shed in readiness for the winter work programme. Fortunately it was possible to do the shunt whilst the rain held off and FR 20’s frames made a rare appearance out in the open. 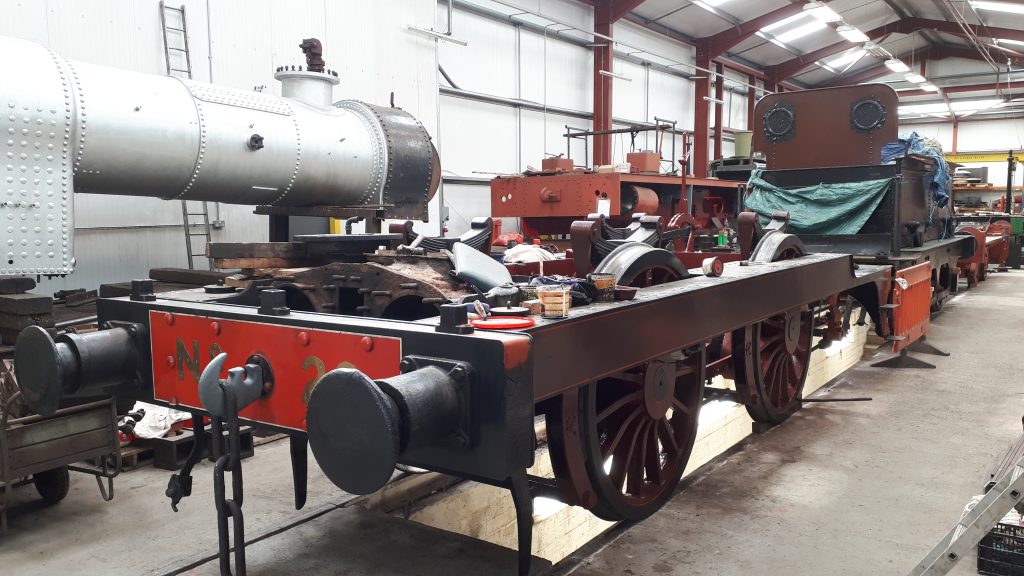 The new line up in the shed is seen here.

Phil Bell, Fred and Roger soon got to grips on Friday with the task of cleaning up FR 20’s tender frames and brake gear.

5643 has been in operation at Embsay but unfortunately suffered a leaking mudhole gasket on Saturday. After a number of ‘phone calls and texts, fresh lead mudhole joints were supplied on Saturday evening from Tim’s strategic store in his garage. Mrs O was extremely surprised that the lead rings were found by Tim in a matter seconds whereas the more normal search for bicycle pumps, inner tubes and helmets always takes many times longer! 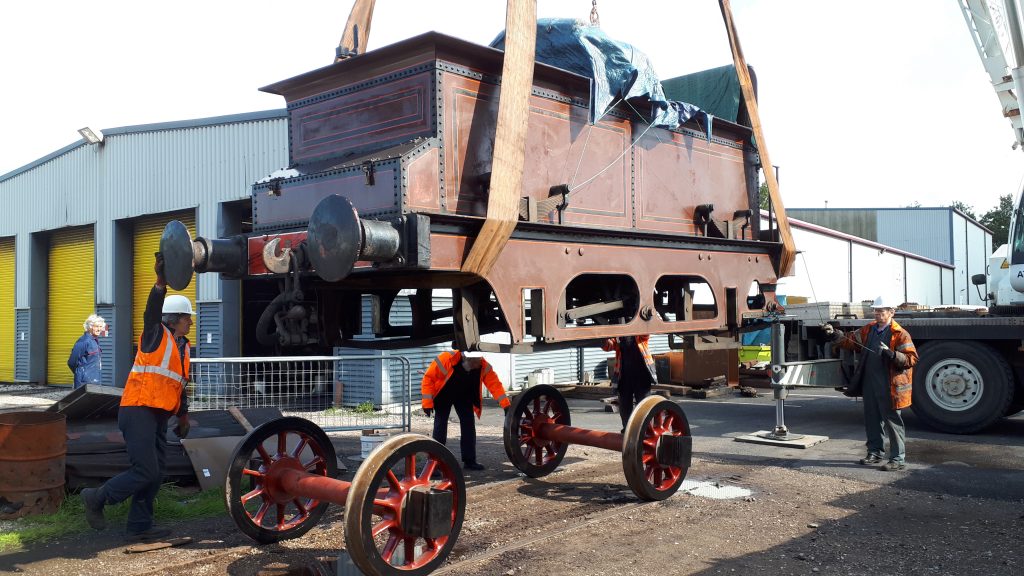 FR 20’s tender chassis was duly reunited with its wheels last Wednesday although the blustery wind did its damndest to try and make life difficult for us. 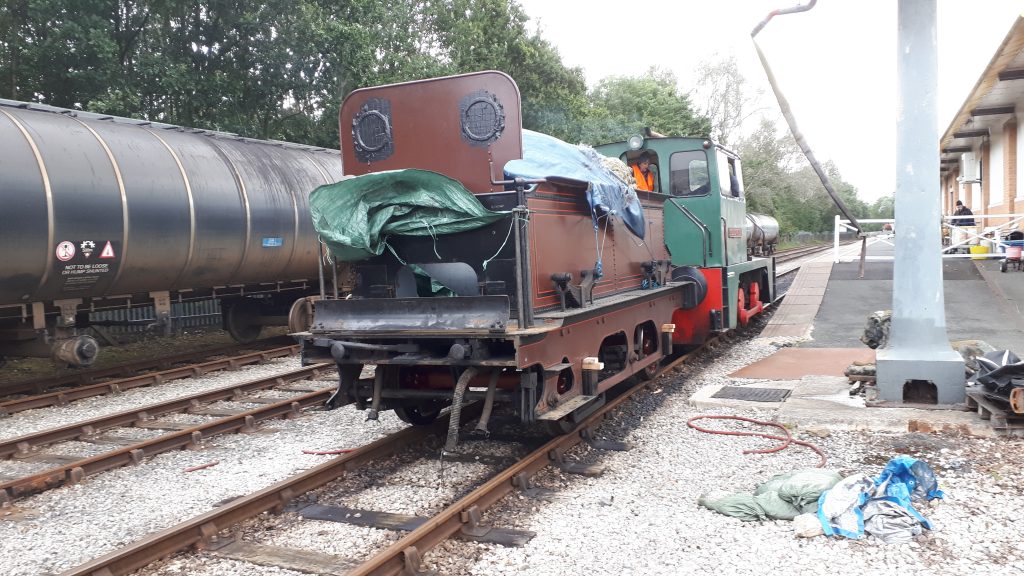 However, patience paid off and, after a successful struggle in damp conditions to re-fit the brake gear, the tender was shunted around to the FRT shed late afternoon after Ade had shunted around some more coaches for the RSR.

The good news is that the tender appeared to roll well after the work to convert its bearings from brass to white metal. We hope that this is a good omen for the future. Other news on FR 20 is that Andy Booth has made more progress in beading over the tubes in the boiler and hopes to complete the task this week.

With FR 20’s tender wheels now tucked under its frames, Ade wasted no time in bringing Caliban‘s wheels into the FRT shed for the newly white-metalled bearings to be scraped in.

It is now intended to rearrange the line up on road three of the FRT shed this coming Wednesday so most of Friday was spent in tidying up the shed in readiness for the shunt. Whilst you don’t get quite the same satisfaction from doing this kind of housework, it should make life much better for us as we move towards this winter’s work programme. 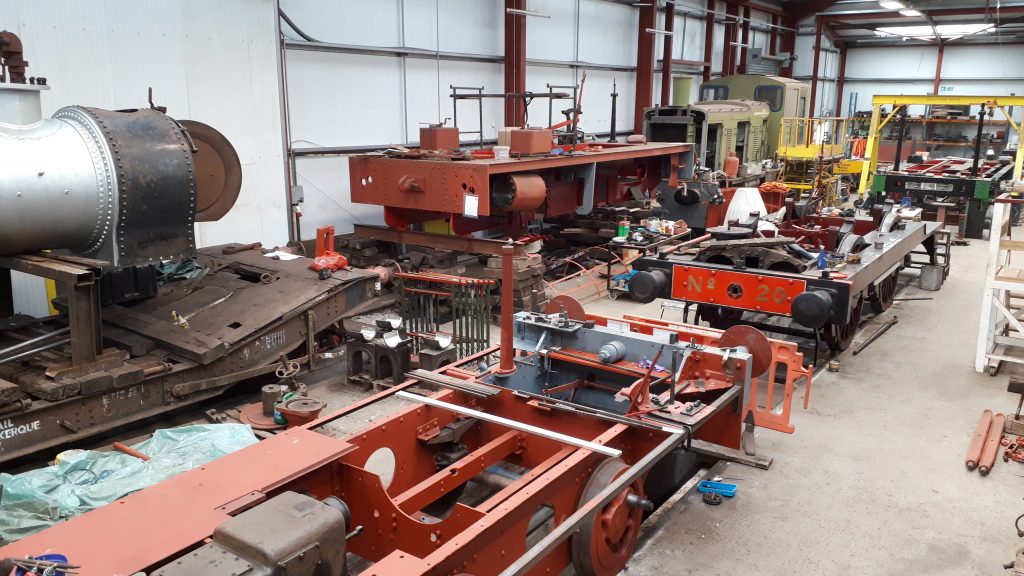 There is disappointing news this week in that Jim Hanmer and Alan Preston are having to abandon their current attempts to resurrect Fluff‘s engine, mainly because of the difficulty in tracing replacement components. The engine is being reassembled in its current state and we will have to consider whether it is worth further pursuing the repair of the existing engine or perhaps finding a suitable replacement. 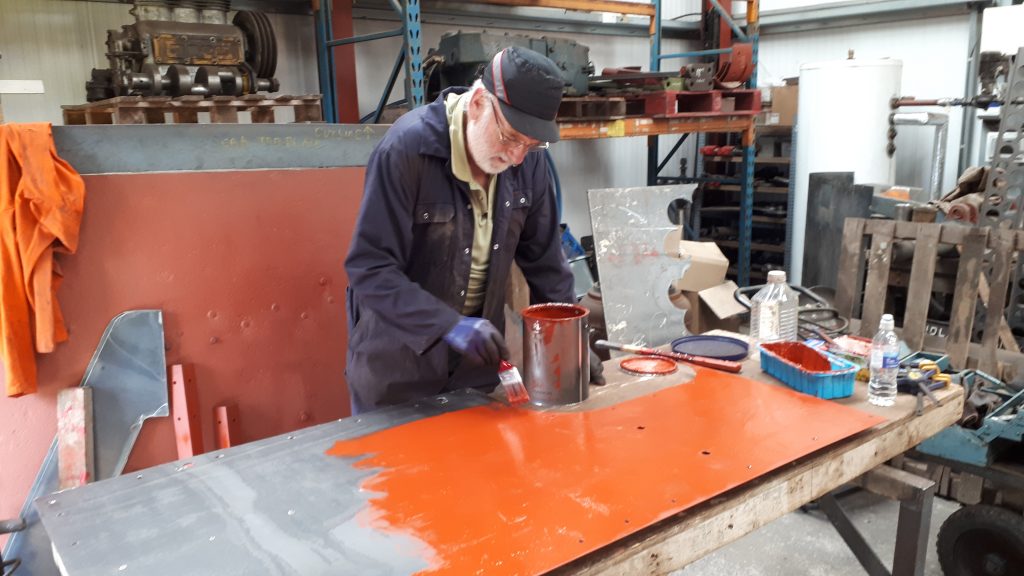 In the meantime work has continued in rebuilding the platework and assembling other components, with Phil Bell giving the newly fabricated cab sides a coat of red oxide. 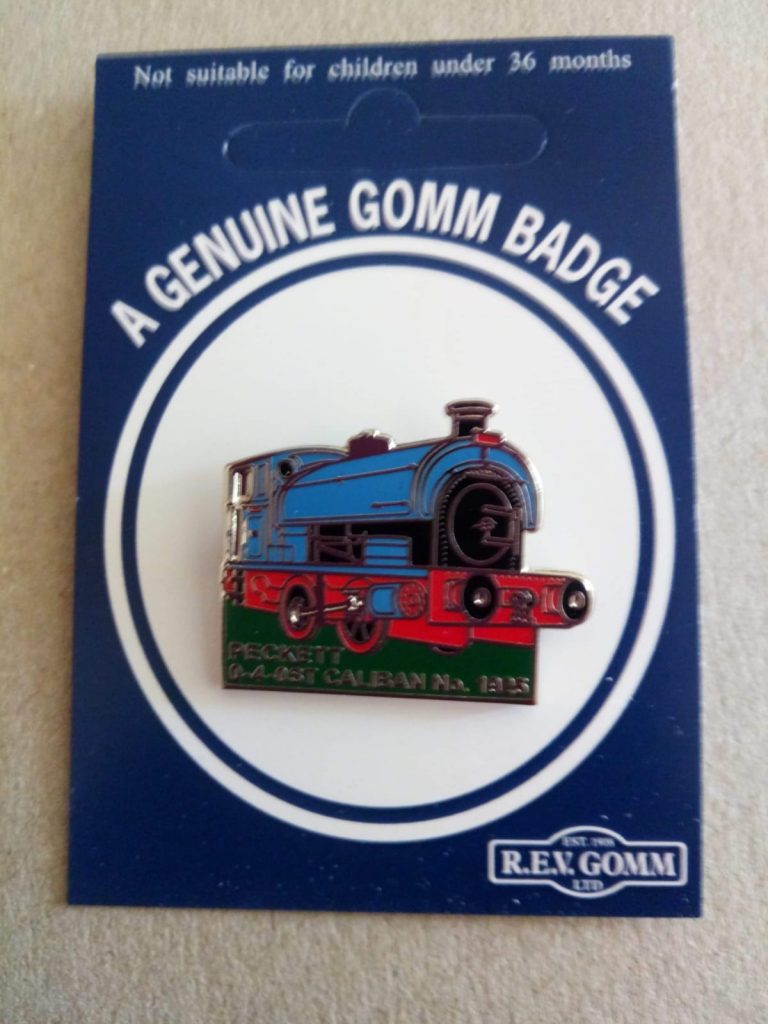 Finally, on the sales side, Alison informs us that she now has a brand new badge depicting Caliban for sale. Please contact either Alison or Alan if you would like to purchase one, with a special members’ rate available.

As we head into the Autumn period there are signs of things starting to come together with some of our projects. 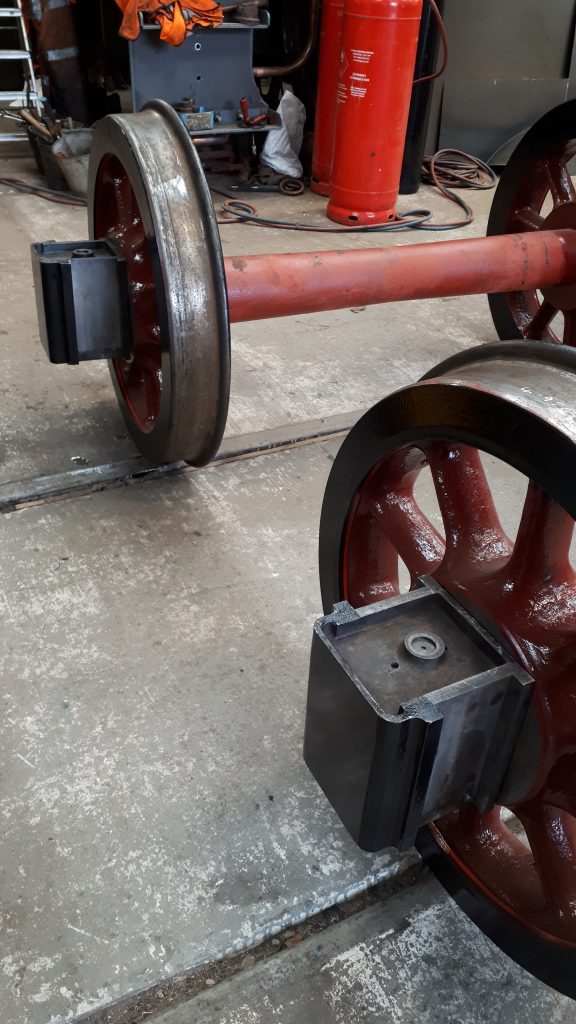 Wednesday saw FR 20’s tender axleboxes being re-assembled and mounted on the journals. This is in readiness for the arrival of a crane this next Wednesday morning when it is planned to place the tender back on its wheels.

This exercise will not only enable the cleaning down and re-painting of the tender and attention to the brake gear to take place in the coming weeks, but will also allow room in the shed for Caliban‘s wheels to be accommodated so that the bearings can be scraped in. Once this is achieved we can look towards lowering Caliban back on to its wheels as well. After that it will be the turn of Wootton Hall‘s tender wheels to come in for its axlebox bearings to be worked upon. 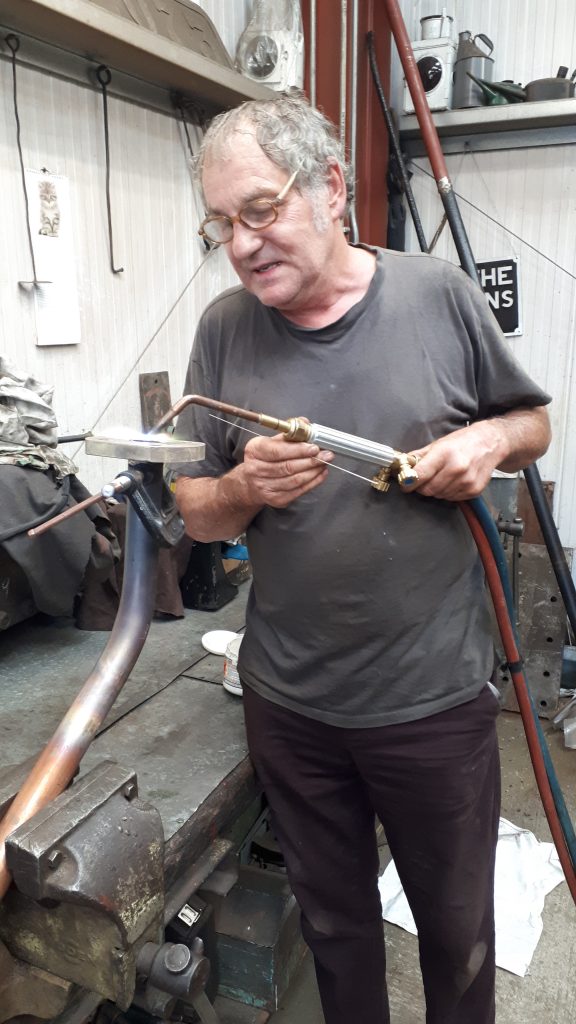 We include a photo this week of Keith silver soldering a flange on to a piece of Wootton Hall‘s injector pipework. 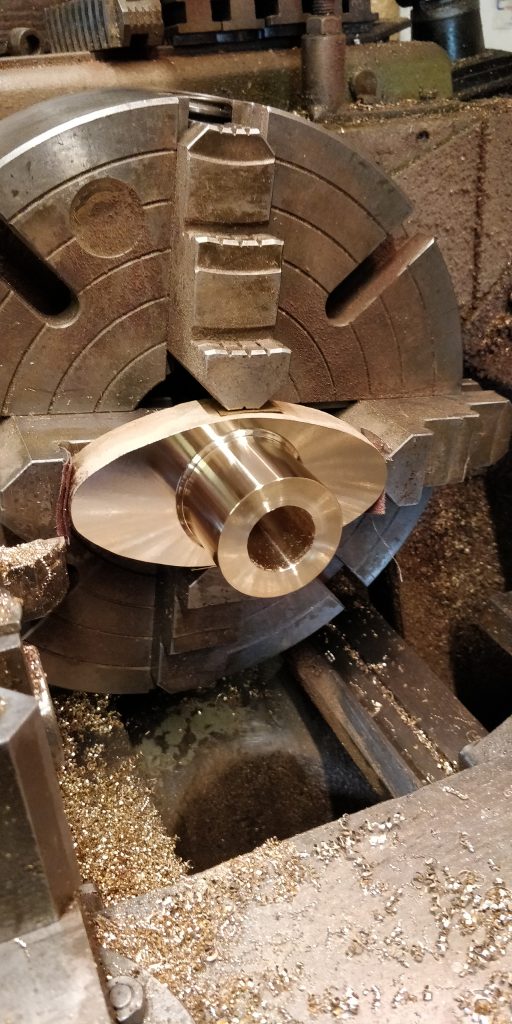 Over at Embsay there has been significant progress with Cumbria. A new regulator gland has been cast and machined following the discovery of a fracture in the old regulator gland. This has now been fitted and packed along with a replacement regulator quadrant. 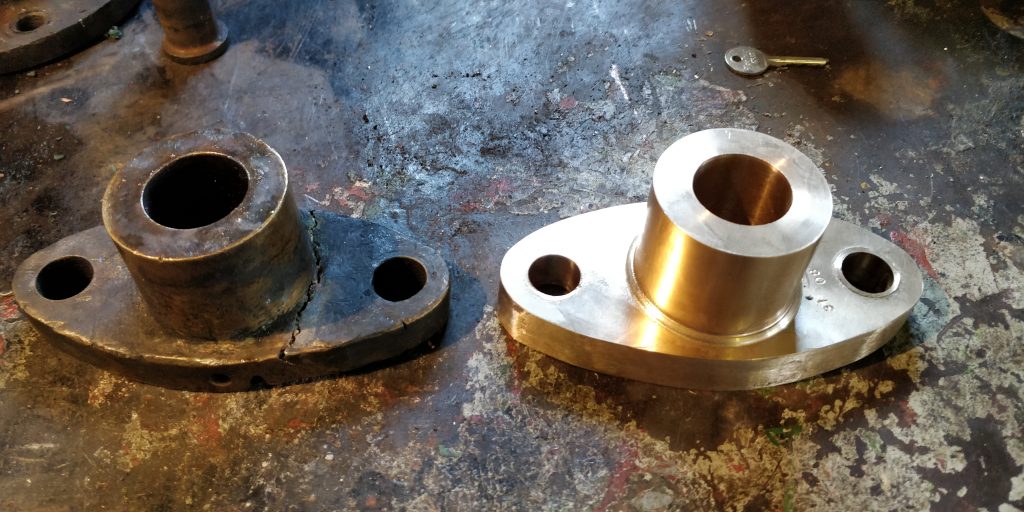 The regulator has been reassembled in the dome after much work to remove side play and to ensure that surfaces are compatible. The hole in the link rod has been opened up to receive a new pin and the main and pilot valves modified to suit. The boiler surveyor will be undertaking the cold inspection of the boiler on Thursday and, subject to a satisfactory report, the boiler will be reassembled for a steam test. Fingers crossed! We are indebted to Charles Adams and Andrew Hirst for their work on Cumbria in recent weeks.