Phil Bell and John Davies have been making further progress with the fitting of Fluff‘s new cab roof. Keith has fabricated a steel bridging piece to go above the cab door which should enable the roof sheet to be pulled and held into place. 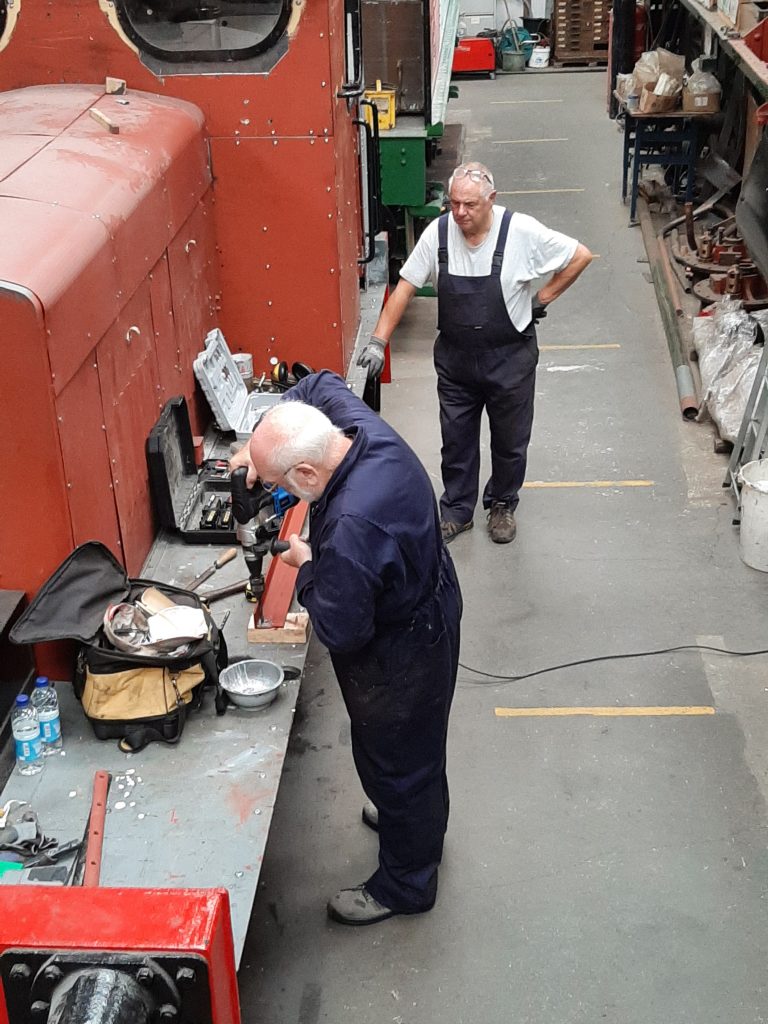 Phil is seen drilling fixing holes in the bridging piece, watched by John.

John Dixon and Tim managed to get the final coat of gloss white paint onto the roof of Great Eastern Railway Royal Saloon No. 5, despite the lingering heat from the day before. 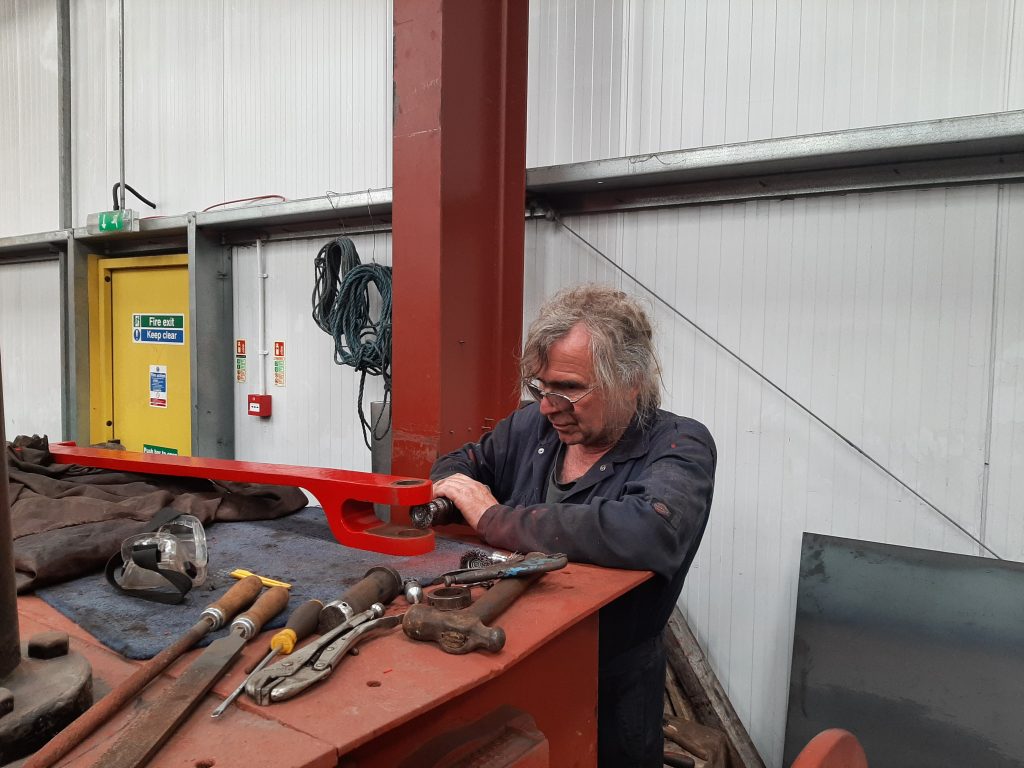 Ade has been busy readying the eccentric straps for fitting on Caliban. 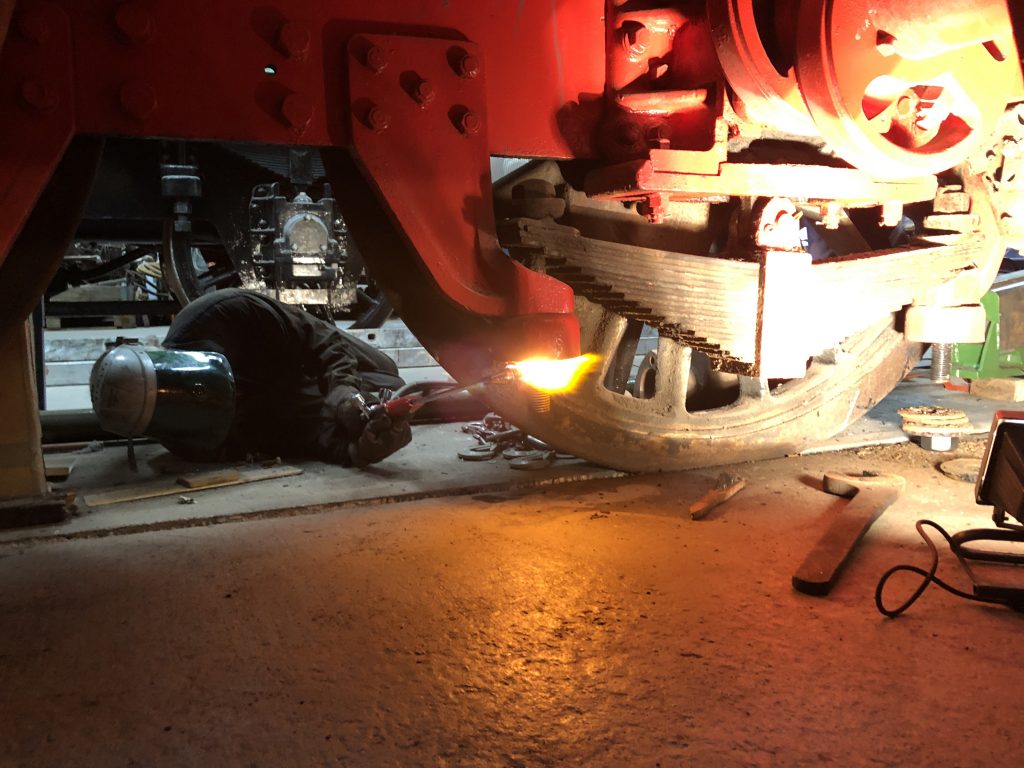 George appeared at Preston on Saturday and was given the task of removing the nuts and cups from Wootton Hall‘s spring hangers. The middle hangers proved particularly difficult and required the application of some heat and a sledge hammer to achieve success. 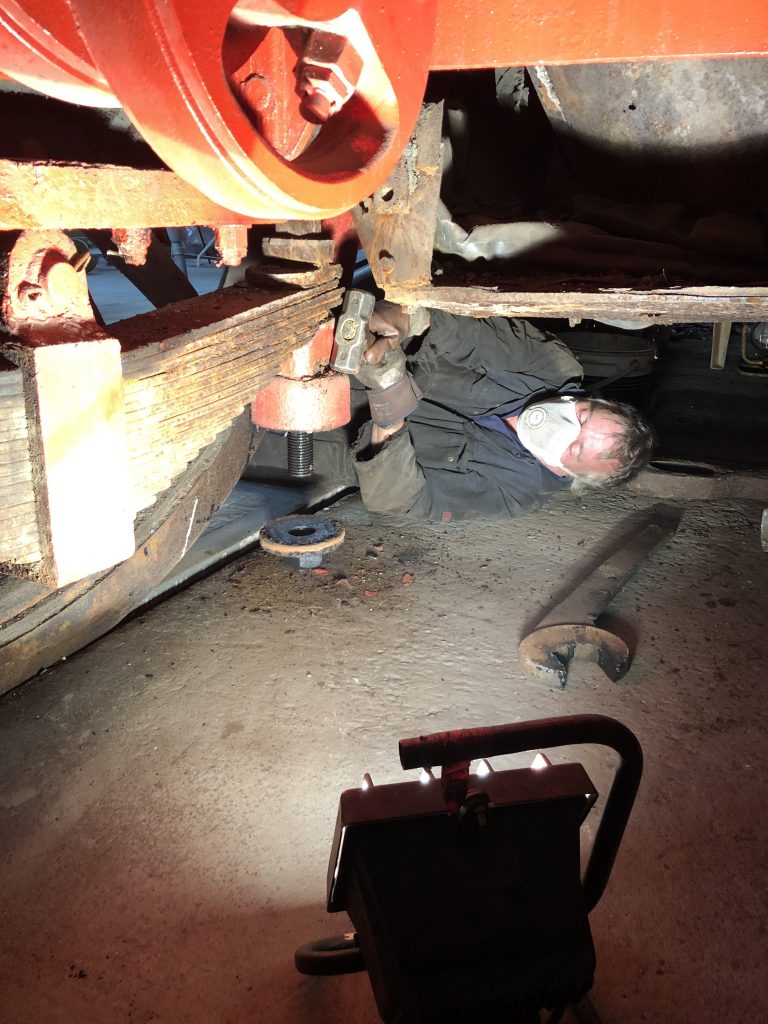 It must have been around sixty years since they were fitted. 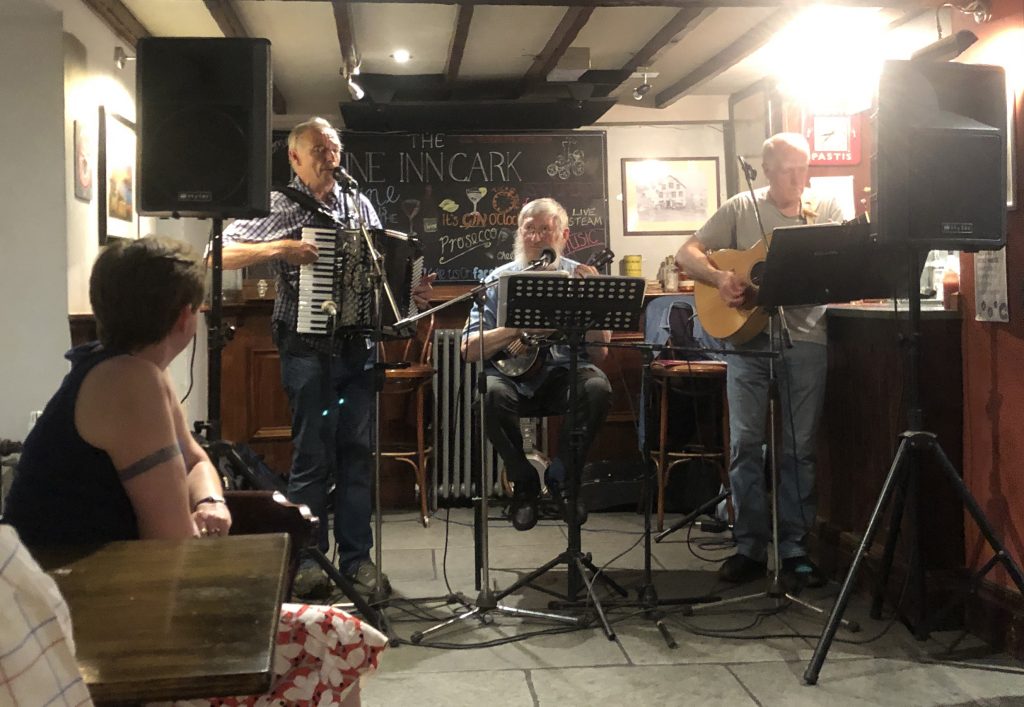 Our folk group Live Steam had a successful fund raising outing at the Engine Inn, Cark-in-Cartmel, on Friday evening, seemingly brushing away any cobwebs gathered since the last gig on New Year’s Eve. Another gig is in the offing if diaries can be coordinated.

Finally, it seems that our friend, Anthony Coulls at the National Railway Museum, has been publishing some short documentaries on YouTube with the title Curator with a Camera. Here is his take on Furness Railway No. 3, Coppernob: “A Victorian locomotive blasted by war”. 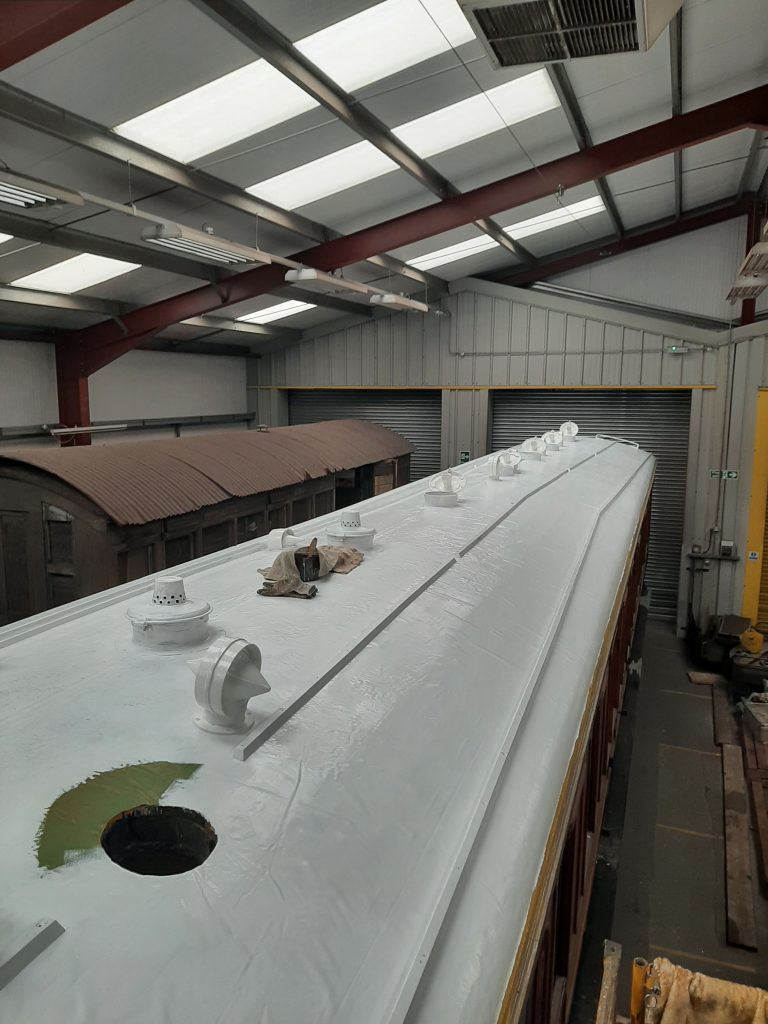 Despite the warmer weather this week, John Dixon and Tim managed to get two coats of undercoat applied to the roof of Great Eastern Railway Royal Saloon No. 5. John surprised us all by having to confess that he had discovered a rare mistake in that he had put one of the rain strips in the wrong place!! Still, as they say, the man who never made a mistake never did anything! Heat permitting, it is hoped to put a top coat of paint on the roof on Wednesday. 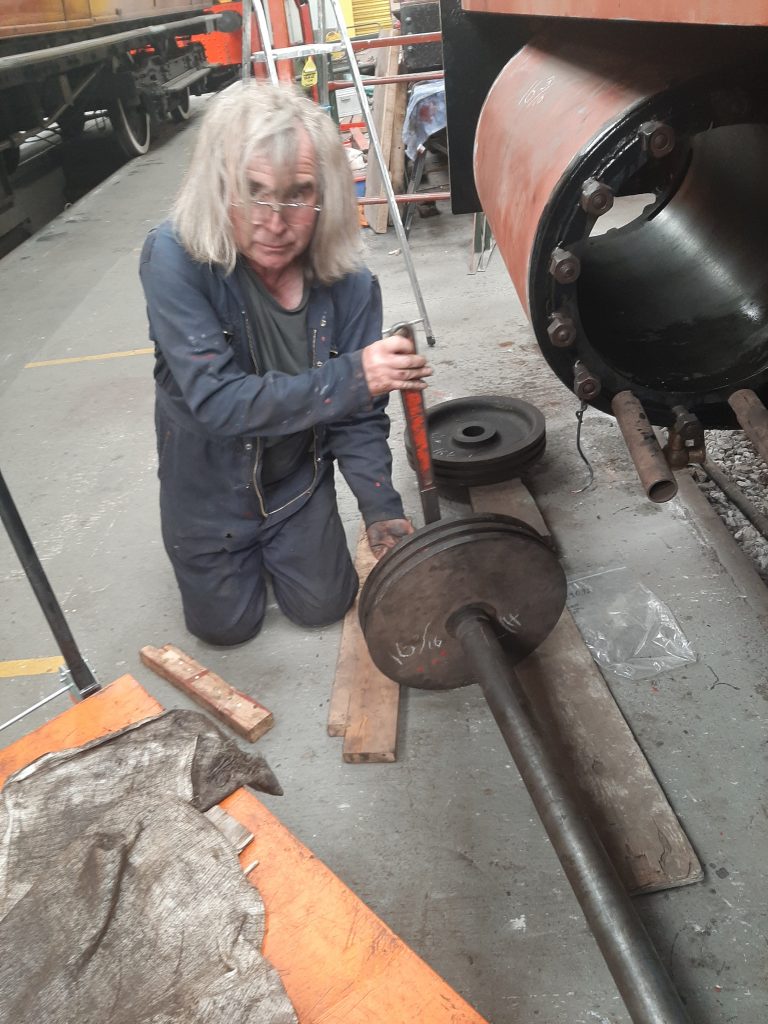 Ade has been trying to fit the larger of Caliban‘s two pistons into one of the re-bored cylinders. A skim on a lathe is probably now required to ensure that this job can be completed. 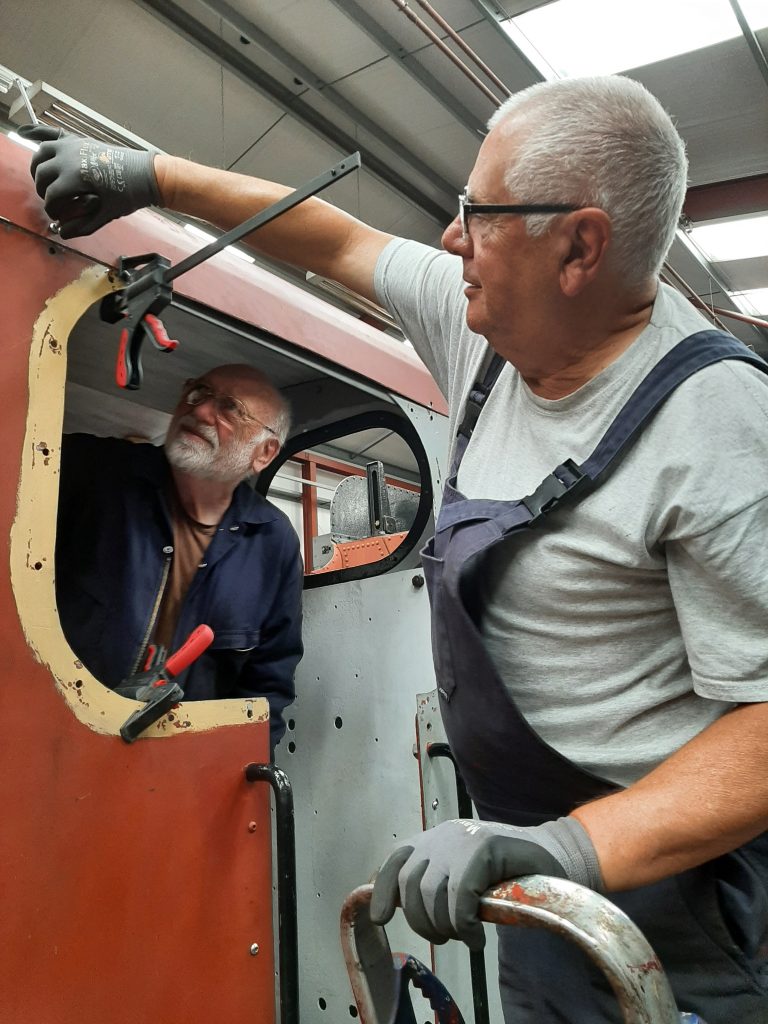 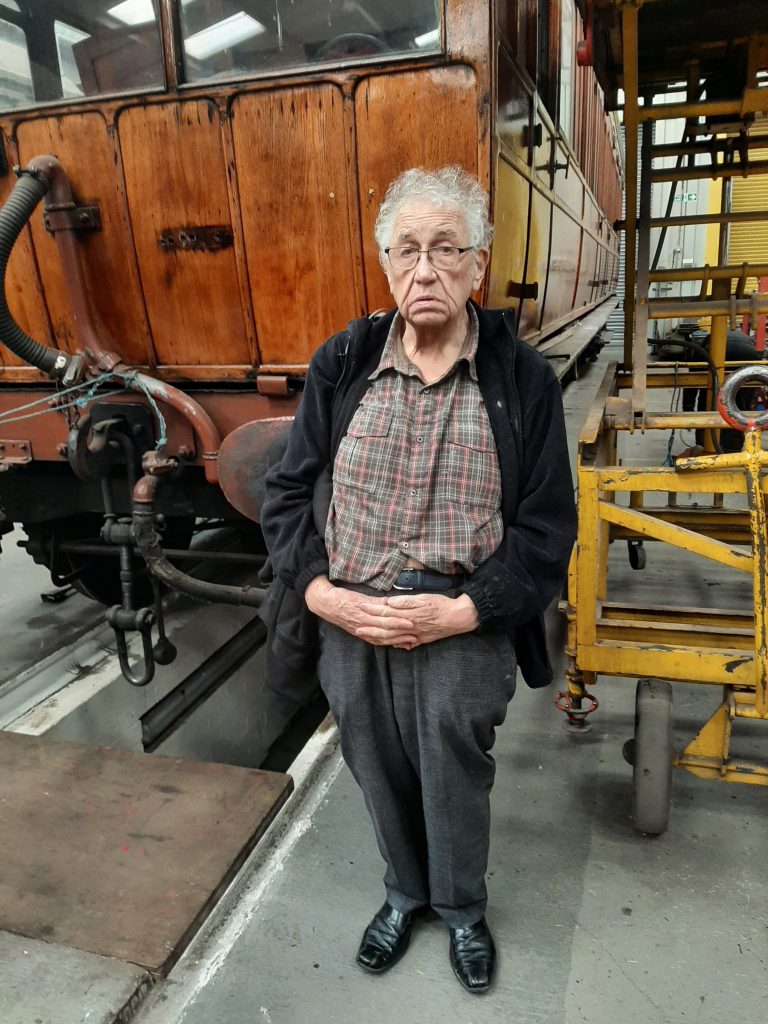 We had a rare visit from Bob Thomson on Friday. We couldn’t get a smile out of him for the photo but assume that he was happy to be back.

We hear that Andy Booth should be able to make a start on an interim re-tubing of ‘Austerity’ 0-60ST Cumbria next week. Arrangements are being made to transport the new tubes from Preston to Embsay.

Friday sees our folk group, Live Steam, making another appearance at the Engine Inn, Cark-in-Carmel starting at 8.30 pm. Please pop along and support the band if you are in the area. 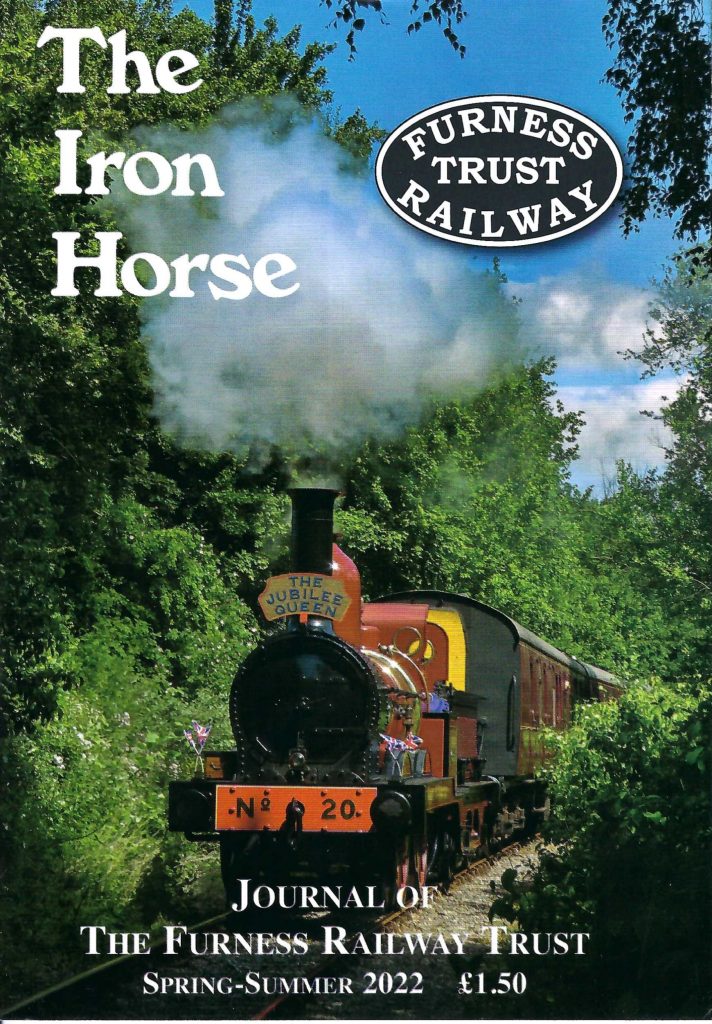 Finally, the latest edition of The Iron Horse magazine has been delivered from the printer and should be with members very shortly, along with the Trustees’ Annual Report and Accounts and an invitation to the Annual General Meeting, which will be held on Tuesday evening, 13th September.

Back after a holiday break – and the weather is now looking good! Typical!

After some months of wrestling with second hand twisted metal, we are pleased to report that John Dixon finally had the pleasure (or should that be satisfaction?) of seeing the new gas cylinder store completed, painted and erected. 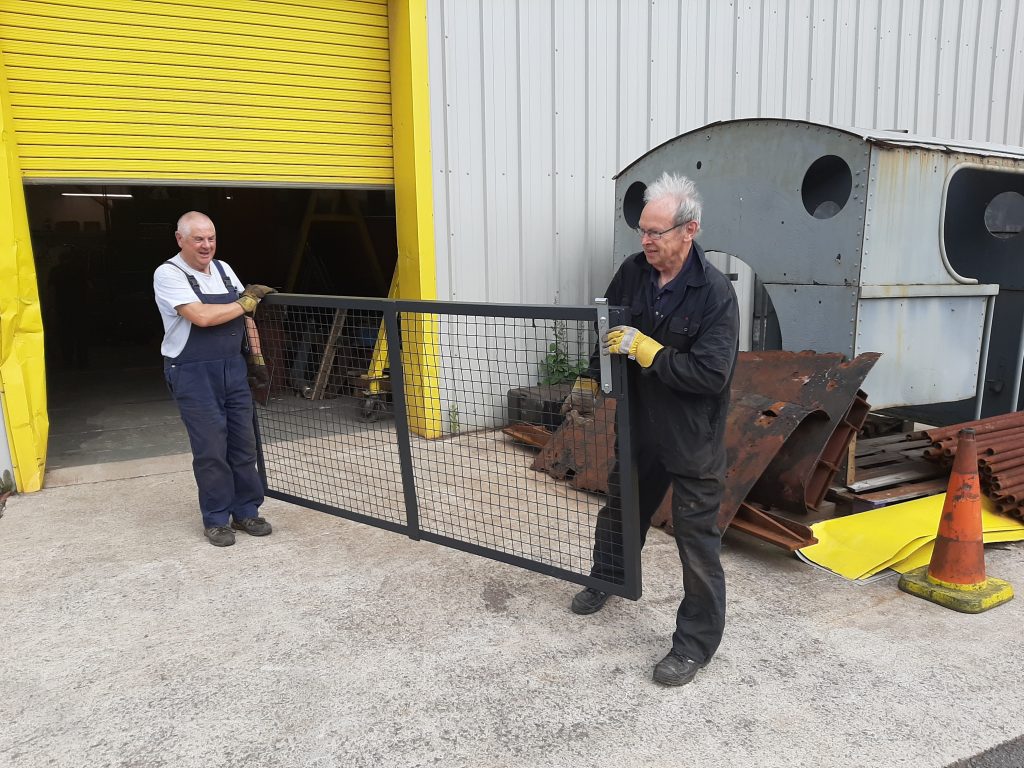 John Davis and John Dixon are seen moving the cage door into position. 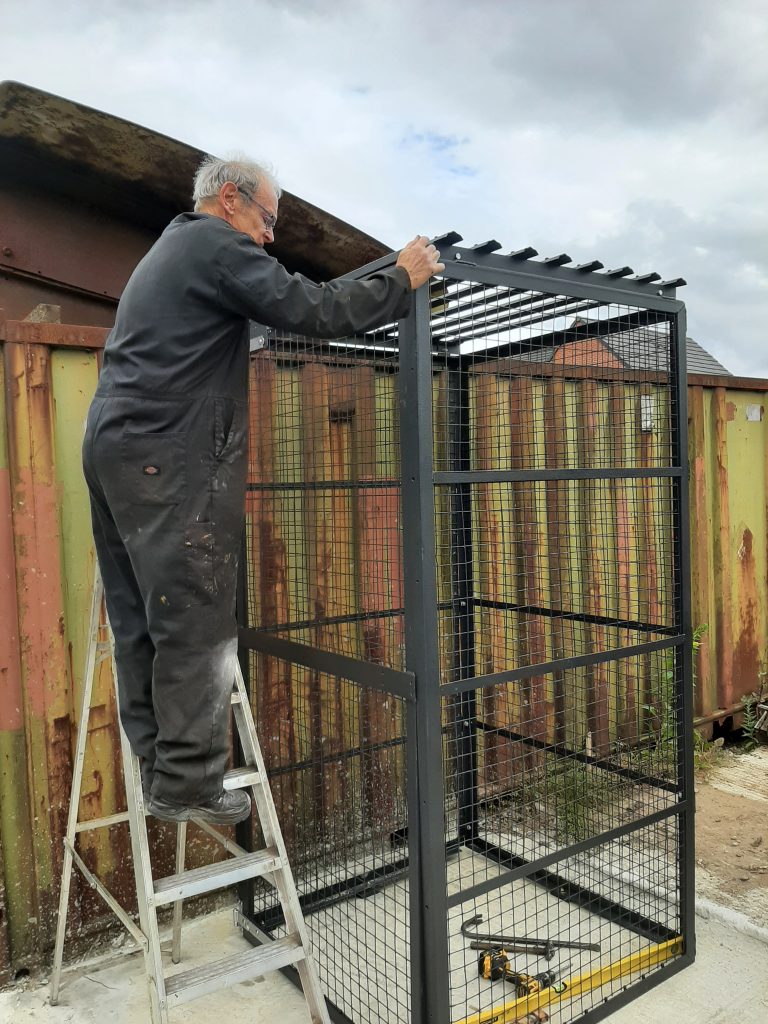 John Dixon makes the final adjustments to the cage. 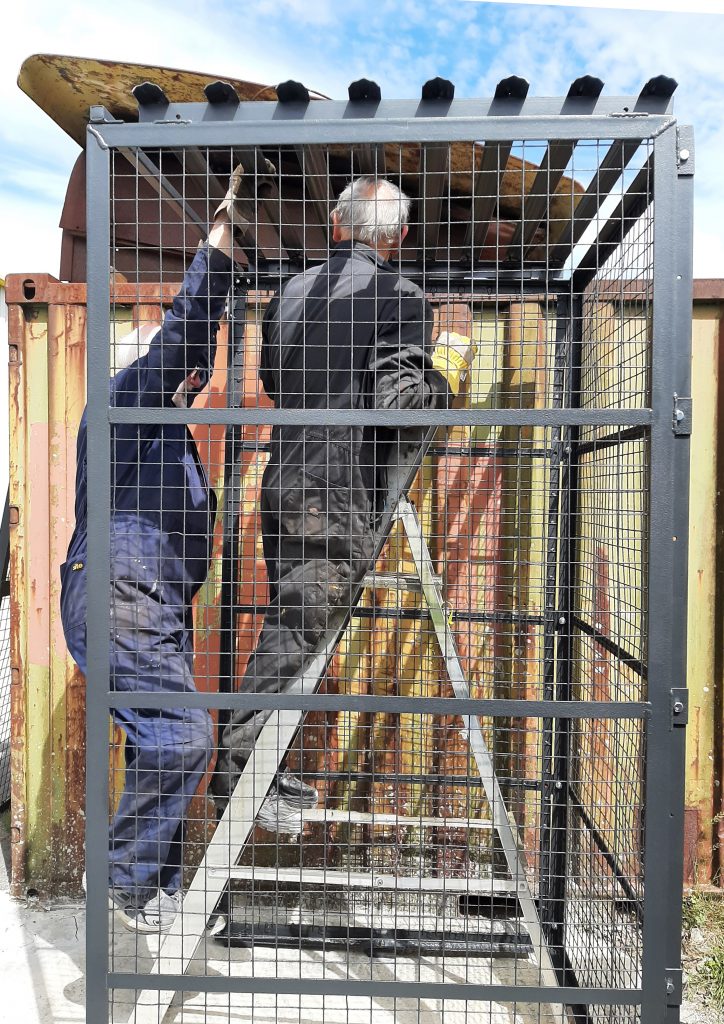 Inside the shed, John Davis and Phil Bell have lifted the first half of Fluff’s roof into place. John Davis is in Fluff’s cab whilst John Dixon (right) continues his work on the final two vents for the roof of Great Eastern Railway Royal Saloon No. 5. Matt Crabtree and Keith Brewer discuss progress on welding new steelwork on Wootton Hall’s tender. 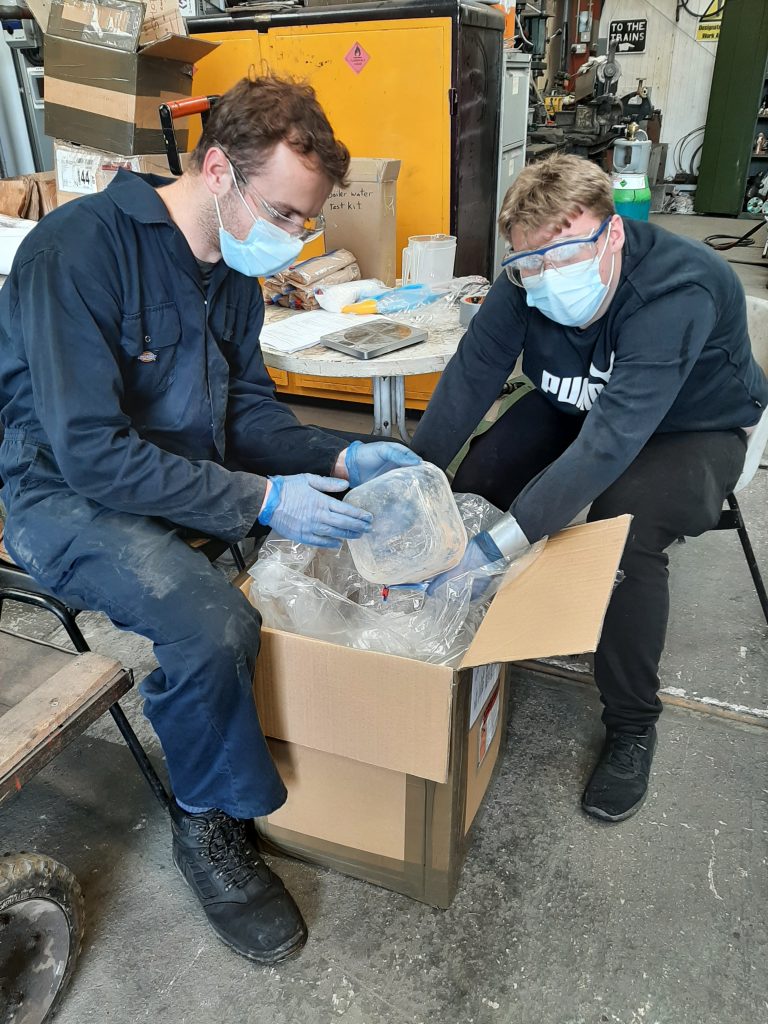 We were pleased to welcome Wilfie Pinch who has spent his first day working in the FRT shed. He is seen here with Sam preparing daily water treatment sachets for FR 20.

Finally, during Prime Day (which actually runs for two days!?!), tomorrow and Wednesday, Amazon is doubling donations on all eligible purchases made with AmazonSmile. That means if you buy during the 48-hour event using Amazon Smile you can get Amazon to donate to the Furness Railway Trust, at no expense to you, twice as much as usual!