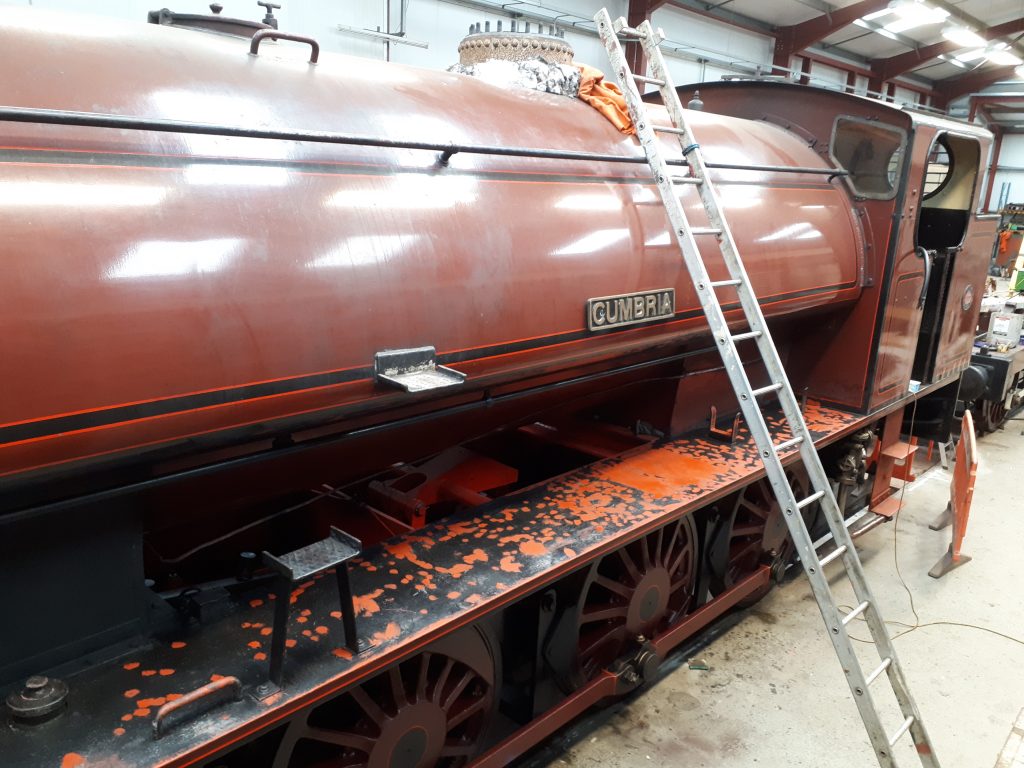 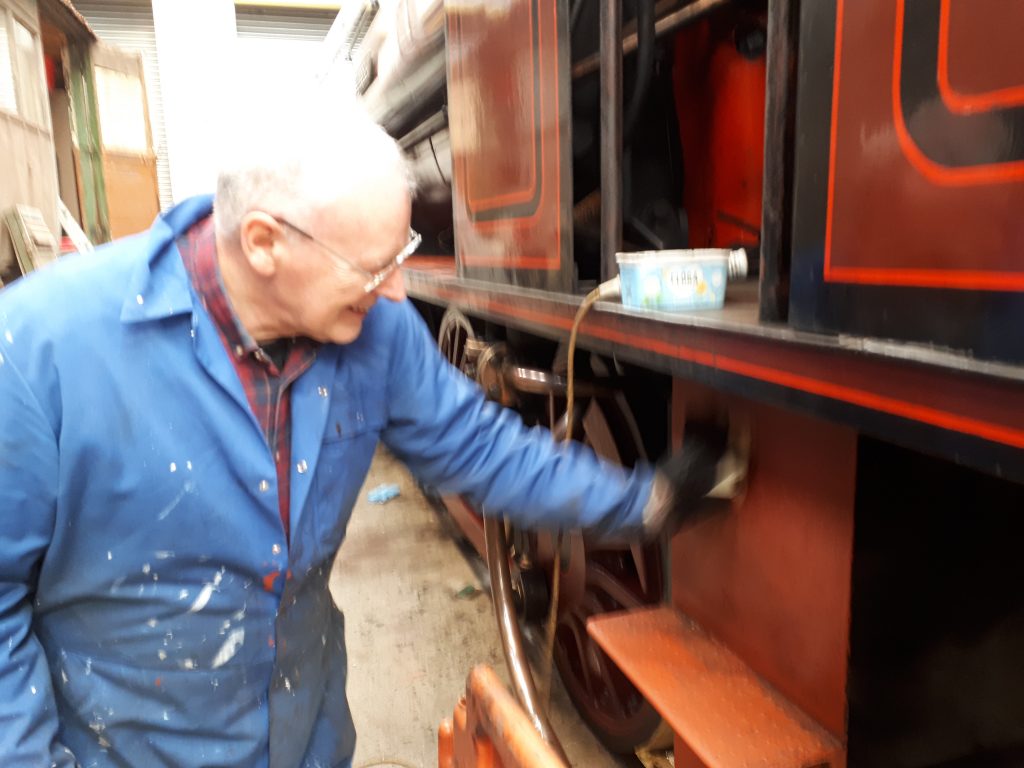 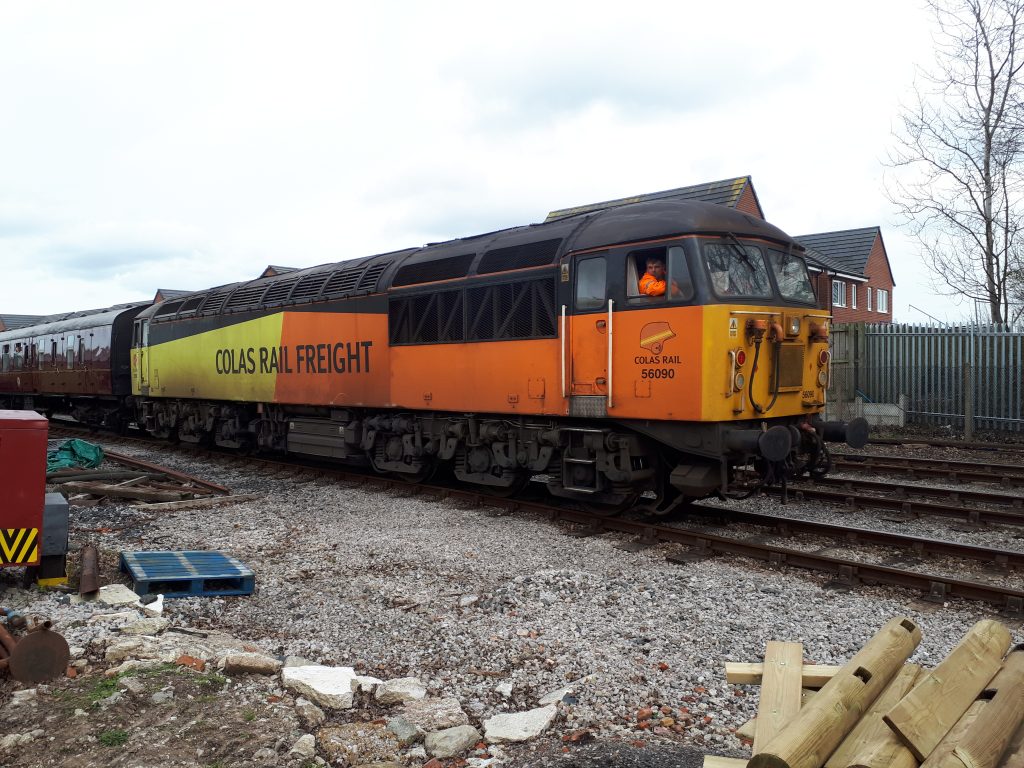 Bob and Tim spent last Wednesday and Friday with their noses literally to the grindstone as they strove to face up Cumbria‘s regulator valve with the ‘J’ pipe. Howard, with John Davis as apprentice, ran the surface grinder over the steel plate that had previously been cut by Keith to enable carborundum paste to be applied to the surfaces, having detected a bow in it. 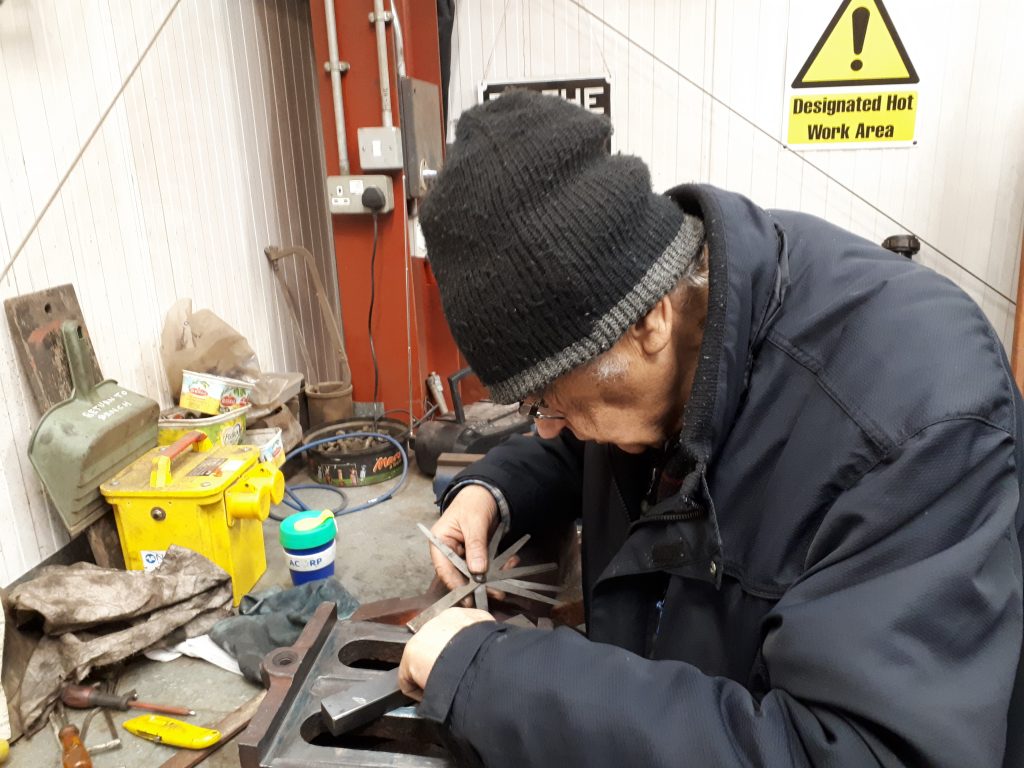 Bob is seen applying his feeler gauge to check test progress. By the end of Friday both the regulator valve and the ‘J’ pipe were deemed to be in much better shape although further work will be required this next week. In view of time pressures, Tim spent another day on the job today. 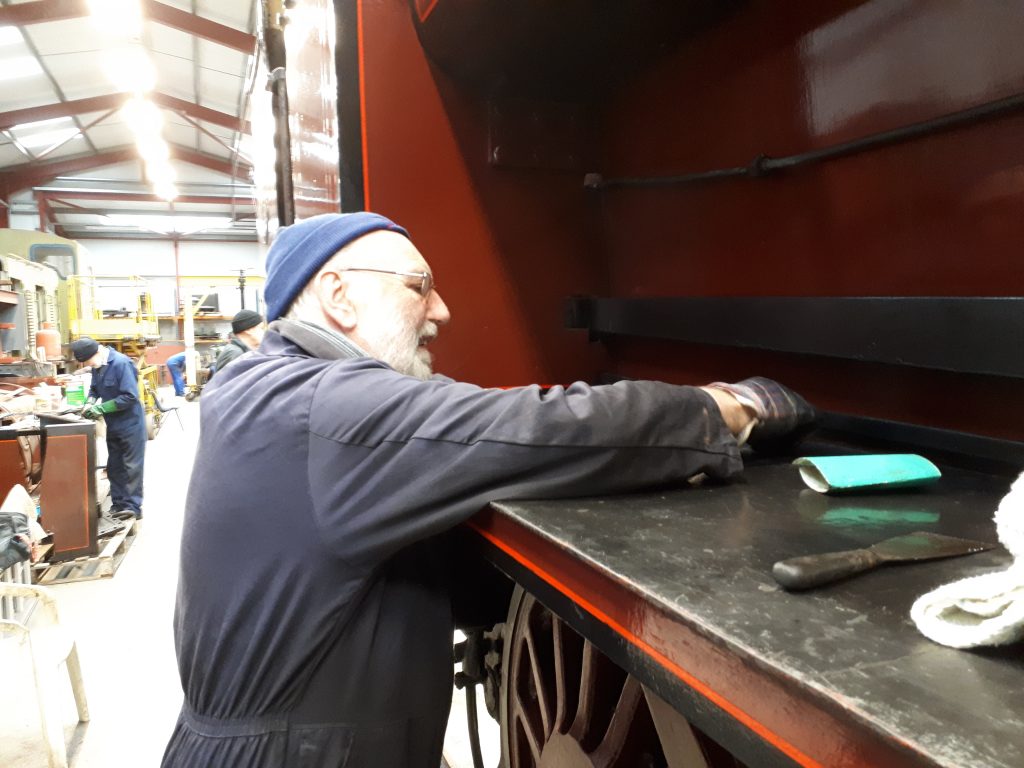 The spruce up of Cumbria has also continued apace, led by John Dixon and assisted by Phil Bell and Phil Scales. The running board is receiving a rub down with a view to giving it a fresh coat of black paint in the near future.

Turning to our other operational loco, Keith and Fred went to Embsay on Saturday to undertake a washout on 5643. Keith’s description of the weather is unprintable here, for both he and Fred got soaked to the skin. Fortunately, after having put the loco back into one piece, a fire was lit on Sunday and, at relatively low pressure, the newly fitted stays appeared satisfactory. Keith plans a further visit on Thursday to complete the fitting of firebox cladding before returning at the weekend to undertake a full steam test.

Adrian was been busy on FR 20’s heavy general overhaul on Wednesday where he removed the valve chest cover and split the right hand piston rod from the cross head. Ade has his eyes on splitting the left hand rod and cross head next week. This will then enable the pistons to be extracted for the piston rings to be changed. 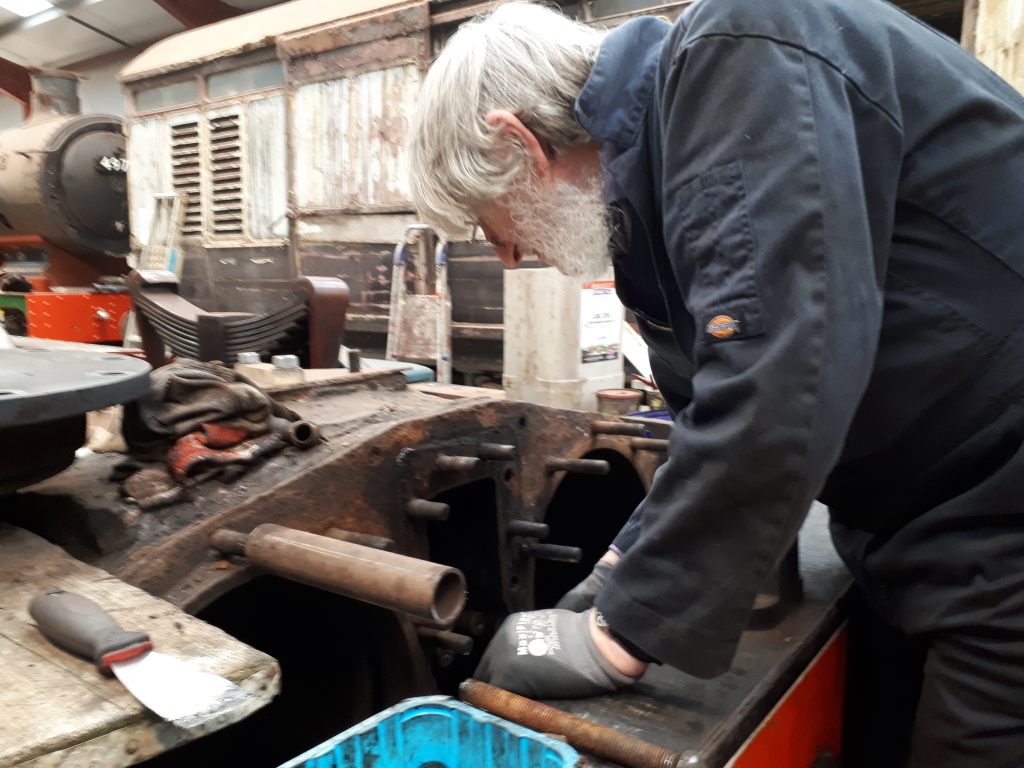 Alan is seen here on Friday inspecting the results of Ade’s endeavours. 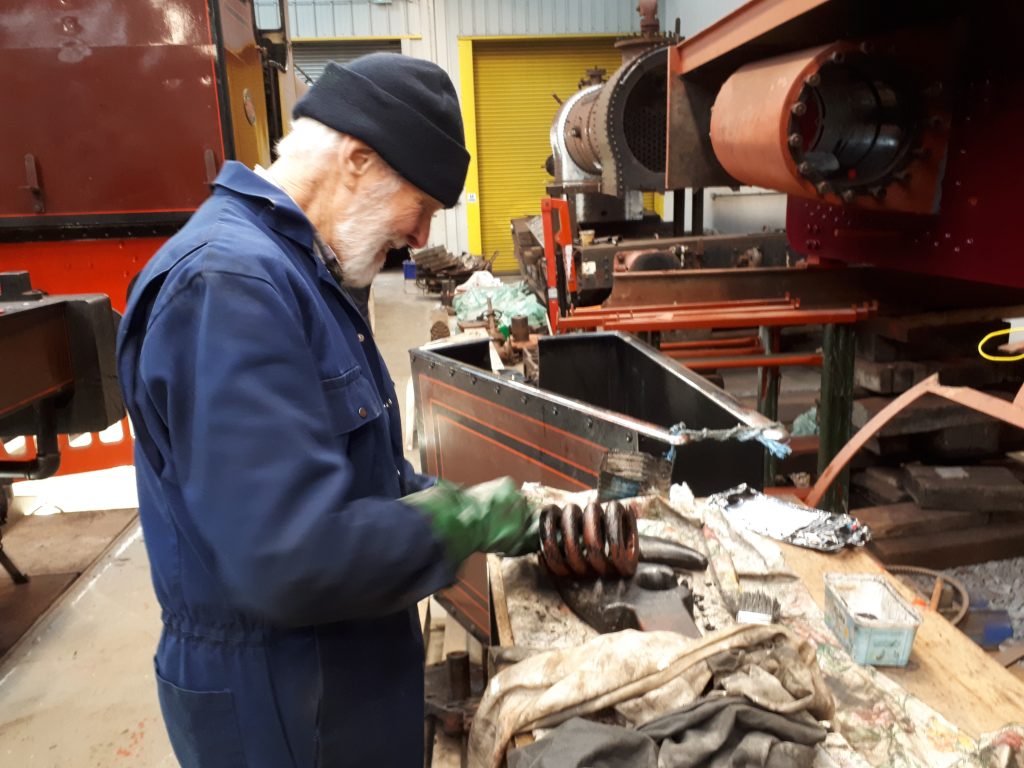 Keith has, as expected, been busy with Wootton Hall where he has connected up the rear vacuum pipe on the tender. 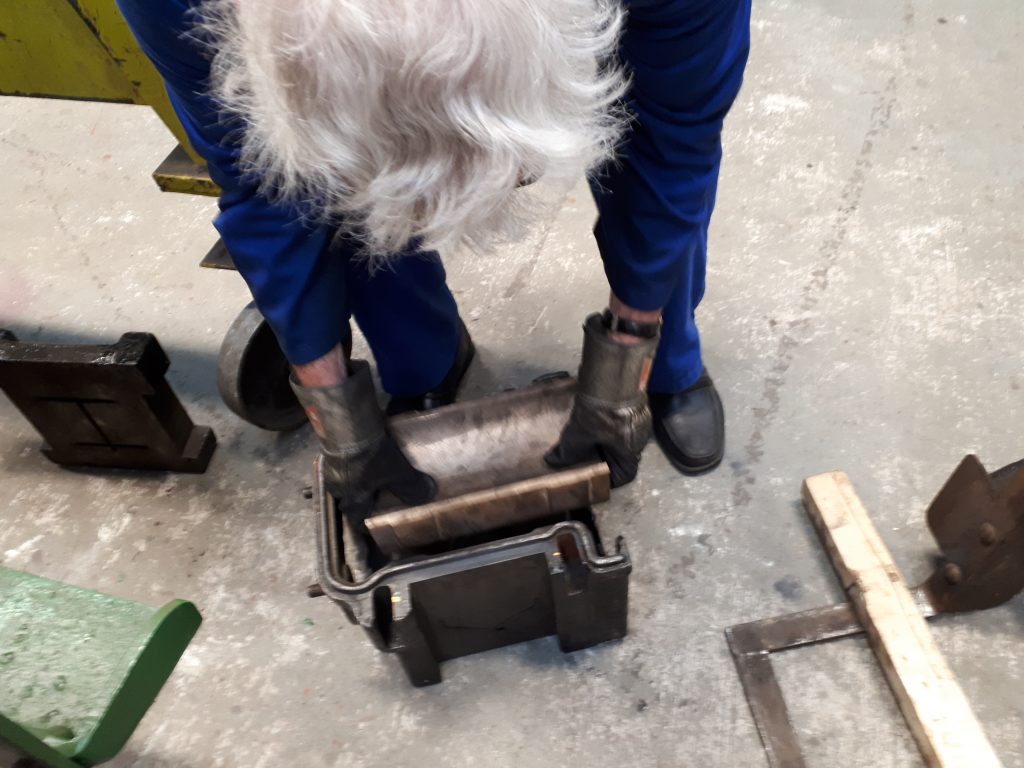 Bill Norcross has started the machining of the new axlebox brasses and completed the first successful fitting into an axlebox on Friday. 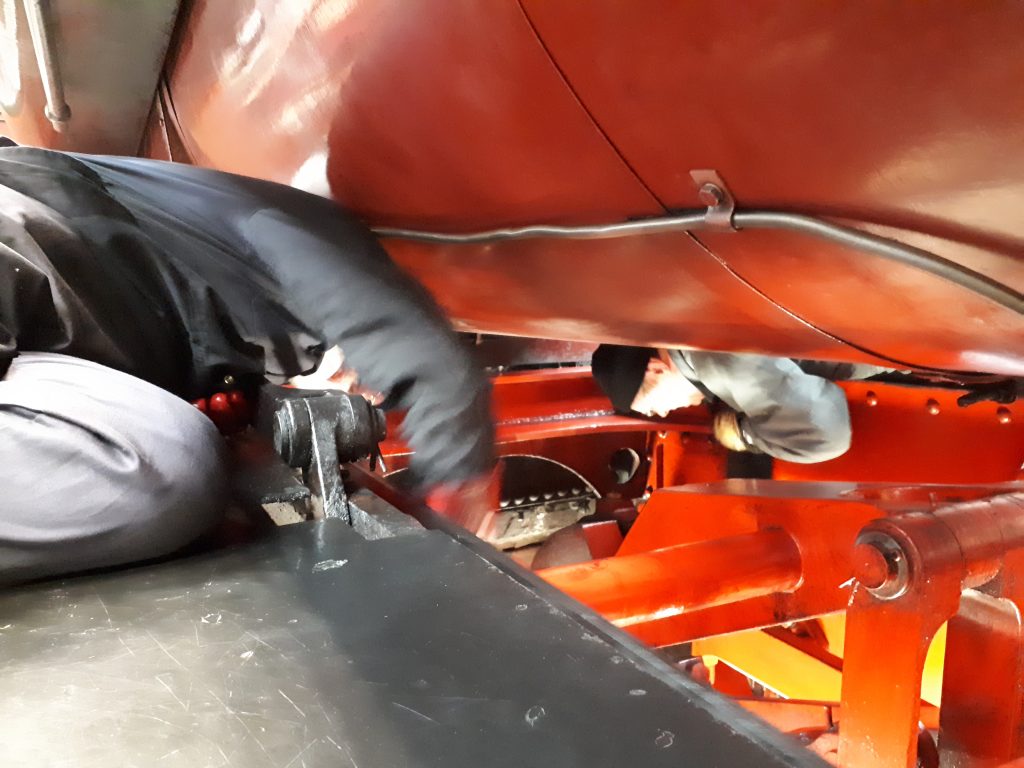 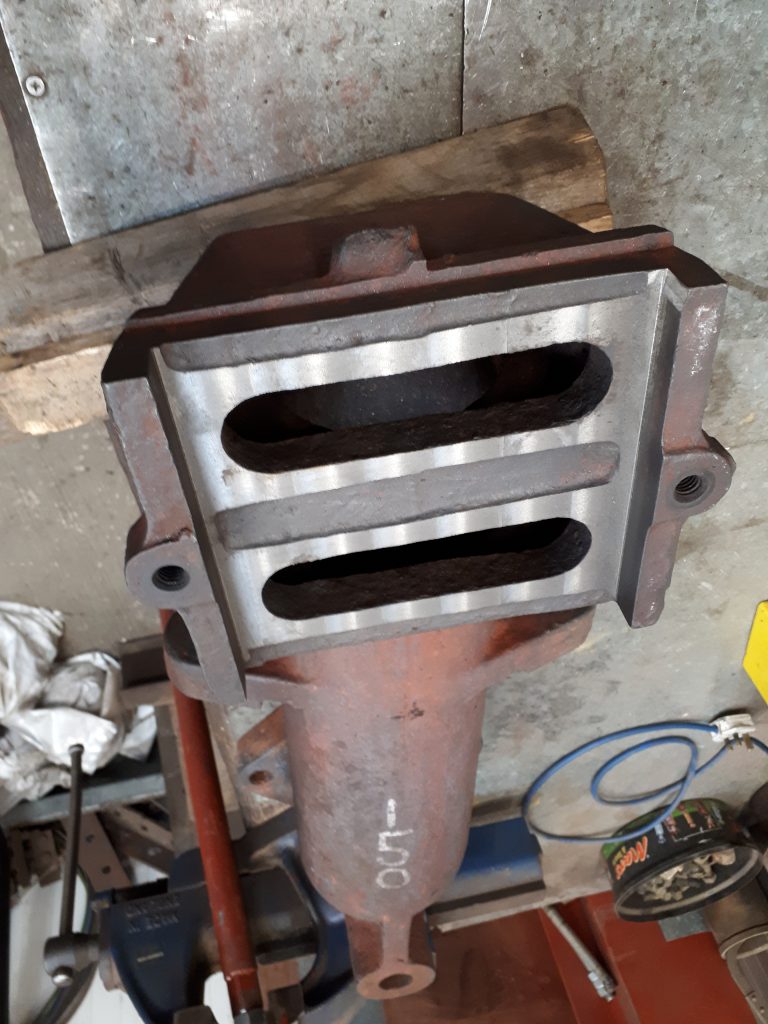 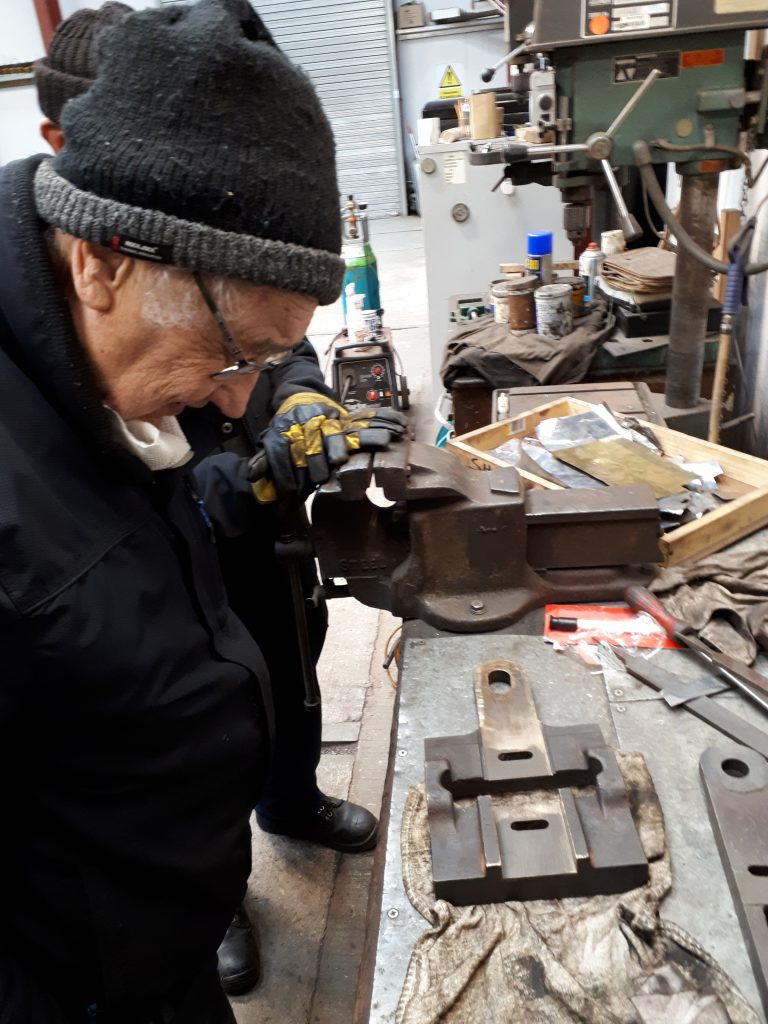 There may have been a fortnight’s gap in publishing a blog, but you can be assured that there has been plenty of work going on during that time. 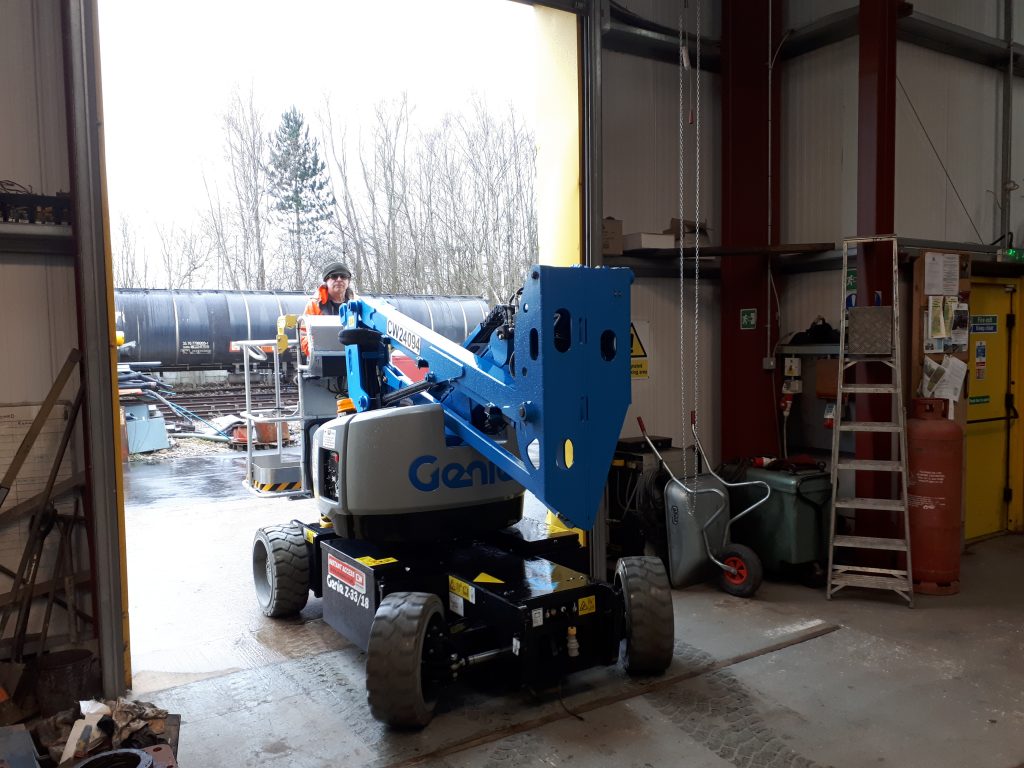 A major project completed has been the installation of the new overhead safety wire system on road three of both the heated and unheated sections of the FRT shed. Wednesday, 20th February was spent on moving various pieces of equipment out of the way and taking delivery of a cherry picker and tower scaffold for use of the installers. That didn’t stop Adrian getting a few instructions on how to operate the cherry picker in order that it could be stowed away safely overnight.

There was a very early start on Thursday, 21st February as the rolling stock on road three had to be removed by 8 o’clock so as not to delay the installation process. Adrian, Mike, John Dixon and Tim duly appeared in good time for this to happen. Diesel shunter Stanlow No. 4 had been moved around to the Ribble Rail shed the previous day in readiness for the early start. 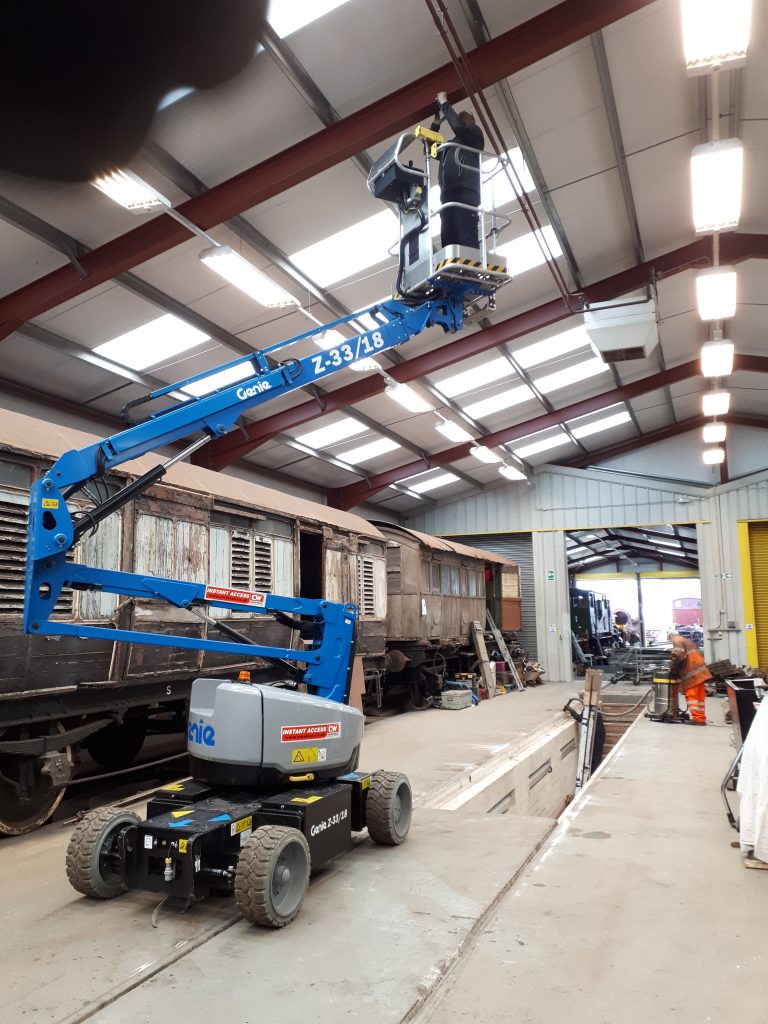 Fortunately, despite a short power outage, work progressed steadily during the day. 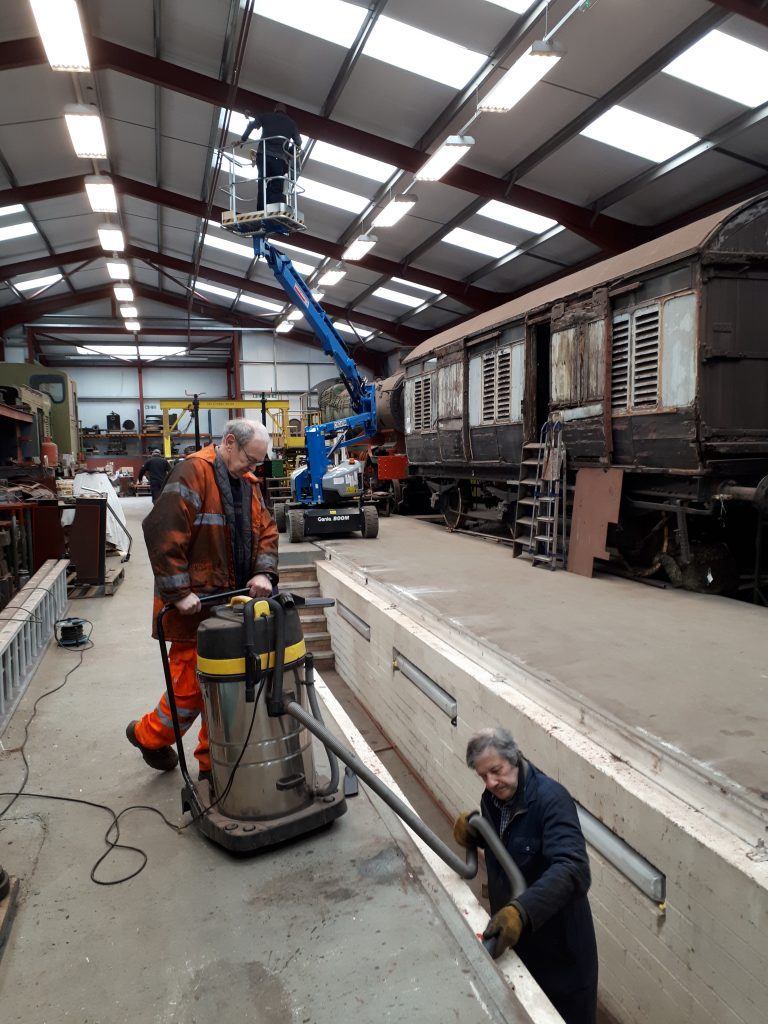 With the rolling stock now out of the way, the opportunity was also taken to undertake a thorough clean of the central section of the shed including the pit. 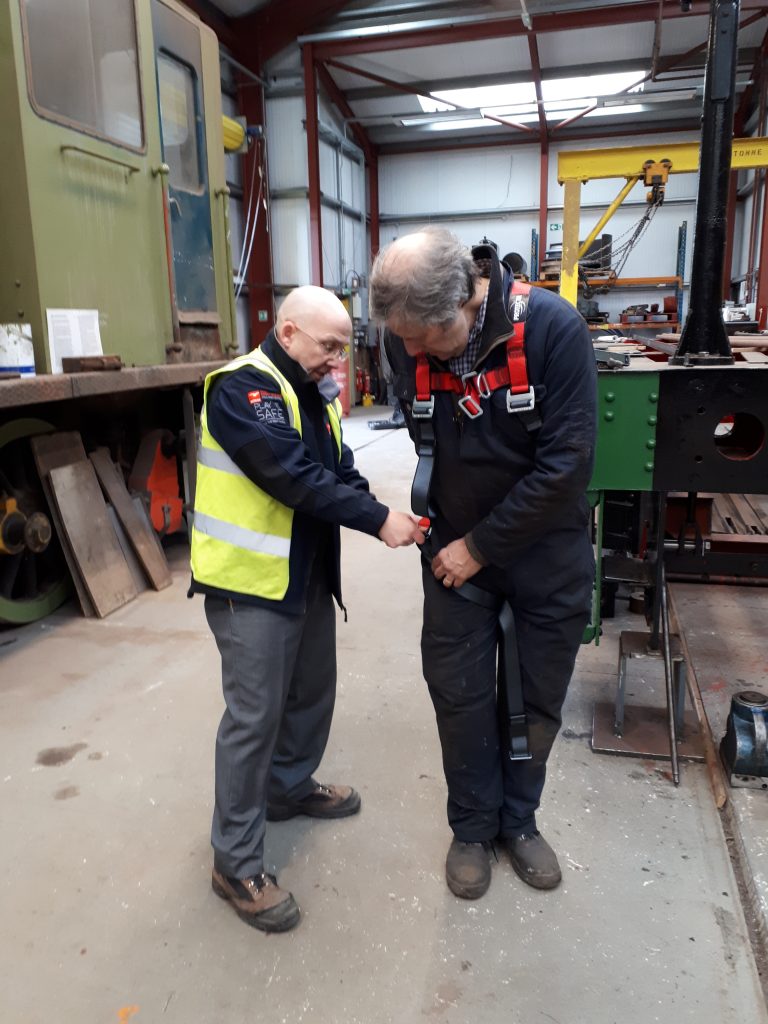 Mike Rigg volunteered to try on one of the new harnesses and is seen here getting rigged up (geddit?!) with the assistance of Joe Jackson from Trad Safety Systems. 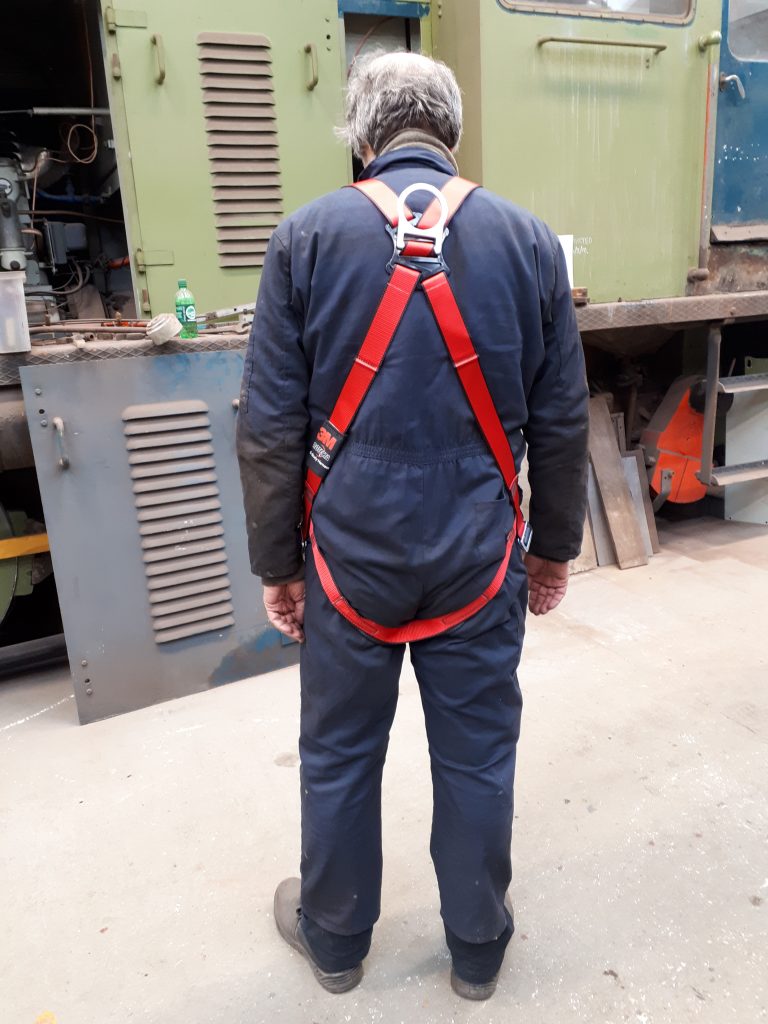 A rear view of Mike shows the correct position, between the shoulder blades, for the metal loop to which the back strap should be attached. The installers finished a little later than planned, but all the rolling stock was back in the shed by 17.30 and Stanlow moved back home to the main running shed.  A full operating instruction for the overhead safety wire system has been written and is available both in the mess room and in the harness storage drawer in the shed filing cabinet. 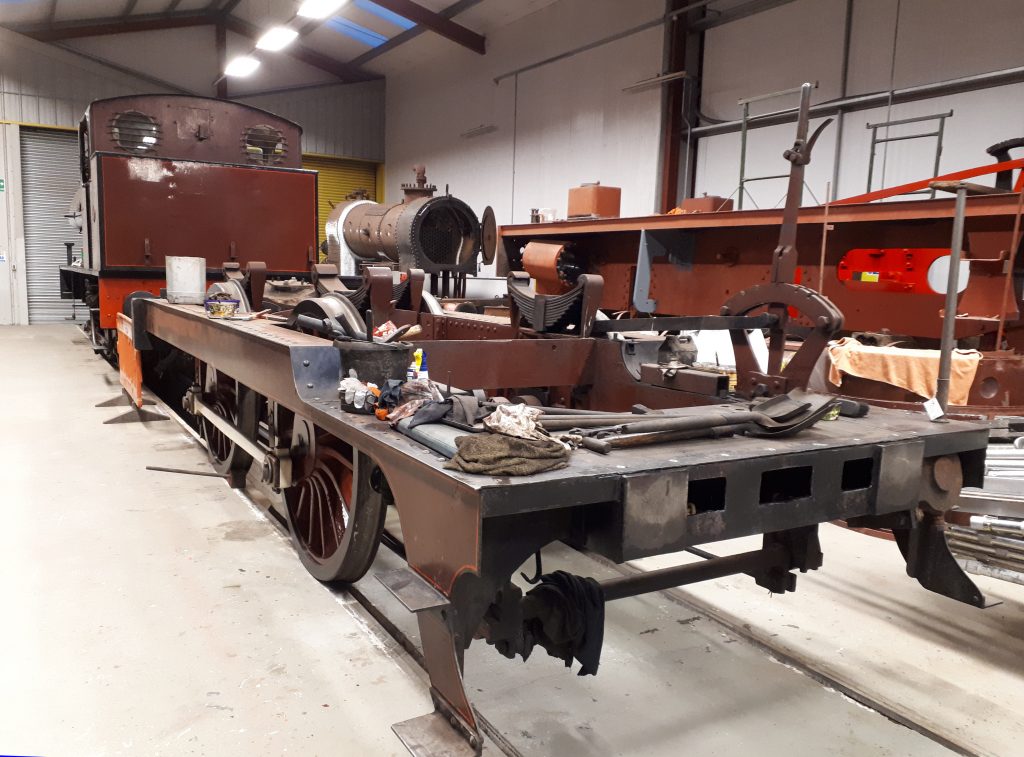 One side benefit from the upheaval in the shed was the opportunity to re-marshal the rolling stock so that Cumbria and FR 20 could be positioned over the pit to assist maintenance and repairs.

Meanwhile, we have been keeping Matt Jervis busy as he and Keith paid a visit to Embsay last Tuesday to remove three stays from 5643’s firebox backhead for replacement. A further visit is planned shortly to ream and tap out the holes after which new stays will be ordered. Matt has also been involved with the removal of Cumbria‘s regulator valve and ‘J’ pipe. The worn faces on the ‘J’ pipe are a clear indication of the cause of the passing of steam whilst the regulator has supposedly been shut.

With Cumbria now more accessible over the pit, more hours have been spent in removing a build up of oily dirt from the frames, brake rigging and motion. Although there will be more to do in the coming weeks, there has already been a vast improvement in the state of the loco. 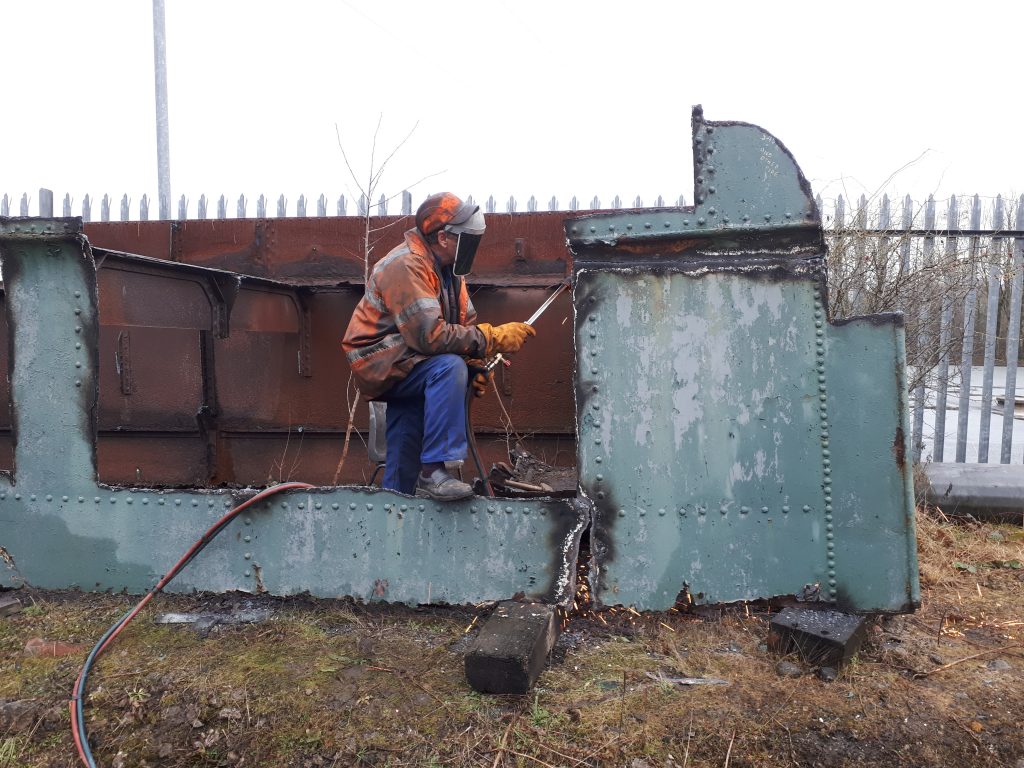 Outside, Keith has been busy on repairs to the newly acquired tender tank for Wootton Hall and also in cutting up the original which, unfortunately, was well past being repaired. Alan has been loosening nuts with a view to removing FR 20’s valve chest cover and Adrian has been undercoating Caliban‘s frames. Work on Fluff progresses as well.