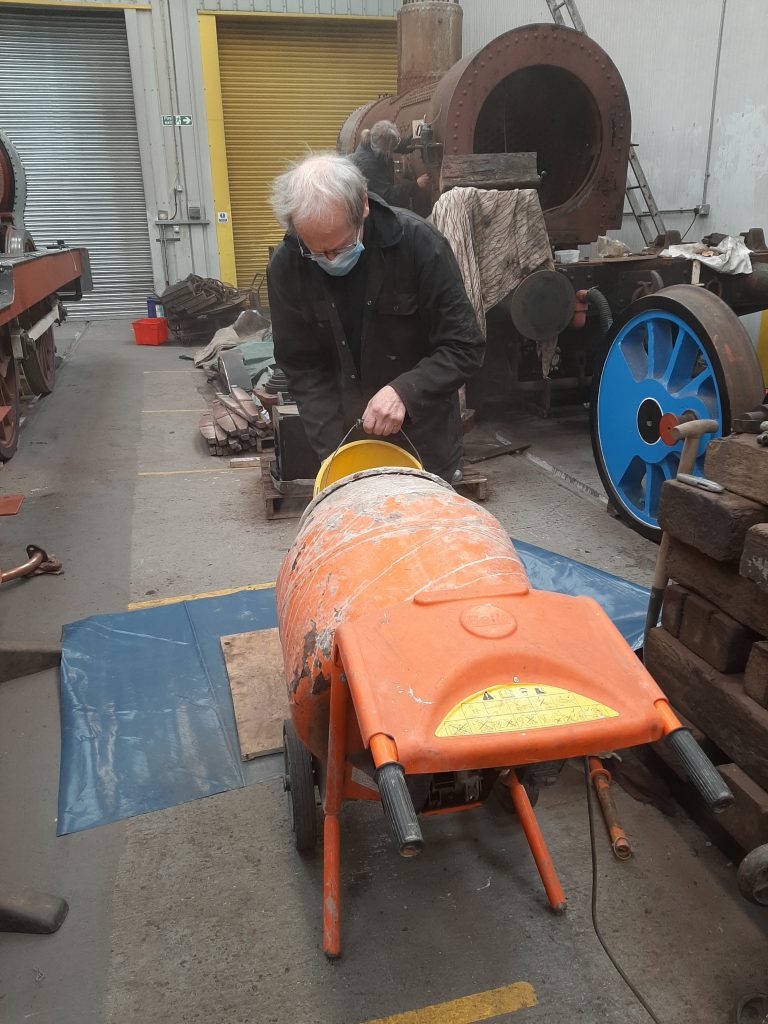 The work on FR 20’s overhaul continued this last week with the casting of a new brick arch. As Tim had successfully cast the previous two arches in the confined spaces of the locomotive’s firebox it was deemed that he should go for the hat trick. John duly supplied the concrete and, six bags of concrete later, the task was completed. Let’s hope that all is well when the formers are removed! 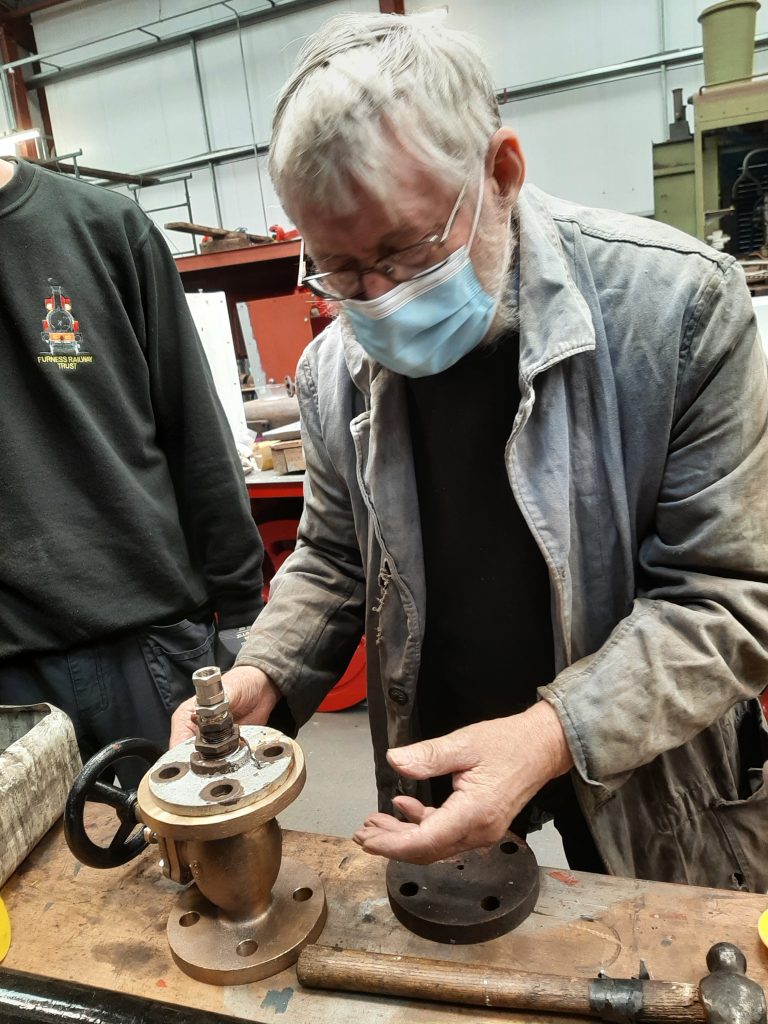 The new replacement steam valves for the injectors have now arrived and Alan is seen here sizing up how they are going to be fitted. The previous steam valves had to be opened to their maximum to get the injectors to work and experience had shown them to have a limited life span  if not handled gently. 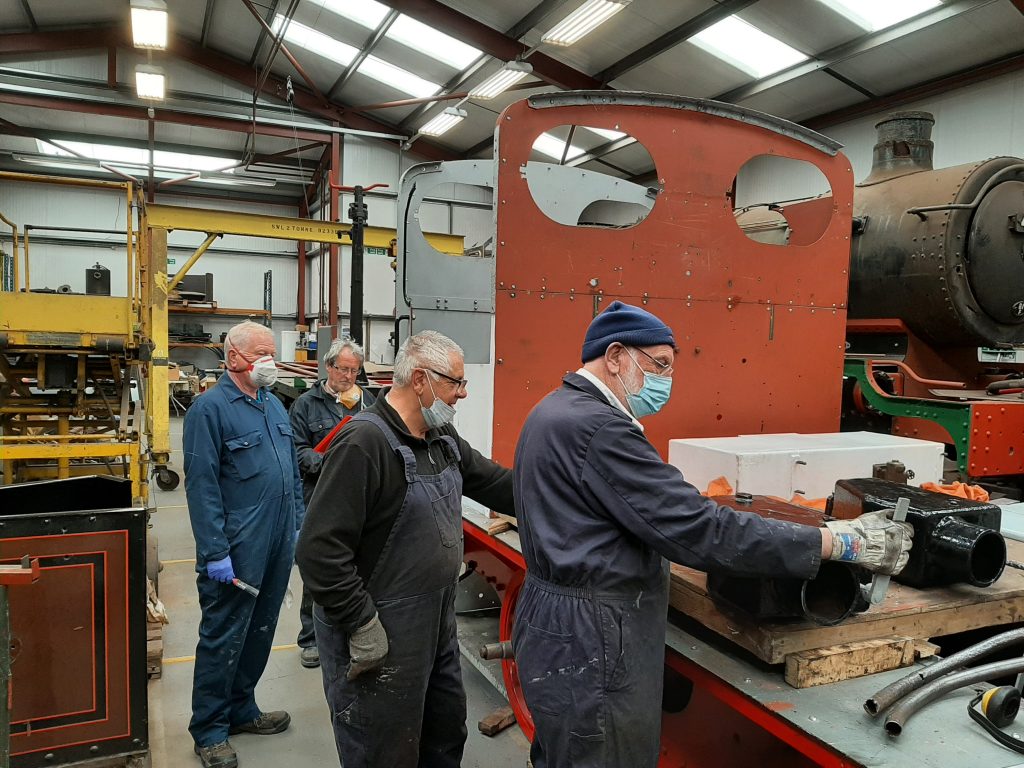 We have been pleased to welcome back Roger Benbow, Paul Balshaw and Phil Bell after their respective periods of absence. Roger and Fred worked on the former Furness Railway water crane last Friday whilst the full Fluff team of Paul Newton, Paul Balshaw, John Davis and Phil Bell were back in action last Wednesday.

Finally, there was good news from the East Lancashire Railway where 5643 passed its 14 month steam test last Wednesday and is now ready for the ELR’s operating season. 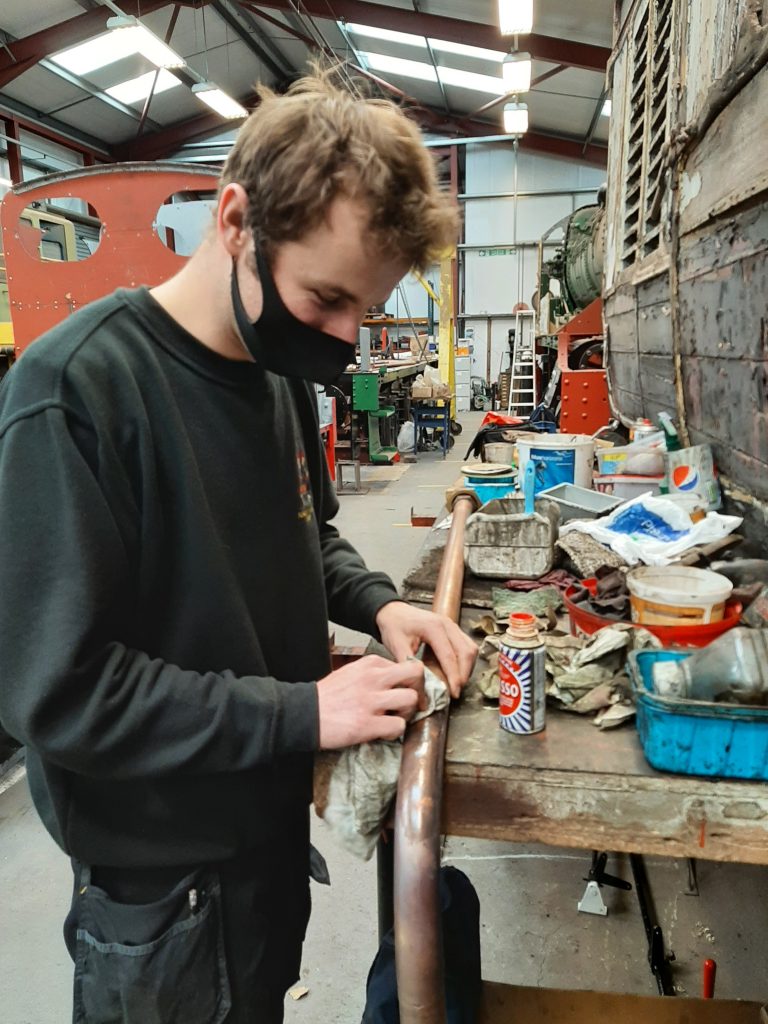 With Alan allocating his time on Wednesday to dressing up for filming for the RSR’s new web site, Sam took on board polishing the copper pipework that had been annealed the previous week. 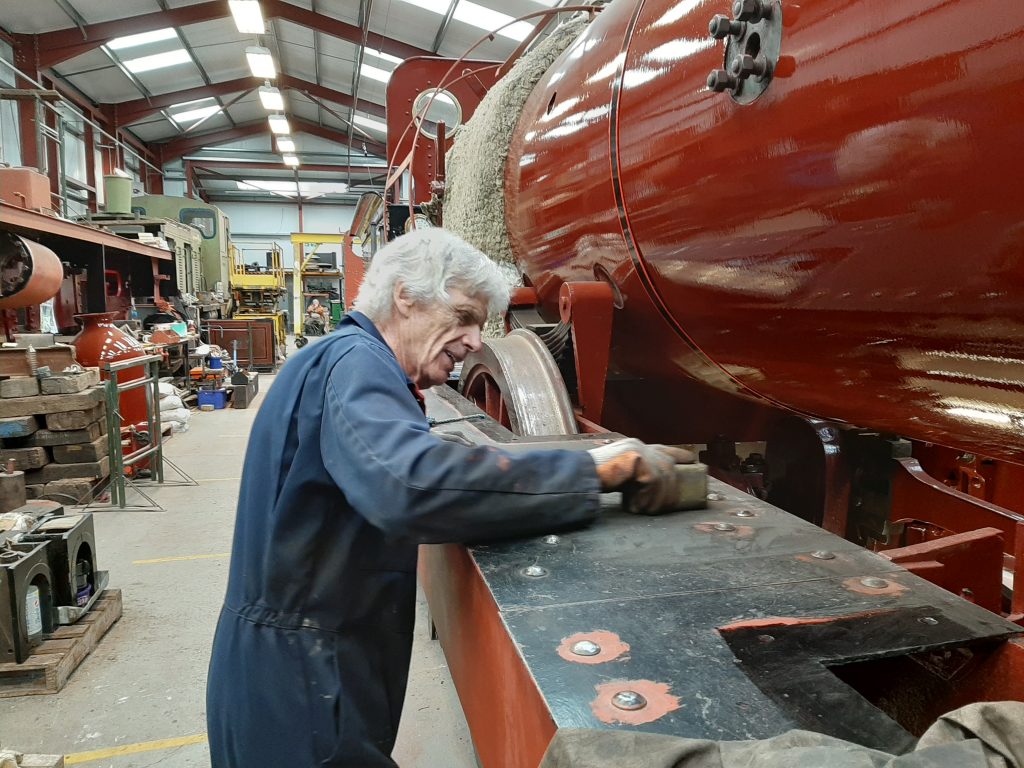 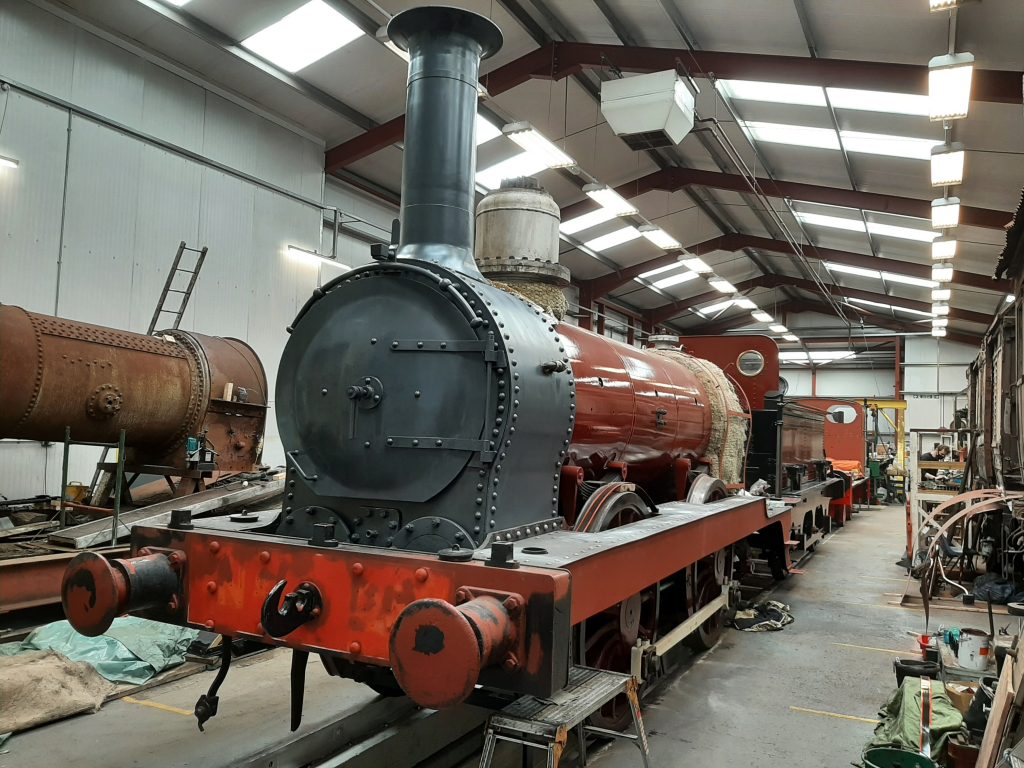 John Dixon continued his work on the formers for FR 20’s new brick arch, which hopefully will be cast this next week, while Tim smartened up FR 20’s smokebox, chimney and lower front end with a coat of grey undercoat. 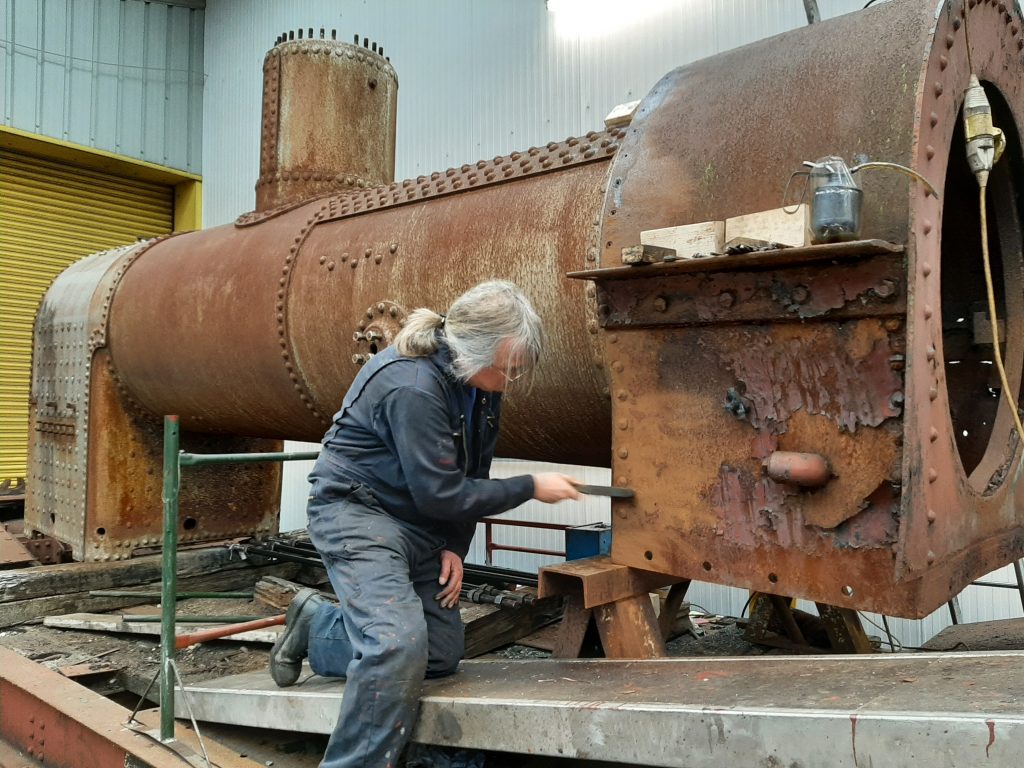 Ade was seen giving Caliban‘s smokebox a tidy up with a wire brush. 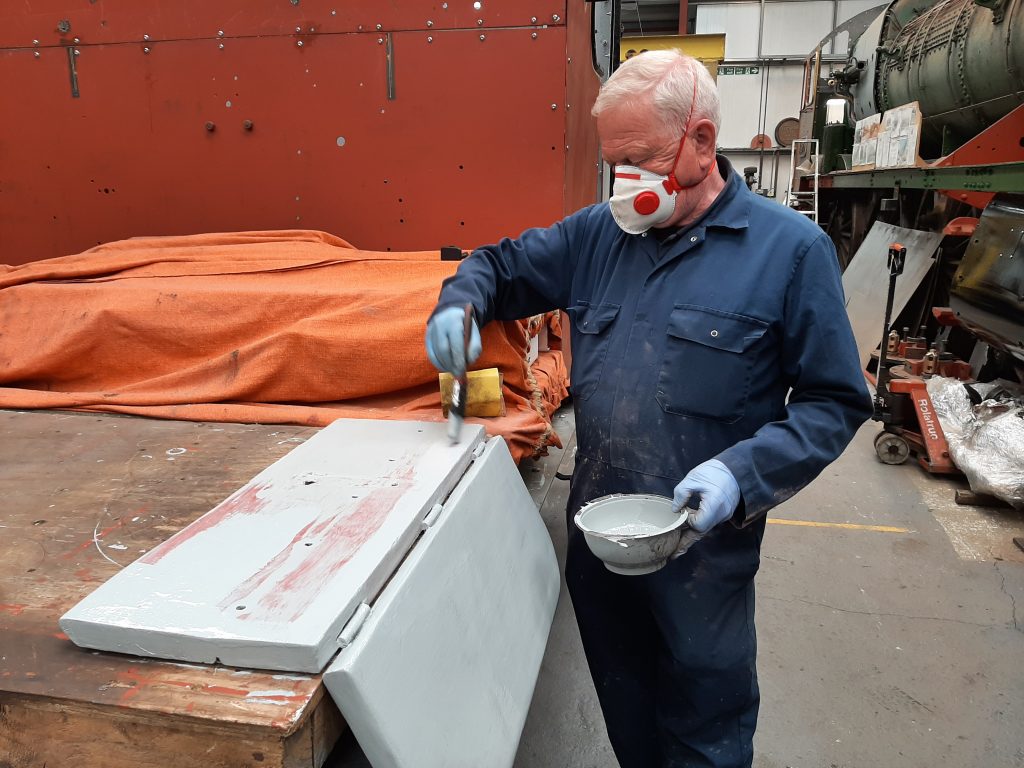 Paul Newton returned from giving assistance to the vaccination process to refurbish a cab seat from Fluff.

Tonight sees the Trustees meeting virtually to ponder over the 2020 accounts which David has prepared  and to review the draft Trustees’ Annual Report. With a mighty 17 items on the agenda let’s hope that everyone makes it to bed well before midnight! 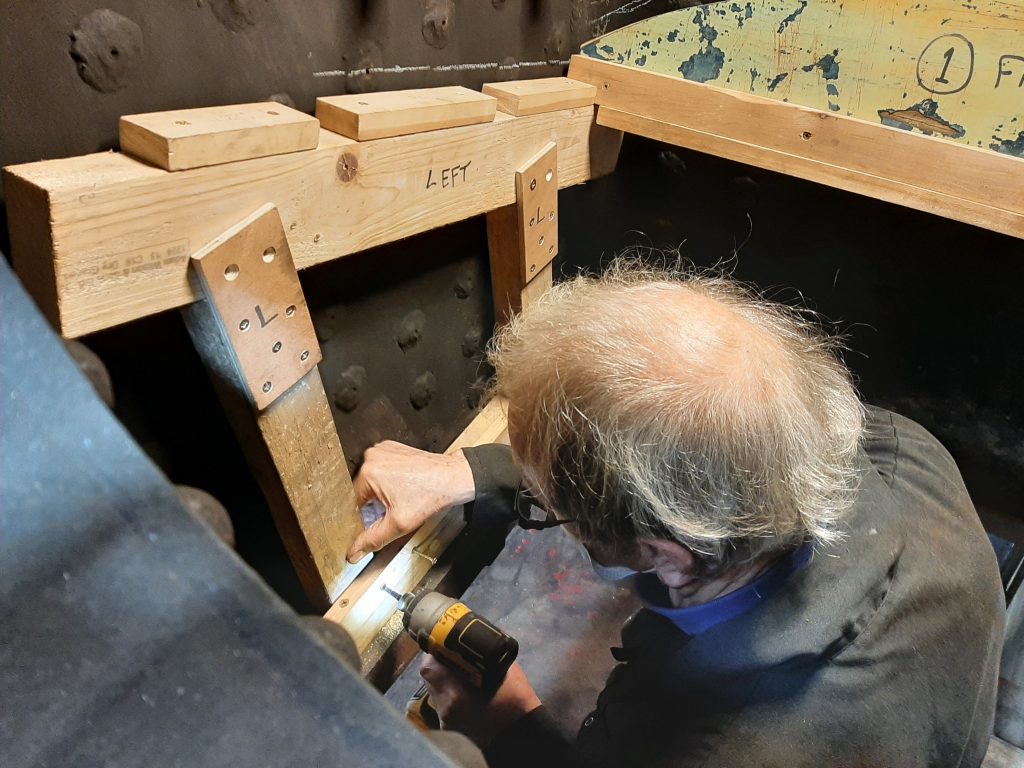 We are heading towards the casting of a new brick arch for FR 20 with John Dixon now in the final stages of constructing the formers in the confined space of the fire box. 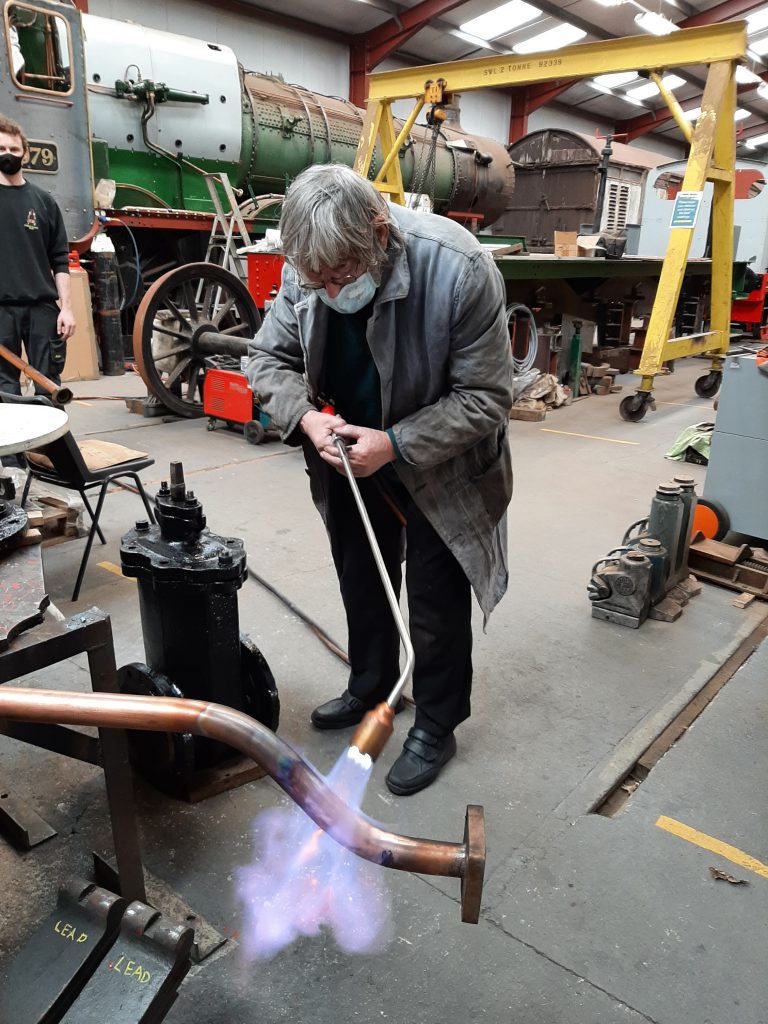 With the injectors now fitted, Alan has been annealing the copper steam pipework that now needs to be connected. Meanwhile Ed has continued his work cleaning up the chimney. 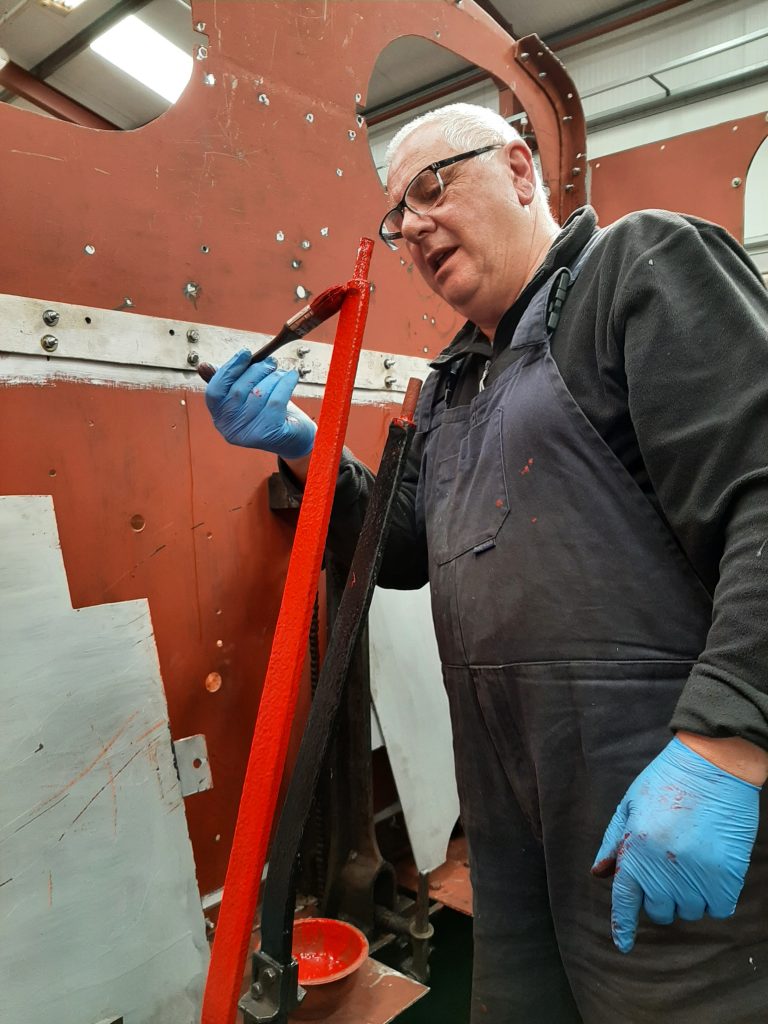 John Davis has been painting the controls in Fluff‘s cab. 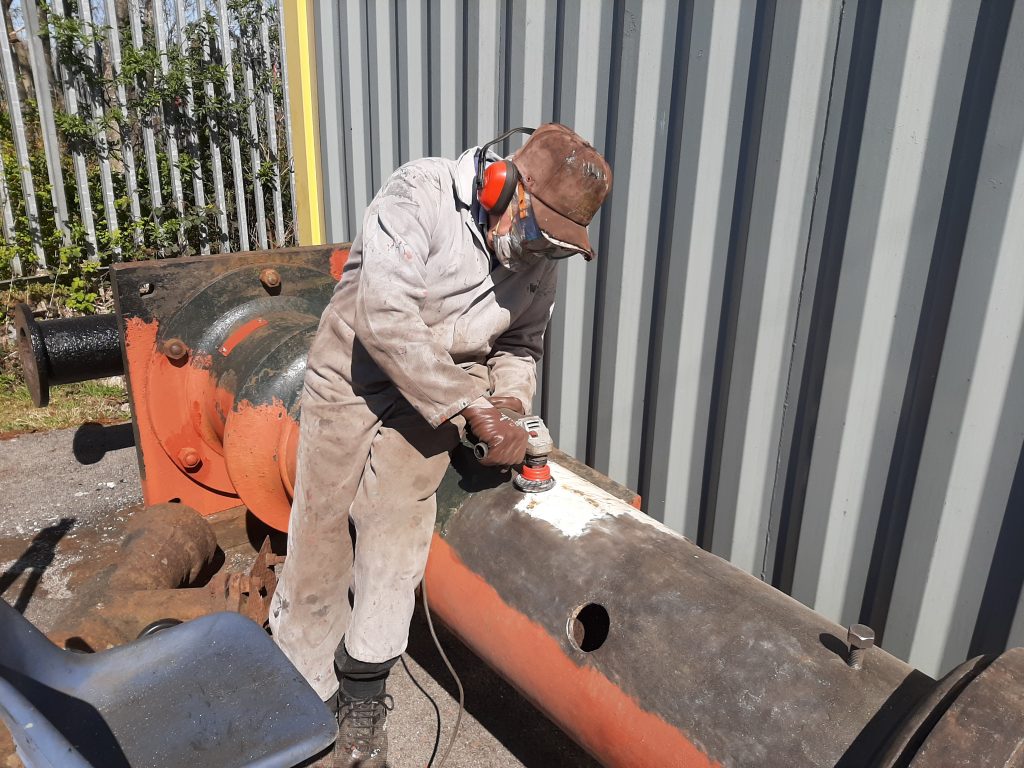 Fred has been back in action after the lockdown break and has been cleaning up the former Furness Railway water crane from Foxfield. Needless to say, it didn’t take him long to wear out his first cup wire brush of the year! 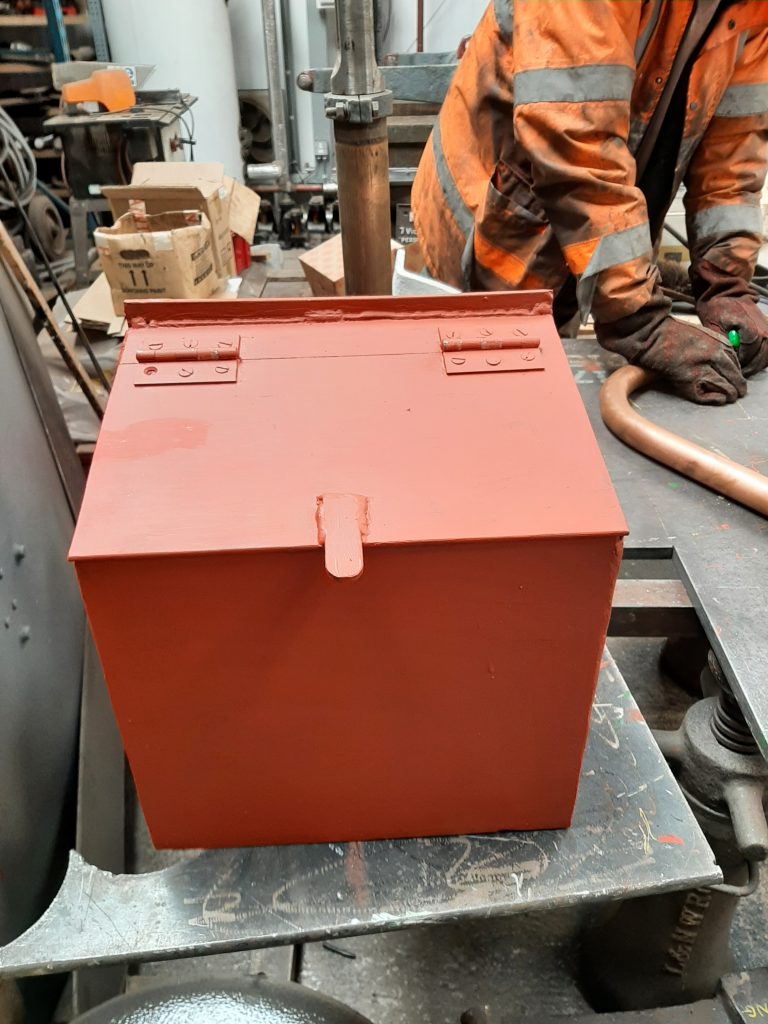 Meanwhile Keith has finished fabricating a new fire box for the water crane. 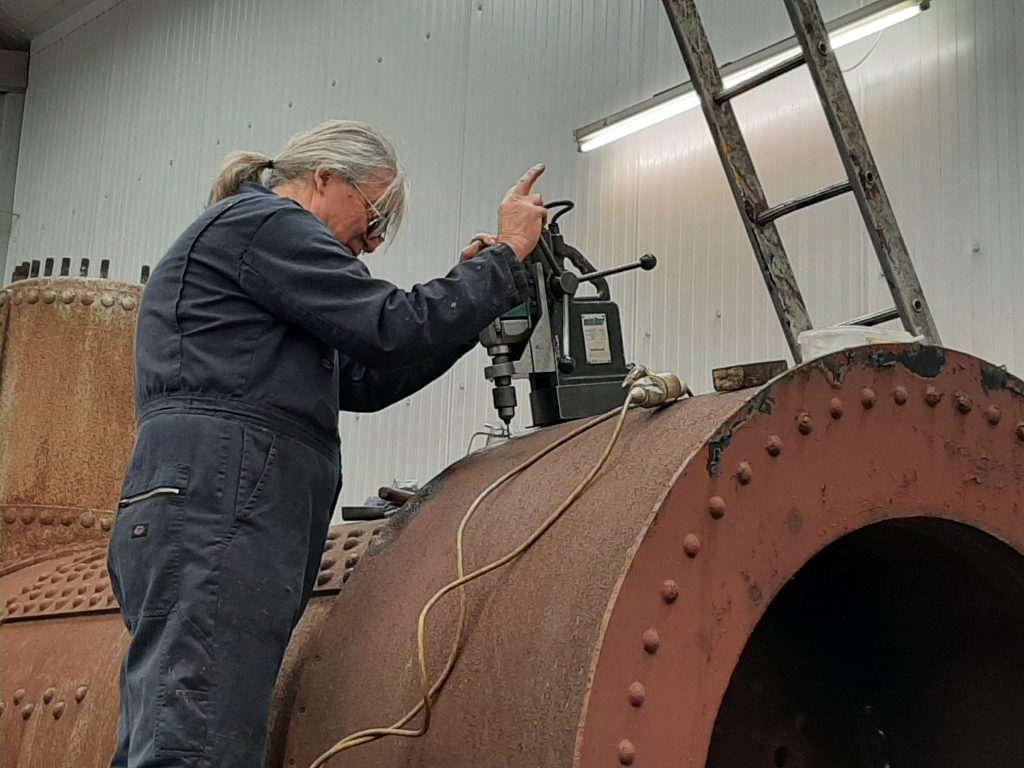 And finally, Ade has continued to drill out out the rivets on Caliban‘s smokebox to allow it to be removed.

This last week saw the start of a gradual return to normality with the lifting of the ‘stay at home’ restriction and the welcome reappearance of some of our working members. Paul Balshaw and Fred both popped their heads into the FRT shed to say hello and to apologise for a further delay in their return due to injuries sustained during lockdown – just what had they been doing? However, both Mike Rigg and John Davis appeared on Friday with intent to do some work, although Mike’s time with us in the shed was limited owing to having to be careful after a spell in main works. We hear that Phil is also likely to return shortly after having spent time at home in a caring capacity, but Paul Newton (whose professional career was in health) is currently doing a sterling job in assisting with the vaccination programme – well done, Paul!

So, what have those who are fit and well been up to this week? 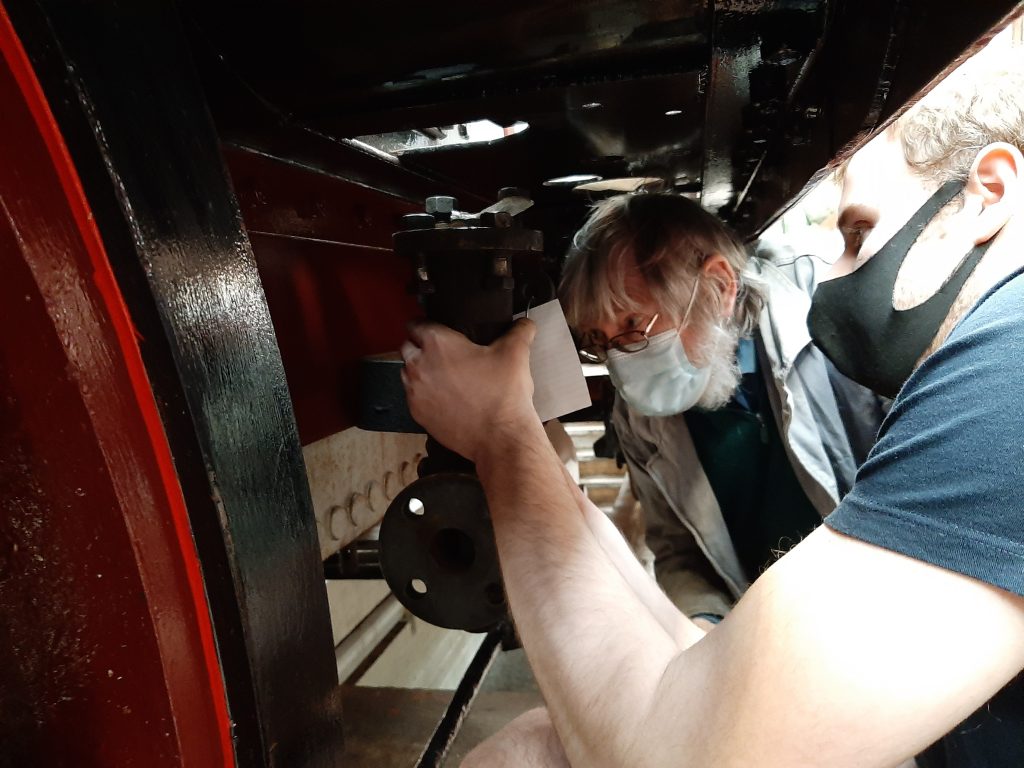 Sam and Alan (grandson and granddad) spent time making up joints (steam joints, that is!) and test fitting injectors on FR 20. 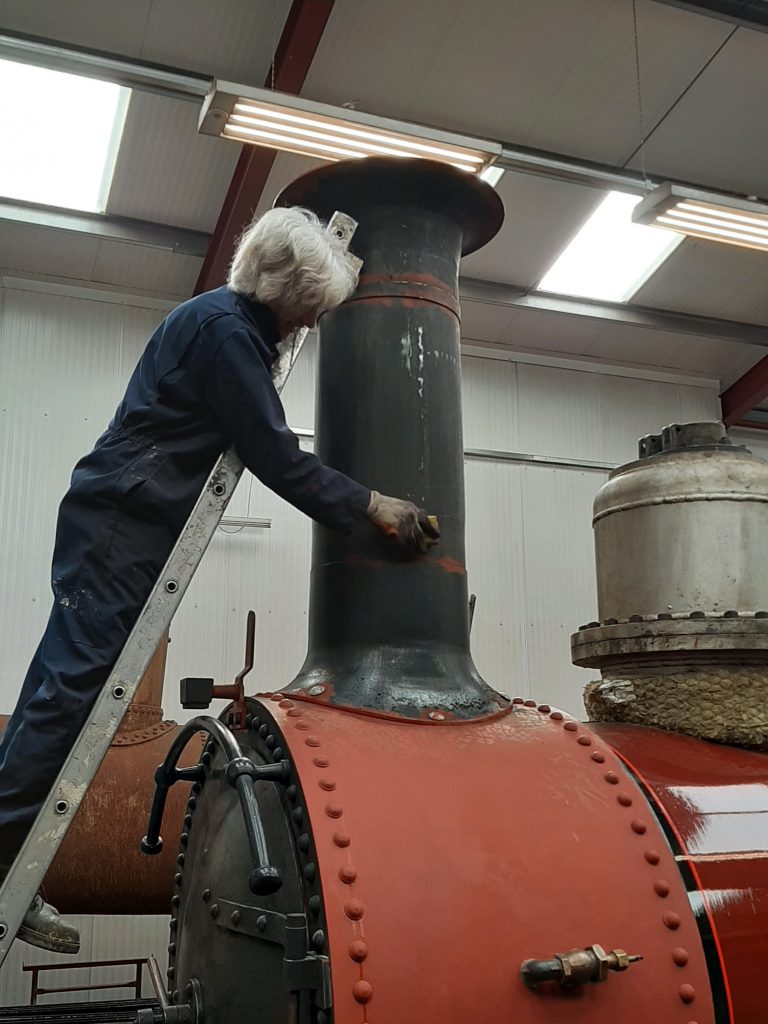 Ed has been cleaning and rubbing down FR 20’s chimney. 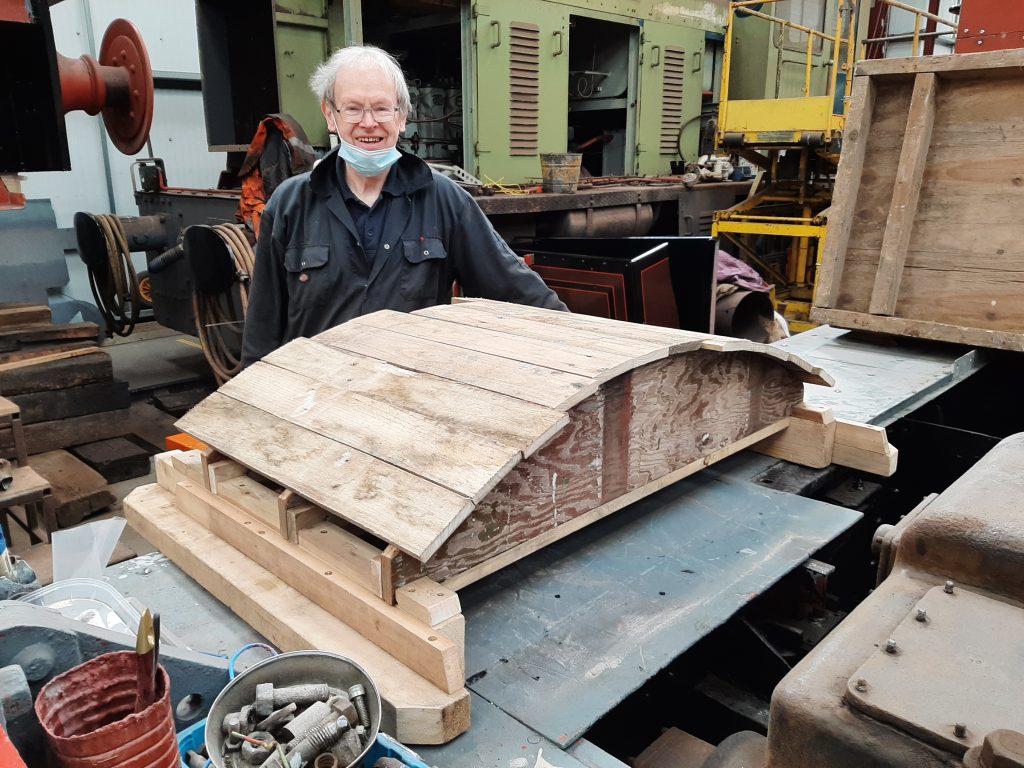 John has nearly completed the formers for the construction of FR 20’s new brick arch. 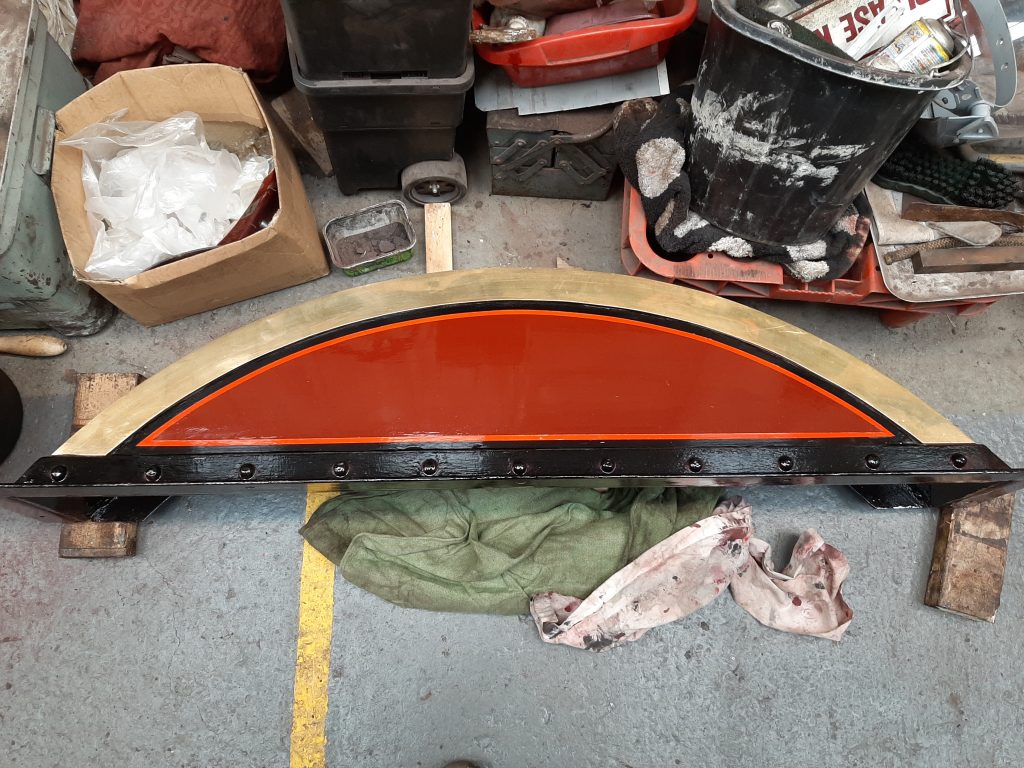 Tim has completed the lining out  of FR 20’s splashers, which are now ready for fitting. 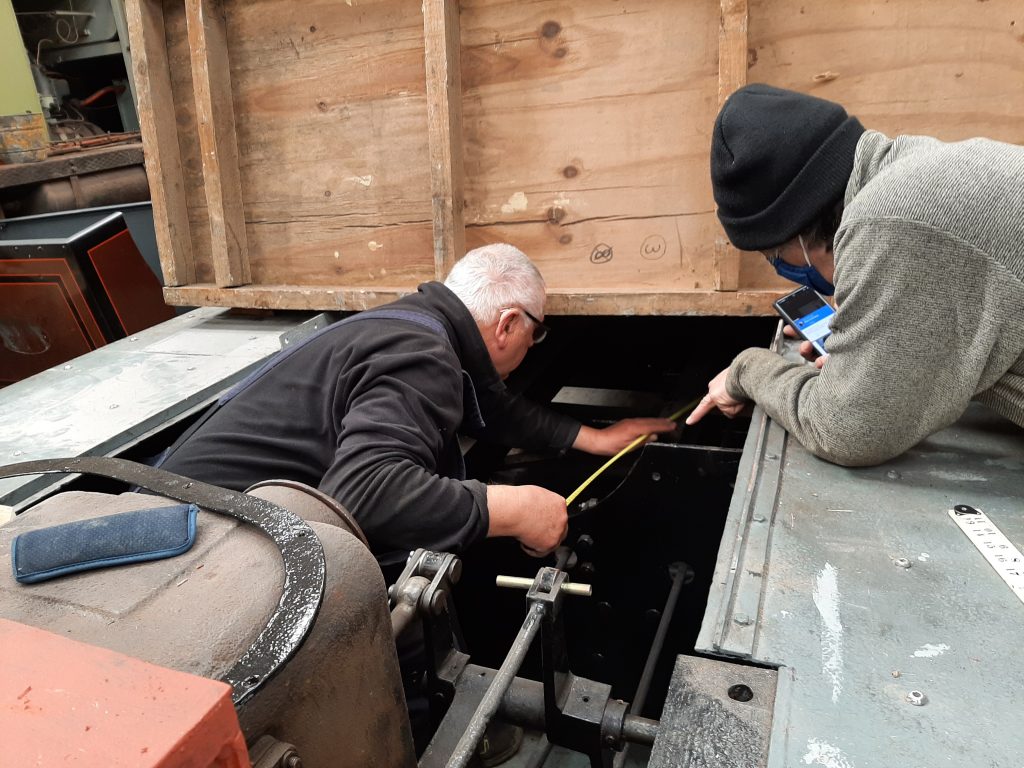 The ending of lock down will make it easier to search for and view a potential replacement engine for Fluff. With this in mind, John Davis and Mike Rigg have been measuring up the dimensions of Fluff‘s engine compartment. 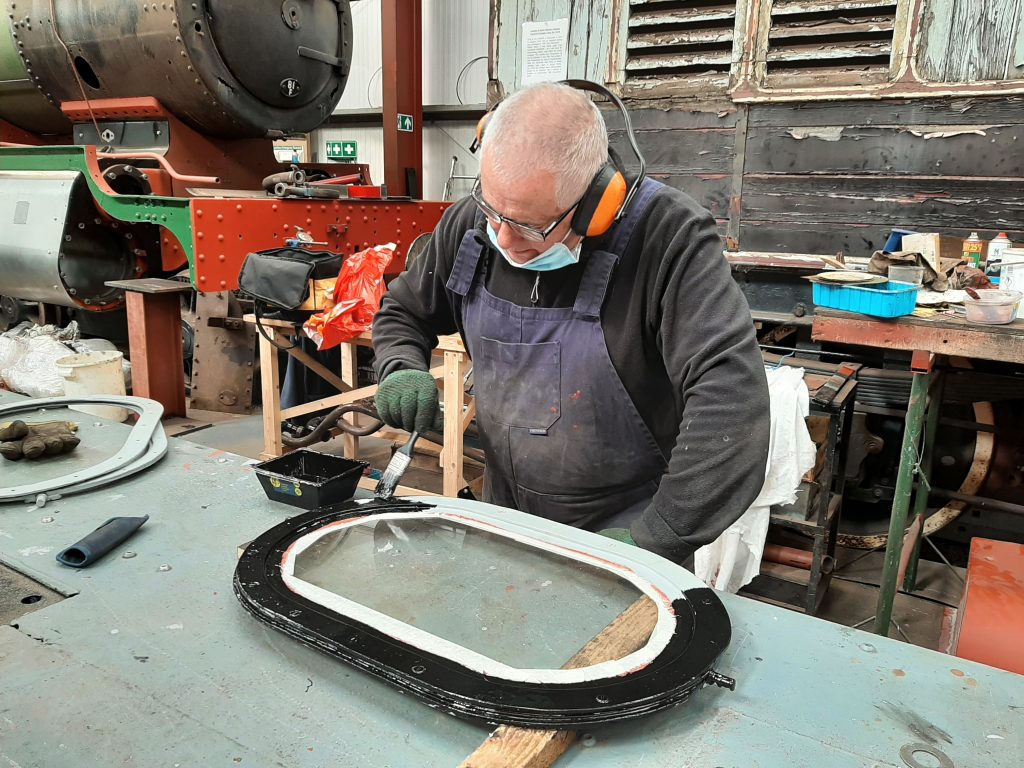 John went on to paint Fluff‘s cab windows, a job that has been put on hold for over three months. 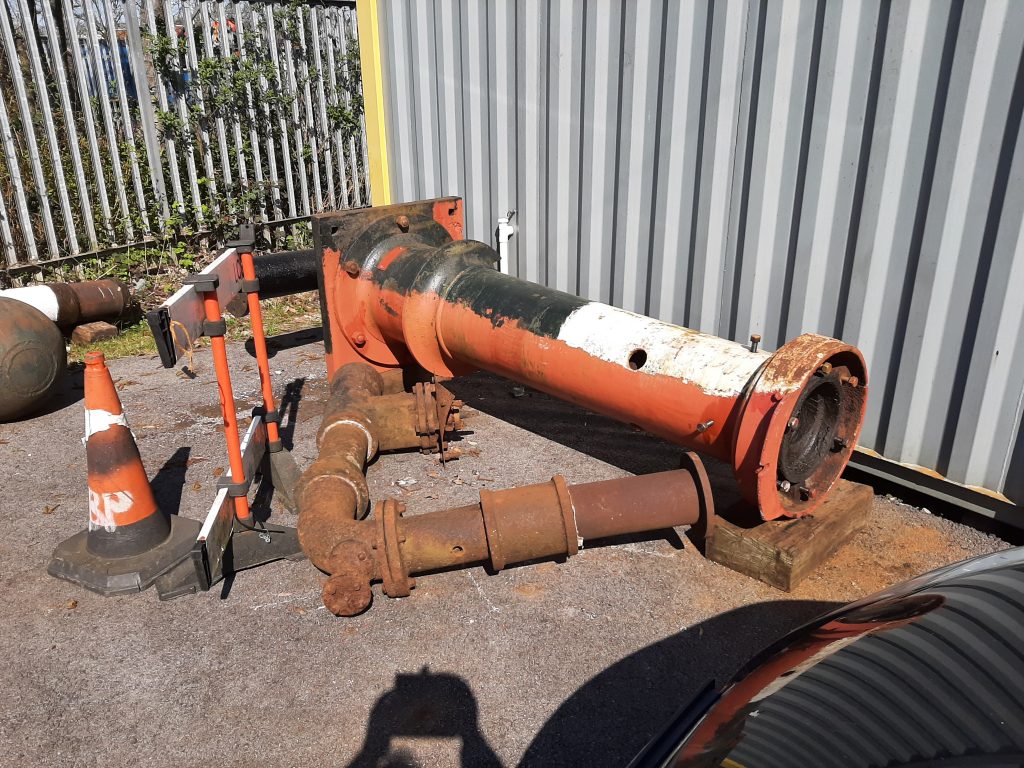 Finally, the components of the former Furness Railway water crane from Foxfield have recently been unearthed and placed outside the mess room in order for restoration to take place. 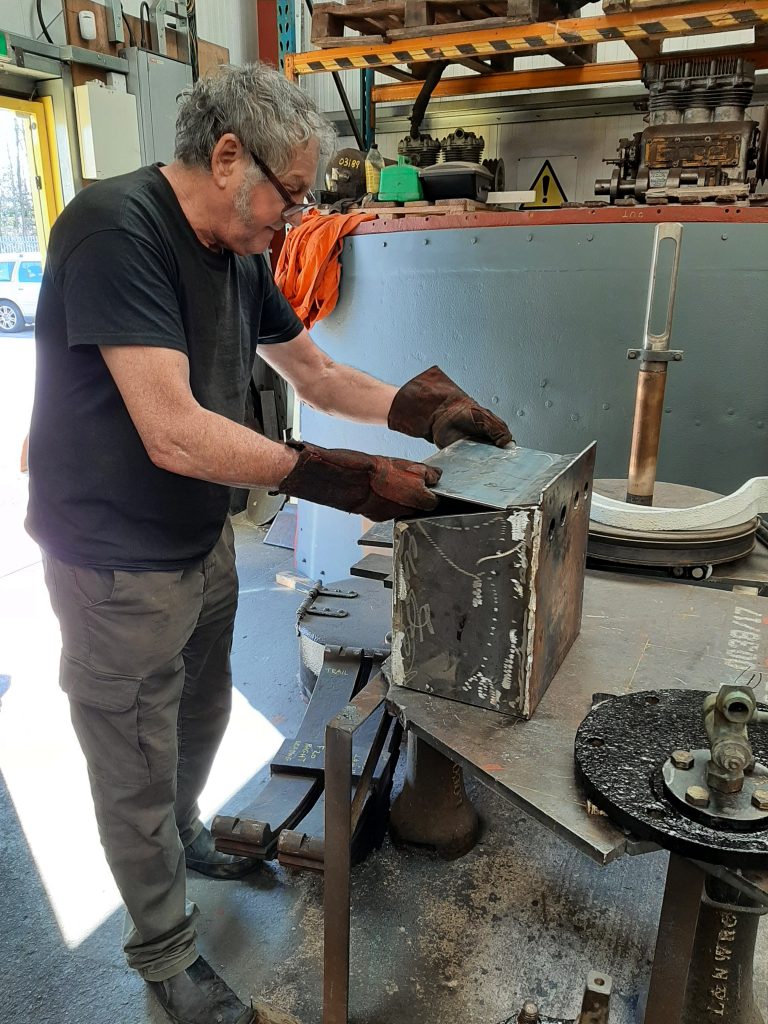 Keith has been busy making a replacement fire box for the water crane; these were fitted to prevent frost damage in winter.