After last week’s marathon we have a slightly shorter blog for you this week. It’s also the first to be published directly into the new home of this blog, using new software that not only speeds up the production process (hurrah say the blog team members) but also  makes it better for you the reader, especially if you view the blog on a mobile phone or tablet (hopefully, hurrah say you the readers). 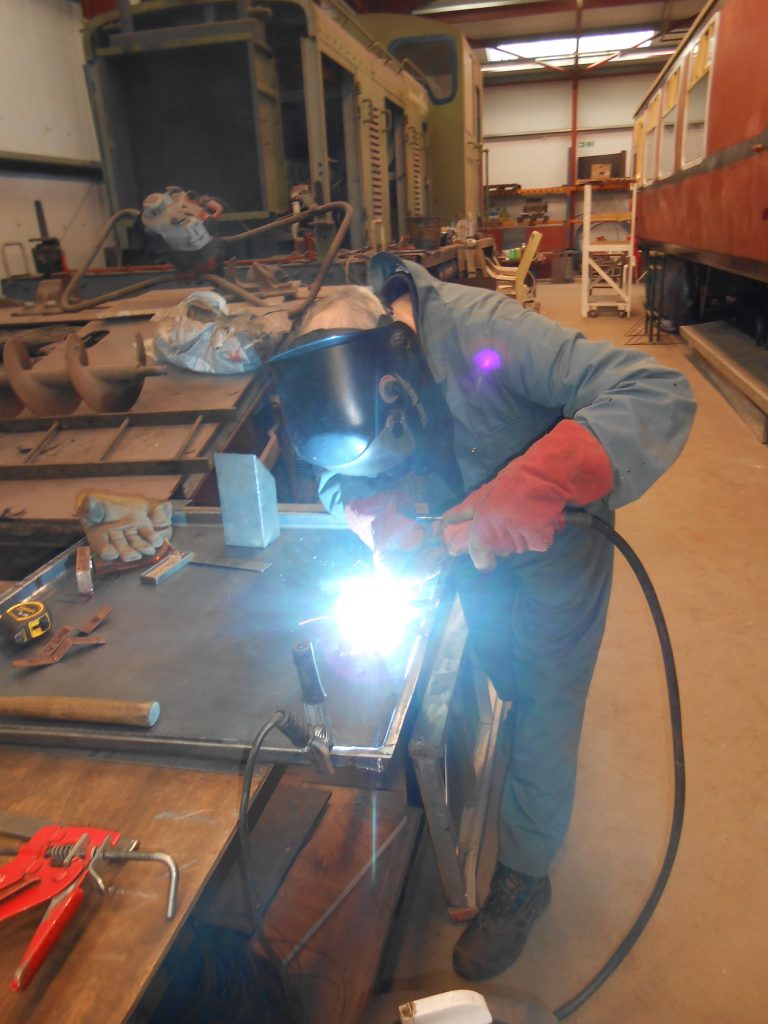 Work continues apace at Preston on the RMB as the finishing line is now just about in sight, even if it is still somewhat in the distance. John has been welding door handles on to the new gas box which Mike and Paul have been working on during the last month or so. The handles allow the door to be locked into place on the vehicle. 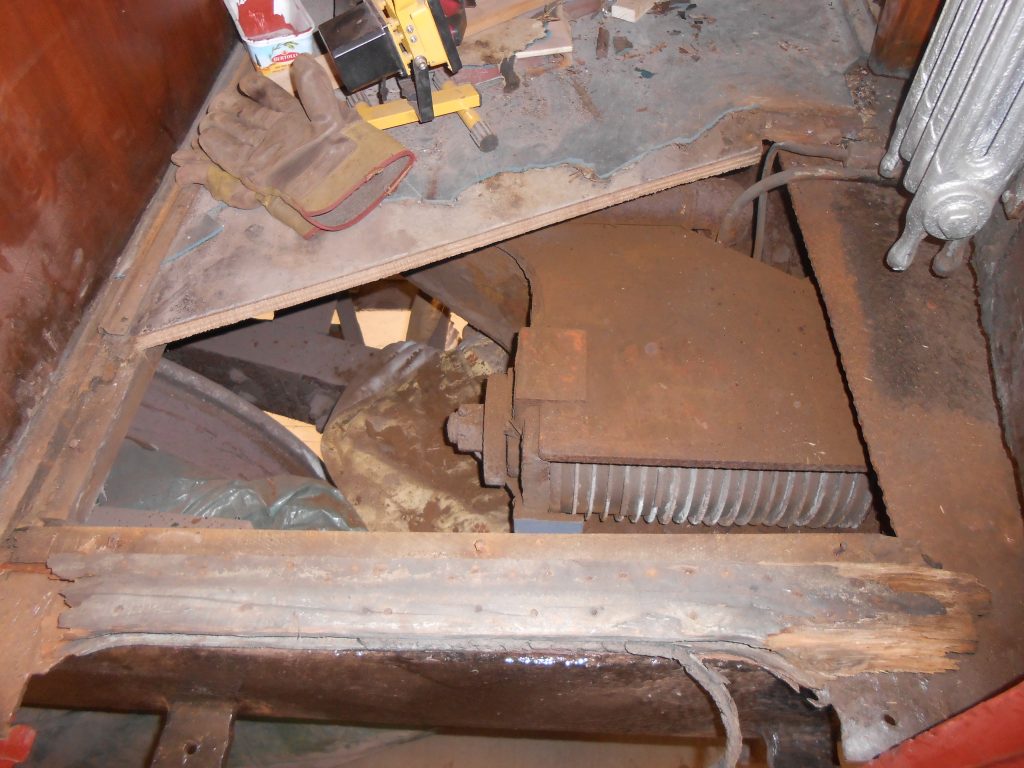 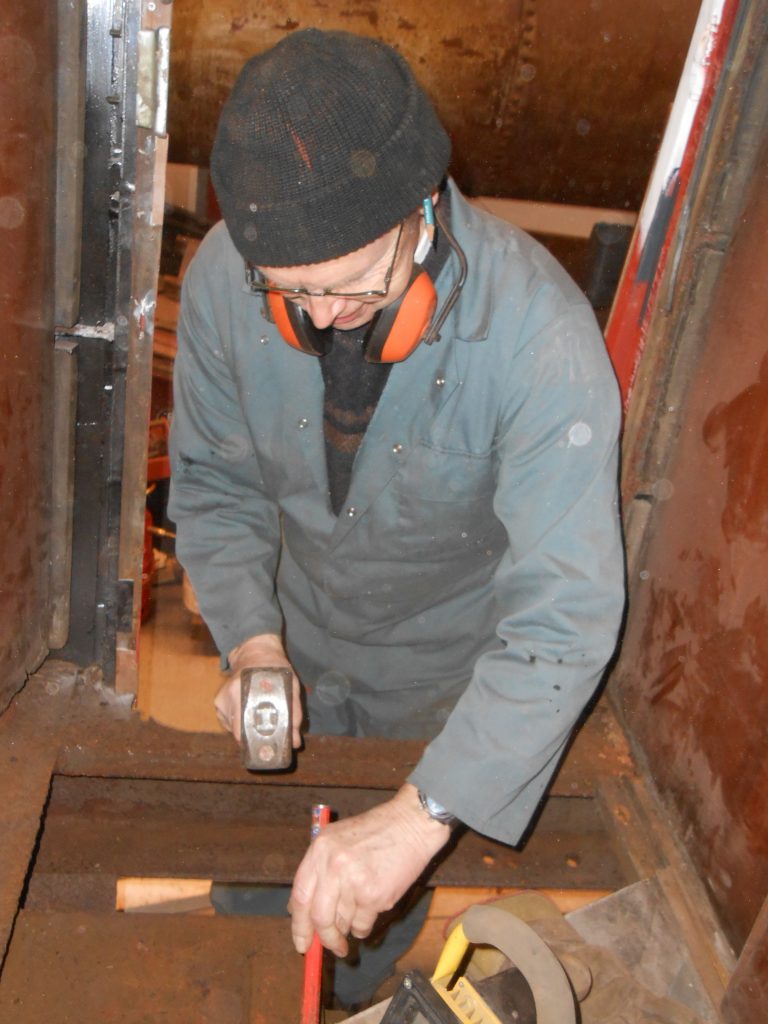 John has also been busy making a hole in the floor of the south facing doorway at the east end of the coach. John came across the rot in the wood floor whilst repairing the steel ribs at the corridor end. When the subject of this unexpected additional work being found so late on in the repair process was raised, John became very philosophical, repeating Donald Rumsfeld’s famous quote, when he was US Secretary of State for Defense (sorry, but we had better use the US spelling!) in February 2002, that ‘there are known knowns. There are things we know that we know. There are known unknowns. That is to say, there are things that we now know we don’t know. But there are also unknown unknowns. There are things we do not know we don’t know.’ That only leaves us to hope that there aren’t too many more unknown unknowns left on this particular coach! 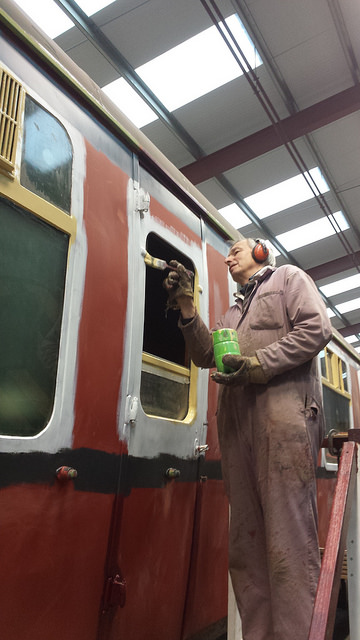 Meanwhile, with John still engaged on looking into the unexpected hole in the floor, Tim has started in earnest the process of painting the sides of the carriage, with some of the sliding windows and door window edges now sporting the final gloss colour of cream. On learning that some serious painting sessions were imminent, both Adrian and Fred have enquired as to whether they can have a few days off from making dust, with Fred rather fancying some extended time in the mess room brewing tea! Needless to say, it is to be hoped that there will be as little disruption to the dust making processes on Caliban as possible. The following photos show both Adrian and Fred hard at work on the frames and the eccentric straps. 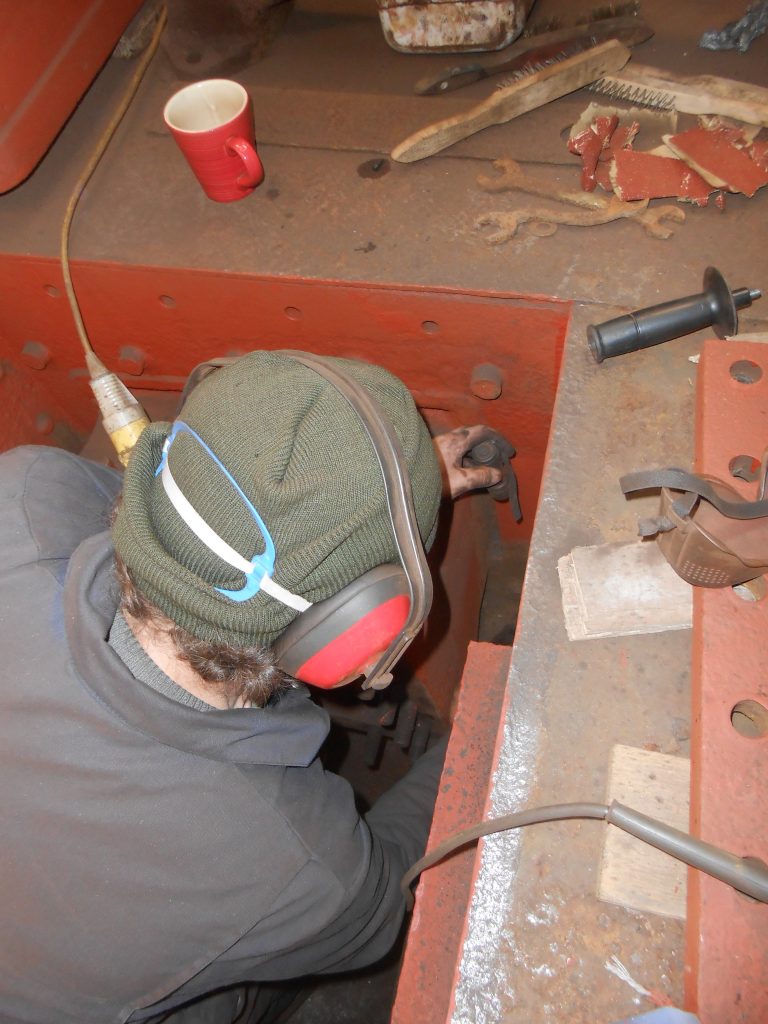 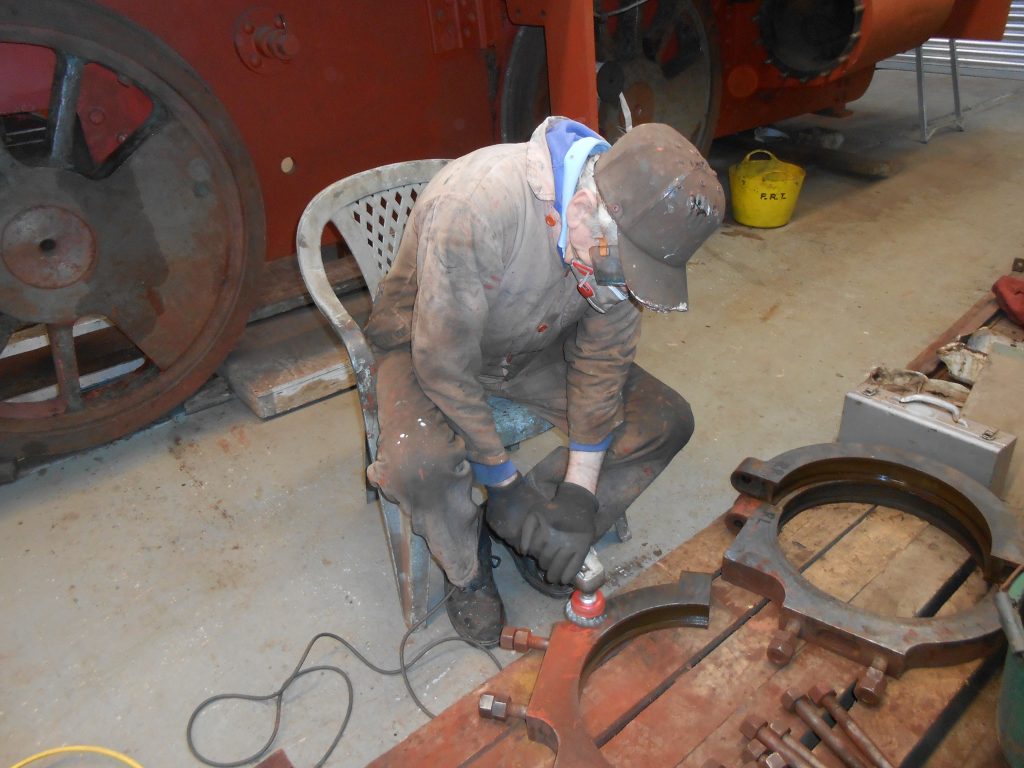 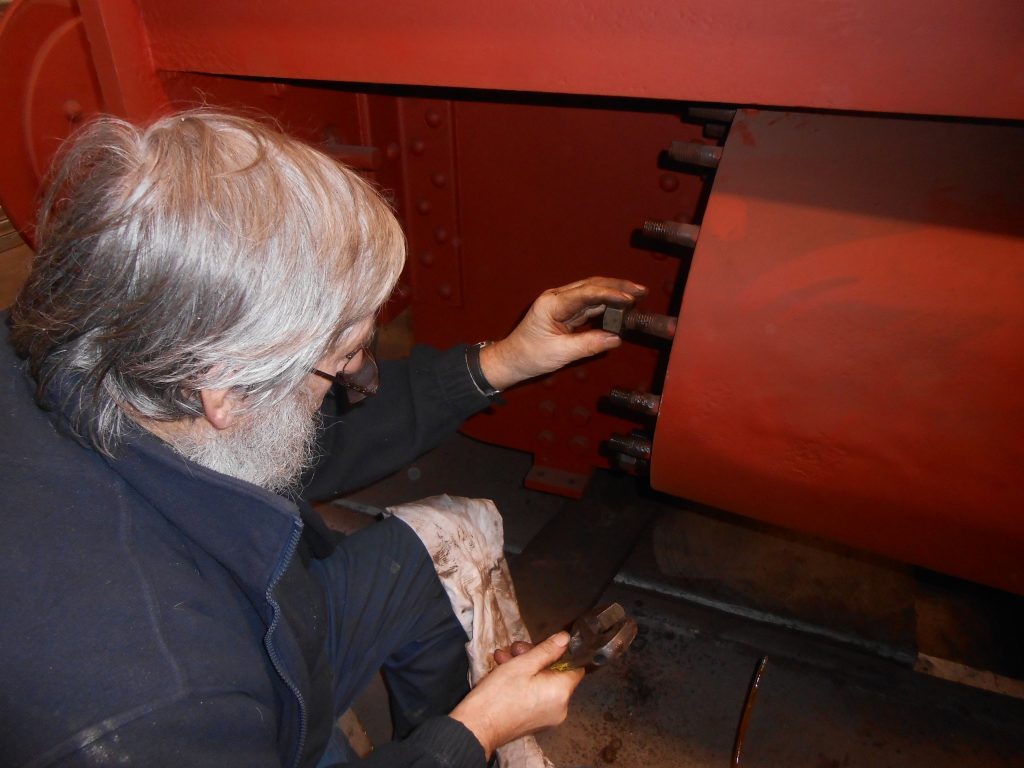 Alan, John H and Sam have also been at work on the loco, with Alan pictured here running a die nut over the some of the cylinder end studs. 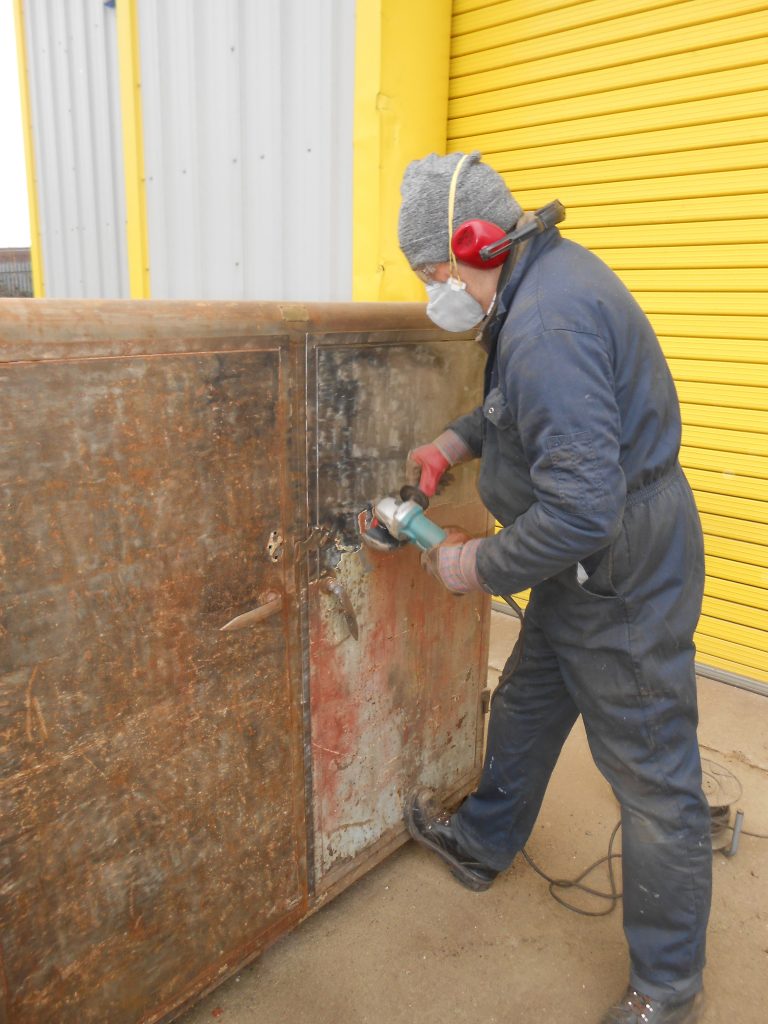 Outside, Mike has been cleaning up the steel cabinet which we intend to use as a paint store – this will become necessary as we move out the various cans of paint that have been stored in the RMB in recent years.

Further work on removing the tubes from Wootton Hall‘s boiler by George was planned for this last Saturday and it was also hoped to make further progress on the track outside the shed – we’ll report back next week. Looking forward to next weekend, Keith is planning another trip across to Embsay to work on 5643 and, therefore, Tim might well take advantage of an empty shed to get some more paint on the RMB.