It is with great sadness that we start this week’s blog with the news that Jean Dixon, wife of John, passed away on Friday afternoon after losing her fight with cancer. Jean was Membership Secretary of the Lakeside Railway Society in the early days and has always since been part of our wider family. We offer our sincere condolences to John, Andrew, Linda and Sam. Funeral arrangements will be published when available.

Last week was the run up to the Festival of Transport at Barrow, which this year was celebrating the 175th anniversary of the Furness Railway and at which at which Furness Railway No. 20 was due to make its first public appearance for three years. 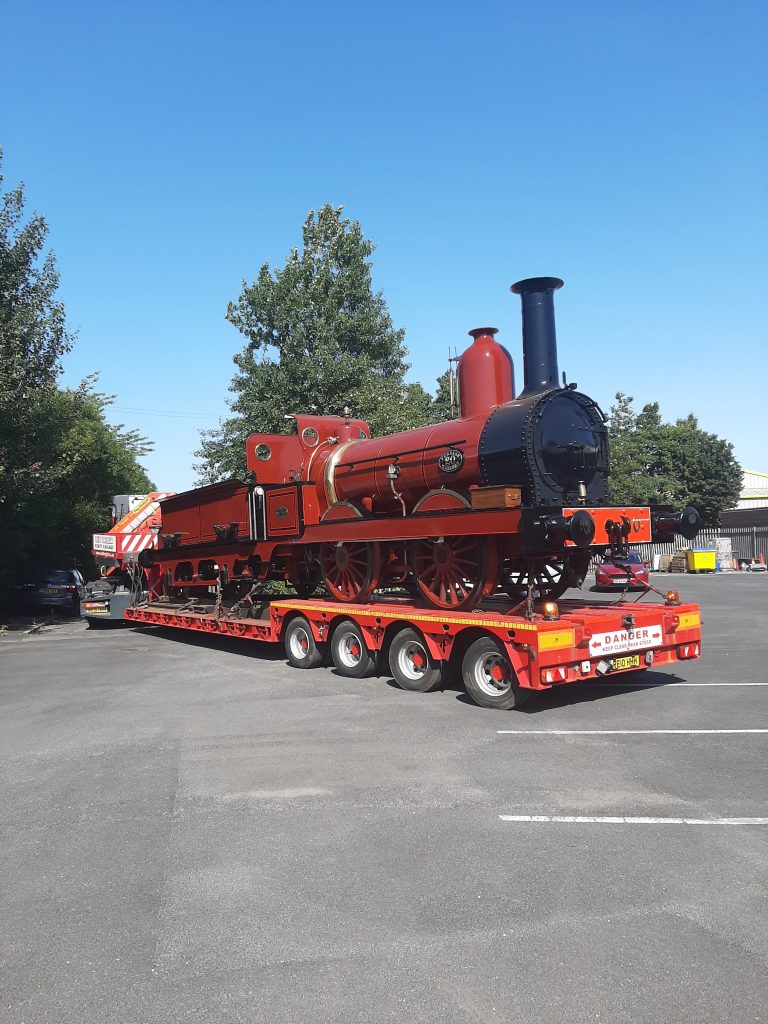 Simon Reid of Reid Freight was keen that this should be one of his more leisurely moves, as he had arranged for his family to be with him at Barrow over the weekend – rather a busman’s holiday! Simon appeared at Preston after lunch by which time Adrian had shunted FR 20 on to the loading road, which had been helpfully cleared by the Ribble Rail staff. The loco departed at 16.10 for its journey to Barrow and an overnight stopover at a secure location there – thanks to David Stubbins of the FR 175 committee, Wicks Waste Management and the Barrow Transport Group for their help. 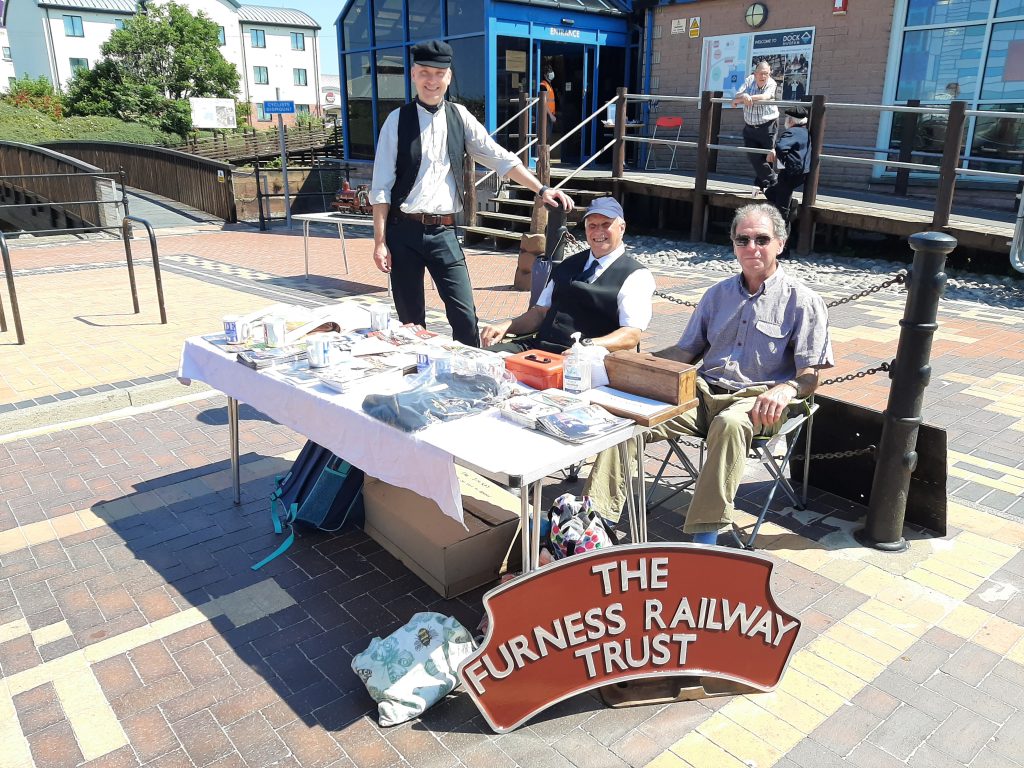 FR 20 was skilfully reversed to its allotted position behind the Dock Museum at 08.45 on Saturday morning with the sales team of Jim Kay, Andrew Furness and part time assistant Neil Smith turning up to set up the stall nearby the loco and with Peter van Zeller also making the trip down from Ravenglass to join in the fun. 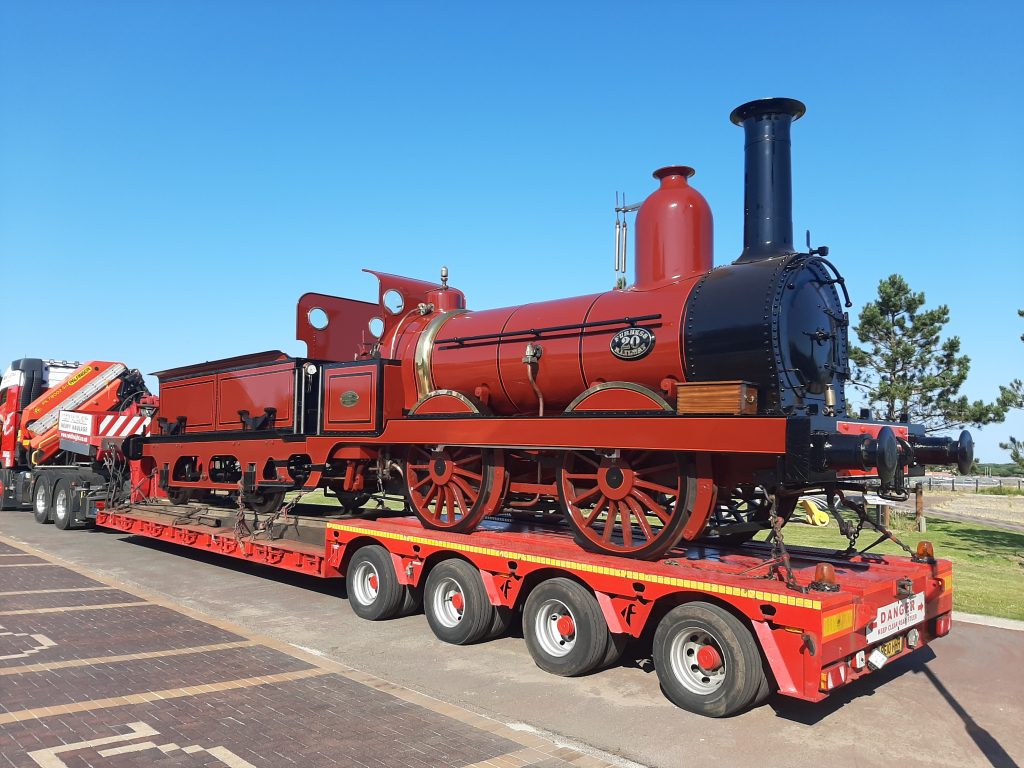 There wasn’t a cloud in the sky and everyone agreed that FR20 looked splendid in this historic and picturesque setting nearby the old Barrow graving dock. Certainly sun tan lotion was the order of the day! 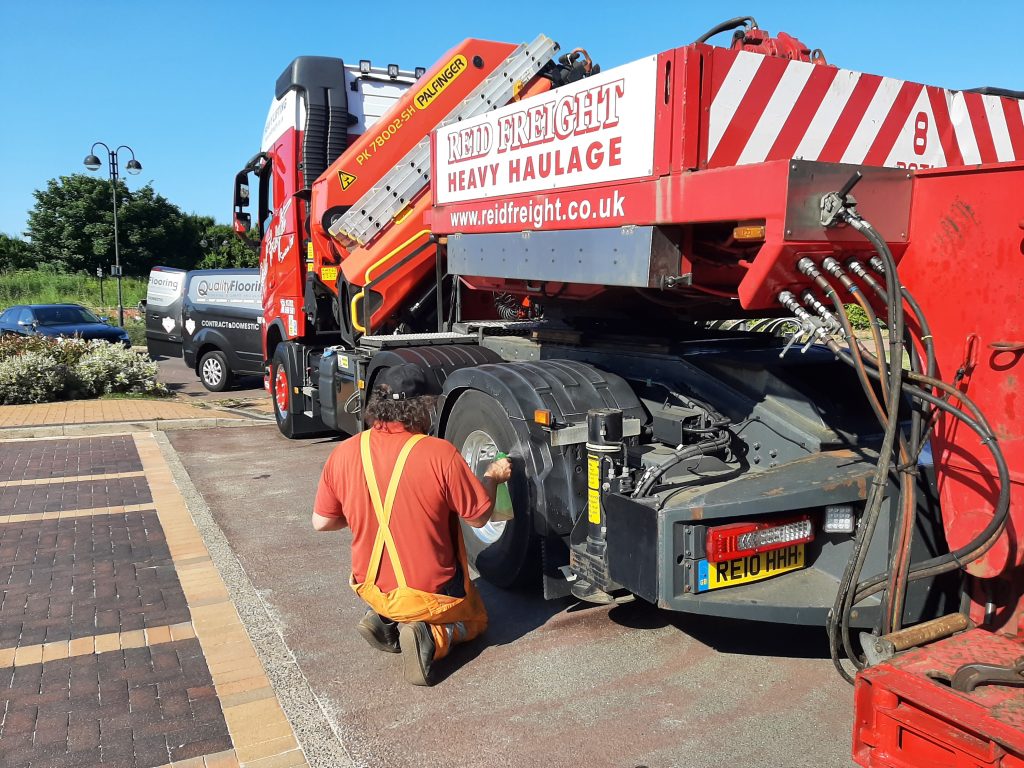 With such a sparkling loco on his rig, Simon was to be seen giving his lorry some TLC of its own! 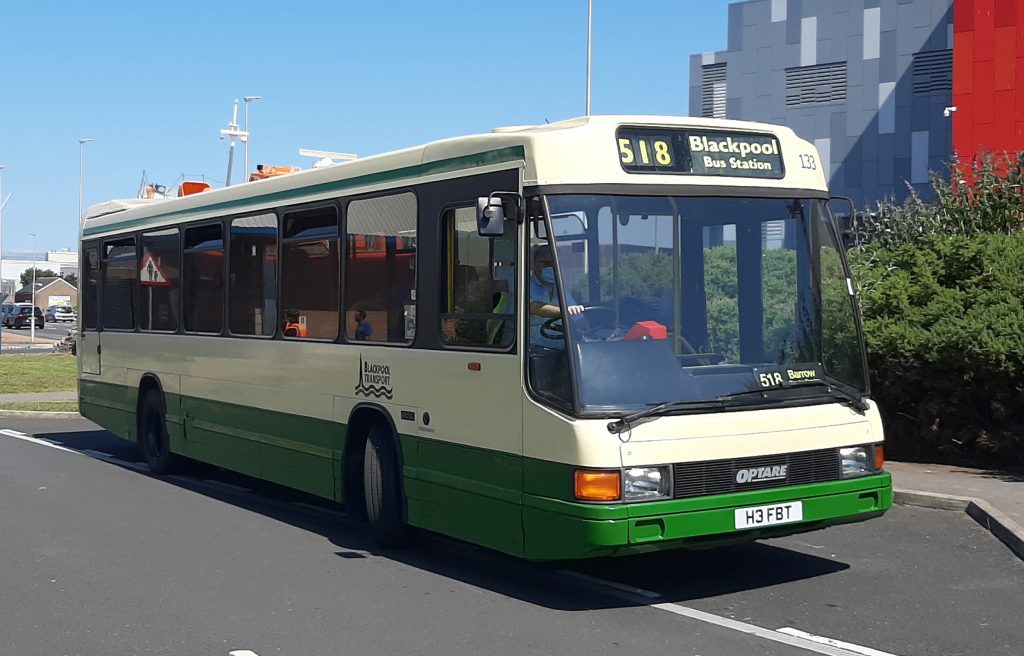 There was a well organised free bus service operated by preserved vehicles which brought new visitors to the site every 20 minutes throughout the day so, without being overrun, there was a steady flow of people who came to take photographs, chatted to us and bought souvenirs from the stall. 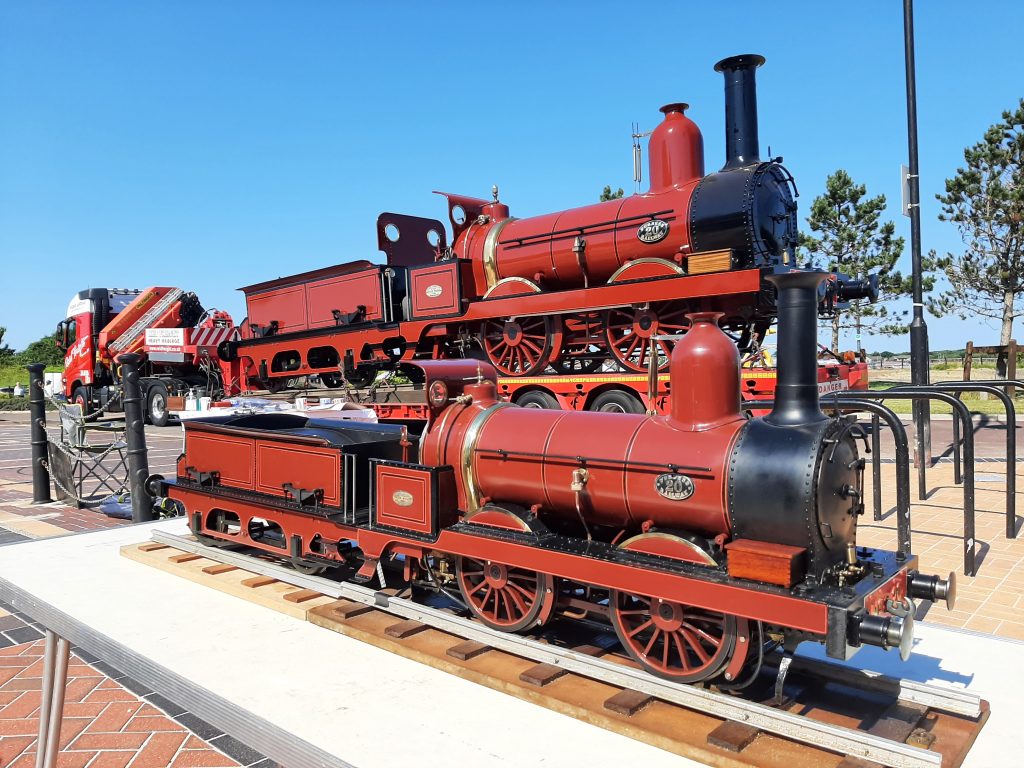 Tom Jones brought his beautiful 5″ gauge working model of FR 20 for it to be displayed alongside the 12″ to the foot version and which received many accolades. 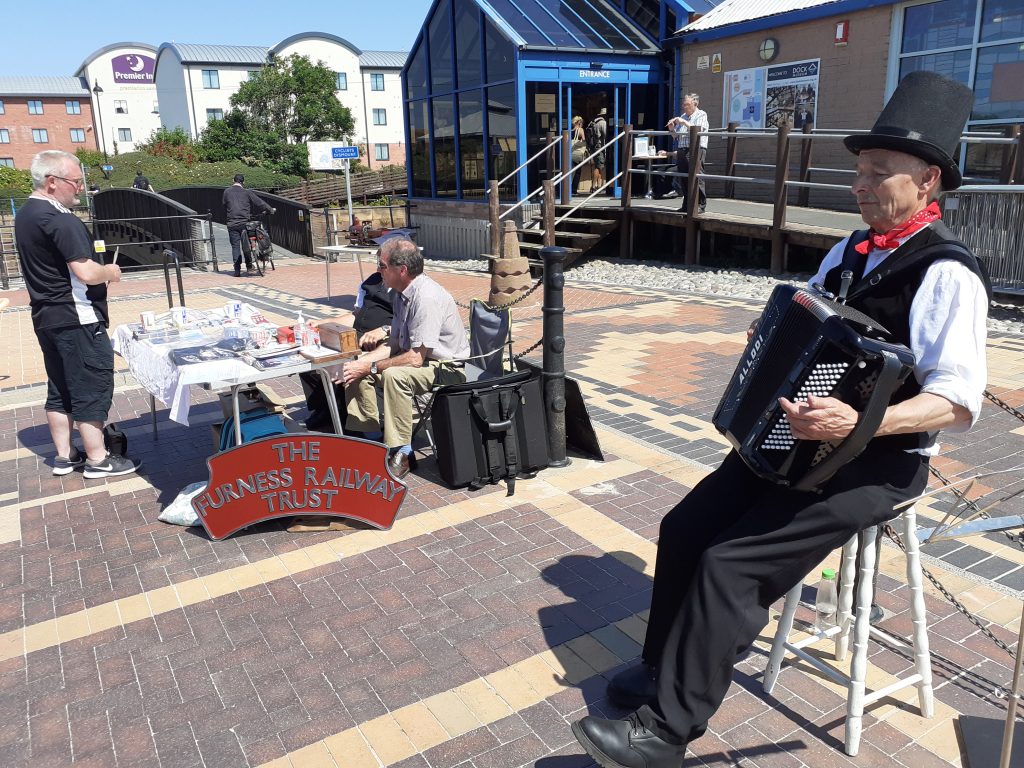 Nearby there were also stalls operated by the FR 175 committee, Community Rail Cumbria and the Lakes Line Rail User Group amongst others. There were children’s entertainers and, in the afternoon, Tim took the opportunity to reprise some of the songs from the FR 150 road show The Iron Road.

One of the great things about the day was the opportunity to meet up again outside and also to catch up with the many friends who came to visit throughout the day, most of whom we hadn’t seen since before the first lock down. 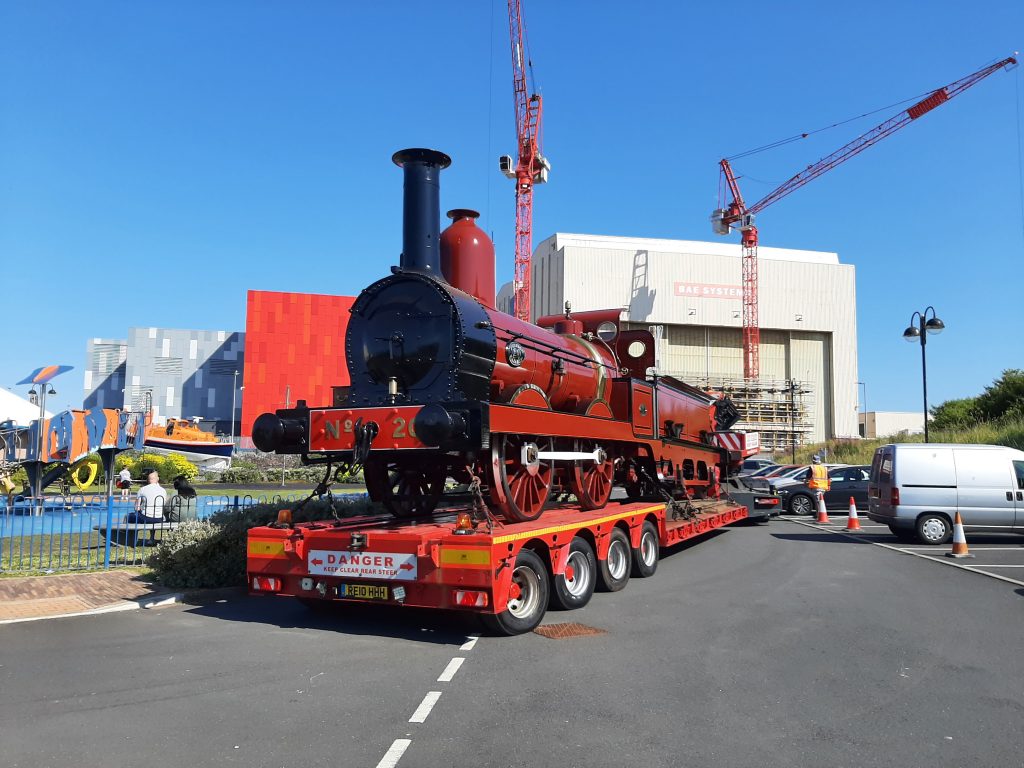 All too soon though, 16.00 hrs arrived and it was time to pack up and then wave goodbye to FR 20 as, with a farewell toot on the Reid Freight horn, it left the site by the towering Devonshire Dock Hall of the shipyard, where FR 20’s restoration took place from 1996 to 1998. All in all, a very successful and memorable day at a very well organised event.

We are pleased to be able to report that Ade was once again on hand at Preston on Sunday to shunt FR 20 back into the FRT shed. It only remains to thank everyone who prepared the loco for exhibition, special thanks to Ade for undertaking the shunting, Simon Reid, and also the sales team for their efforts. We leave you with a topical photo taken by Ade last Wednesday which we hope you will like: